I would like your opinion on how I should make the Heretics for the Choas Legion. 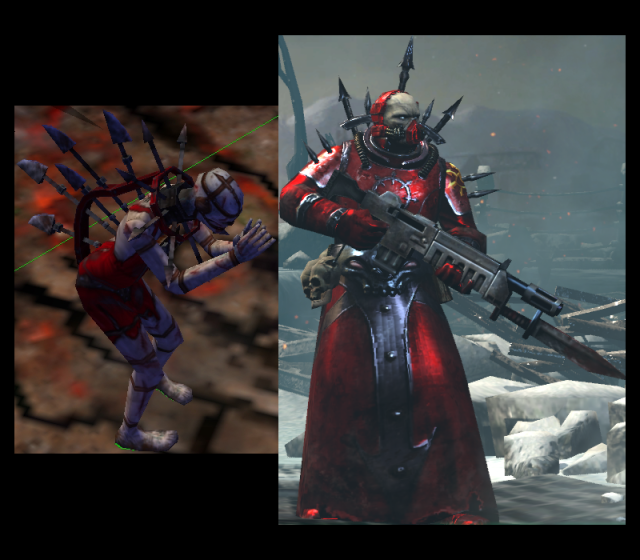 Why not make make the builder be the original Heretic, just re-named to something like Chaos Slave, and have the DoW2 Heretic become a scout/meatshield unit with the name of Cultist or something?

You know what? I never even thought of that... I like that Idea. Looks like they will both make an appearance! Thanks for the suggestion.

Or something like 2 versions of the Heretic, like "Heretic Slave" being the builder, and "Heretic Cultist" Being the scout/meat shield.

Yeah the Slave could be useful for certain abilities too like special upgrades 'sacrificing' him to make something or summoning etc. and the DoW2 heretic being both a builder and a weak soldier. basically their recon and builder duel role.

Or you could make it so the slaves build and the others are the basic combat troops that are used.

Untill they 'progress the tech tree' in other words they summon more chaos forces.

The slave was most useful for one thing: Forced Labour.

I think what we will do is have the Heretic (left) be the base building unit. Then the Heretic (right) will be the Cultist unit that serves as the scouts and "meat shield". The Cultists from DoW do look very similar to these guys anyway.

the "heretic" on the right IS a Cultist.. the one on the left is a heretic..

Hmm. According to some of the Imperial Armour books, most 'Cultist' soldiers were pressed into service under fear of death from Enforcers(A chaos version of Commissars) and true Chaos believers. So, Heretic Engineer Squad and Heretic Militia Squad or something very plain like those would probably be...well, best.

Okay, i have a some info, #1, name the one on the right, heretic warrior, and the one on the left, heretic. As the normal heretic is simply used as a meatshield while the other one is used as an actual infantry unit, (but still not with much particular value). #2,also (as you most likely know) heretics look different depending on what god they worship like, a khornate worshiper looks different from a slaaneshi worshiper, so i would recommend you make skins accordingly.

lol, and i forgot, most heretic cultists wear no armor and carry autoguns instead of lasguns and a large sum of them are turned guardsmen (as they are highly easily corrupted by chaos.)