I'm very happy to announce that the latest Call of Pripyat: Reloaded installment is now online, after almost 6 months of hard work. It has been long, I know, and thanks again to everyone who has helped me to achieve this, and to those waiting for it.

I've added a lot of new features this last month, including a script modification (thanks to Smurth) which forces the main character to holster its weapon for 2 seconds when using medpacks or drugs. New side effects have also been added to the medication. I also tweaked the A.I. Additions mod that, in addition to drastically improving the A.I., allows NPC's to use grenade launchers, to choose their weapons depending on engagement ranges, or even to go on melee attack, knife on. NPC's can alose knock you out, steal your weapon, manage their own backpack, go stealth, cover themselves,... Finally, I made some slight adjustements in order to fix a few remaining bugs form the Vanilla game (mostly with widescreen textures). And I also added specific scopes for sniper rifles. 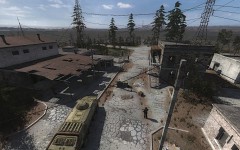 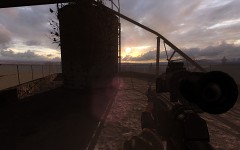 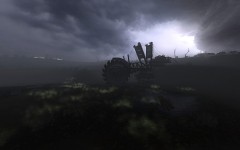 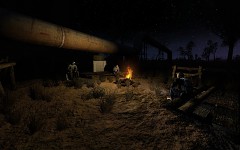 However the main change in recent months is on the graphics level. Almost every
game textures have been reworked in order to obtain a far more beautiful AND more fluid game environment. I widely used the Atmosfear 2 mod that increases viewing distances and introduces more natural colors while not neglecting the oppressive atmosphere of the Zone (by the way,
you can expect a few surprises !)

There are still manyaspects that have been changed, as almost every single sound effect, or game balance is now longer and more difficult. I'll post an exhaustive list later, I promise. But for now, I have to catch up on sleep hours I've lost. Hu hu. So, good game !

Nice update! The level of graphical enhancement in this mod is incredible.

looks like i'll have another play through of this game, thx looks amazing!

Going to reinstall Call of Pripyat just for this mod!

I've posted about the update here, Modsentry.com keep up the amazing work!

Just got the mod running this morning after a fresh install. Not only are the graphics awesome, but I also gained an FPS boost and greater game stability. I highly recommend this mod.

Has any Stalker games involves AI actually using sniper rifles? In a balanced way that is.

If a sniper doesn't exactly know where you are, they'll aim their sniper rifle in the area and "survey" your location, meaning you'll see a red laser moving around near you. Once you run out of cover, you'll noticed the laser suddenly jerks and he tries to aim at you with it (thus the laser will chase after you). It's possible for the sniper to not spot you and continue to survey your last known position, and as usual, if they don't discover anything for a period of time the sniper can call off the surveying.

Marvelous news ! I never tire of the COP chapter and I'm so glad that there's so many of you guys working so hard to make each of my return visits fresh and satisfying. Thank you.

Beautiful track in the demonstration video too. What is it ?

My game crashes whenever I try to load a new game; any immediate crashes people know how to fix?

just a warning to fellow dx11 users. you will see a massive performance game if you shift to dx10 when using this mod BUT you HAVE to change the dx mode BEFORE you install the mod otherwise graphical glitches will occur. however when this happened to me i had choosen to load a saved game from a dx11 file using this mod when i had changed to dx 10 the main menu was severly messed up and when i did this i lost all of my ingame icons BUT i also turned on FRAPS to measure framerates so maybe this mod doesnt like fraps either?. lol once i fixed the gltiches and loaded up the game with a fresh dx10 setting the graphics looked amazing and the game runs great. i recommend this mod to anyone who would care to try it.

Is this in any way compatible with RCOM for Call of Pripyat?

call of clownfeet and unrealistic, therefore suspension of disbelief breaking, gear and equipment.

model them from real life examples, how hard is it? you live in russia.

looks amazing, now i finally have a great reason to re-install CoP!

Looks fantastic on the screens. I only wish my gfx card can make it ;)

The sights on the SVD when scoped in is way off, its impossible to aim at anything.

Also, the sights on the G36 is mirrored :P

This is a compatibility problem, i have only add 16:10 configs for the sniper scope, i try to fixe it.

The texture size for 16x9 is incorrectly specified in Gamedata\configs\ui\textures_descr\ui_ingame.xml

I fixed it on my system by altering the wpn_crosshair_sniper's width to 2048, as suggested by Cromm Cruac for his Absolute Scopes Texture Pack v1.2.

Fix the lines in ui_ingame to be:

Tested that, it worked, wiped out everything within 500m of the scientists' bunker with my now-working dragunov to celebrate!

the game gets f'd up when i try to change my graphical settings...

i extracted the mod to my stalker directory (g:\\games\S.t.a.l.k.e.r. COD) but i haven´t noticed the mod to be active. did I anything wrong?

thank you in advance

I see the infection of improper naming is spreading, so do not think that I am only after you. I will be asking everyone I see to please stop calling textures HD. HD is High Definition, which is a minimum of 60 frame per second which is totally controlled by the screen refresh rate. Please call them HiRes if there are more pixels than regular (400%+), or if they are retexture using real world samples then call them that. HD means nothing with video games since all games are start with the ability to technically be HD - 60 FPS minimum is common with a Vanilla game.

One question - you say that you tweaked the Atmosfear textures but only used 512² (due 32-bit system limitations). What does the game only running in 32-bit have to do with the size of textures you used?

I most of the AI changes sound great! I cannot wait to merge this with my own gameplay mod to see what the effect is (just for personal use).

Hu hu sorry this is my bad english, in french " HD " is " Haute définition " and can be good for a texture size or a video. Thanks for pointing this. ^^

For the Atmosfear textures my game doesnt start when i use 1024² skybox, so i presume this is because i have 32-bit system. This will be better to read the " Atmosfear 2 " FAQ for more informations:
Moddb.com

And for the AI most of the changes will give by the A.I addition created by Bak, i have just tweaked this mod.

Before you start your pedantic crusade of righting 'wrongs' you should perhaps find out if you're right.

Your English is easily understandable. Haute Définition = High Definition which only means 60 FPS+ it does not have anything to do with the textures. There are a lot of people that started using that term over the last year, and the more it is used the more confusing it will become. Some call my HiRes work HD, others call original textures with noise maps applied HD, and others call total ReTextures at HiRes size HD. It basically being used (inappropriately) for everything and quickly loses all meaning. The highest quality are ReTextures and then High(er) Resolution or HiRes (at least double original dimensions).

I forgot that Atmosfear uses skyboxes. When I added CC's mod to mine, I did try 1024^2 but there was little improvement so I just used two of his and some of my own.

Any improvement to A.I. is good regardless of where it came from. After I take a look at what you did (as I merge it with mine), I might have a few suggestions for you. I made some A.I. advancements with my mod, like enabling people in the 'safe zone bases' to shoot at enemies. If you do not have that in yours I will PM you with the info so you can use it if you want.

I've just downloaded Reloaded v0.7, and I must say, i'm impressed with the graphics. They are much better now, 10/10 for your mod ;D

I haven't had the chance to DL this yet, but once again the screenshots look beautiful!

I have a bit of a problem. Every time that I die and attempt to reload a save the game crashes. THe strange thing is this only happens AFTER I've died because when I start the game and load a save there is no problem. If anyone has any insight on this issue please tell me because it's a bit of a bother having to relaunch the game every time I die.

All work and no play makes V3n0m a dull boy, at least until this mod DLs and installs XD

Also, since my mouse is f**ked up, I need to use a trainer to help me get through tough areas, but none of my trainers work anymore T-T. Can anyone help? If anyone has a trainer that works, just PM me where I can DL it please.

Couple of things, though:
- Scopes: (the lines on the PSO are soooo close together sometimes i don't even know where to aim)
- HUD: default hud could be smaller

... the damn NPCs loot faster than me... leave that corpse alone!!!

Am I too dumb? I don't get how to install the mod. Simply putting a folder into a game direction isn't a mod installation. What's meant with "extract the gamedata folder"?
Plus when I replace the fsgame.ltx the game won't start at all. I have the newest version avaiable on Steam.

I tried it many more times, but everytime i replace the original fsgame.ltx the game won't start. Even if I change the .ltx manually, it crashes. Replacing the old fsgame doesn't help, I have to reinstall the whole game.

I can't post a bug report, because when it crashes my mouse cursor disappears due to a graphical error. I have to navigate the task manager by keyboard to end the crashed Xray Engine.

My system is a Core2Duo Laptop with 2,4 GHz 4 GB RAM and a NVidia GeForce 8600m with 256MB VRAM, running Windows 7. Any known issues with Nvidia drivers?

I'm very sorry about the crying, it was a problem with my extraction program. I tried another one and now it works.
I can report better graphic effects with the same settings as in unmodded CoP= Better graphics, no framedrops. Thank you!

My game is still crashing everytime I move from Zaton to Yanov. Only started happening after basically finishing all the quests before Pripyat :/. I really do love this mod but I just wish this issue could be fixed since it seems a bit common.

Hi,I recently test the mod Reloaded 0.7 with Atmosfear 3,but I'm having trouble trying to get to work.Could someone kindly help me?

Ok I have a problem and don't know how to solve it
I can only use static lighting because of old hardware and 1650x1050res
when I start the game I can't see the icons of anything in my backpack, why is that and how can I solve it?? help? please? (they are all transparent)