"Black Zones resemble an alien world. Like Avatar on an acid trip"

Is it August already?
:Hides:

Ok ok, I'll feed you a few updates. Scraps, ya hear me! Nothing more!

First off, Pizza Atomica has been able to get us numerous new concepts including Black Zones, GDI's Hover MLRS, and more. Also JPNyt (Hey! That's me!) has concepted a few pieces of art to give the setting of black zones.

Remember to follow all the newest updates at Tiberianeclipse.com 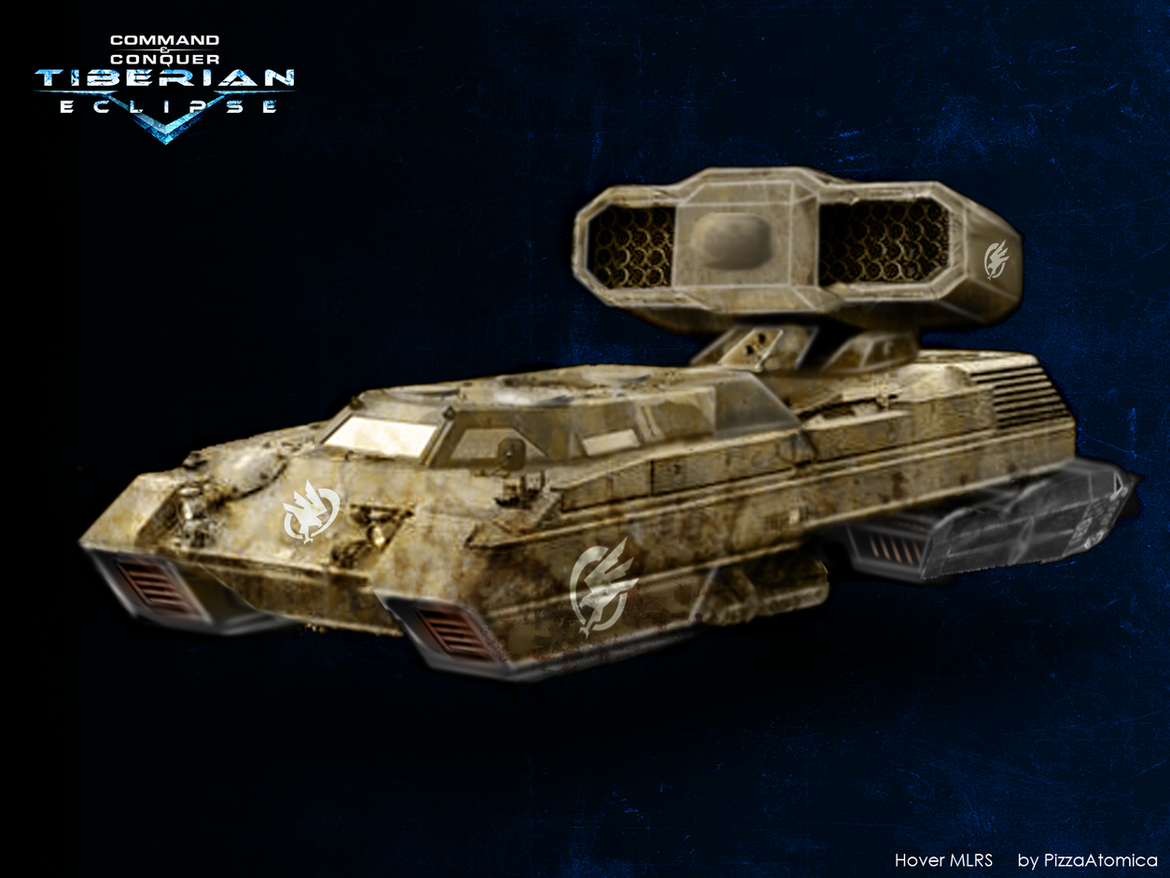 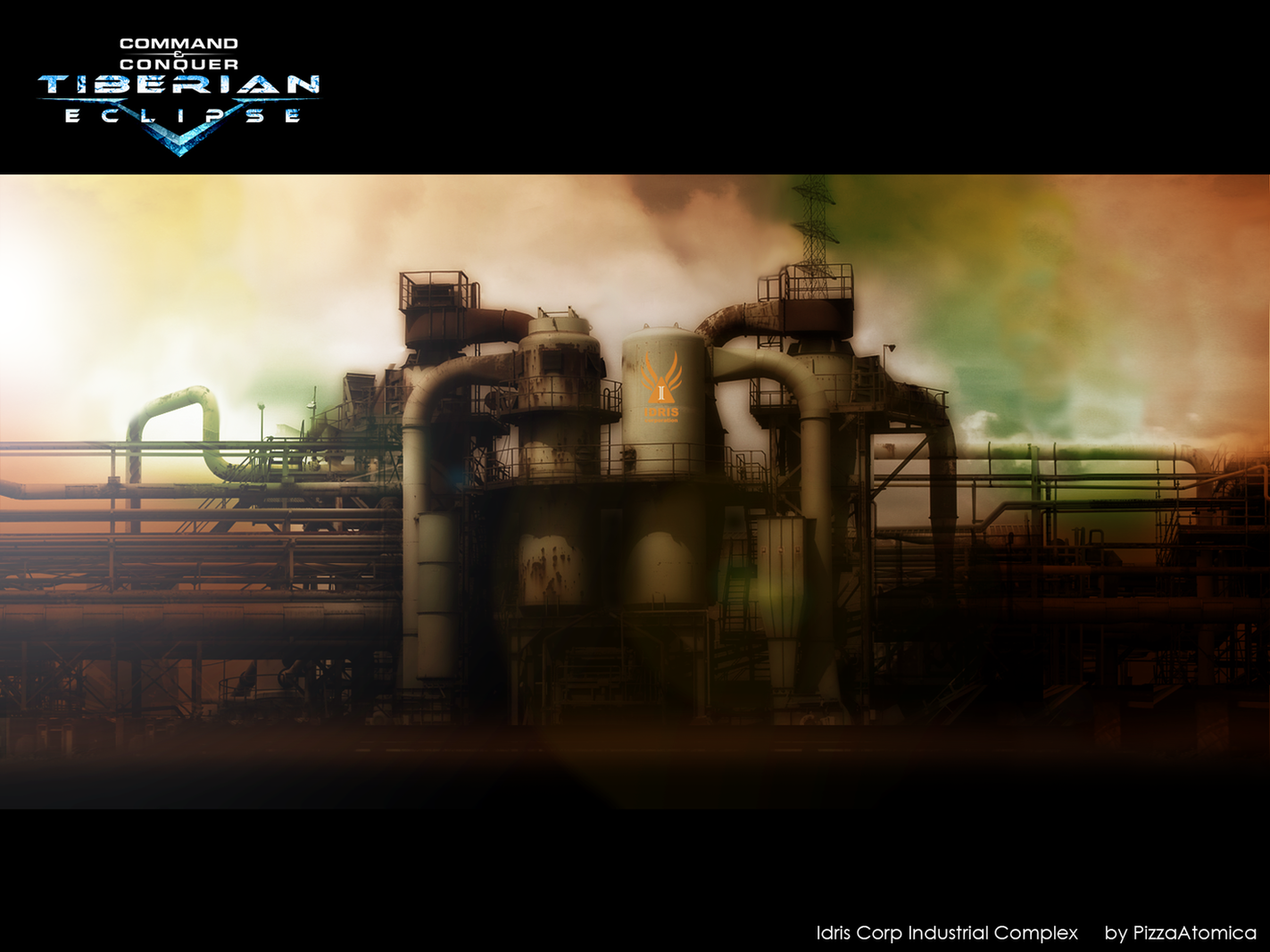 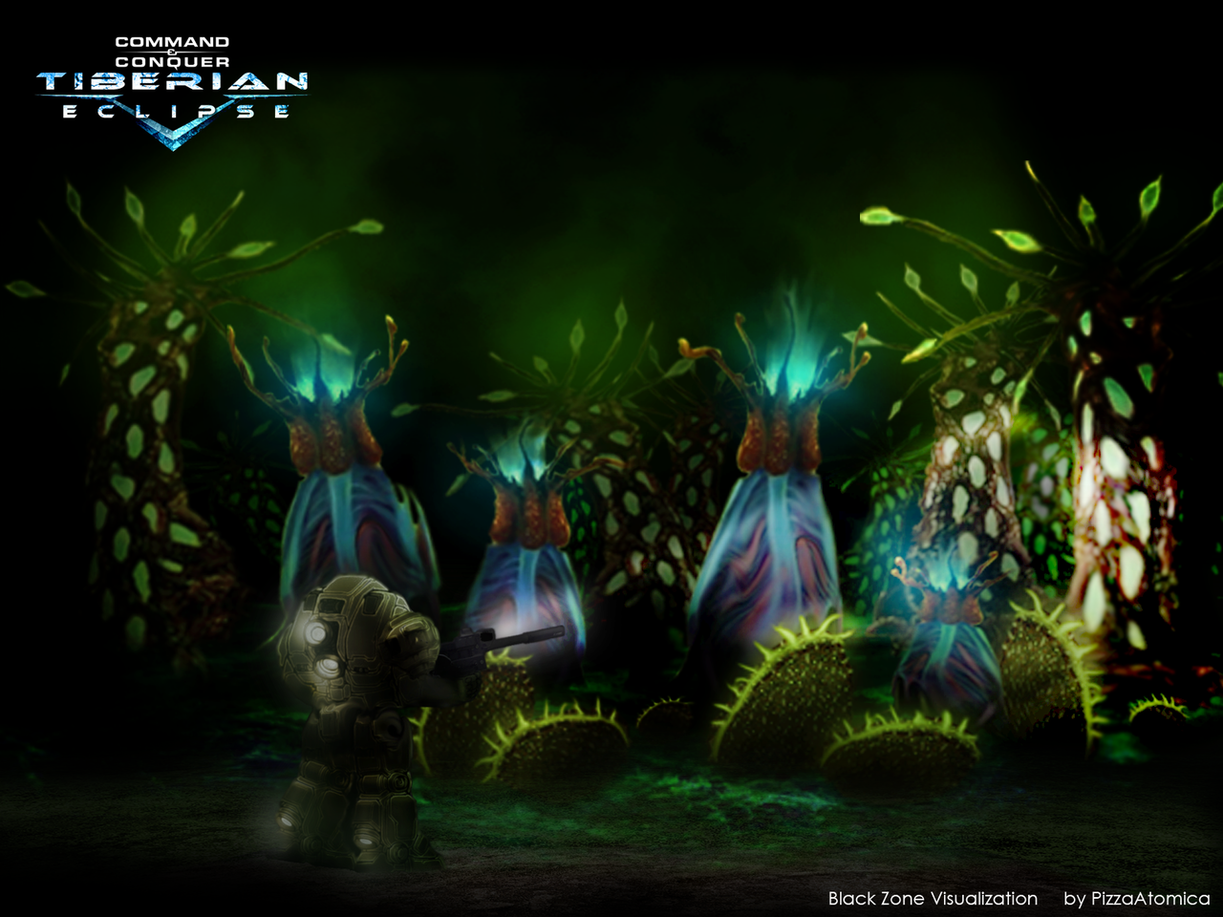 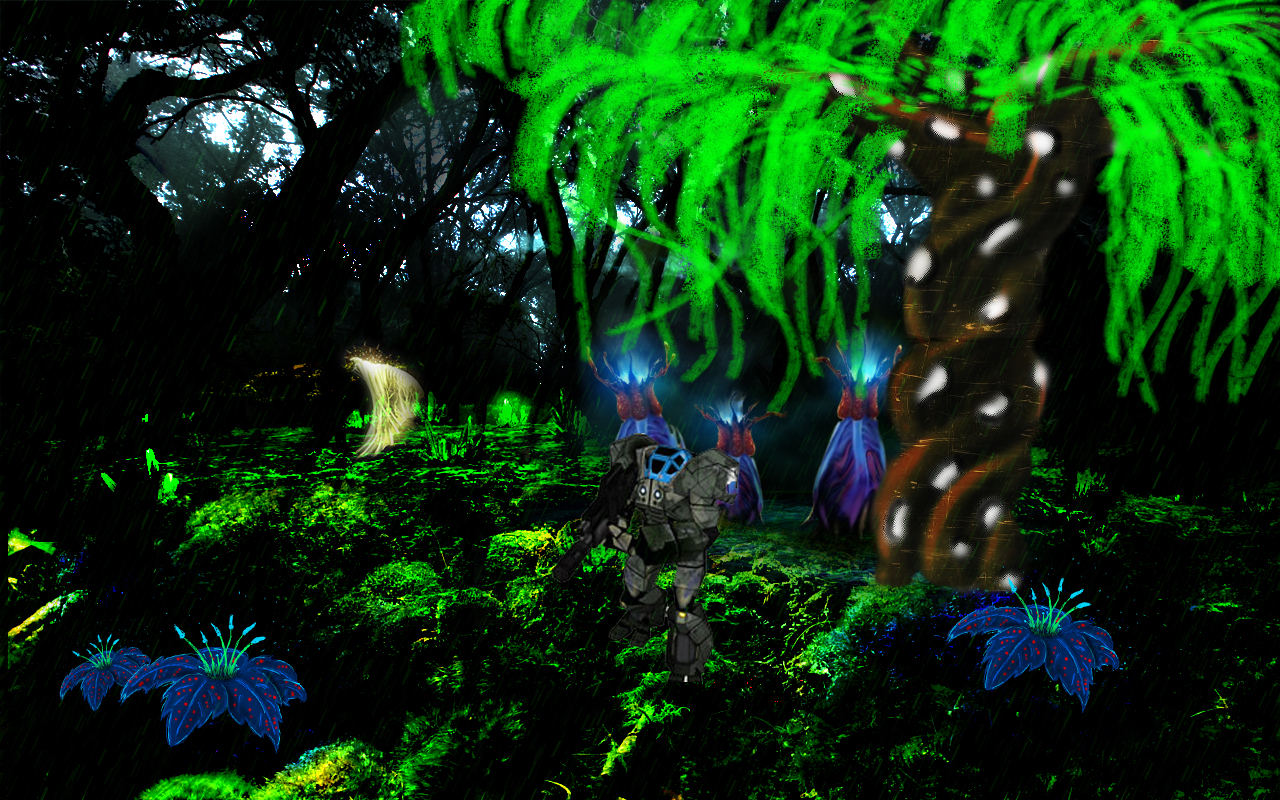 Black Zones Defined (from the forums):
Black Zones resemble an alien world. Like Avatar on an acid trip. They would resemble a rain forest setting. Mossy ground, formed from decayed tiberium, trees that are bioilluminescent and have tiberium crystals on them, veins & vines running in/across the trees (and yes, the trees on the left are different from the one on the right (sketched one)). Where the moss doesn't cover the ground, you would see cracks/fissures glowing green from tiberium embedded in the ground. The atmosphere would be primarily ion storms, though not always lightning.

The clouds would be a dark orange/greenish color, depending on A. The ionization levels / or the amount of tiberium toxicity. Yes, it is raining (and this is what I meant earlier when I said tiberium rain). The rain is a green hue from the tiberium gasses that have been evaporated into the atmosphere and is extremely toxic. So much so that contact with this rain would cause seizures and death in a matter of seconds. Even the forgotten would be leary of this rain, but more resistant to it. (think: unprotected soldier = 100% chance of dying, no visceroid. Flesh is absorbed into the ground and fed to plants/wildlife. and think: mutant = 30-70% chance depending on mutation type) Rare red tiberium crystals would form in this setting, as well as blue/green moss, and blue/green crystals.

In certain areas you would see the giant tiberium monoliths/glaciers crumbles, cracked, and chipping apart, forming a type of "dirt" that the moss grows on. Visceroids would remain primarily in yellow/red zones, acting as defensive mechanisms for this new "habitat". Tiberian fiends/floaters would occupy red/black zones. New species would be found only in black zones, only able to survive in the tiberium atmosphere (think: our poison is their oxygen.)

The "rooted" tiberium would grow around the bases of some tree types acting as a sort of "nutrient feeder", allowing the tree to grow. Rooted Tiberium = grows plants, Glacier tiberium = dirt/moss. The tree on the right should have more of a crystal canopy (like regular trees have leaves) to absorb sunlight & the energy from ion strikes

Additionally, we have a model for the Juggernaut/Behemoth (See below). 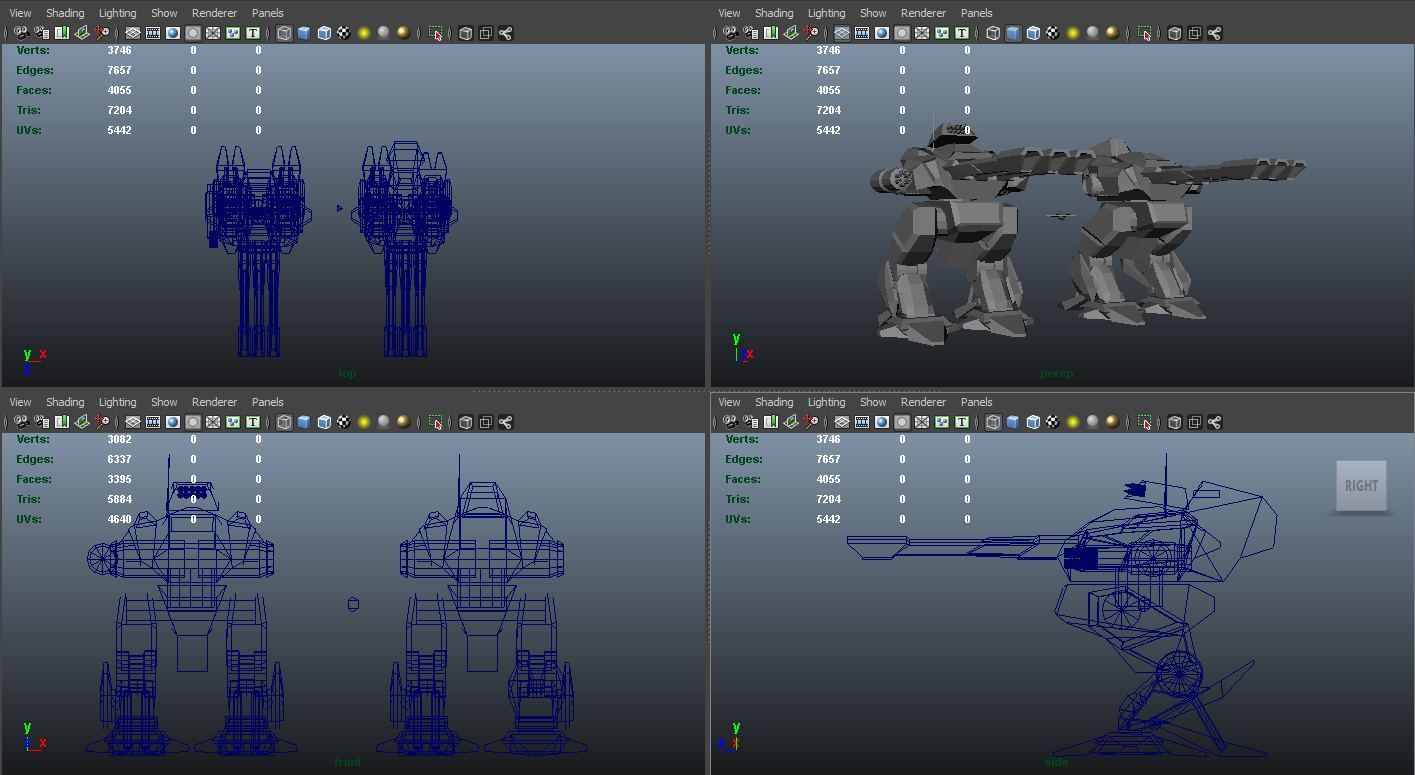 Concepted in the Juggernaut is the potential for upgrades including laser sight (increased accuracy), emp shells (for long range disable, set on CD), chaingun, rocket launcher, and bunker (behemoth). The upgrades are still under discussion but we would love to hear your thoughts on what the juggernaut should have and your opinions on the model! -Jay

Stay tuned for the next episode of jackass, I mean, C&CIV, for exclusive in-game screens! -C7

I'm here with some mapping updates, we will have a new array of skirmish maps and (after the first release) mission maps but for now I'm going to show you a few pics from my newest skirmish map for Tiberian Eclipse, It is an unnamed 4 player blue zone map, with tiberium nodes, Defense cannons, and some recourse structures. But enough with the talking here are some pictures!

Baseball in the big city- 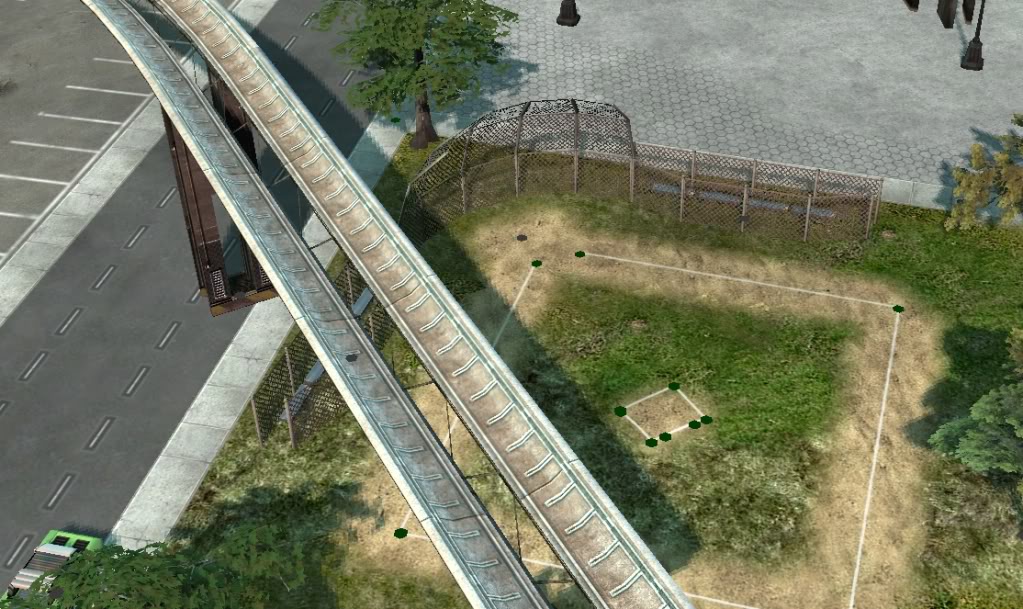 Thats all i have for you today!!

Very Nice! Thats Got to be One of the best Pictures of a HMRLS I've seen.
Again great Work The Juggernaut Although Should have a Bunker instead of One permanent Upgrade. Having a Already made bunker can give the Player Flexibility on a quick notice. Is the threat Armor Or infantry? Do I need to load Some grenadiers and Clear Buildings?

Loving the Black Zones and the ZOCOM Factory!
Keep the Great Work Comin!

Bunker version of the juggernaut (aka Behemoth) is on the right. Modular Juggernaut is on the left (concept options: chaingun, rocket launcher, emp shells, laser sight (accuracy)).

Awesomeness blackzones should be incredibly hostile.

But their should be a Nod Faction that is able to use them to their advantage *Due to nod utilizing tiberian infusion maybe a scientific group that is strong in blackzones? maybe has powers etc. based on tiberian manipulation and some such?*

GDI and Nod will be about on par in black zones. The only faction to show a true advantage in black zones would be The Forgotten (to be added in a expansion) and of course, the natural elements of Tiberium (Visceroids, floaters, fiends, etc)

Love the black zone concept. I can only imagine the creatures there.

Actually, I had an idea of what one COULD be (if you accept suggestions/ideas).

Absolutely! We could use more concept art for black zone creatures.

Like the name says, it bears a freakish resemblance to a bloated, flying, tiberium mutated human lung. It posesses a single eye on the bottom of its body and a long, trailing tentacle. It floats at a low height (probably a little lower than a Drone Platform). Due to its extremely sensitive eye (adapted to see well in the gloomy black zone areas), it is easily spooked by bright flashes (like lasers and railguns) and will flee if spooked.

They are also vampiric, however, and will attack infantry with the mouth at the end of its tentacle after spitting out an immobilizing, tiberium based, net-like substance. In the presence of vehicles, they will attack them exclusively, though their attacks are inneffective against armored units. They heal at an almost visceroid-like rate in ion storms and tiberium rain.

That's what I got. :) Feel free to modify it however you need to for it to work if you want to use it.

Meh. I hoping to see scrin cocoons in the black zones (look up some of the tiberium concept art.)

Are there going to be defensive barriers/walls to build as well?

Yes. Assault and Defense will get certain types of walls (subject to change to defense only).

Booyah on the Juggernauts, EA broke it really really hard and I'm glad you all fixed their failures. Good job! *thumbs up*

You're welcome, comrade. All in a day to salute you!

Seems my photobucket account is crapping out, but I've uploaded the pics to my moddb account as well: Moddb.com

Or better yet, imgur.com

for the juggernaut i suggest a individual upgrade style like the Chinese overlord from CNC generals which could include all of your ideas and a garrison pod, or you could do a permanent garrison station like the Kanes Wrath epic units that would put out more firepower than a simple garrison, maybe a permanent garrison of snipers would give it the laser sight, and goober you use behemoth to clear garrisoned forces? it is a lot easier and cheaper to do it with an APC or hammerhead.

The permanent upgrades like KW aren't possible with the C&C3 SDK. However, the plan was a Chinese Overlord upgradability. And BTW, Juggernauts clear garrisoned buildings via long range. Why would anyone put grenadiers in it?

they can? i never noticed.

in non-modded C&C3, juggernauts do not clear buildings...

My bad. Did I say cleared buildings? I meant demolished buildings and annihilated any infantry residing inside.

they can? i never noticed. then again I've always been the one to crush my enemy under the treads of a pack of mammoth tanks :)
by the way i also have an idea for the garrison pod, i suggest that it be made electable, upon death the pod will eject and the infantry inside will be saved, upon capture of the husk the behemoth will devoid of its normal garrison pod giving it all the functionality of a juggernaut a player will be especially grateful for this as when his enemy take the husk it will be devoid of that extra level of protection, allowing easy disposal

what about the eject-able garrison pod what do you think about it?