Czech Republic border near the town of Ostrava 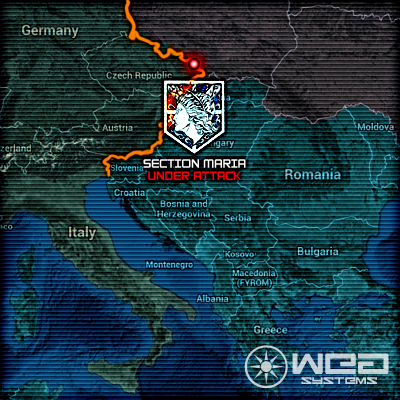 Captain Jaeger and his lieutenant are overseeing the refitting of Section Maria, part of the great WEA Wall, an absolute defense line along the Czech, Austria and Italy borders. "Sir, our long range sensors show a massive concentration of enemy forces.", reported the lieutenant, "Recon teams report that the ADF plans to strike this location with extreme force." "How far are we from finishing the deployment of our new defense line Lieutenant?" asked the captain. "We have mobilized all our worker drones and we are even supplementing them with our soldiers, but at the current speed, it will take about 2 more days. Our forces have been mobilized and are deploying mines and other traps around the area, with some luck that will buy us the required time." replied the lieutenant. "Do we have any news from High Command, any chance for air support or some reinforcements?" asked the Captain. "High Command says our troops are already spread too thin. The ADF attacked our German borders as well, and we just received word that our outpost in the North of Greece is also under siege." replied the lieutenant. "Then I guess we will have to hold for 2 more days" said the captain while looking out of a window in the command center.

The outside looked like a bee hive. Dozens of worker drones and soldiers were working on large metallic structures within a large wall. Tanks and other combat vehicles were being deployed in key locations outside the wall. Soldiers dug trenches and minelayers deployed several lines of explosive traps. Every minute they could delay the enemy troops was a huge win.

"Captain, ADF forces have reached our mine fields. We have reports that they suffered multiple casualties, stopped their advance and are now trying to disable our mine fields." "Deploy all Spartans on the high ground. Mobilize all anti-armor troops and sniper teams on the walls and within the trenches. What is the situation with the wall?" "Cerberus Turrets are almost complete. They are doing in their final safety checks and should be operational within a couple of hours. The Forts, however, will require more time." Suddenly, the sound of railgun fire was heard followed by the sound of an ADF light vehicle exploding. "Captain our forward base is being overrun!" The captain activates his comm link, "All units we are abandoning the base, everyone retreat to the wall."

As the captain and his forces makes their way towards the wall they are receive a message from the engineering team, "Captain, the Cerberus Defenses are operatio-", before the message could finish large orange projectiles heated the air and vaporized dozens of enemy units. "This is Captain Jaeger, all available infantry retreat inside the Cerberus' Bunkers, I repeat, retreat inside the Cerberus Bunkers. All artillery, concentrate fire on enemy forces attacking our infantry, all worker drones, focus on Fort A, then move on to Fort B once your done."

"Captain, we've lost most of our Spartan emplacements... and enemy forces keep coming... dear God... they brought Titans! Even our Cerberus Turrets are no match for those. Captain what do we d-", a call interrupted them, "This is worker team alpha, Fort A is complete and operational." "Thank God..." said the Captain. The sound of the large rotating turrets on top of the fort echoed around the wall offering the WEA defense forces a feeling of victory. "This is Captain Jaeger, all remaining infantry forces move inside the Fort. All remaining combat vehicles concentrate around the second Fort. Protect it at all cost."

As the captain was sending his orders, the giant Photon Turrets on the Fort started to rain death on enemy troops. Even the mighty ADF Titans stood no chance. The Cerberus Turrets switched from projectiles to focused beams which were more suited for close range combat. Infantry forces inside the forts and the Cerberus bunkers took out wave after wave or enemy troops and vehicles, as artillery behind the large defensive walls rained death on the ADF's artillery.

"This is worker team alpha, the second Fort is operational." By this time, most of the ADF forces were destroyed. Within the next hour all ADF forces were either destroyed or on the retreat. "All remaining air units, hunt down any enemy troops. If they want ruthless warfare, then we will show them ruthless warfare. Leave no survivors. This is an order." 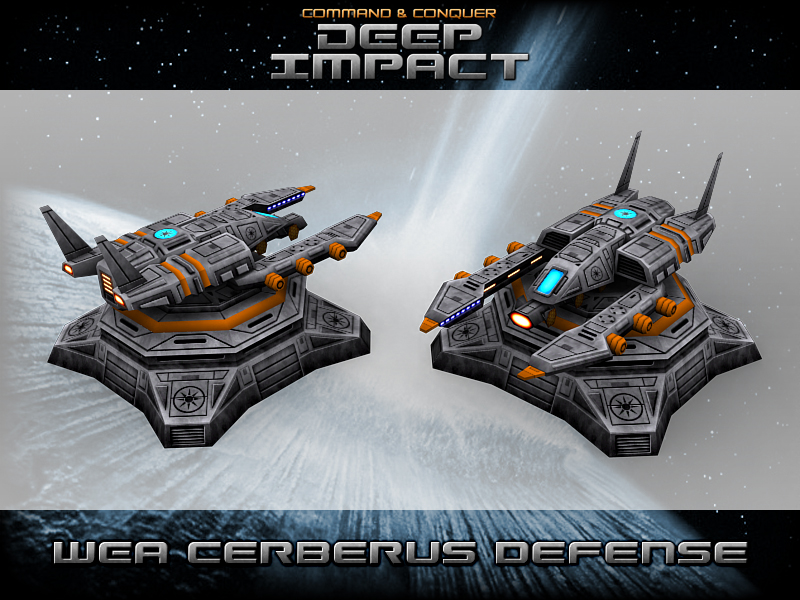 One of the strongest defense systems ever built, the Cerberus is the latest in WEA's Photon Pulse technology, a product of highly advanced electromagnetic technology and secret nano entagled plasma research, Cerberus turrets can fire either highly concentrated bursts at very long ranges, or can switch to a continuous beam of energy for less sustained damage. To make it even more deadly WEA high command, mounted this monster defense systems on top of heavily fortified bunkers.

The Cerberus Defense is available only for the Continental Defense subdivision. 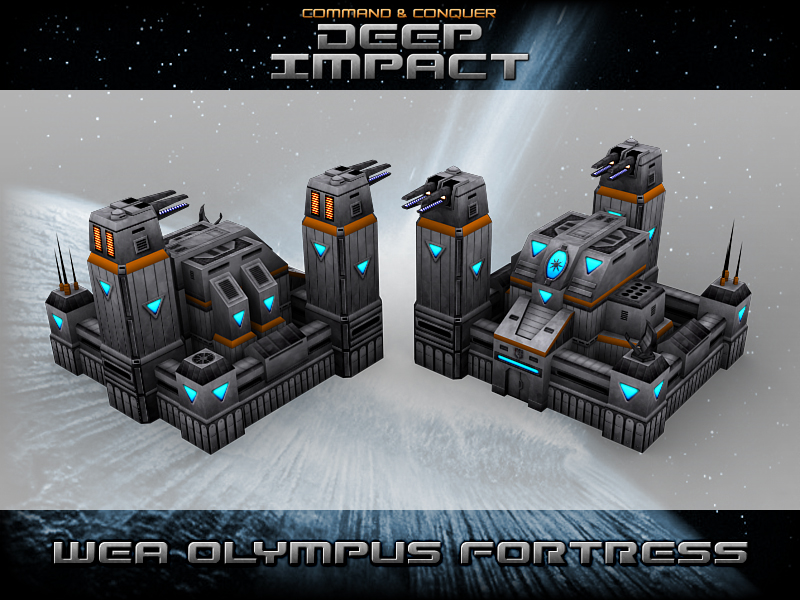 When WEA decided to create the great defense walls around its borders, they needed to create large defense emplacement that could also act as resupply and resting facilities. Under the close guidance of Swiss Army contractors, development of a new heavy defense facility was started. Dubbed Olympus, after the famous mountain of the Greek Gods, it stands as a giant among other defensive emplacements, and can also unleash the wrath of the Olympians. Armed with 2 large Photon Cannons and a large infantry garrison, as well as heavy armor, such forts can hold entire enemy columns on their own. Their downside is the lack of anti-air weaponry and the huge costs of production.

The Olympus Fort is available only for the Continental Defense subdivision.

You want more? You got it!

Superweapon General's defences have nothing on this. Though I somehow feel like she'd be something of a hard counter to the Continental Defence Subdivision, thanks to the mass use of superweapons and powerful bombers.
Good thing this is a complete conversion. :P

Nice story i love the mod!

This isn't first game where I see borders between Czech and Slovakia, just because it looks nice on map. But the truth is, these two countries are pretty similar with politics. There is not place for borderline between us.

The USA starts WW3. I am Lost.. Or Hindi ko lang gets yung story.

kek, the article actually got reposted.