Learn what we have been working hard on for the last weeks!

For the past few weeks, we have been working on the next new puzzle element for Blue Portals. Well, it was not an easy job, as we had to make it so it wouldn't break the engine and would be easy to work with. So, whats this new puzzle element? Well, it is light. And it's going through Portals.

Around finishing 06, Colossal brought up an idea on portalling light, having it melt the ice cube, etc. It was an idea that we skipped over, but we kept coming back to it. Of course, the idea that if we could 'fake' the light effect going through a Portal, and have the player choose where he/she wanted it to shine was something that would make it more of a "Portal Puzzle".

From the start, we could not use real lights (light, light_spot, etc.) as they will make Vrad not compile the lights if we attached them to Portals. So we looked at fake stuff such as brush textures, point_spotlights and env_sprites as they have no relationship with Vrad. Brushes were tried first, but looked like garbage as it did not look like light. Then we tried point_spotlights.

Point_spotlights are usually used for spotlights, car lights in the Source engine, and other stuff so they had this annoying glow at the end, and its properties get a little messed up when attached to Portals. This was what we where gonna use until I made another room and it just... Broke. Why? I don't know to this very day, it was too unstable I guess.

Finally, I tried playing with sprites. Well, it was a fail at the start but I reduced the HDR scale and made them each a certain distance a part. Looked great. However one small issue: the light blended in into Blue Portal's warm testing environment. So, as a last touch, the light effect was switched to the cold target color blue. Two reasons; one, it was easy to notice, and two, we don't want people to now start thinking they can portal from any light source. (Note: We are still working on it, subject to change; not final.)

The hard work has been done, now all we need to do is make the chamber and learn how to use it more and more so it should be another Chamber complete. We apologize for the lack of updates, as we are looking at what Portal can do before its sequel that is due this fall. 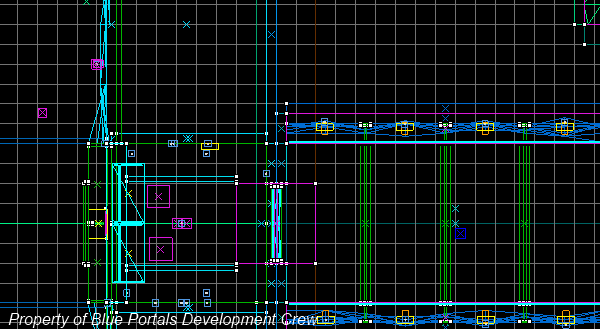 Woah. Woah. Could this be used as like a laser thing from that portal 2 fake as well?

Anyways, awesome job. Bet valve is drooling over this mod once again.

Portal 2: The Fake Community-Made had nothing to do with these laser things. :O

Wouldn't a projected texture work, or do they not cast through portals?

(given how temperamental they are, I wouldn't be surprised)

Textures and brushes looked like garbage. I think we did the best we could. :)

Wonderful. I love the way BP is using Source in ways not even dreamed of by others.

I 100% know what you mean there X3
and you guys are really smashing through limits. hell, the way you did that sprite thing could just be how P2 uses the forcefield thing :D

That is a really cool puzzle idea

I think you should make the light yellow :l

Then it would blend into the environment. We tried. Easier to identify if blue.

If it would only happen if the light hit a specific area of a surface (the mirror), it could work just like one of the light-receptacle buttons, except instead of making something happen, it's output would be more light-sprites off in whatever direction the light would reflect, were it real.

At least, I think.

Anywho, it all looks pretty epical.

Man, you guys always think outside the box. All you move around in Portal is yourself, some boxes, and energy balls, but in BP you move light, water... what's next, wind? Heat? Maybe moving portals through portals?

This is shaping up very nicely. Like the clean look of it.

i didnt know light didnt go through portals until i tried to light o non-lit room with one, while i was in the middle of making it
cool that you got it to work :)
get some screenshots and/or videos of it in action!

I would love to see a video showing off the light mechanic.