After a long break, Rocket Launchers are back in their full accurate, damaging, and Rocket Jumping glory!

Oh the Rocket Launcher, long a staple of the first person shooter. Sadly throughout its years of use however, it has been downgraded from an elegant weapon excelling in both damage and maneuverability to a laughing stock, barely able to get the player anywhere, except the respawn screen. In Bloodcrusher II, we have worked tirelessly to bring the Rocket Launcher back to its former glory, and I have to say, we're pretty happy with the results.

Rocket Launchers are part of the explosive (or red) category of weapons. Their high damage output makes them ideal for taking down heavier enemies, and crafty players can utilize their rockets to perform the fabled Explosive, or in this case, Rocket Jump for enhanced mobility. While explosive jumping can be accomplished with any red category weapon (and even some grenades), all jumps pale in comparison to those used with a rocket launcher. They are quicker, capable of exploding on contact with a surface rather than the limited survivability of Grenades and Grenade Launchers. They are stronger, providing more power for the player to surf off of. For all of their strengths however, they also generally cause more damage to the player than other explosives for jumping, making an ill-timed jump a one way ticket to game over.

Like every weapon in Bloodcrusher II, rocket launchers are divided into different parts. To visualize this more effectively, let's dissect a basic rocket launcher. 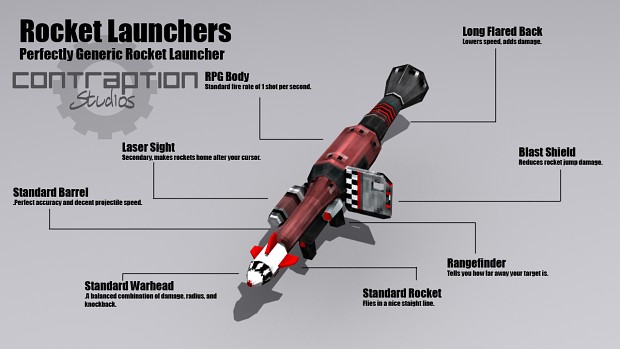 To start, this Rocket Launcher is rocking an RPG body, the standard rocket launcher body. Bodies determine how your rocket launcher behaves and the damage output. The barrel is also standard, providing perfect accuracy. The back is the long flared variant, which increases damage at the cost of some projectile speed. The actual rocket projectiles are formed from two parts, the rocket and warhead. While the rocket determines how the projectile travels, the warhead is what gives it strange properties. While this Standard Warhead is the simple, jack of all trades variant, it gets crazy really fast, and we'll get into that later.

Like every weapon class in Bloodcrusher II, weapons have numerous possible secondary abilities and attachments. This rocket launcher features the laser sight ability, which allows you to guide your rockets to their soon to be gibbed targets. This Rocket Launcher also features the Rangefinder and Blast Shield attachments. While the rangefinder gives you a constant stream of data under your crosshair regarding the distance an object is away from you, the Blast Shield has a much more practical purpose, reducing the damage you take while pulling off some sweet jumps.

Now that we've seen a basic rocket launcher, let's get into something more awesome. 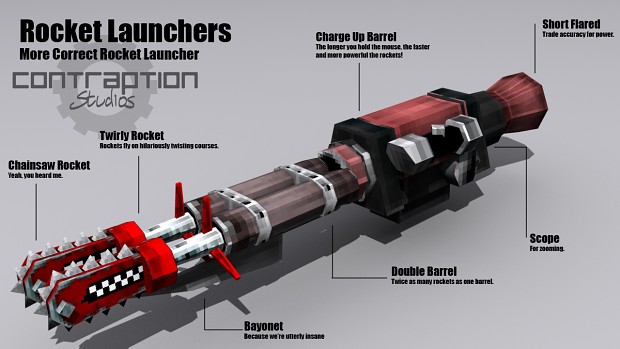 Yeah, it's that awesome. Do I even need to explain any of this? I mean seriously, this thing fires chainsaws. Two of them! That's more than twice as many chainsaws as one would expect from a rocket launcher.

With all these parts, you must be wondering how many Rocket Launchers we will have. Well, where x is the amount of launchers we have, x > 1.1 *10^10, give or take a couple million. Basic Rocket Launchers are what you will immediately find in a game of Bloodcrusher II. As time goes on, more and more rocket launchers will become available; we will work tirelessly to bring you only the highest quality arms and munitions to explode all the things.

that will be nasty as heck :D

We would need a huge *** RPG that shoots nuclear warheads and one that shoots gigantic lazor.

I can confirm that nuclear is one of the warhead.

Super badassery! Attachments on super gibbing-weapons, this game gets better and better.

Like I said on that demopic regarding chainsaw rockets,

time to make a super gory chunky mess...from a distance!

Bloodcrusher II is still in development, we will give an Alpha release date when we feel comfortable.

This is the best thing ever.

I've done the math, are you seriously gonna put in millions of rocket launchers in the game?
If so, I can die happily.