So, last week One_Winged_Angel showed you guys this image of a Rhino Tank rumbling through the map, South Pacific. If you look closely at the tree on the left side of the screen, you'll see something sticking out from behind it. 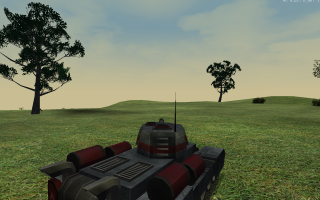 That "thing" is a Terror Drone!

That's right, ChAoS has animated and rigged up the Terror Drone for use ingame, with dtrngd setting the physics values. The animations are working really well at the moment. It looks as if the final terror drone will be rigged up as a "wheeled vehicle". I've tested this out, and it works pretty well.

There's not much else to say until we get the attack mechanism setup properly really other than the fact that Allies need to keep their Repair IFVs close.

danpaul88 has made two videos of the minor weakpoint and repair nodes in action. This is all done using custom scripting which enables the disabling of structures and more areas to get a repair bonus, respectively.

Destroying the fusebox will prevent the Allies from purchasing advanced infantry classes until it has been repaired.
This updated demonstration includes the new destroyed state for the fuse box and Lt. Eva's notifications when the building goes offline due to the minor weakpoint being destroyed.

Here's demonstration of the repair nodes in the Allied Barracks.
Notice how much faster it is to repair a building using these special nodes rather than simply repairing the walls.
The repair speeds shown are somewhat exaggerated to make it easier to see the difference.

danpaul88 is working on the scripts for each faction's Miner at the moment. Both function as they should do, so now we have the mining game mechanic sorted for the AI!

The Chrono Miner no longer needs to be spoon fed the IDs of waypaths it should use for each step of it's journey, making it much more flexible and allowing more scope for using multiple chronoshift zones (ie: this one is busy, lets try the next one) in future.<!--QuoteEnd-->

Apocalypse Rising features two distinctively different Mining units for each faction, each with their pro's and cons.

Just like in previous years, Bluehell Productions would like to ask for your help at the 2009 MOTY at ModDb. As drunkill explained in his news post on the issue, nominations are now open for mod and indie-game candidates. Until January 7th, you can nominate as many projects as you'd like. Then, nomations will close and the Top 100 Mods and Top 100 Indie Games will be presented for the MOTY voting phase.

We would also like to suggest nominating other strong C&C related projects, to let the world know we're still alive and kicking. C&C projects have always had a strong showing in this. My pick of the rest would have to be Renegade X, just for the sheer amount of work they've put in to recreate Renegade on the Unreal Engine. The feeling of nostalgia is something incredible and Fobby & crew are a good bunch of guys. So if you stop by their moddb page, you may as well give them a vote.

Please note again that the mods and indie games are handled in their own categories, so there are no reasons to hold back voting for other C&C mods just because you want to have a strong vote for APB and AR.

Check out the main blog here.

P.S.: I think that a War Miner beat that Allied tank on RA2.

Indeed it did, but we can't balance things exactly as they were in RA2 because an FPS game has equal players on each side so it's not possible for the Allies to simply outnumber the Soviets all the time to balance the firepower each side has.

That being said we will be sticking as close to RA2 as possible without making it unfairly balanced against either team and it's a good bet the War Miner will be a lot tougher in the future.