It's finally here, guys! After 8 months' development, 3 Alphas, 1 Private Beta, and loads of time, effort, work, blood, sweat, and tears, from both myself and the community, the On a Rail Uncut Beta for Black Mesa is finally ready to go public! My little mod expands On a Rail in Black Mesa by 4 maps, more than doubling its length from Black Mesa's default offering. I've aimed to substantially improve on the maps from their HL1 offerings, and make OaR into Black Mesa's most exciting chapter!

Guys, I've finally finished it! It's been a very, very long road both personally and development wise to get this mod to where it is today, but I'm finally ready to release On a Rail Uncut to the general public. Having been in development for over 8 months, with 3 private Alphas and a private Beta, and with loads of feedback from the community here at ModDB, on YouTube, and over 2,100 posts on the Black Mesa forums, the mod is finally ready for public consumption!

This introduction is for those of you who are unfamiliar with the project and its goals. If you're already familiar with this work, please, skip ahead to the next section.

On a Rail Uncut was my little project designed to add back some of the missing content to Black Mesa's heavily cut On a Rail chapter, which was 10 maps in HL1 but only 3 in Black Mesa. It is an expansion project for Black Mesa. Like with this project's sister mod, Surface Tension Uncut, when you install this mod to your Black Mesa folder, it integrates the new maps seamlessly within the game's already existing campaign. If it all goes well, you shouldn't even know you were playing an addon at all. Enjoy the 1 - 2 hours or so extra content, at no cost! If you install OaRU and Surface Tension Uncut, then you can enjoy Half-Life 1 remade with next to no missing content; I've filled in all the gaps that the BM Dev Team left out of their first version. I will leave Xen in their ever talented hands; exciting stuff.

"But wait a minute," you might ask. "Why would anyone want to bring back those maps from On a Rail? That chapter sucked in Half-Life 1!" This has been said many times, far too many for my liking. 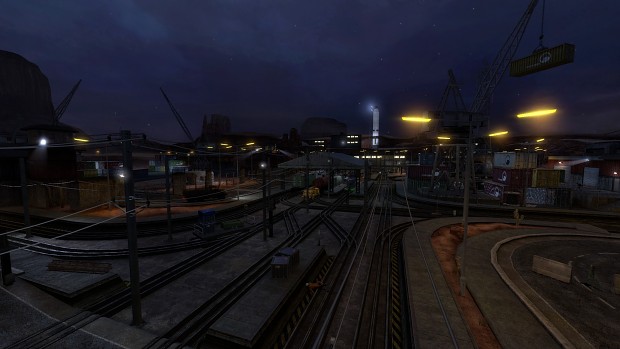 I too believe that On a Rail was somewhat bad in Half-Life 1, though I certainly never hated it. For all its mediocrity, which it had in spades, it had lots of memorable moments, and the sense of long journey and progression present throughout the chapter whilst traveling to the rocket was excellent and added a lot to the overall feeling of the game. It was long, yes, and boring in many places, yes. But - it wasn't boring because it was long; a common conflation amongst fans. It was boring because of the long stretches of blank, samey tunnels, and the very confusing designs of some of the loops, particularly the very first map, the unimaginative and underdeveloped ideas, and the lack of any form of easily identifiable thematic and story progression throughout the chapter.

My mod is not a 1:1 remake of HL1's OaR, very far from it. The missing maps have been very dramatically redesigned and expanded where necessary, to try and bring back all the good elements of those maps without any of the weaknesses. What all this means is that, even if you hated On a Rail in Half-Life 1, and really liked Black Mesa's version, you should still definitely check out this mod. I've "Black Mesa-ified" the missing maps, aesthetically, design wise, and gameplay wise, so if you liked Black Mesa's treatment of the maps which did make the cut, you should also like these ones! The maps have seen tonnes of refinement over time thanks to the copious amounts of feedback from the ever fantastic Half-Life community. While I may have done all the mapping and technical stuff, this is still very much a community effort, to build a better version of On a Rail! 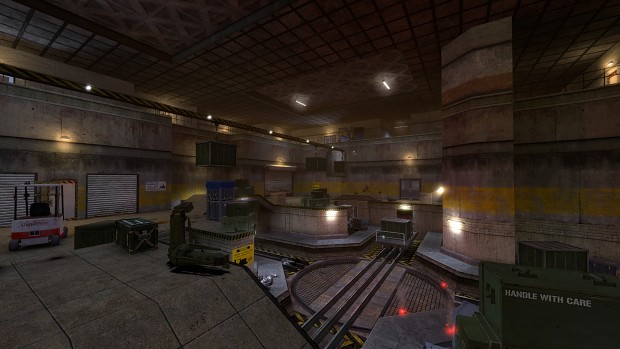 As per usual with every new post so far, I'll just reiterate for those of you who don't know, PRECISELY what my mod adds to Black Mesa's On a Rail:

You may have noticed that OaRU has been in development for a lot longer than STU was. This is because I've worked really hard to design out all the flaws from HL1's chapter, and have had a detailed and long interface with the community about how best to go about doing all of this. Here are some of the ways in which I've attempted to do that: 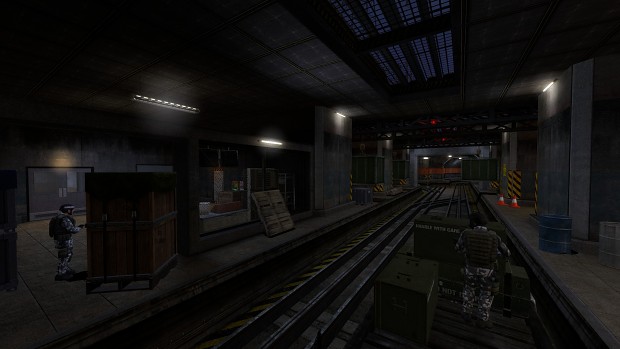 You can download the beta here on this ModDB page. Simply extract it to your BMS folder, and you're good to go! Start a new game from On a Rail, and check out all the changes for yourself! Make sure you look over the readme first for important information, and be sure to back up all your files first!

The Beta is substantially different from the Alpha version. I've made absolutely tonnes of gameplay and aesthetic improvements, there really is no comparison between the two. Lots of the maps have been expanded even further, and nearly everything has been tweaked, changed, and improved. The Beta is how I'd envisioned OaRU when I set out to work on it. It's fairly representative of how the finished product (which should be reaching you within 1 - 2 weeks or so) will look, but with a few bugs and optimization problems, which will be fixed for future versions. I'm really happy with how the Beta has turned out, I really am, and I hope you guys enjoy it too!

I look forward to hearing all the feedback from the community on my little mod, and I hope you have fun playing it. Just try not to be too mean; I've poured my heart and soul into this work, even treating it as a full time job for the past month or two. Please, try and refrain from going into it with too much of a predisposed prejudice, based on your dislike of HL1's version. I promise that mine is very different, just like how Black Mesa is very different to Half-Life 1 anyway. Though I am expecting lots of trolling 1 ratings from people who didn't like HL1's On a Rail, and thus simply immediately discount my work, I'd really love to keep that to a minimum! The best thing I can say here, is that if you're sure that you're going to hate it, don't install it! That's one of the great things about this being an optional expansion - if you can't stand On a Rail being long, then Black Mesa's default offering is perfect! 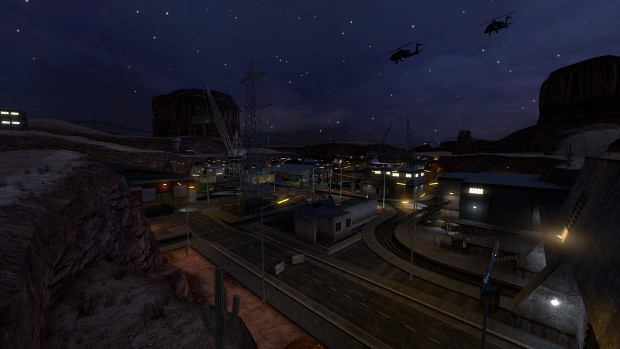 Well, this is what I've been waiting for to play the whole Black Mesa package.
Thanks a lot man ;)

You deserve the respect of every Half-life fan by making Black Mesa even more complete. Just as much as the BM devs deserve it.

I guess now we'll just have to wait for the BM devs to release Xen :D

Did you do the awesome "Surface Tensions Uncut" as well? If so, then this is going to be badass. Just from the video alone, it looks simply amazing. I love BMS. I'm in the Lambda Complex again right now. Just uploaded a ton of great wallpaper and 3D imagery to my photo gallery, for those interested. As for the mod, I really want to play it, but I'll wait until you get it fully complete and kill any reported bugs.

On a Rail uncut is great! Level design and gameplay looks amazing! Though there are one major problem: after each level finishes loading it always crashes to the desktop with error message : Can't load lump : 53 of 17113909 bytes failed!!! I hope you fix this issue in the final release. Good luck!

It appears that the transition from BM_A2 to BM_B map, the tram seems to disappear and Freeman has to run on foot. Could you fix this.
Thnx

will be ready when the final version?

As I said on the mod's main page:

I'm sorry to say that there will be no final version. I'm no longer working on On a Rail Uncut, on account of having joined the Black Mesa Dev Team. You can find my announcement here:

I may return to this little mod some day, when my commitments to BMS are a bit more relaxed. We'll see. Most likely not, but that option is open.

Regardless, when I released it, the Beta for OaRU was the finest piece of work I've ever created. I'm very proud of it, for all its problems. I hope the community liked it too, even in its beta state.

hey man can you tell me how can i install these maps?I dont have maps folder in my bms folder,nor any models,materials etc..i think it has something to do with steampipe update,all files are compressed in vpk files

I am late I know but I just recently downloaded your on the rail uncut and you did a REALLY good job however I never got very far because before the rocket lunch the loading screen freezes and none of the autosave work either they all freeze. I do not know what to do or how to fix this. I s there anything I can do to convince you to help me please, it looks really really well done but it does not work properly

please help me sir, I really would like to discover more, you did a really good job

it is from C2A2A2 TO C2A2B the loading freezes I cannot get pass that not matter what I do, I have to enter the map name in the command prompt to skip the loading and thus the freeze but if I do that then I loose all my weapons and my suit as well (including my HUD and flashlight)