Got some beta testers, and they are beta testing away!

Thanks to everyone who volunteered to Beta Test. I got a handful of testers, and they are getting started.

I appreciate everyone who volunteered’s interest in Threat of the Trinity. I now know there is a base of at least 10 players out there! That’ll make all the effort worth it!

I got a couple of testers, though I could have used a couple of more perhaps. There were some good looking candidates on the Beta Testers Needed post, but many of them forgot to contact me through email! So, I couldn’t contact them.

Now, onto other topics. The original plan for Trinity was for it to have as little impact on the original game as possible. In previous posts I have pointed out why I have had to move away from that slightly, mainly because of the increasing size of the mod, and the need to integrate the old content with the new, naturally.

However, there are a few places where I have made some tweaks to the balance and gameplay of the game that drift from the original and do not involve integration of content. Mostly these are straight ‘improvements’ inspired from Ultima V. Diagonal attack, Directional search, Multiple Reagent mixing, Active player etc. Others are enhancements of existing gameplay, for example, Virtue based NPC reactions and personalites.

There are a couple, however, that are slightly controversial, that I shall go into here. First up is a small, recent tweak, that I feel improves combat. This tweaks prevents the player using any ranged weapons (except daggers of course) in close combat. 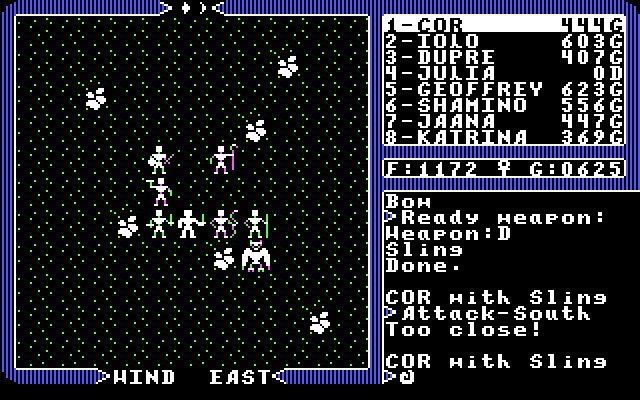 TOO CLOSE!? HE'S ONLY RIGHT IN MY FACE!

I feel this gives combat a slightly more realistic bent, and gives a reason for using/equiping alternative weapons during combat. It adds some strategy as well. I always thought it was a little cheap to be able to use bows even when the monsters had closed with you. Well, no more!

Next up is a little more controversial. Adjustments to earned XP! I needed to damp down the XP earned, or the speed at which it is earned, to spread out the players advancment within the game over the span of the new content. So I have tweaked XP. Currently it works more realistically, in that the XP you earn from any monster is never completely fixed, and lowers as you advance. So the first time you fight a daemon, at level 2 gets you a certain ammount of XP, and the 35th time you fight one, at level 8 gets you a much lower fraction of that XP. Which is pretty similar to how people learn. The learning value of an experience lowers over time for the most part. Additionally, not every monster is the same difficulty, and there is slight variation between individual monsters difficulty/earned XP. 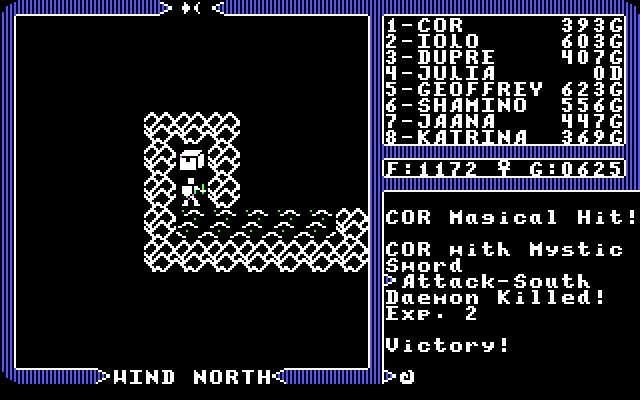 Last, and maybe the biggest change, is how all spawning is handled. The original was very simple, and had three steps, based off the number of moves the player had moved. ‘Mobs’ were also for the most part balanced to the party size.

That is all changed now, with spawning now being determined realistically by the type of terrain, proximity to dungeons, caves, crypts, or conversely, towns. There are further factors or throttles on the spawning, but sufficed to say, it is much MUCH more complex, and realistic.

The result is a MUCH harder start, with a slow reduction over time as the player moves past simple combat, and onto the more important tasks of becoming the Avatar, etc. Further, this also allows the land to have a dynamic change occur to it, as the wild early days slowly evolve into a realm of peace, thanks to the actions and examples of the Avatar.

Being able to ‘effect’ the land, and see the fruits of ones labor is fun. Also, the early game is where we can tolerate lots of battles. Later, at least in my play throughs, you reach a point where you don’t want to be attacked by little groups of two-bit orcs and rogues 6 times while travelling between every town. This new spawing system lets those types of attacks fade away, so the end game can be focused more on the final quest of the avatar. In fact, those mobs will learn to fear you, and may even flee rather than engage in combat with the reknowned Avatar.

I DARE YOU TO ATTACK ME, FOUL CREATURE!