Threat of the Trinity

This project aims to modify the original Dos Ultima IV to add additional content, via quests, locations and features. It will also avoiding altering the original quest content as much as possible, permitting the game to be completed in the original fashion, whilst still making the new content available. A few bug fixes of the original code will also be added.

Passage of the Moons-Trick fixed

More than one hundred new Characters

2nd levels for all Towns

Many, many more small additions

All credit goes to ergonomy-joe for making this possible, thanks to his u4-decompiled.

James Van Artsdalen for the conversion to C for Dos

George Stepan for the town and world editors

Lord British for the greatness that is Ultima IV

Thanks for voting and helping Threat of the Trinity on it's quest to become the 2021 Mod of the Year. You are now in with a chance to score some free games from our #modlove collection. Help this mod secure more votes by embedding the widget (or link) we have included below on your favorite sites.

I Wonder If I Can Make a Map?

Well, so far there are a decent number of people interested in feelies.

However, spending money on commissioning a map for the project might not be in the works. Map making can be a time consuming affair, and in the end could cost a goodly chunk of money. Considering the level of interest I have seen in the project thus far, commissioning a map would likely take up an overly large cut of the overall cost. Enough that it could impact production/expenditure on other important things, like the book or box.

So I am trying my hand at making the map myself. If I do it it will cost the project nothing, and allow me to push funds into other places. Perhaps I can’t make the map as well as the artist I have/had lined up, but I may be able to do it well enough to do the project justice. So that is where I am at right now. Here is a little photo gallery showing my work in progress. 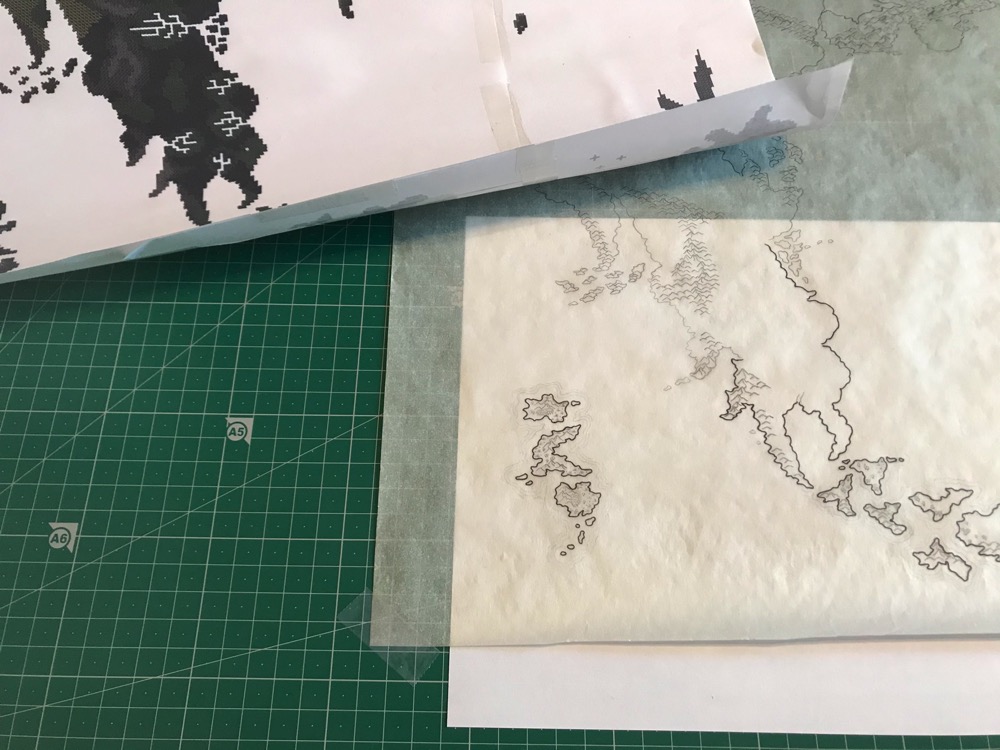 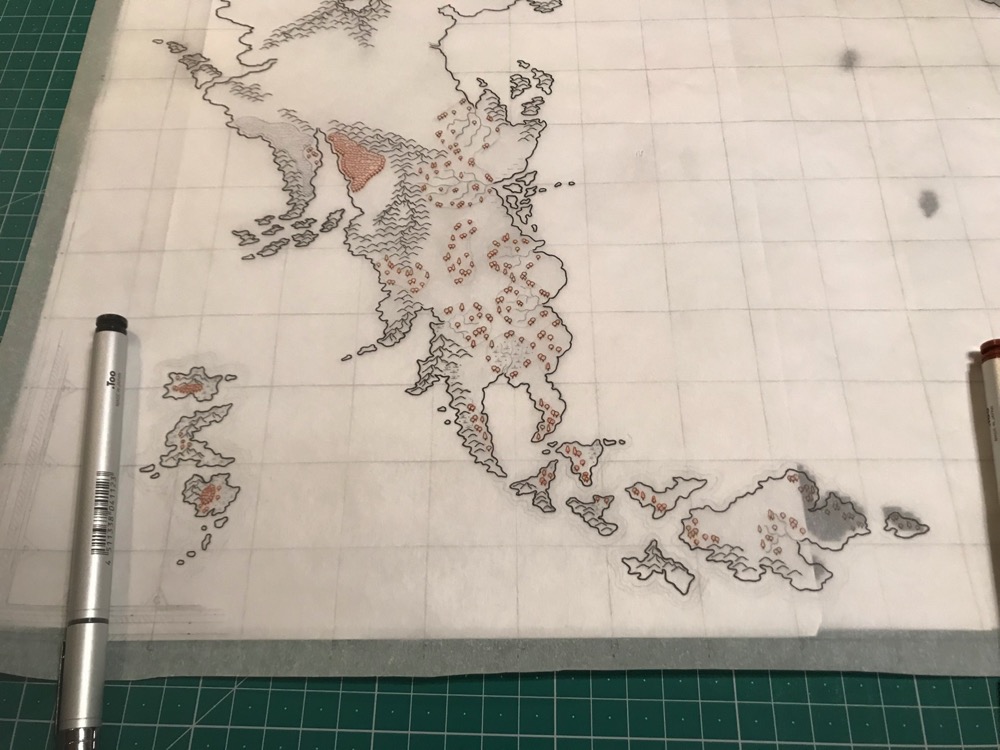 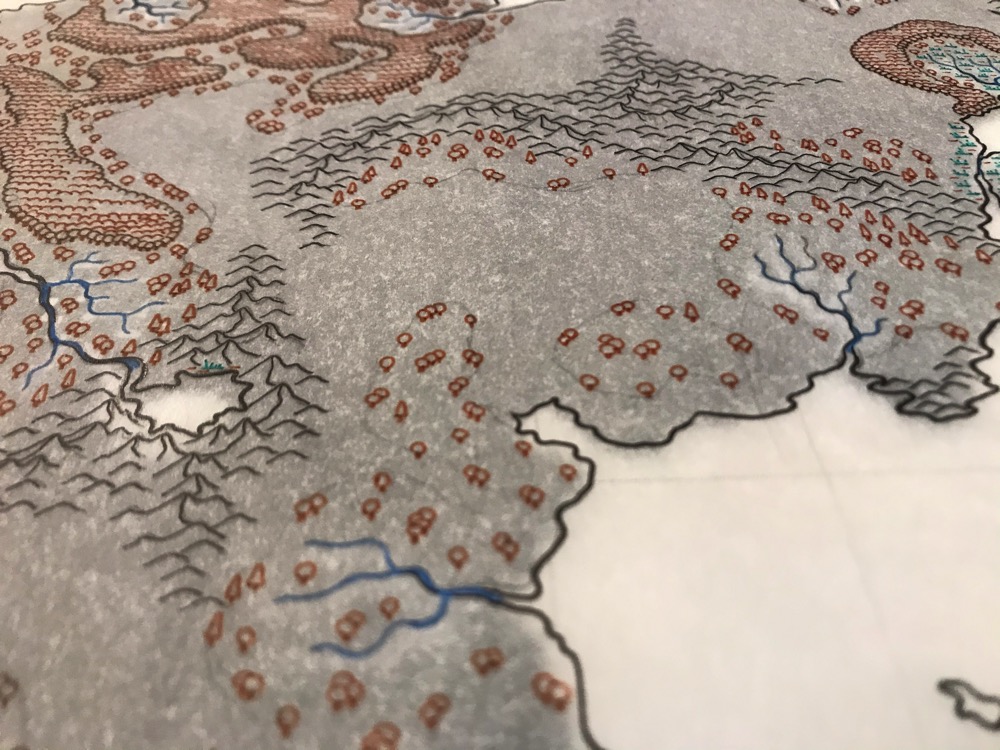 HERE IS A LITTLE CLOSEUP

While I carry on with this I have added a ‘Landing’ page for the website, which introduces the Feelies and let’s people sign up if they are interested. I am not really doing any promotion at all, so if you do know someone who might be into getting feelies, and the mod itself, send ‘em this way!

There is still some time before I commit to some kind of crowd-funding effort, but it is looking likely.

I have made considerable progress on producing the ‘digital’ resources for the feelies. I may have to make some kind of checklist and start marking them off as I complete them. Obviously the map is not done, but several other components are good to go, or very nearly.

How about Beta testing!? Well, the beta testers are going through their second play throughs. Limited bug fixing, as there are not too many left, but one combat bug has reared its head and taken up some of our focus/effort. Other than that it is mostly balancing stuff now.

A Box Full of Feelies

Anyone out there want feelies? Because I feel like making some.

So Close Yet So Far

Beta testers are going through their second playthrough, testing the updated content.

Beta testers have all completed full play-throughs of the game.

The Beta testing continues ahead full steam, and a new default bug has been encountered.

Glad to read the latest news. And those feelies looks great, I mean like.....damn good!!

C64 sid music for this game was the best!

Feelies are just a simulation, though digital versions of several are done and ready for production. Glad you like the look of them!

Music was always low on my priority, as I played without it. You can always fire the original music from any version you want up in youtube and play along. It can get pretty repetitive in some places, so blissful/meditative silence might be for the best.

This looks really interesting. I will be keeping my eye on this hoping to see it release. There have been a few really interesting looking Ultima series mods that have come and gone through the years, but most of them turn to vaporware. This looks like you've already spent quite a bit of time on it and actively have people testing it, so I'm cautiously optimistic that this won't be joining the fallen many.

It may join the fallen many, though that would likely be because I don't want to do a digital release. The actual game is releasable now, and is just going through extensive final polishing.

Is there a way you would allow us to download this to play? I was super excited to relive this game, with even more content, but Firefox, and internet explorer has a blank screen for the demo, and google chrome loads it diagonal.
Could there just be a file to download so we don't lose saved with updates? Perhaps then we would just port in our new saves our selves when you publish new updates.

But, either way, thank you, I look forward to spending hours on this game again. I still remember where a few of the runes are. I'm excited.

This is just a tech demo, so it contains no actual mod content. There would be nothing to play, as I am just looking for people to test the code for any big bugs. I don’t want to release a file that just confuses people, as it seem a good number have already thought this demo was a demo of the actual mod, which it is not. Just a slice of its new functions.

I suggest using the Brave browser to try the demo.

If you are not into testing, just hold tight for the actual game, which will be downloadedable eventually.

Is this a C64 port? If so, will it have the original sid music? Cause ultima 3 and 4 had the best sid scores!!!

It's a modification of the Dos port. So no music. However, there is another mod out there that adds music in for dos. So that could be added to this after. Though, it might be nice to include it in a final build.

I looked into it, and though it is possible, 60% of the add would have to be scraped to make way for the music. So, no chance.

Ultima IV: Quest of the Avatar

Single Player
Tags
Embed Buttons
Link to Threat of the Trinity by selecting a button and using the embed code provided more...