In my last update, I promised I would offer an example of the kind of reflections that could be prompted by clues and other narrative elements of the game. Exceptionally, She has allowed me to divulge a little more than usual, through the character of Glurg.

As promised, here is a new chapter in the "Behind the scenes" updates. But before getting to the heart of this matter, some good news! Don't Kill Her is the fortunate recipient of a production grant from Pro Helvetia, a Swiss public-law foundation. This grant will allow me to focus intently on developing the game. So keep an eye out for upcoming news from Her and I.

The script can be seen as a layer cake. The main plot, which comprises all major and mandatory events, is within everyone’s reach. Thus, even the less curious players will complete their adventure with a sense of achievement and satisfaction.

The second layer will reveal itself to the more curious players, who will have gone the extra mile to explore all the optional areas that hold some of the secrets that will shed more light on the In-Between and its characters.
For the more seasoned player, a third layer awaits. It requires much more interpretation and analysis from the player. Even the most insignificant elements of the game can hold a symbolical meaning, and help deliver the intimate and crucial message that She is trying to convey to the player. Obviously this level leaves the door wide open to individual interpretation. One of the aims here is to foster debates on the subject, allowing the community to enjoy itself while dissecting the game.

Don't Kill Her’s world hasn’t been waiting for you to get on with it’s life. This narrative choice implies that you can only begin to understand the origin and meaning of part of the events that you will experience through your endeavors by bringing the past to light.

It is this important feature that gives meaning to one of the mechanism of the game: T.H.I.S (This Huge In-Between System). A social network created by one of the characters that allows the inhabitants of In-Between to share their memories, a kind of Facebook. This network helps the player become aware of the characters’ pasts through their accounts. Moreover, you will be able to untangle and understand the relationships between the characters by reading their comments and publications. This system has already proven its worth in games such as A Normal Lost Phone. I’d rather not go into the details for now, as this is part of the surprises She has in store for you.

In my last update, I promised I would offer an example of the kind of reflections that could be prompted by clues and other narrative elements of the game. Exceptionally, She has allowed me to divulge a little more than usual, through the character of Glurg. 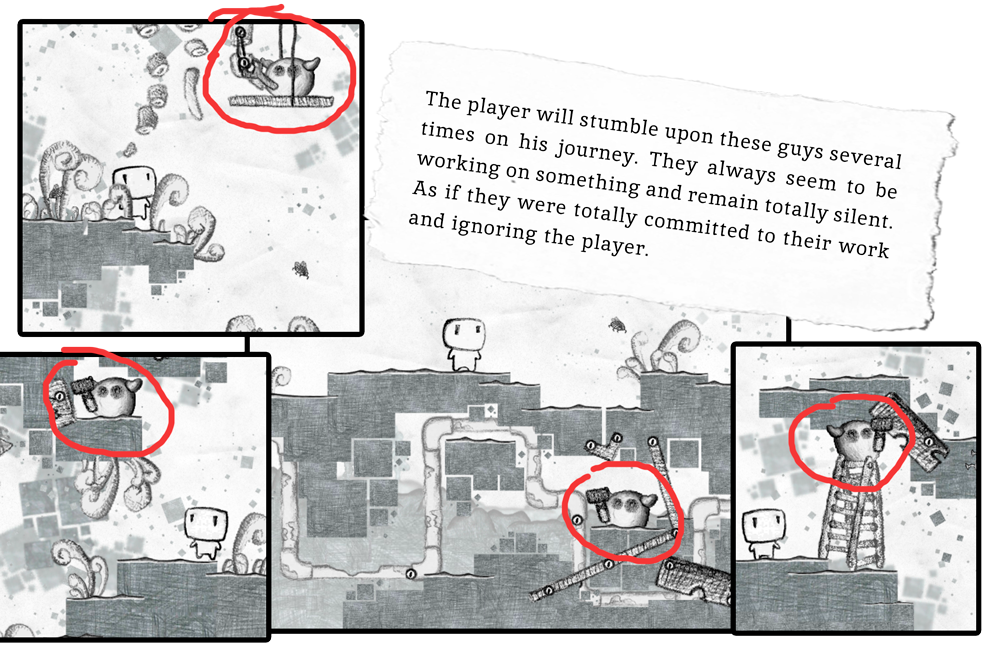 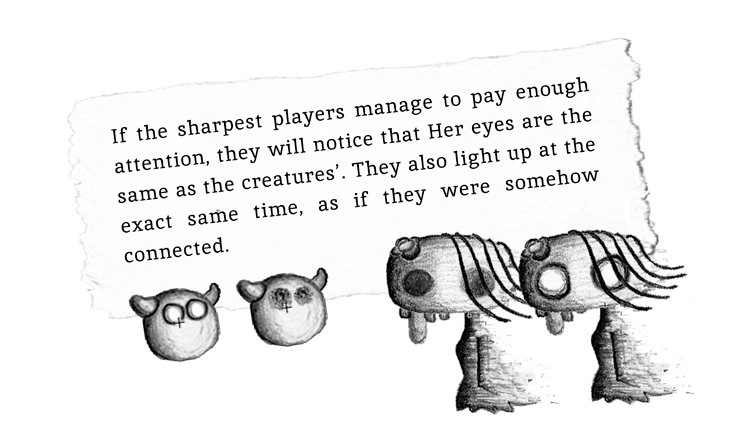 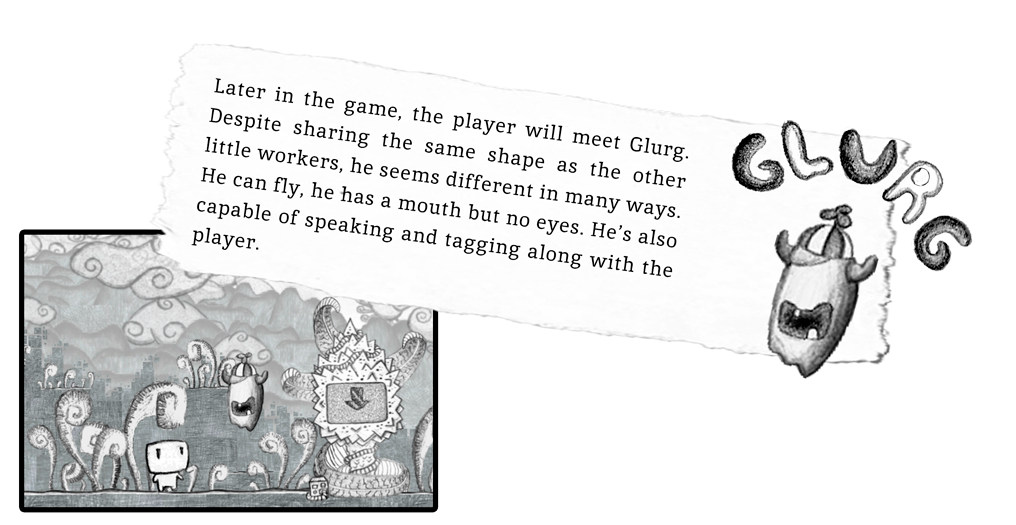 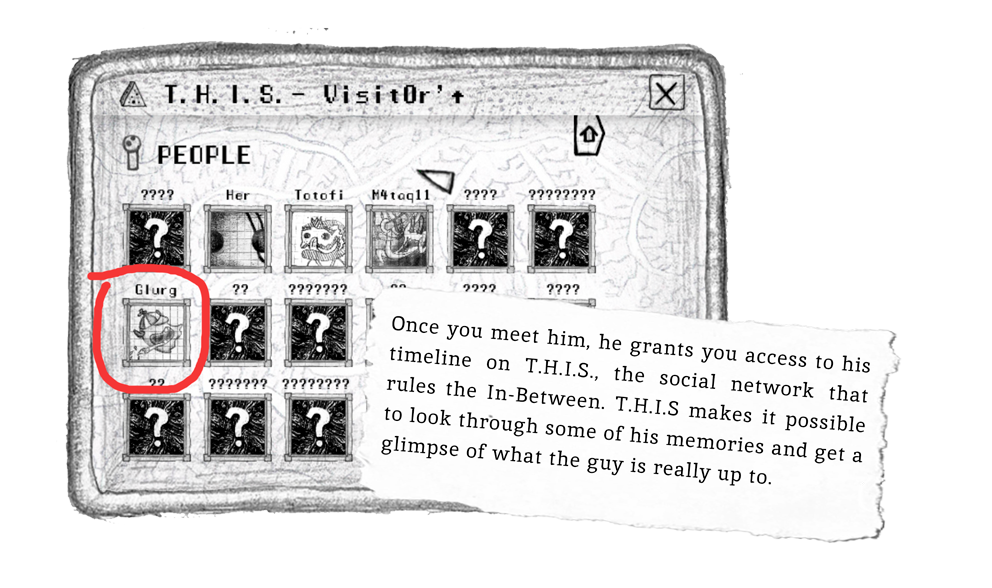 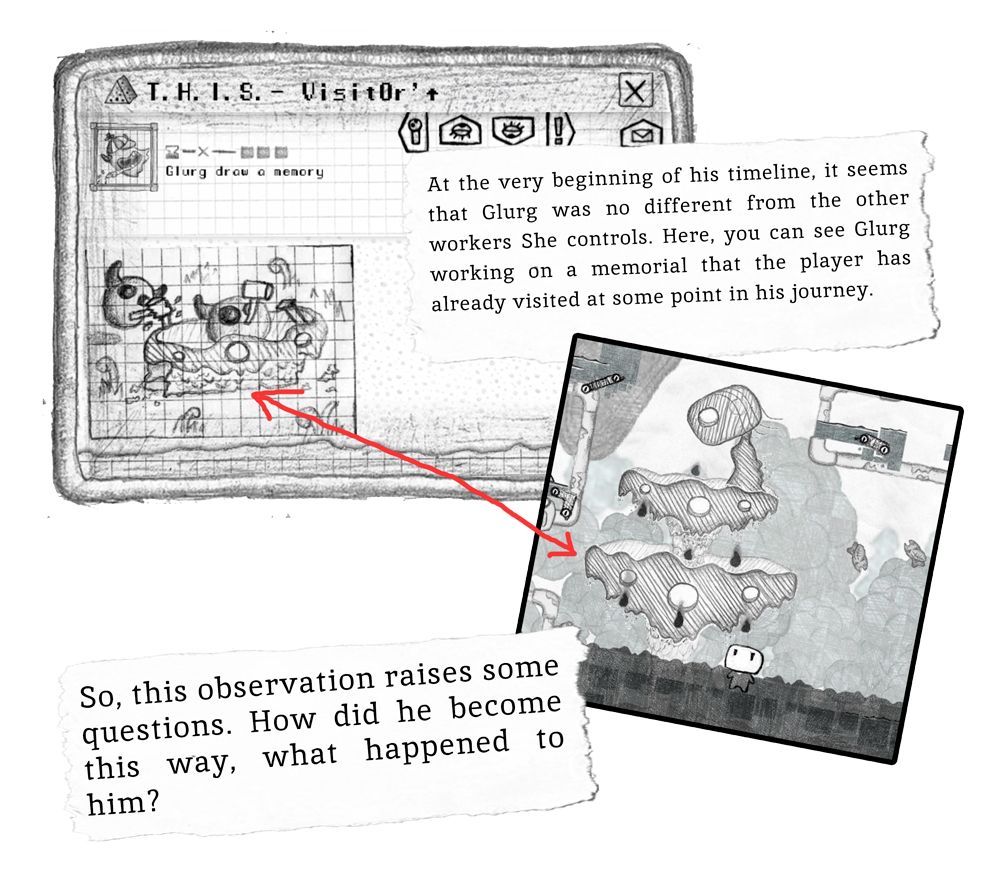 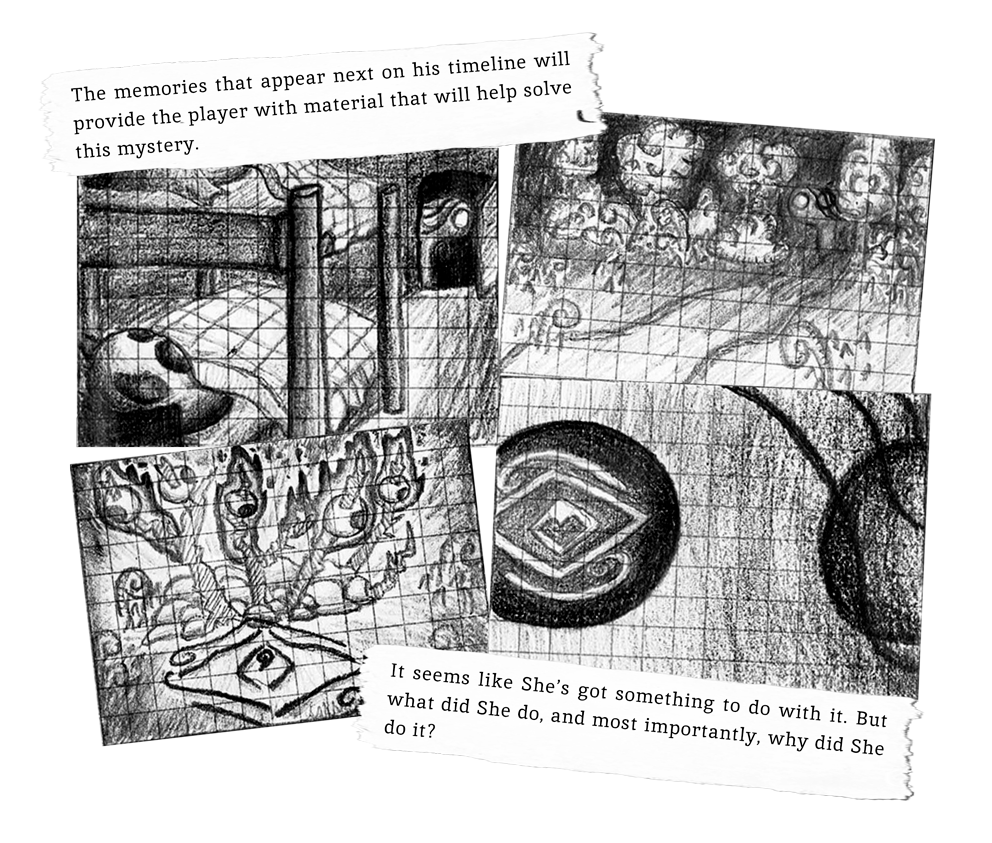 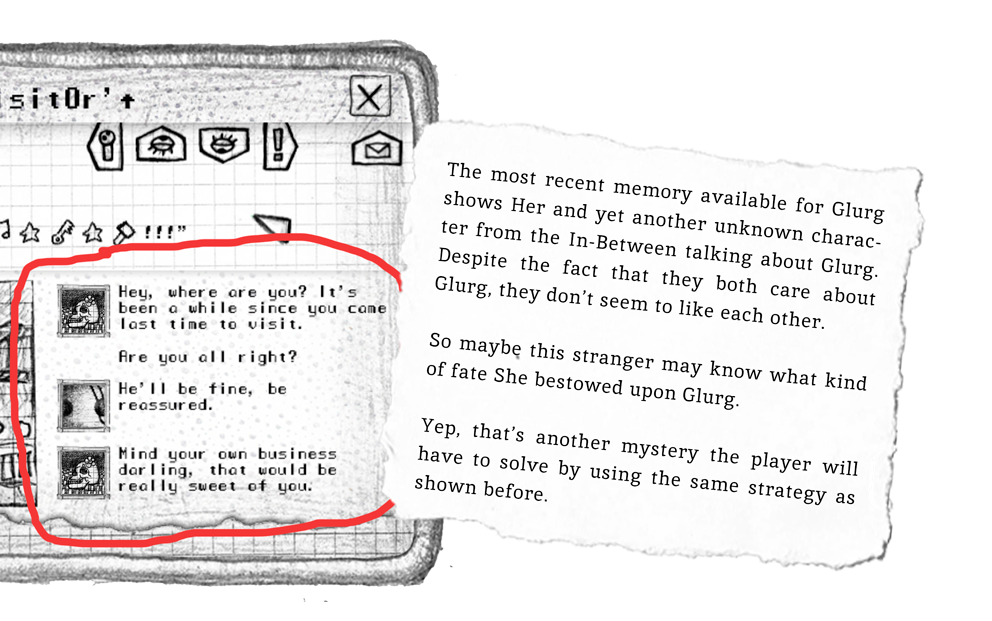 Here some clarification is required. First of all, the above example is in not to be considered as the solution to a puzzle that appears « in a playful way » in the In-Between. There are no questions, no tests and even less inherent rewards to merely resolving the game’s mysteries. Her will is certainly to encourage to do so, but She will never force you to do so. You should simply be aware, that as usual, with Her everything holds a significance.

Secondly, the aforementioned example refrains from unveiling what really happened between Her and Glurg. As you may have guessed, She would never forgive me. What you should nevertheless try to keep in mind, is that the clues as well as possible interpretations are numerous. This may include dialogues, an act carried out by a character, text found on T.H.I.S., a location with a story, but not only... As even the lack of clues can give you something to think about! For instance, if a usually talkative character stops posting updates on T.H.I.S., there’s likely to be a reason. As I am sure you have now understood, Don't Kill Her rewards the curious.

I have yet to choose the subject of the next update, maybe a little more information regarding the timeline or T.H.I.S. Lets wait and see what She will be willing to whisper in my ear.

Anyhow thank you again for your outstanding support, without you none of this would be possible!