RA:APB Producer Chronojam talks about the new stats system on the official server, and coding and graphical updates for Gamma.

Originally posted by Chronojam at www.apathbeyond.com edited for ModDB by Category5
I'd like to start with another thanks for everybody who voted for A Path beyond and Apocalypse Rising in the 2009 ModDB Mod of the Year awards. As has already been brought up, both A Path Beyond and Apocalypse Rising received an Honorable Mention and it really is quite an honor, you see.
In order to qualify for a "placement" we would have needed to have a substantial update in the preceding year and place better than before. Naturally this is a very difficult thing to do when you were Second and Third Place, respectively, in prior years. Apocalypse Rising of course remains unreleased, and Cold Fusion itself is also not a huge release and was not really intended to be. Note that Renegade-X placed 5th and the venerable C&C Shockwave placed 9th, congratulations to them; they're worth checking out.

Gben, of CNCNZ, is putting together a series of insightful interviews to get a feel for C&C modding from the modders themselves. He has asked a number of questions of the staff of the 20 C&C mods that were in the running for Mod of the Year, A Path Beyond included. The results will be published in the order they were received in I suppose, which makes us first on the list. If you're wondering just what the heck thought processes are behind A Path Beyond, check out the article and don't be afraid to look around CNCNZ's other writeups, they've got great stuff always.

New Stats System - In case you missed it!

You may have caught the news items here, or on the Mp-Gaming forums, or even stumbled across it yourself. The past couple of weeks, Oxi's had the new setup in place and it's going pretty well. Many of the promised additions to the ranking system, such as persisting clan ranking support across public games, is in there now. Have a look at the new live rankings site!

Glancing at it now, you will note that (similar to forums) the newest player to start is mentioned. As of writing, "there're 1175 registered players on the server, the newest player is Tooncy" and let me add that it's great to see a lot of old faces returning, including players like Tooncy; you may have also noticed the likes of Hydra wandering back recently. You can also see a live map of players, showing APB's worldwide playerbase in action. Right now, I see players from across the US, Germany, Philippines, Ukraine, Singapore, Thailand, and Australia. Probably because I'm up rather late, but there you have it!

You should also notice the awards have been updated. You can now earn the "Mod is Dead" award by killing Bluehell Productions and Mp-Gaming staff, testers, and moderators.

Needless to say, Jonwil and company have been busy. A bunch of memory leaks have been fixed, the network issues have been cleaned up a bit, that kind of thing. We've been working with builds that actually show how many updates individual game updates receive over the wire to diagnose why some things might experience more "lag" than others. Anyways, the latest news is that the shaders support is coming back in full force again. It's been reworked significantly, and with this news there's a bit of a push to re-apply normal maps and specularity and all that great stuff to newer models like the Flame Tower shown not too long ago. There is also a new fog system so we can effectively layer fog-style effects; weather, water, gap generators, that kind of thing.

TheBeerinator and ChopBam are working to retexture the hell out of all of our maps, or at least fix some of the older and uglier grasses and such. It's going to take a while but it will be worth it. Chop's been absorbing all the old maps from their nasty gmax format into a friendlier 3ds format to make adjusting textures and terrain a lot simpler, so there might be various enhancements to existing maps beyond just texture work. R34ch was actually last seen working on a new look for the Allied Artillery and also a certain high-flying Soviet aircraft known for dropping parabombs.

Here are some shots of Zama and Bonzai, too. Note that Bonzai has its Gap Generator as originally intended and the Soviets have a fierce Tesla Coil to defend themselves, instead of a couple insufficient Flame Towers. Thanks to Westy for grabbing these shots, and Deadpikle is currently planting foliage here and TruYuri for doing LevelEdit work and it's quite the team effort these days. These have not yet had their terrain/textures touched at all, but it will probably happen along the way. It also probably goes without saying that the lighting and weather are not final for Gamma, so take what you see with a grain of salt as they say. 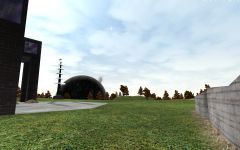 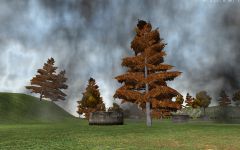 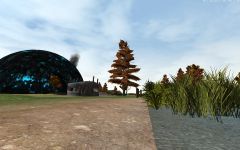 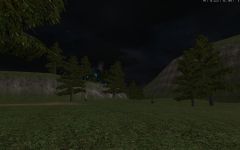 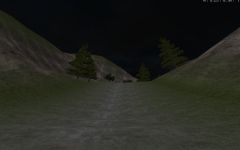 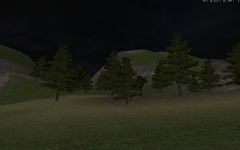 Sweet stuff if I skimmed through that right. :)

A "Mod is Dead" achievement? That made my day :P