Posted by EleonGameStudios on Oct 20th, 2016

Many of you have already tipped your toes into the Experimental version of Empyrion Alpha 4.0 - so please, ladies and gentlemen, switch to the public version right now!

For everyone else, and because we added a ton of new stuff and a few game-changers, please read on below to get all the info!

We are looking forward to your feedback and, as always: thanks everyone in advance for helping to squash the remaining bugs! :D

P.S. We recommend starting a new game in Alpha 4.0. Please note, however, that your old save games are technically compatible in Alpha 4.0 but the visuals (e.g. light intensity - especially during night) will be messed up due to the switch to linear space (see below).

1. Auto Mining Device:
- Added terrain-placeable auto-mining device with 3 Tiers
- Possibility to upgrade from T1 through T3
- Mining rate depends on the Tier and the Source Quality (dependent on the size of the deposit) 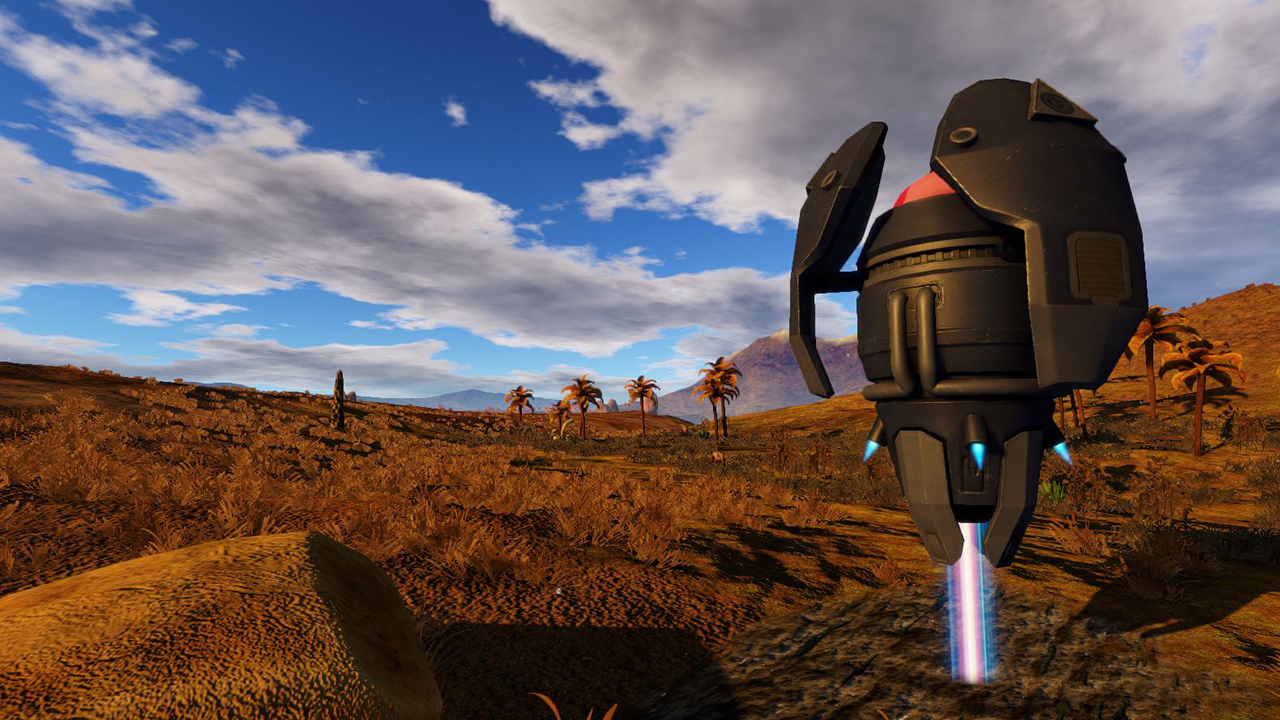 2. New HV Handling:
- With the new HV handling your HV will now adapt to the ground, i.e., it will no longer remain horizontal if you drive up a hill
- The new hover engines apply a local force below them (somehow like a virtual wheel). Thus, the position of hover engines and distribution of weight plays a big role now
- Added visual overlay for "Center of Mass" and "Center of Vessel" (Use building-helper menu to show; default button: N)
- Added artificial mass block that adds additional weight and can be used to balance the Center of Mass of the vessel for improved flight and hover behavior
- Added T1 and T2 hover engines with new 3d models
- Added Hover Booster device that allows HV to perform jumps (old Hover Engine Model)
- Changed HV starter block: no hover engine placed on starter block anymore
Note: HVs from blueprints and from the workshop need the new hover engines to be added. The old “Hover Engine model” now only adds the Hover Booster feature to your HV but it will not make it hover 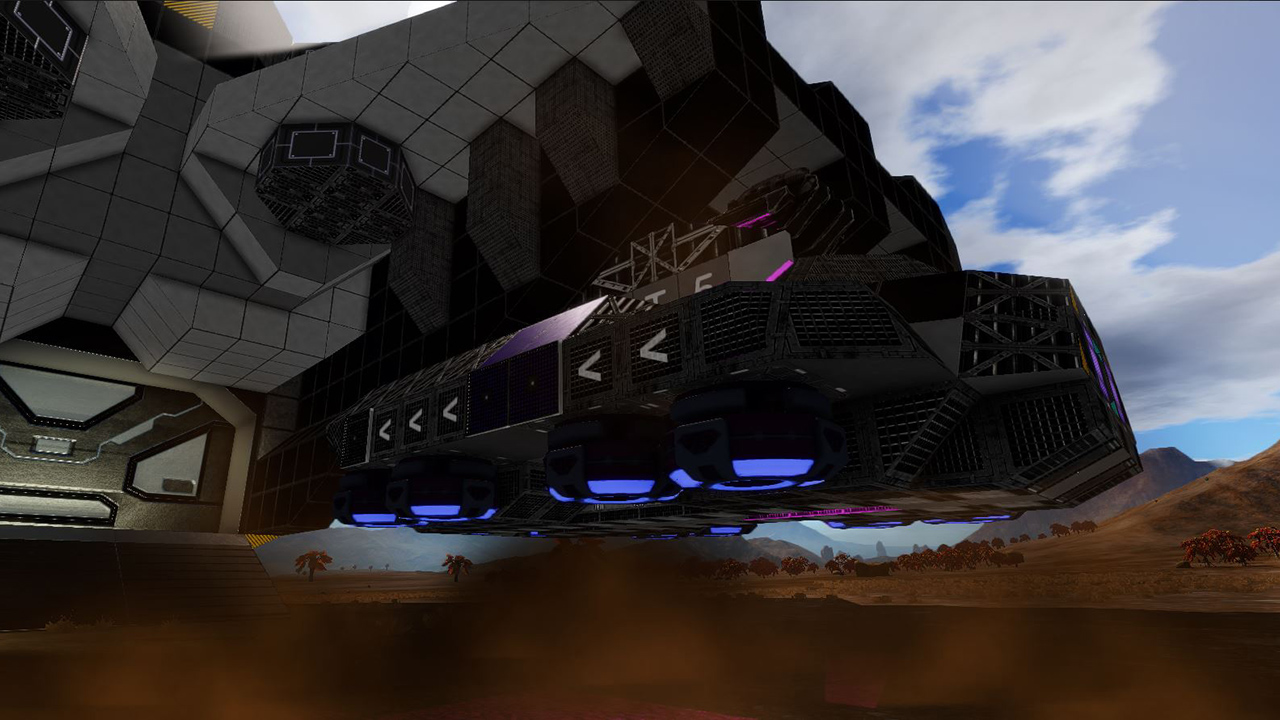 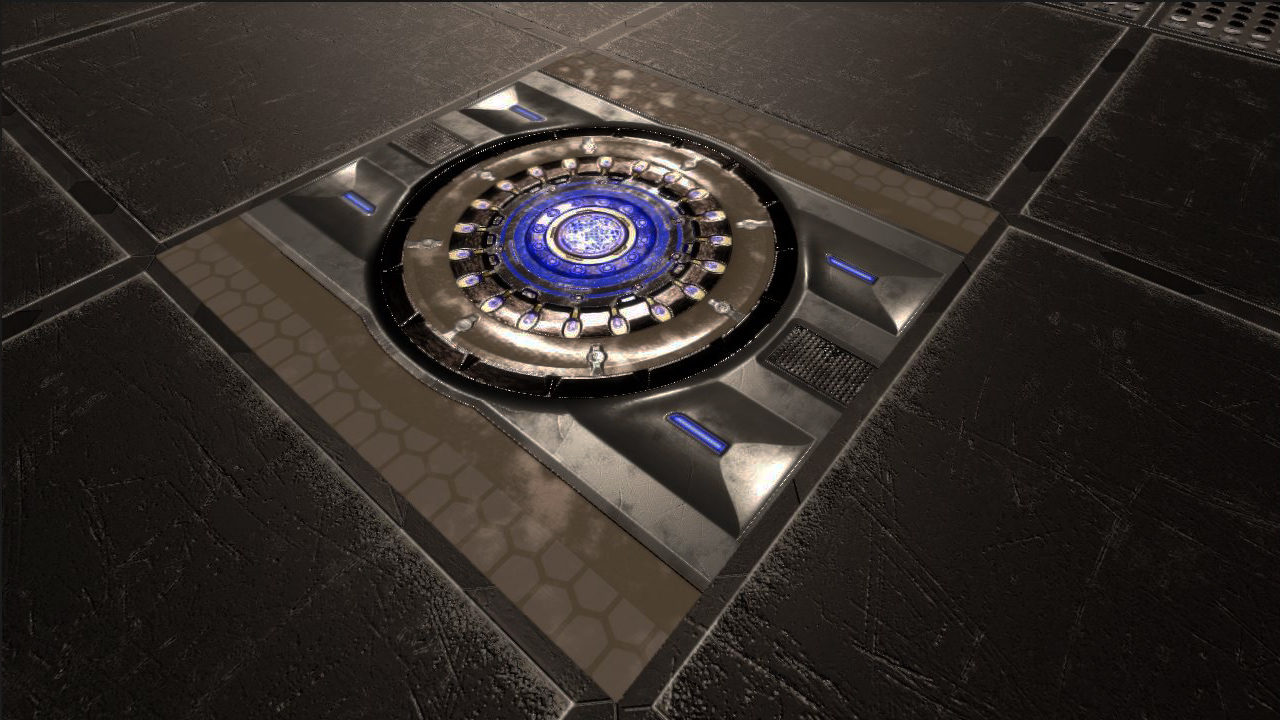 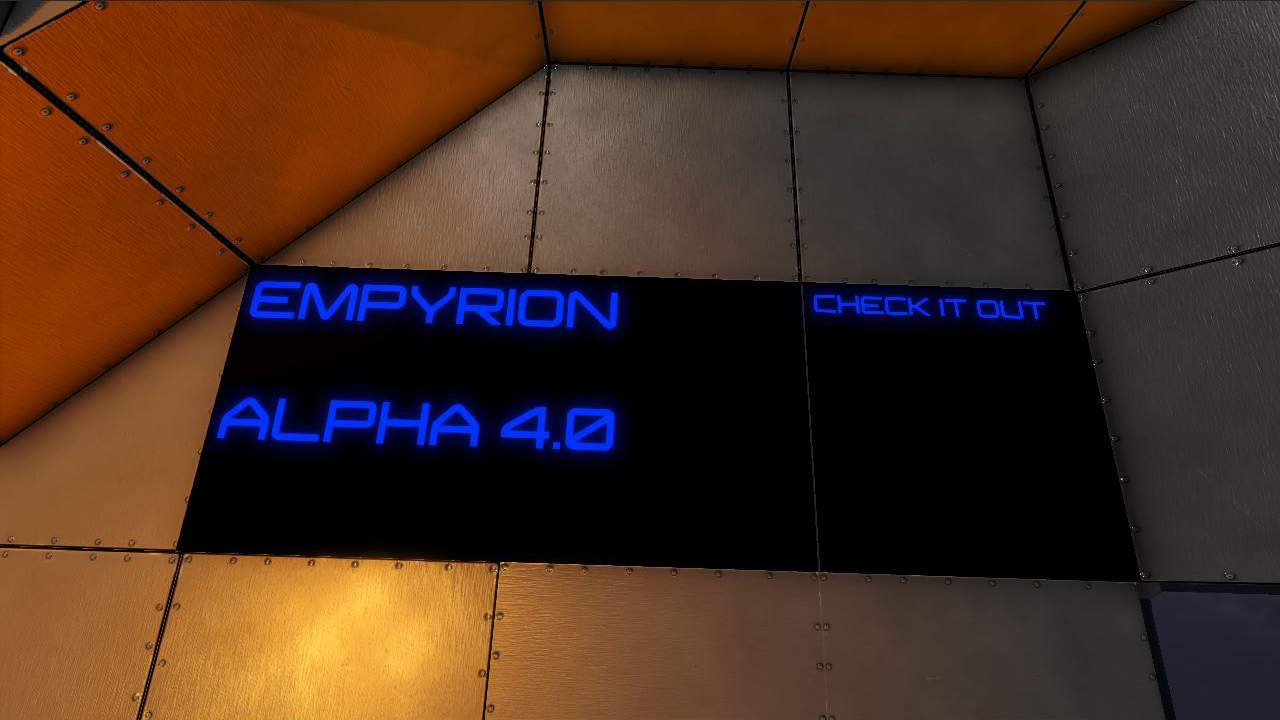 5. Ship Registry:
- Structure overview window with “Waypoints” and “Show on Map” feature
- The registry list shows all your vessels and bases anywhere in the solar system
- If you are in the same playfield, possibility to access certain features of your vessels and bases via Control Panel remote access (e.g. turret settings, power up or down, etc)
- You can set a waypoint as a guide or show the position of the selected target on the map
- Structures that are chosen as waypoint, are now displayed in yellow on the map and have a yellow arrow and tag on the HUD (remove a waypoint by clicking on the waypoint button again; you can have more than one waypoint active at the same time) 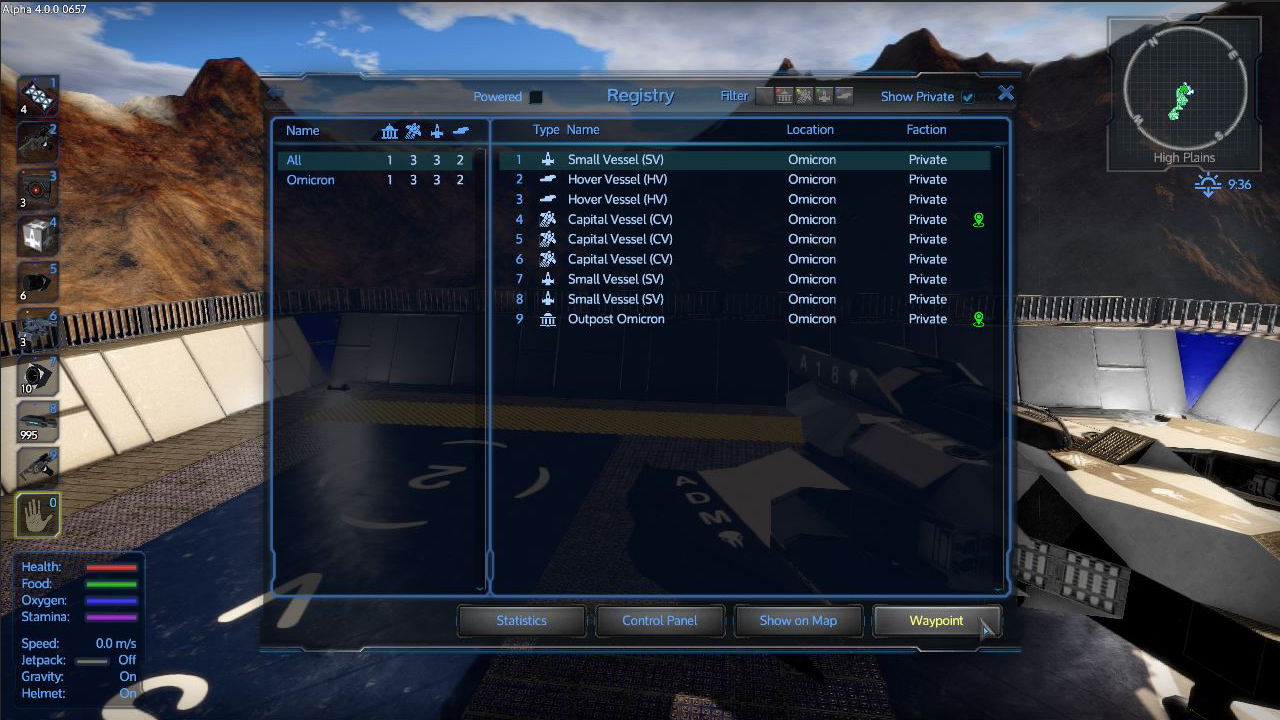 6. Faction-based Discovery System:
- Added player-centered discovery for multiplayer (i.e., when a player discovers a POI / deposit this discovery is no longer visible for everybody on server; players in a faction share their discoveries)

7. Separation of Small and Large Blocks:
- Separated small and large blocks (hull, windows, truss blocks etc): please note that we had to re-balance the weight of many blocks; Small Blocks = SV,HV; Large Blocks = CV,BA
- The separation will allow us to make a much better balancing of hitpoints and weight
- CV and Bases got more hitpoints for their basic building blocks and windows (for example: Steel 500 HP, Hardened Steel 1000 HP, Combat Armor 2000 HP). As a result, they are now heavier and need more materials when crafted.
- All hull, window and truss blocks are automatically updated to the corresponding new block when spawning a pre-Alpha 4.0 BP. Please note: Pre-1.0 Alpha Blocks are not auto-updated. Blueprints that still have these blocks will be shown as RED in your blueprint library. You still need to swap them manually.

8. New Weapon Balancing (Step 1):
- Rebalanced all mounted weapons and turrets - let us know what you think
- Separated CV and BA turrets as preparation for upcoming CV-BA rebalancing (their stats are identical at the moment; subject to change!)
- Added homing missile to Turret Rocket (BA / CV): the homing missile will follow the attacked vessel during a certain time. These turrets will now be much more effective against fast moving targets.
- Added new Pulse Laser Turret (BA and CV)
- Added Flak Turret for CV
- Added Minigun Turret and Artillery Turret for BA
- Adapted ammo templates to new balancing
- Balancing Stage I: Added limit to number of mounted and turret weapons (performance and balancing reasons). "Max Count" indicates now how many weapons can be placed on a structure for Survival Games.
Please note: Blueprints that violate these limits will be shown as ORANGE in your Blueprint Library and can not be used in Survival mode. You can still spawn and change them in CREATIVE mode - or use them in multiplayer if the server admin decides to disable the Max Count.
- Added 'EnableMaxBlockCount' in dedicated.yaml (thus you can disable MaxCount on your dedicated server if you prefer) 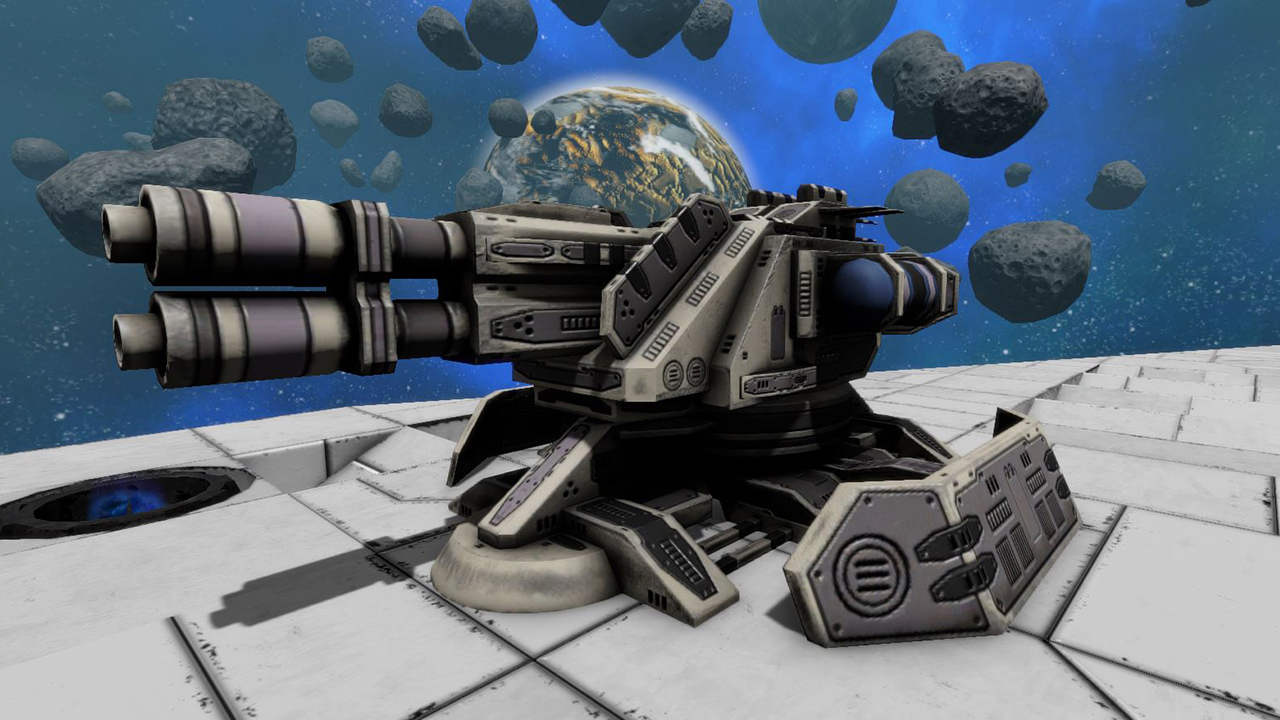 10. ATM Machine:
- Added ATM block: With ATM machine you can transfer money from / to account (you now must use ATM to transfer money to your account; Open ATM GUI and add money by dropping gold coins and credit cards to the intake ; Remove money by creating a moneycard; It is not possible anymore to “consume” stacks of Gold Coins or Credit Cards for adding the value to your bank account!)
- Replaced credit card with a money card that can hold a flexible amount of money

11. Switch to Linear Space:
- Switched from gamma to linear space: this change had a major effect on the overall lightning in the game and how the physically-based rendering (PBR) works. If you want to read more about gamma vs linear color space, check this out:
Docs.unity3d.com 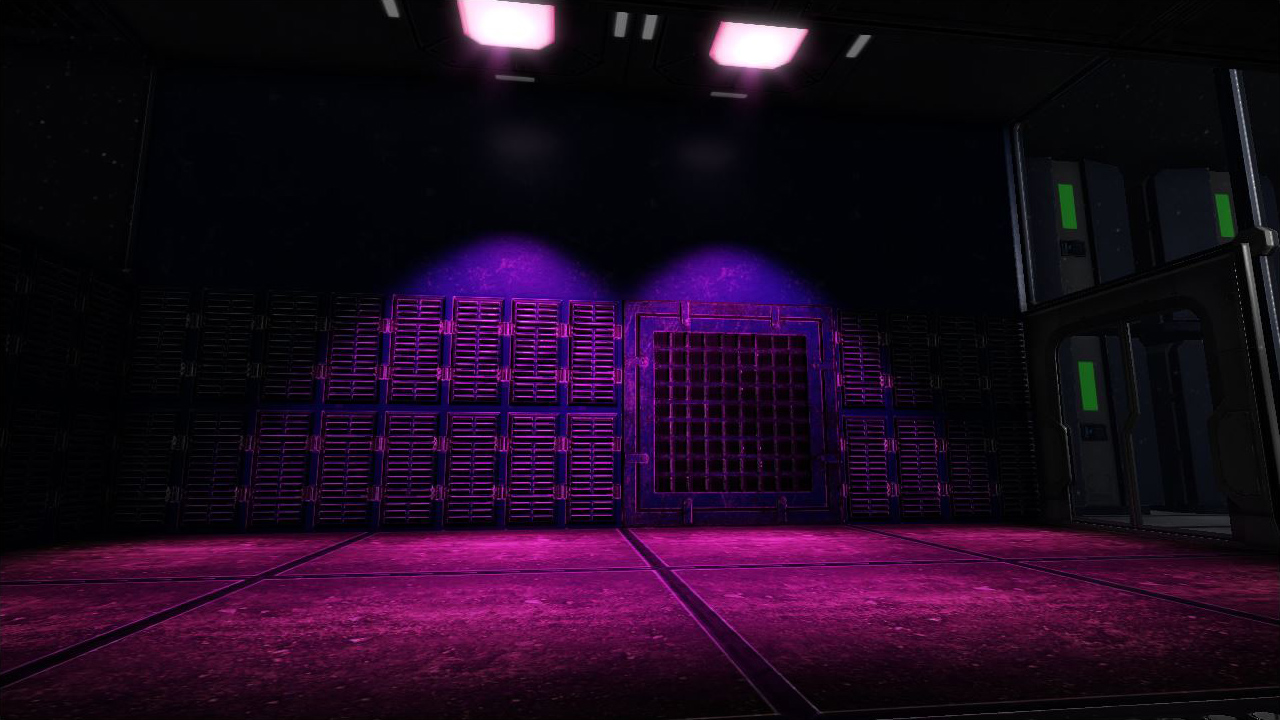 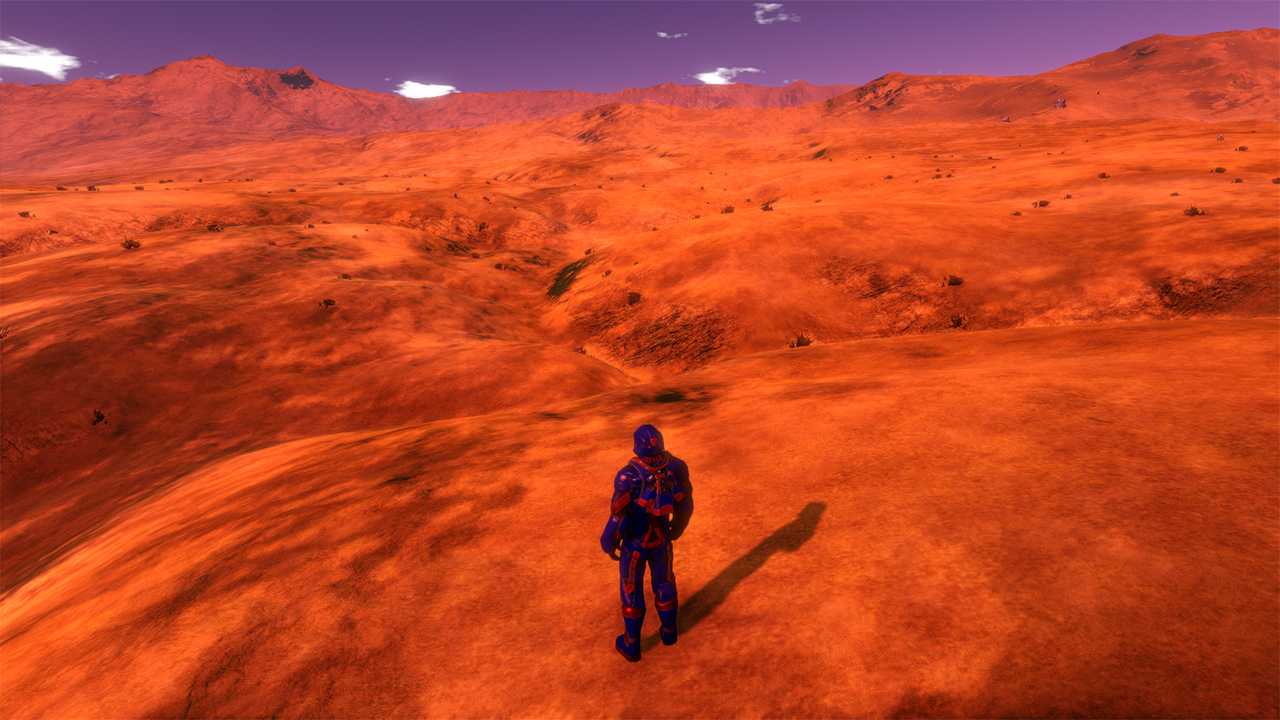 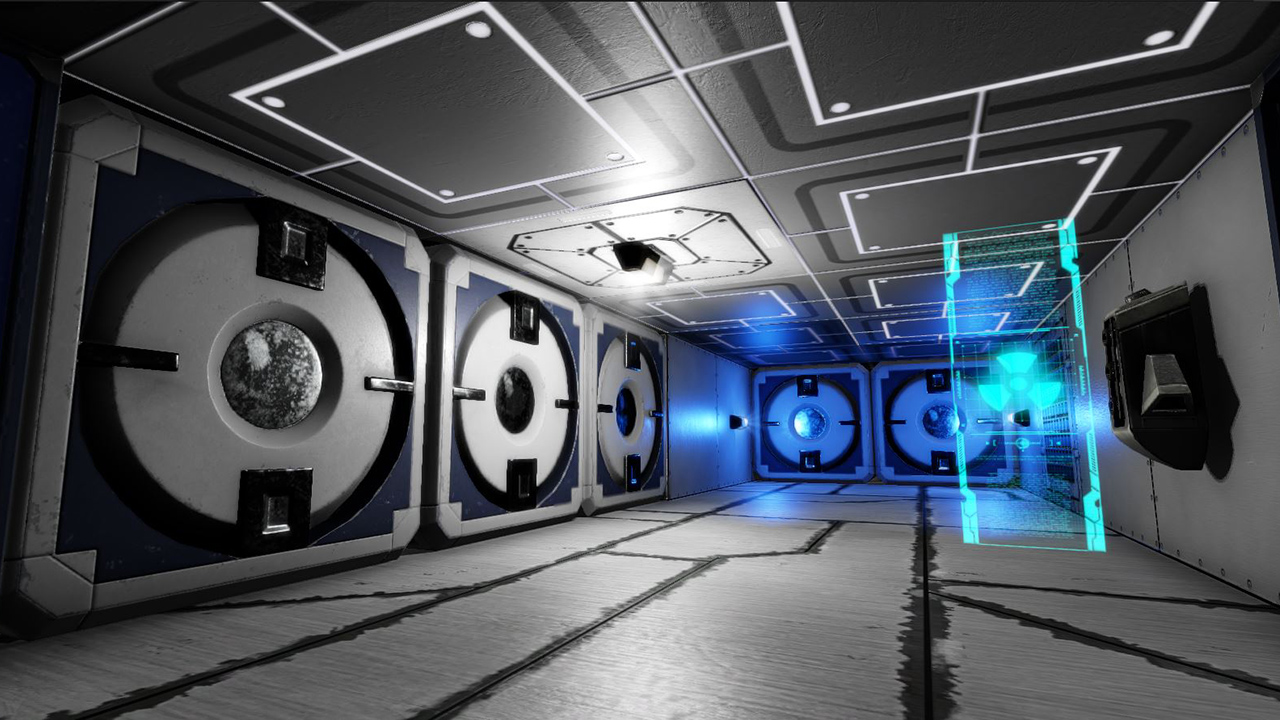 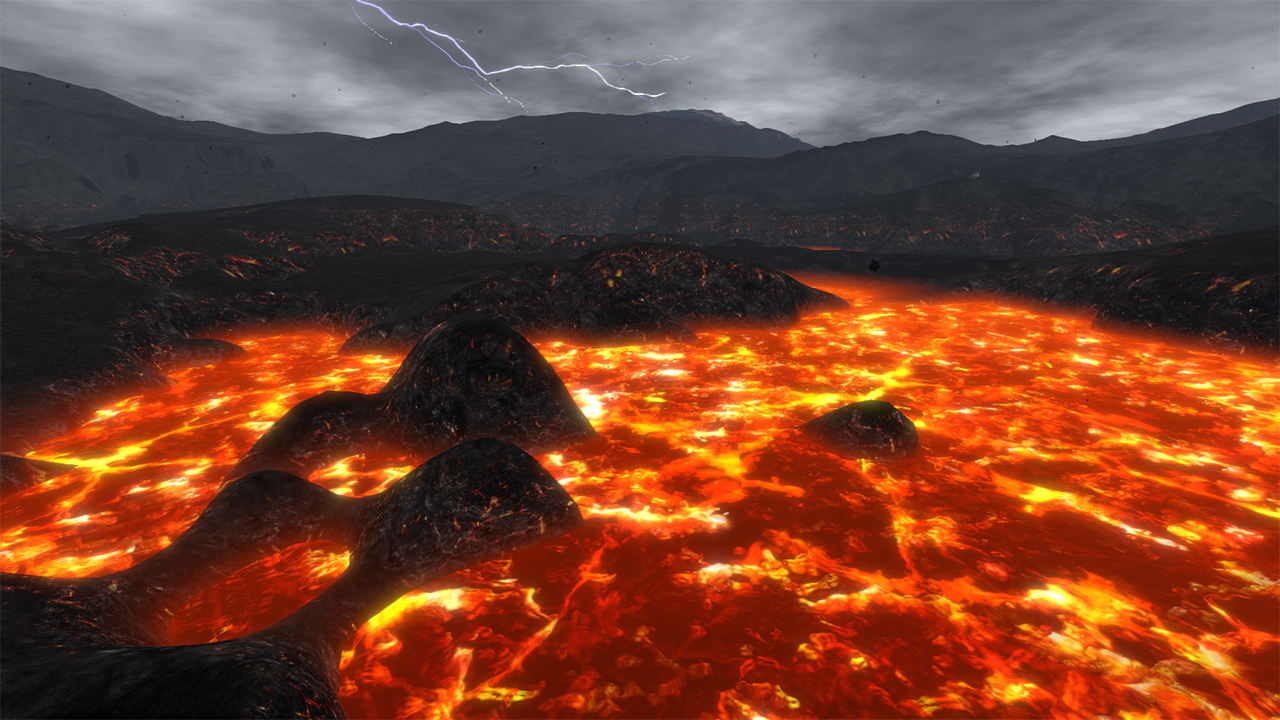 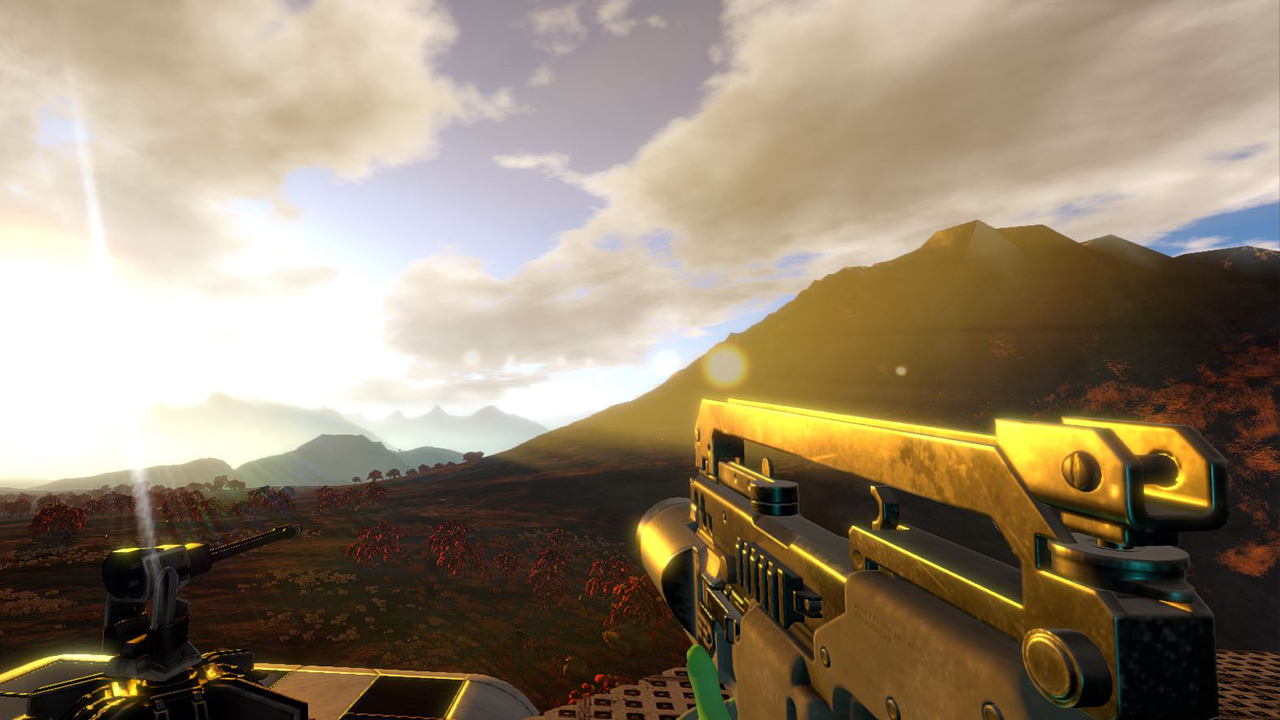 It is hard to capture the effects of linear space in screenshots - just start the game and convince yourself of the new lightning and the different look & feel of linear space (btw: in the last screenshot you see the new Multitool T2)

12. Dynamic Character (UMA):
- Added fully dynamic character (so called UMA): for now you do not see any difference to the old model but with this new approach we will be able to easily change armor, jetpack, etc on the character. In addition, we will be able to integrate character customization (face, hair, beard, size, etc).

13. Separation of Client and Server:
- Client and server are now separated
- You can download “Empyrion - Galactic Survival Dedicated Server” from the Steam client via Library -> Tools
- If the Empyrion dedicated server does not show up under Tools in your Library, you can install it via SteamCMD as follows:
a. Install SteamCMD from Developer.valvesoftware.com
b. Open console/command line prompt and navigate to the directory you installed SteamCMD
c. Enter the following command:
steamcmd +login anonymous +force_install_dir "../Empyrion - Dedicated Server" +app_update 530870 +quit

Multiplayer:
- Added "Faction Access" and "Show on Map" button to (Emergency) Oxygen / Hydrogen and Water Generators
- Allow faction visibility even when all players are offline + show new faction stats information
- Huge network optimization
- Motorbikes now gets removed with wipe time (problem before: on busy servers there are many abandoned motorbikes which reduces performance)

Bug Fixes:
- Fixed: Button-Click macro exploit to duplicate items
- Fixed: Rockets now don't explode any more if they hit their 'own' structure
- Fixed: Problem that Offline Protection did not activate for private faction (now you don’t need to create a 1-man faction anymore to use the offline protection)
- Fixed: PvP: Own faction base will shoot at spawned vessels of faction members
- Fixed: Constructor does sometimes eat up material but do not produce items (Constructors and Food Processors now use a special Output Inventory to store crafted items)
- Fixed: Turrets of CV set to Public does not engage enemies
- Fixed: Jumping of focus block. Now: interpolating focus block positions (+ we do not show block preview if block is not allowed to be placed)
- Fixed: Grass is overlapping mountains
- Fixed: Wrong weight count on blocks (now each block weights exactly amount that is shown in block info)
- Fixed: Upgrade Window: Tint reverts when upgraded
- Fixed: Checkbox of turret when deactivated and accessing it
- Fixed: Light bleeding when shadows are on (e.g. lights of bases do not shine through doors anymore)
- Fixed: Status effect notifications delay all other notifications
- Fixed: Player Status: Icons overlapping each other if more than one effect is in place
- Fixed: Wind animation on several trees / plants (e.g Omicron Alienpalmtree, Akua Umbrella tree etc)
- Fixed: Key for Flashlight: rename to LIGHT only
- Fixed: Water shader with errors (e.g. water shows mosaic texture in the night)
- Fixed: Potential error is in Peer2Peer another player connects while we are starting up
- Fixed: Problem that beam of texture tool was sometimes cut off
- Fixed: Lava emissive texture not working
- Fixed: Gaps on hull block HalfRound
- Fixed: Marketplace - wrong time sorting in the "Recent" list
- Fixed: Error when opening PDA in creative as a client
- Fixed: Strange Colouring when placing Walkway/Truss Blocks
- Fixed: Bike "slides" instead of driving - as observed by a 2nd player in MP
- Fixed: Problem with missing chunks on terrain
- Fixed: Durian Sprout only attributes a fraction of XP compared to all other sprouts
- Fixed: Thrusters firing with full force when CV/SV are hovering or landed
- Fixed: SV/HV thrusters still firing full throttle when docked
- Fixed: Hovering CV/SV is falling to the ground when pilot leaves the seat
- Fixed: CV and SV slowly sinking to the ground, despite hovering
- Fixed: RCS blocks show up on top of the water layer instead of diffuse underneath it.
- Fixed: Error if opening Texture Tool 2nd time via Player drone

I haven't played No Mans Sky yet but this sounds very similar .
Not a bad thing if it's a good game.

I have played space-adventure 'The Precursors' .,that was pretty good after fan patches were applied .