An unexpected accident delayed the release for about a month, but finally we reached this point that we release the version 0.4.
Major updates of v0.4 includes additional handheld weapons, adjusted weapon specs, and so many bug fixes.
You probably enjoy v0.4 the best by joining the servers where the unlock weapons are available. 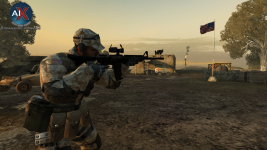 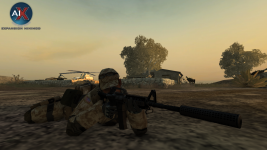 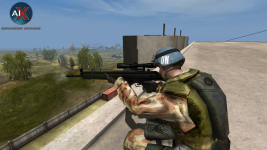 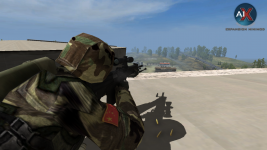 [New weapons]
- Added weapons: M4A1 w/ suppressor, QBU-88 Tactical, G3SG/1, HK23E
(HK23E's appearance would be the same as HK21E but the ammunition and firing RPM would be different)

[Tank/MBT]
- Added damage reducing to tanks.
(The amount of the damage depends on the angle that the AT projectile hits the surface of the tank. 50% of the damage in maximum would be reduced)

[Aerial vehicles]
- Adjusted specs of countermeasures. Flares falls slower, but it stays shorter amount of time.
- Any AA missiles would no longer chase the target after they fly past the flares.
- Added turret icon on the gunner's seat of attack helicopters. Player will know which direction he/she is looking at, regarding the direction of the helicopter.

- Changed the behavior of gunner's seats on F-14 and F-4
(so that the gunner can look around and shoot missiles any direction the gunner is looking at).

- Adjusted damages of miniguns on MH-6, UH-60, and Osprey
(so that they can't hurt tanks and APCs).


- Renewed the animations for pistols
(so that some pistols' iron sight is now accurate).
- Recoil animations of every pistol are now the same.


- Changed shaders
The effect when receiving explosion blast is increased, so that player's view would be more blurred, and the corners of the screen would be dark for a short while. Also, the visual of thermal vision screen is adjusted so the distortion of the screen is reduced.

- Extended view distance of objects
The visual distance of infantry, vehicles and some other objects that are essential to gameplay is extended so player can see distant objects better than before.

Finally, we introduce some of the people (=developers) who contributed to the release of v0.4.

And special thanks to Remdul from Forgotten Hope 2 modification who kindly provided shader codes to us/the MiniMOD.

See you soon in the battlefield!

Awesome, now i just need to wait for my internet to come back!

Sosad that I'm still not able to play this mod as it always crashes when loading map(texture). Can anyone tell me why?:(

Nice to hear from this mod again! But: You wrote we should play this on servers with unlocks available. Seriously? AIX is a Singleplayer/Coop mod. There has to be a way to unlock more kits for singleplayer/coop! It's a shame to have so many weapons but you can't use them all because the alternative kits are missing.

Apparently, the Minimod is focused more on multiplayer than Singleplayer/Coop. Thats what I read on the description on the front page.

Unfortunately, nobody plays this online! Would probably be cool as a LAN-game, but when you look in the server list, you're lucky if even one server hosting AIX (+minimod) pops up. Not even talking of people playing on it.
So Singleplayer is still the most important thing on such a modification IMO. Would love to see improved bot AI and such things.

They did do something to the AI, "Enhanced Strategic AI (Powered by Void)". All maps have bot support. Running this mod through the BF2SPCC program that came with the original AIX2 allows for promotions, but, I'm not sure about unlocks, though.