It's been a while since we had a dedicated Dev Diary! I think it's well and truly time for an update, don't you?

It's been a short while since our last update and we were thinking that many of you might just be starting to wonder what's going on with Ages of the Federation. Well, fear not, because we're here to bring you up to date with the mod's progress. Let's begin, shall we?

Many of you will have been following our livestreams and video updatres as theyve been released. For those of you who haven't, please subscribe to our YouTube and Twitch channels - we livestream on a semi-regular basis and subscribing is the best way to catch us live, working on the mod in real-time. It's a great chance to chat with us and ask us one-on-one questions about the mod. Here's the latest installment in the ongoing saga.

"Orion, I don't have the time at the moment to watch a ninety minute video that largely consists of Max and Gul making quippy yet charming and slightly flirtatious banter. What can you tell me about the mod right now?"

Well, as always the mod is proceeding at a cracking pace. In fact, it honestly continues to impress me just how far into things we are, given how comparatively short a time we've been working on Ages of the Federation. Armada 3 was in the works for a full year before it was even revealed to the public, let alone anywhere near ready for a release. 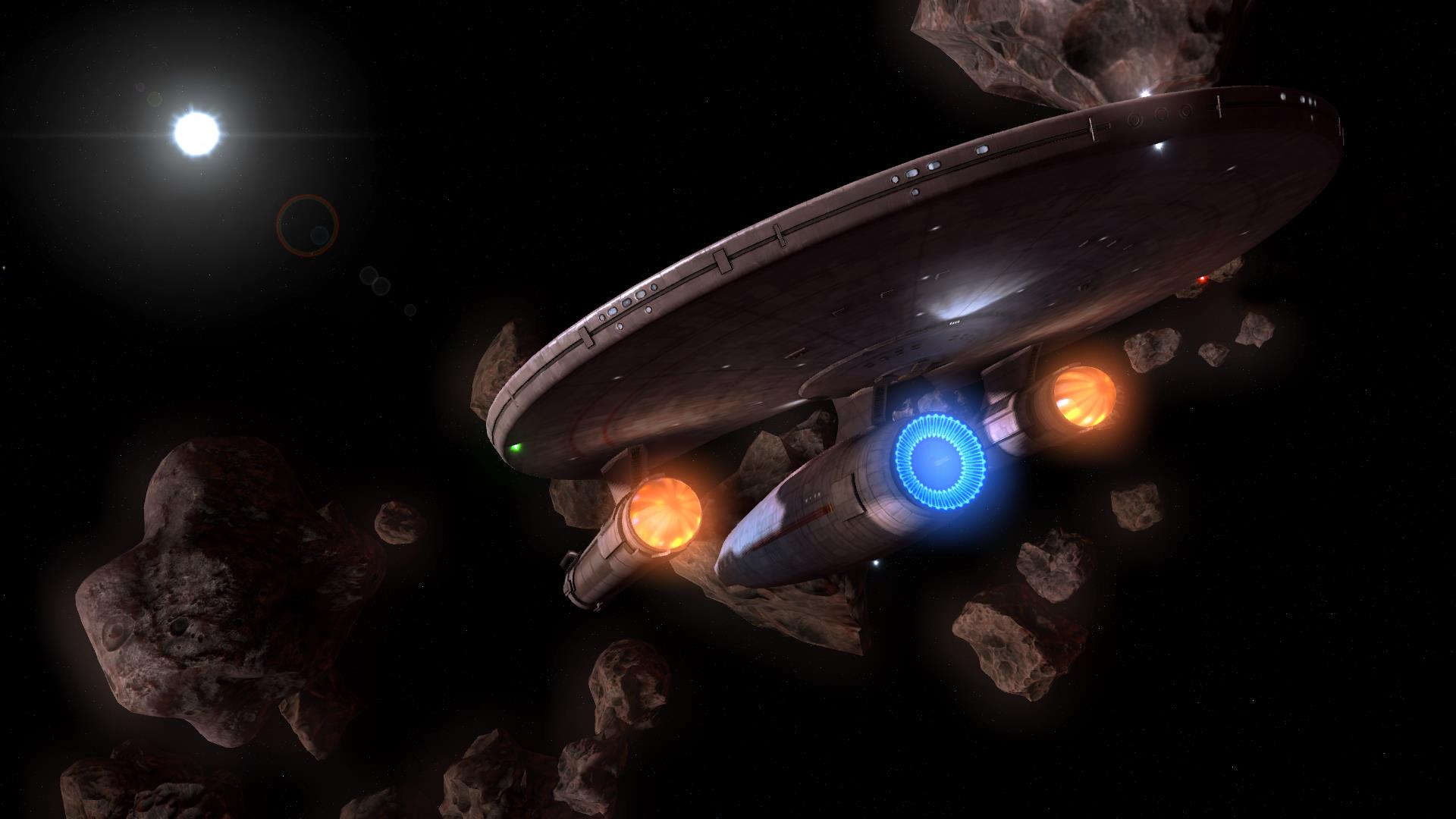 Max is steadily applying the Substance Painter treatment to more models, greatly increasing the level of textural detail you'll be seeing on the ships in your fleets. Those of you who watch the livestreams may have seen Max updating his models, so you've probably seen the difference for yourselves, but seeing them on a livestream and seeing them in-game are quite different things. I kind of wish I could show you just how pretty these ships look moving around in-game. But you'll all see for yourselves, in time. 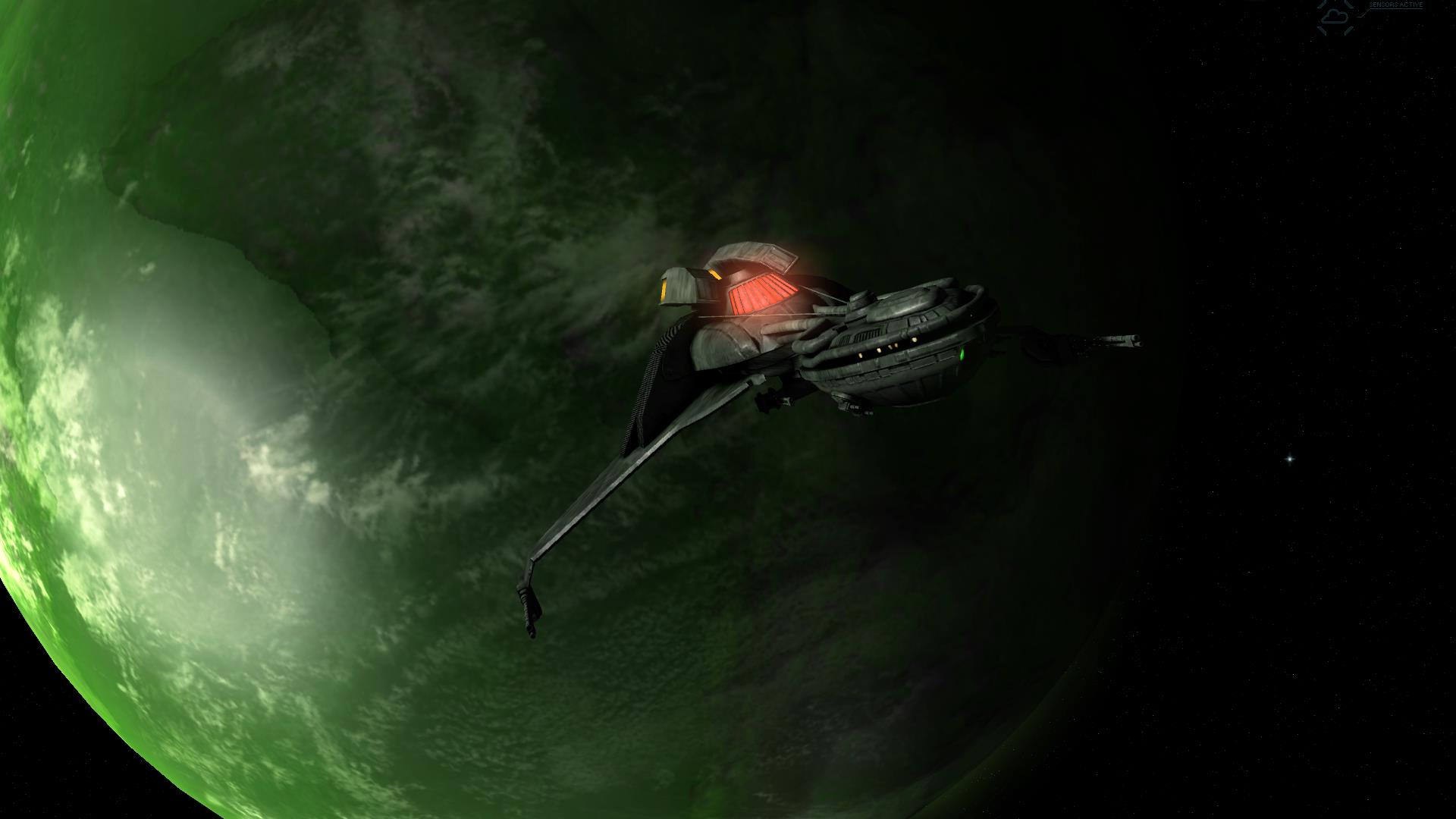 The Bird of Prey, a model by our late friend Amargosa, was one of the first ships Substance Painted

Hobbs has been hard at work creating more menu screens, most recently redesigning the Diplomacy Relationships screen to match our new UI. We're gradually carving the last stock elements out of the mod, and Hobbs' graphical talents have been invaluable. He's currently turning his attention towards creating new artwork for the Fleet Cap research screen. He's not quite finished yet but we're all really excited about the direction he's going in.

Meanwhile Gul, Masterchief and their fellow code-monkeys have been hard at work in the code mines of Galitep, toiling without sleep or food until, finally, the Federation fleet now has a full list of functioning special abilities. 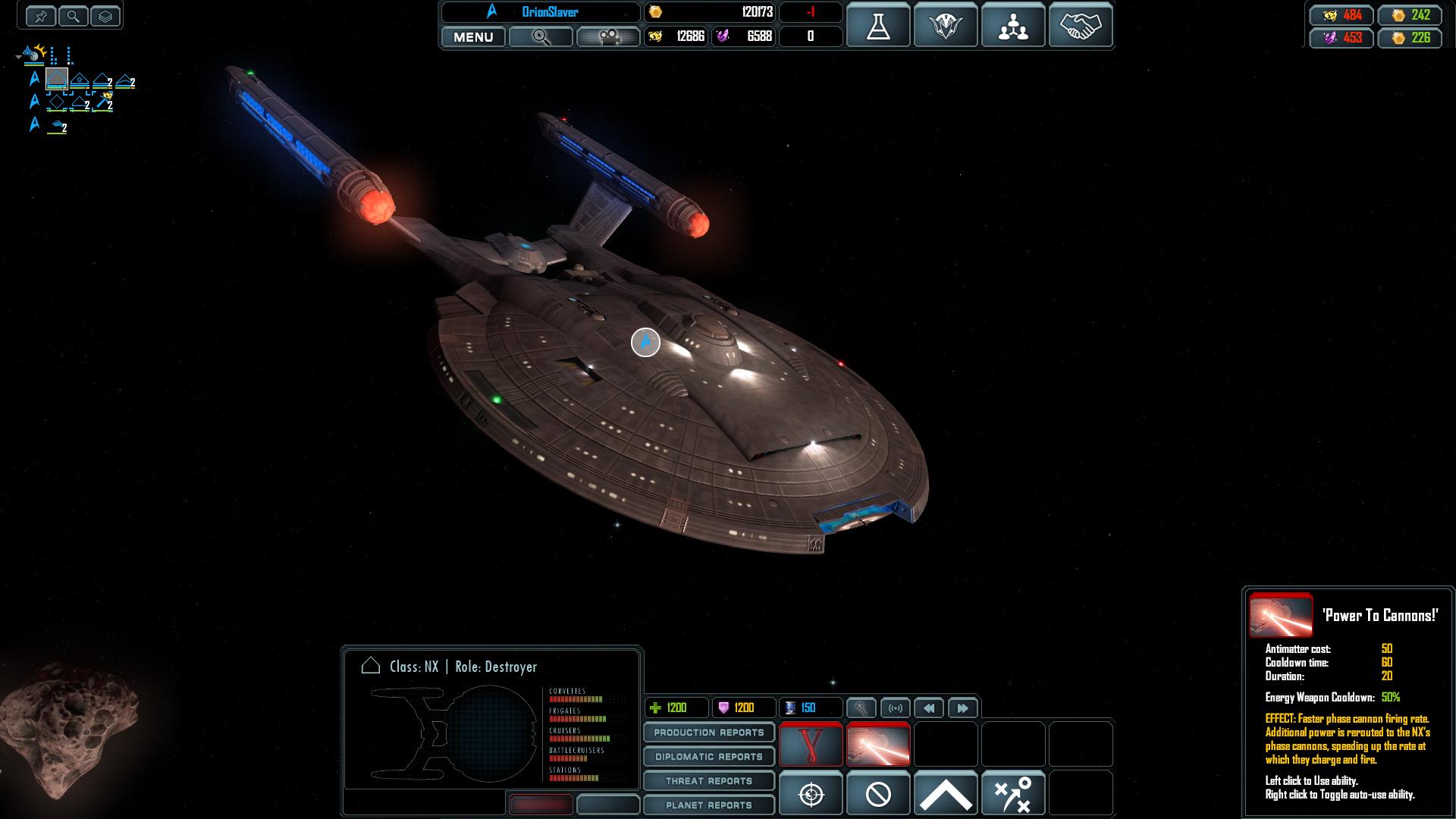 Such is their progress that they've already started to make significant inroads into the Klingon faction. Both the Federation and the Klingons are now considered playable (at least for basic dev test matches), though both still need a great deal of work before the mod is ready to be played for fun. We'll get around to the Romulans soon enough. 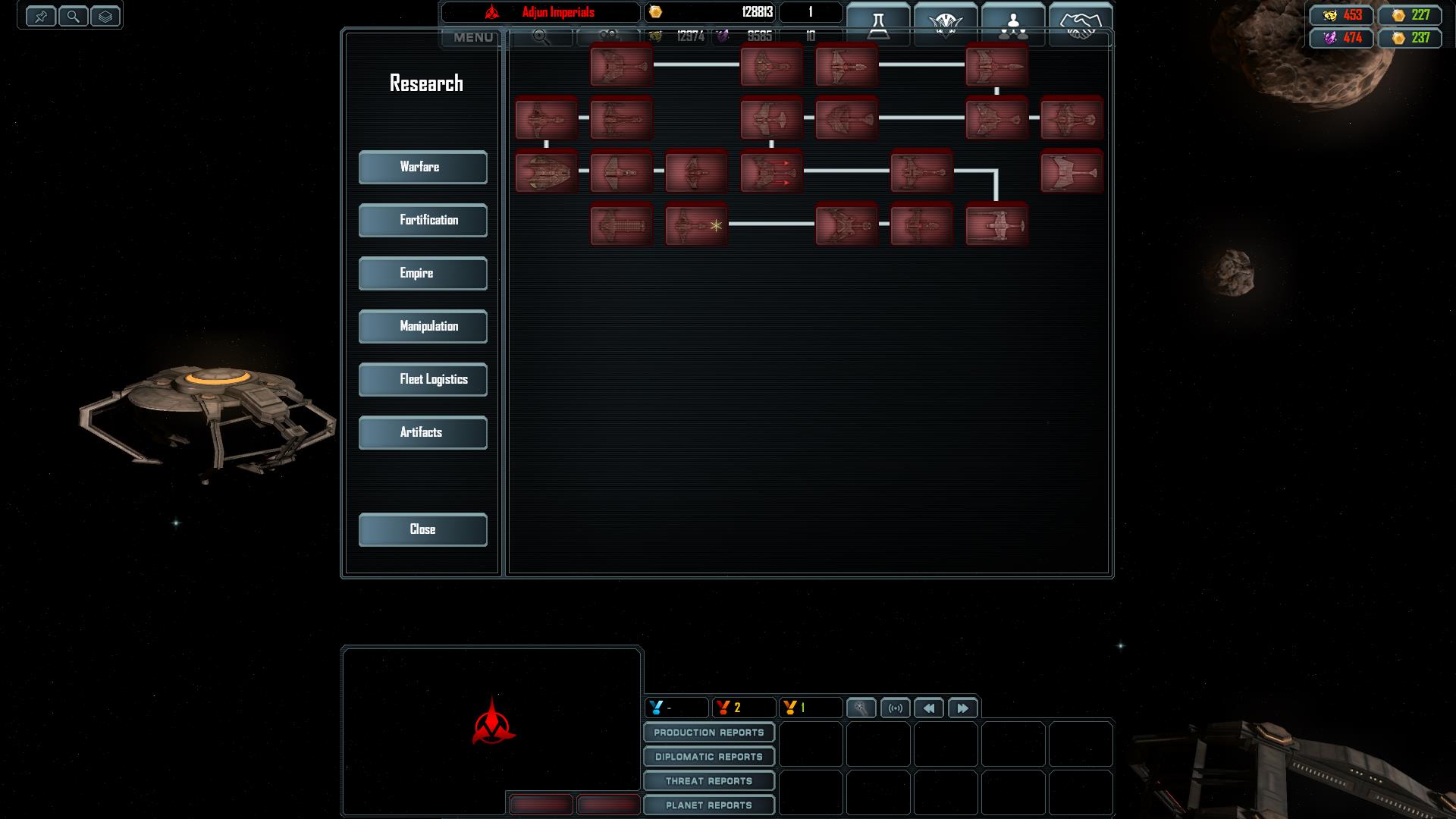 The real work has finally begun on the Klingon faction

Meanwhile, I've been plodding away steadily, writing out string descriptions for various special abilities and research options. As a team we feel that in-universe lore, storytelling and fluff are important parts of creating an authentic-feeling Star Trek experience, giving our mod that extra little bit of 'flavour', as Gul puts it. Why would anyone want to eat a mod? That said, it's a contribution that I'm so far enjoying, even if there are still a LOT of them to do. 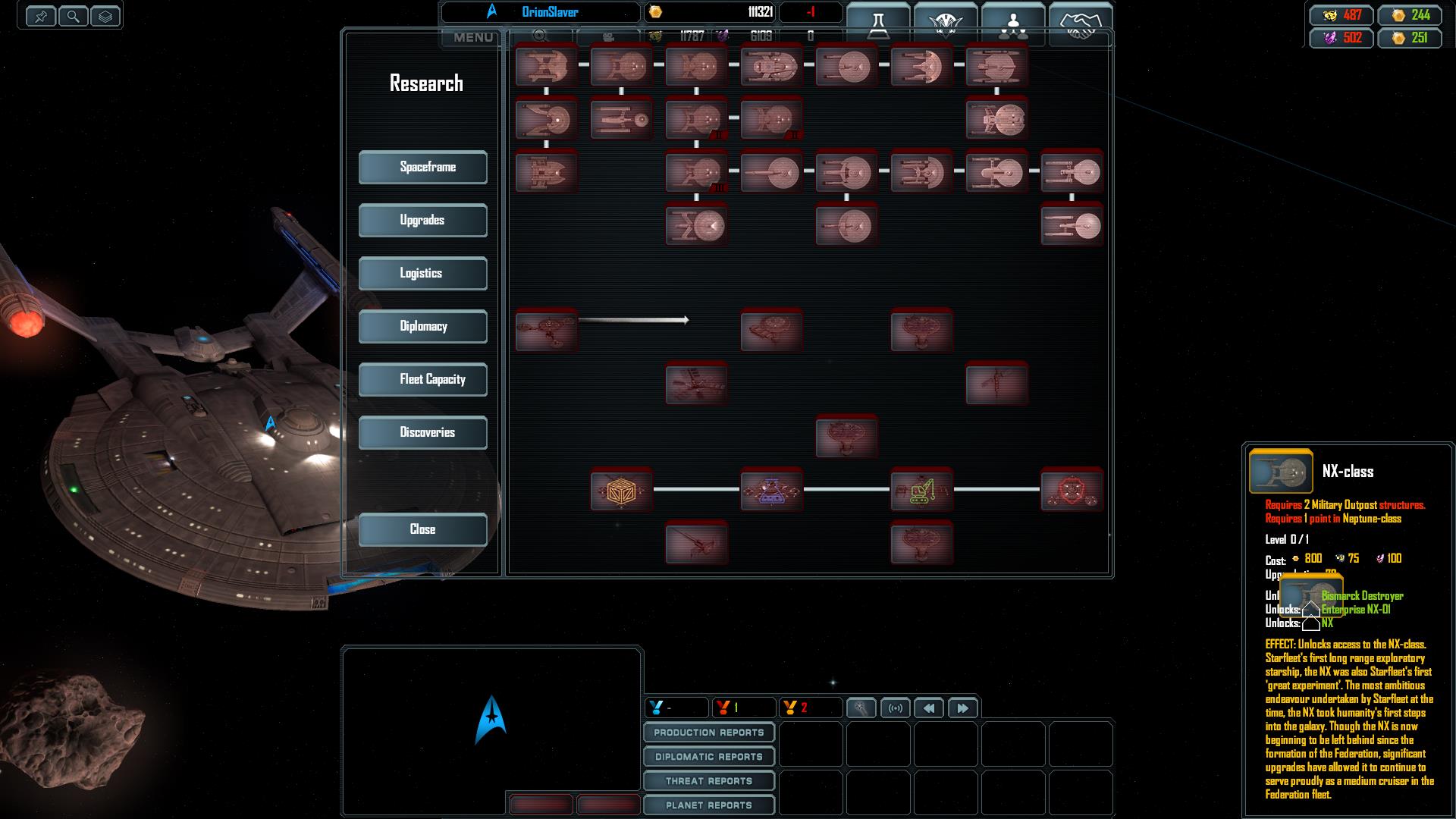 Highlighted in yellow are the ramblings of a blithering idiot

Finally, something that has me particularly interested - Neph recently popped his head above ground, coming out of his specialised bunker just long enough to present us with a number of gifts that we're all pretty excited about. Not only has he completed the list of Romulan Starbases (more on that later), but he also seems to have been working in a frenzied state to revamp the entire pirate fleet, complete with a varied selection of Orion ships, defensive structures and even a Starbase. Seriously, we're all busy trying to get the main factions in a playable state, then Neph swings by, drops half the Orion Syndicate in our laps like a boss and rides off into the sunset. Bless you, sir. Bless you. 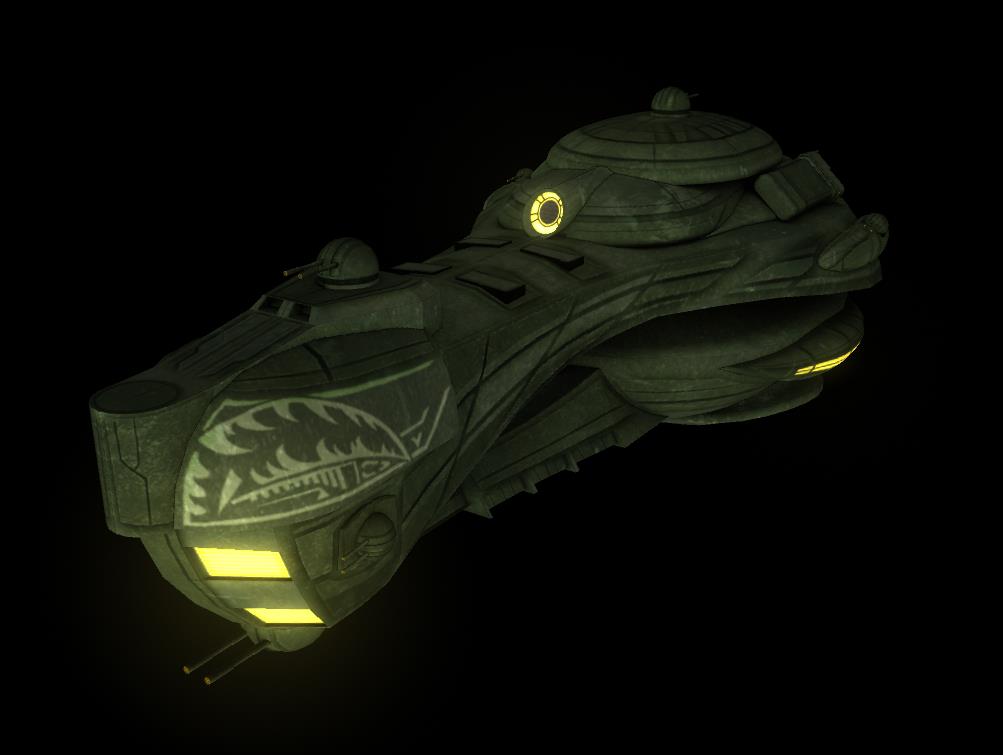 So there you have it - between updated model textures, new menus and research screens, a whole lot of coding, some description writing and a surprise horde of green space pirates, we've all been pretty busy. Ages of the Federation is coming along just fine.

That's all for now. Let us know what you think in the comments below. We'll be back with another update soon.

Max, the Loef himself, has recently run into some problems and is in need of some community support. Some unfortunate technicalities with the tax office have left him over 2,500 euros out of pocket, money that he, as a single young man early in his career, simply doesn't have laying around. As a last resort, Max has set up a GoFundMe to help ease the strain, if anyone feels like helping him out.

We'd like to thank anyone who chooses to donate for their generosity, but we'd also like to make a couple of things clear.

First, if you choose to do so, please consider your own finances before donating. You are under no pressure to donate so please only do so if you can do so comfortably. Again, thank you so much to everyone who chooses to donate.

Second, Max's GoFundMe is in no way connected to our mod work, and will not have any impact on Ages of the Federation. All donations will go entirely towards helping Max's personal situation.

Stellar Parallax is a strictly non-profit team - our mods are and will continue to be entirely free. We do not and will not accept any donations or funding of any kind, for any reason.

somewhere out there, there is an Overseer on the TR server in need of a blood transfusion because he looked at the max's streams and substance painting... oh and he might also need new pants.

Gul's been workin at Galitep?! Does that mean he has Kalla Nohra?

I like that you're using some Discovery symbols. (C&C logo appears to be based off the Starfleet Command logo from the show)

I know DSC is not liked much, but it has some great art.

Please don't add the -1 credit drain in this mod, many people really don't like it but if you do add it please have an option to disable it because it really kills the fun

All of this work looks absolutely amazing, you're delivering Triple A quality i've never seen in a mod before.
Absolutely great work, can't wait to try it out once you're ready. :)