Yesterday, a new version of Age of Chivalry was released. This new release fixes a critical installation problem experienced by many players in the previous version, as well as introducing new graphics.

All players should now be able to experience the features offered by the previous release, 2.01, including a rebalanced AI with further difficulty options, and dozens of new buildings, including new build sets for England, Scotland and Wales, and brand new monuments for England and Austria. 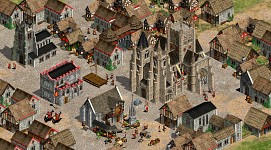 Version 2.02 also includes a new building set for Liège, with its own and distinct new architectural style. And of course, numerous bugs have been fixed, including a critical bug limiting technology availability for Flanders. Furthermore, a new real world map is now available: the Baltic Sea. You can now play on a map featuring the Baltic coasts of northern Germany, Denmark and Sweden, and fight for control over it on both land and sea.

Enjoy the latest release! You can download it, as well as the German language pack, using the links below:

i want the game in spanish :'v i can read english but it would be nice

Some dedicated fans are working on a Spanish translation, which will hopefully be released soon! :)

Can you make more new water, trees graphics ? pls. The whole game will be fantastic!! And add more object in the other (Gaia), I mean more decorate objects. By the way, thank u for this mod.

can you help me it's Said that i should but the age of empires CD
do you have any crack?

Is there a way to play AoC:H in multiplayer but not via lan? I used to play it with two friends every week but now we are in different parts of Europe and can't come together so often any more :(

I think you can also play via GameRanger, although I'm not sure if there's still many people playing it there.

There are new features in the official version, such as moving military units to a position and attacking whatever they find in the way, and the multiple building units creation with one same click.

You mean the HD version? The original game is just as official, of course. HD does not support advanced mod packs such as Age of Chivalry, which alter civilisations entirely, so Age of Chivalry will never be released on HD. But multiple building queues are also available in Age of Chivalry, anyway.

Its doesnt work
I have instal it on AoE 2 Gold Edition and its say "Failed to load triggers.dll" and when I try to run aoe2_x1 its just the original AoE 2 The Conquero Expansion

There is Russian principalities ?

I have downloaded this mod and it works perfectly fine. However, when I try to play in Deathmatch mode at hard (or hardest) mode, AI only trains cavalry units rather than training some other units (or unique units). I'm not sure if this is normal or there's need some improvement of AI. Also there's no command button for the units like formation, defense attack, no attack, and vice versa. Overall, the mod is great and fun.

heya! when I play my villagers I can not select them and the trees are also invisible
what I do?

i feel like the "taunt 200 to reduce my difficulty level" thing is a troll. i've done that, and the AI doesn't play any less insanely brutal than usual (and this is all on easy difficulty).