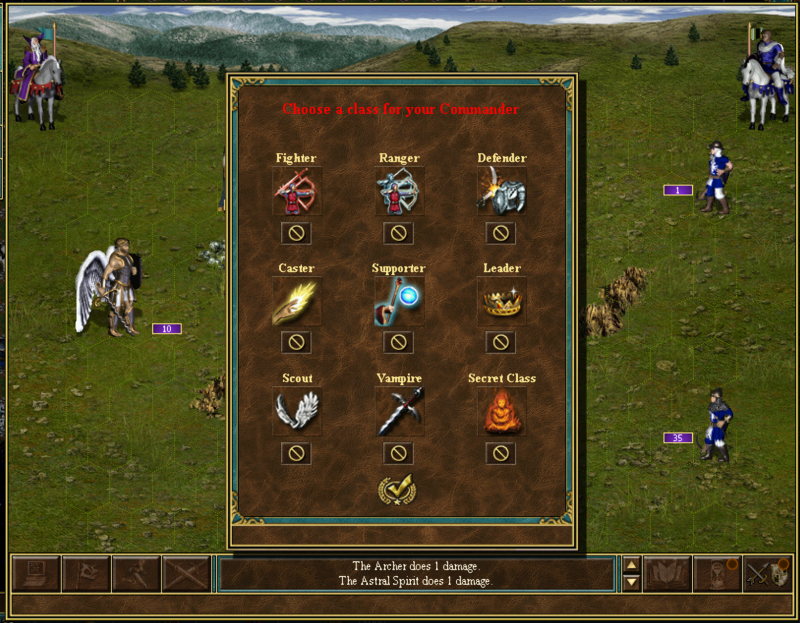 tldr;
New 1.072 Update
Make sure to install the newest ERA 3.8 including the ERA Framework mod, otherwise you will get erm error at map start.
Delete old version before install the new version.

How to install: How to Install ERA and ACM

The new version is ready. I decided to bring in some new content regarding the commanders. The new patch will allow you to customize your commander even more by selecting a class that influences how the attributes of your commander develop during the game.

With the patch 1.072 we introduce a new feature: Commander Classes
With the first kill of your commander, you will be able to choose a class in combat.
The following 9 classes are available:

Each class influences the attributes of your commander and can increase certain attributes further by killing enemies in combat.
Masteries: Each class has a unique Mastery that gets unlocked when having reached enough kills.

The 8 attributes for the Commanders are:

Attack - Just attack value
Defense - Just defense value
Damage - Just damage value min+max
Health - Influences total hit points
Speed - Influences speed
Spells - Influences the power of spells. Each spell now has a scaling with this modifier. Meaning it will also change the power of spells like Bloodlust, Magic Arrow, Power-Cure and so on. For different spells, the modifier will have different effects.
Passive - Influences the passive of every commander. Each passive now has a scaling with this modifier. Eg: the Brute will generate more gold with attacks, the Necro will raise more skeletons, the Astral Spirit will reduce the health and damage of enemies further and so on...
Aura - The leader commander emits a 1 hex aura that buffs allied units standing next to him. The effect gets increased. The range of the aura can also be expanded.

My hope is now that this system allows for many interesting combinations between the 4 out of 6 base commander skills and his class. Especially the new passive modifier will allow for many combinations if you like to play around with certain mechanics.
If it works out as I imagined or if the system has little effect remains to be seen. But I think it is cool and I will certainly play many games and will try out how the different classes and combinations play out.
By the way: Overall the power of commanders was reduced, so don't worry about them being too OP. However, I added an option to restore their strength to their former glory, just activate the option at map start.

The second big part of the patch was a complete refactoring of the level-up code. This was done by Berserker. Thank you very much, I know it was not easy to dive into my code
It will allow two new game modes to make everybody happy:
Choose Class - Allows to delay the class selection to accumulate enough class points until you can select your desired hero-class.
The Berserker Mode- Allows to learn any skill up to Master and Grandmaster level regardless of your hero class. Just classic H3 with 5 instead of 3 secondary skill levels

New "info" table. When right-clicking the experience icon in your hero screen you will be presented with a table that contains all numbers and information about your hero and his skills. This will allow you to follow in detail how the new skills effects scale.
For example, it will give you information about your First-Aid tent and its effectiveness in combat, your crit chances, your commander spells and much more. Overall this was something we clearly needed to keep up with the hidden formulas and numbers behind the new game mechanics.


Changelog
When updating from 1.06 please delete old version before installing 1.072

Patch 1.072 requires an updated ERA 3.8 including the newest ERA ERM Framework mod! Otherwise, you will be presented with tons of ERM errors at map start.

New:
+ New status list when clicking on the experience icon which includes many numbers and statistics
+ New Game mode made by Berserker that allows learning all skill to M/GM regardless of class
+ New Game mode made by Berserker that allows learning any class
+ Implemented new Commander Class System with 9 different classes for the commander, including a secret class that can be unlocked
+ All Commander artifacts received a rework and can now be worn by the hero again. Added 9 new unique properties.
+ Astral Spirit now has different passive: Instead of Enemy running away the damage and health of all enemies is reduced by 5%+C_LvL:5, resulting in a similar effect
+ Grandmaster Scholar now teaches level 5 spells

Balance:
- Reduced the power of all commanders to work with the new class system
- Breastplate of Petrified Wood damage block reduced, when all damage is blocked this will now be indicated by a sound
- Armor of Wonder damage block reduced
- Dragon Scale Shield, Quiet Eye of the Dragon +50 flat Magic damage block
- A few changes in SPTRAITS.txt (reduced the power of some AOE spells)
- Multicasting is now slightly more expensive
- Magic Wand +5% Magic Pierce, Pendant of Sorcery +10% Magic Pierce
- Mage Secret-Set gains crit/crit damage for every 2 fights won instead of 3
- Warrior Secret set slightly nerfed

Misc:
- Learning now shows exact %chance to gain primary skill point when visiting map objects
- Added a Battlelog entry when Heal Capacity is depleted
- Disable Tactics option now available in the map start option and fixed outdated trigger
- updated some help files
- Poison Icon for Commander added, thanks to Archer
- Removed FU 7701 from erm code to increase stability
- In Dif mod AI-Difficulty and Payday are now saved
- Removed FUN.erm from game folder, increasing compatibility and stability of the mod
- removed "BattleAIvsAIFix.dll", "remove theoretical battle ai vs ai.dll", "RK primary skill overflow.dll"0kb Now it is in your own responsibility to play with these plugins or not
- Information about classes when clicking on Att/Def/SP/Know icon removed, it is now all available in the Class-Table 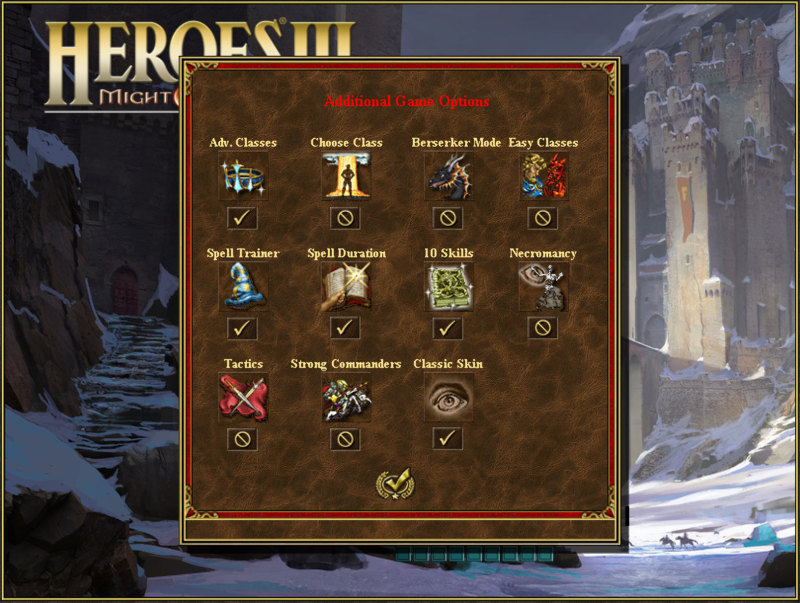 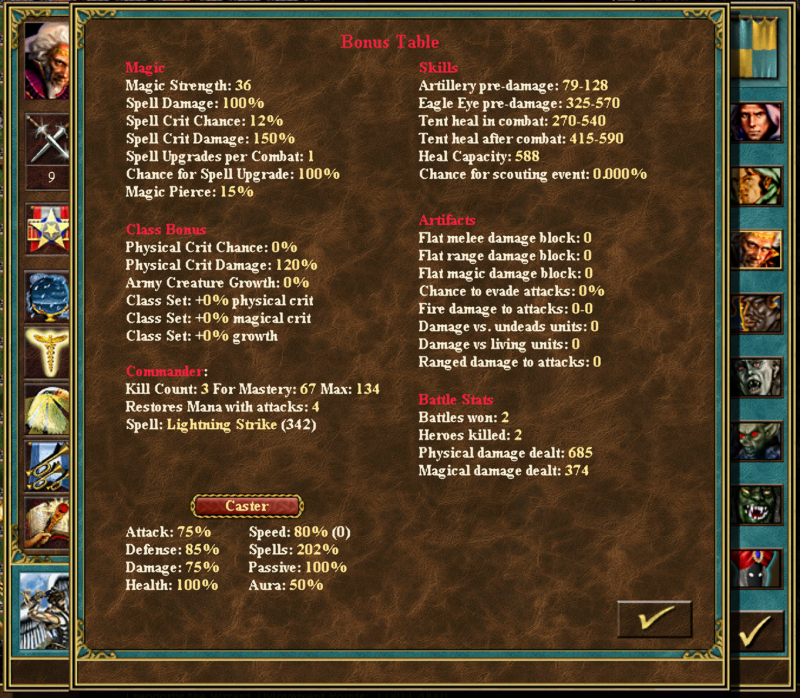 This is top mod keep it up man!