This article I'd like to share my thoughts on Weapon tinkering for my Game, Dereliction. What it is, and why I feel its needed, to help paint a picture of what to expect to see

Hello everyone, All is well, as well as things ever are. Now that the core gameplay loop is functional (I say that loosely, :P the player can essentailly start a level, find the exit of the level, and continue on to the next one) I am now working on the meat of the game, the why, if you will.

A lot of what I say does exist, but a lot of what im saying will change, be improved. Ultimately, a fair amount of what Im about to say is what I will want this to be. 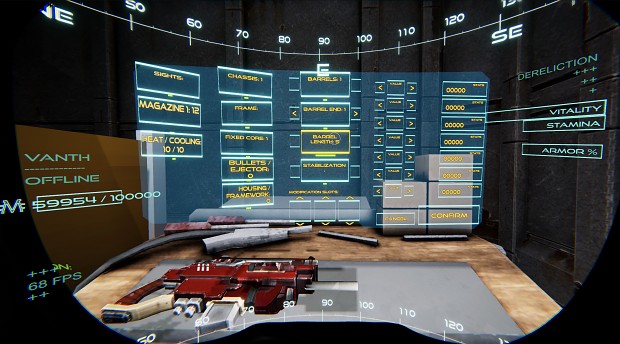 So, when the player starts, the are given two weapon slots, so lets say one in hand, and one in holster.

The weapon base has stats, as well as a +1 modifier, Assuming this is the first one the player will find. I see the player choosing their select weapon with the stats that are most agreeable to them, as we’ll as its starting color palette.

It has its max amount of damage it can be dealt and still work, essentially its health. And the player will be able to repair this weapon. If the damage exceeds the max allowed damage, while firing, the gun will explode, dealing damage to the player as well as everything in the surrounding area. This is important.

As the player travels through their current created level, the may come across a work bench that the can place their weapon, and start to repair or modify it. Modifying is where it gets interesting. The players currency, and ammo, is the scrap metal that is created, collected, as the player plays the level, and as its collected, its weight starts to slow the player down. So its advisable to shoot (obviously) and keep them moving at a reasonable level. But also, to stockpile an amount to the work bench.

Once there, they can start upgrading / downgrading any of the articulation points, from a level of 0 to 10. For example, reenforcing the chassis of the weapon lowers the damage the weapon receives, but increases its weight. 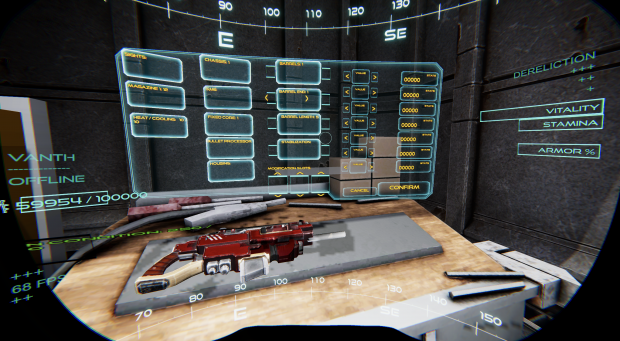 Upgrading the firing mechanism will increase fire rate, but also increase the heat the weapon produces.

Upgrading the barrels length improves its accuracy over range, increases its weight and lowers its cooling speed.

Since the raw metals are being converted by the suit into these slag bullets, the bullet style is also changed through the weapon. For example, a spread pellet shot will lower the firing rate, and use more metal per shot, increase heat produced by the shot, but the bullet will split, firing a spread of shrapnel.

Also keep in mind, this is on a 10 level scale, so a max level pellet will send out a tonne of splinters per shot.

So the player has quite a bit of control over what they can create, just by modifying their base starting weapon.

Now, the downside to creating a very powerful weapon will be its metal consumption, and heat build up, which ties to the damage it will do on itself when fired hot. So yes, its very possible to create some mind bogglingly powerful weapons, but they’re not going to help much if they can be fired without exploding instantly. Exploded weapons cannot be scrapped back into raw metal either, but can be used as a last resort tactic if the player is surrounded, and could use a good explosion right now.

Buuuut, once the player has spend their collected earnings, created their ultimate weapon and feels like they finally have some say in the matter of wanting to exist in this world, they will always be temped by other weapon templates (base frames) with different, better starting stats, including modifications, and modification slots.

Modification slots, for lack of a better word, would be like the gem slots in RPG games. The player would find these modifications, either loose, or in other base weapons. This is where the two weapon slots come into effect. The player can carry a low level found weapon, pry out its useful Modifications, and install it into their existing gun.

Or, the player may find a far better base frame, and that will not start its journey to be the players primary weapon.

An example modification would be piercing bullets, that would pass through a % chance of enemies.

Another would be highly bouncy bullets,

And, given the frame can have up to 3 modification slots on the weapon, sticking, exploding, electric bullets all in one.

Im finding this article difficult to write, solely because at this point there are no limitations to the modifications that can be added, and this is already getting too wordy for my taste. So I will leave it at that.

Thank you for reading all of that, and the best way I can ever explain is to show, not tell, so look forward to seeing a whole lot more! I am writing remotely, but ill be back to work work soon.