Check out the latest BWL Video Update for a little fresh info regarding the project. Also, thanks to EDOC_32 for all the continued work in trying to fix up and debug our code. And let us not forget the images he passed along.

This is a news post I have been debating for a while. Frankly, I have been really hesitant to discuss Cat-Life outside of individual discussions. I worry about too many people being brought into the discussion only to have something happen to change our plans... this happened last year and pushed everything [all projects not just Cat-Life] back by a year.

But it's been too long. I've been too silent. And I think it's all worth saying.

First up... check out the second episode of Video Update. It includes some of our plans and the like, but it also covers the big Cat-Life news. It's basically two segments with the second half of the episode dedicated to Cat-Life. Starts at about 12:02 in the video.

Now, to get the hard one out of the way first. Yes, we plan to release by the end of the year or at the very latest in January. I cannot emphasize enough the fact that this release is likely only an "initial release" and may not be complete. But I feel that we NEED to release some portion of the mod for the people that have been waiting for ten long years.

Second, there are some new goodies to talk about that I have been sitting on since some time last December.

EDOC_32 approached me ages ago about helping fix some of our code. He would debug it some and add some new entities and tweaks.

And so he has. There have been some issues getting a playable demonstration of everything, but he's still trying to fix that. Nevertheless, I have had a chance to at least play with the bonus weapons and they can be fun.

1. So... some of the changes are...
Grunts no longer shoot or throw grenades at the cat.
The bite no longer hangs and causes a violent eating - super heal loop.
Larger foes are even less likely to pay attention to the cat when more dangerous foes are present.
Dogs have better AI and... well... 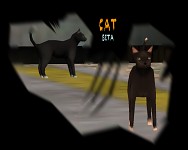 2. Some of the added weapons and monster tweaks are...
Dogs have improved AI and have four body choices allowing for up to 4 breeds.
Cats, zombie cats, etc have some new temp models and minor tweaks.
The Chainsaw is working
The kitty night vision is working [not to be confused with the natural dark vision]
The Acid Hairball is working
The homing mouse toy bomb is working
The Amp Suit module is working but a bit glitchy
The Toast Module is semi-working and very buggy. 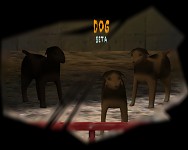 And there are other additions I don't remember at the moment.

As stated before, EDOC is still trying to fix some of this stuff. If you would like to help debug the code or want to add some more changes, let us know and I'll put you in contact with EDOC.

Additionally, we really do need models. Certainly, we need custom models for the weapons and monsters we've added. But I would also really like to see a fresh art style used on everything from the original HL. New versions of the grunts, barneys, scis, etc. And let us not forget the boss monster. We need some 3D artist talent on these fronts and any help is appreciated.

I'm glad this isn't dead! Once this mod is released I'll probably put it in my Half-Life mod classics, I have a strange feeling that this will be one of those good mods. I hope you can find the needed. The only help I could provide is writing, sorry if that doesn't help too much.

i need fix some errors and bugs and ready! :D.
thank you The_Wildcat for give me credits :).

Damn dude, you still haven't made a release? Ah well, at least it's not dead.

Don't get your hopes up and enjoy whatever they release.