The fourth article in a series of previews showing what new and improved content you will be able to experience in A Clash of Kings 2.0.

As previously talked about, 2.0 will see a great amount of lore, locations and facts from The World of Ice and Fire introduced.

One of the great new things is the revelation that there's more cities in Essos than previously known. This should make the continent of Essos a lot more fun to play around on. I've also overhauled the Essos part of the map - more mountains, forests, passes etc. 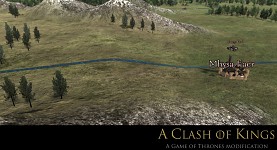 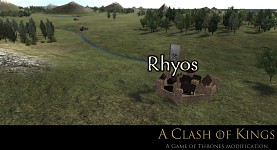 All to make Essos more appealing, and less bland. The Essos factions have also received a diplomatic overhaul. Some cities, like Pentos, will not go to war but the Three Daughters (Myr, Tyrosh and Lys) will go to war against each other frequently and without warning. 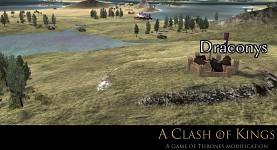 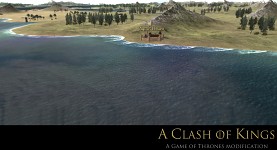 I've also emphasized making some features less tedious. The modification is designed to be super frustrating, but only through difficulty, not poor design. So minor annoyances have been tweaked - as an example, you no longer need to travel all over the world looking for Velvet if you want to move your court to a new location.

And as previously discussed, I'm continuing the graphical overhaul with even more props to make the world come alive. 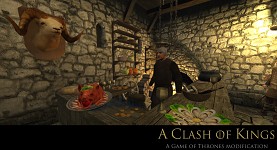 Amazing News!! Can't wait for the release and keep up the awesome work!!

Yay, sounds great! :D Cant wait to play the new version. It shall soon be time for me to return to Westeros!

Looking forward to next news.

I am really enjoying Clash of Kings but there are just a few things I wish to see in it too.

1)
Family members of House Stark.
I havent fully completed the quests of Night Watch because I got a bug there on my other account, so I do not know if they will be there. But I really would like to see Catelyn Stark comming on a feast, Arya stark, Sansa Stark etcetera. If you could bring them in as real personages, that would be really cool.

2)
If you could, maybe have a look at what every town sells, so that the economics would be a bit more realistic.

3)
Winterfell is a minor castle, but in GoT its the 'Home' of Robb and stuff. If you could, I would prefer it to be a town instead of a castle. Same with the Eyrie.

Well, I know ur really bussy and already did a great job. But for me it would be great if this could be realised. With a special regard to the House Stark Family. I am really missing them in the game :(

Arya is in the game, you can see her at the remains of Harrentown.

This is just my opinion but 1) and 3) would be way to much lore breaking. To see Sansa at King's Landing would be nice but Arya is at the remains of Harrentown were she should be and Catlyn should be with Robb, but seeing as she did not fight any battles it would be lore breaking to have her in Robb's army so, where to put her in the game?

wouldn't be too far on 3) with winterfell, as winterfell has wintertown which is a market town, i'm sure i've seen catelyn in riverun which is spot on, would be good to have a mission to help sansa escape kings landing etc..

Yes, winterfell has the wintertown, but as the name should make clear, it is only used in winter. In the time the mod is set it is not winter, therefore Cozur has not made it a town.

You are right about Winterfell,İf Winterfell was a town,it would be more realistic and more appealing for traveling in North.But I don't think Eyrie is a town-like place

In accordance to your comment on Winterfell and the Eyrie, they are not towns or cities - they are castles and strong ones at that. Winterfell is not really a town and only in Winter is it heavily populated (the nearby villagers moving to Wintertown to be near the stockpiles of food Winterfell has). In the case of the Eyrie, it can barely hold more than a few hundred people maximum at any given time and can only sustain a very small population due to food demands etc. The towns that are already in the game are canon and there is no need to edit existing castles into towns in the listed cases.

Are these previews available to download? Or are these just articles on you updating us on the progress? Either way great job so far.

Also maybe a special recruitable unit from crackclaw point since the clawmen are the crownlands' equivalent to the skagosi?

Also ghaston grey, and it has a cool little backstory maybe prison guards or escaped prisoners being a one time recruitable unit Awoiaf.westeros.org

Hi, when I conquered Kings Landing and made it my new center, i didnt find the chest, where i had my money and stuff...

It would be great if you could implement sounds and music from TV series.

Can you please answer one or all of these questions, how many more previews can we expect, will the tullys return, and what is the release date of 2.0?

Will there be unique troops for the Essos factions once again in 2.0? Not complaining just curious I enjoyed each having its own unique twist instead of all being mercenaries.

Love the mod, and appreciate the hard work.

Its awsome! A couple of things:

2. The lords loyalty system , I mean it's kinda weird to watch a wildling or a Dothraki become a westerosi Lord.

Hey cozur I'm sorry if this question has been answered before but I was wondering in future updates would it be possible to make your own Valyrian sword? I think it would be a really cool addition to the game. Thanks, keep up the good work.

love the work you really are making an amazing game. :)