The second article in a series of previews showing what new and improved content you will be able to experience in A Clash of Kings 2.0.

The above is how the last preview started, and I stand by it. 2.0 has seen so many improvements that I wanted to implement ages ago, but simply didn't have the time to do, or the know-how.

The coming previews will delve into some of the more exciting features, but for now I'll showcase something I know A LOT of people have been wanting - unrestricted sea travel.

Basically, both the player and all the NPC's will now be able to sail all over the ocean. However, you cannot make anchorage anywhere you please, and still need to find a port. The ports are named and visible on the map, as shown below. 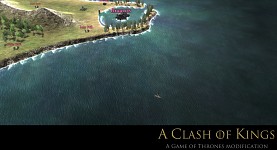 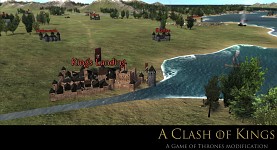 There's currently 65 different ports in-game, but depending on testing, I might add some more - really depends on how the AI handles it.

To make ports a bit more exciting, I've added a small feature to them. You can click them and a menu will pop up that give you a bit of lore information. Like shown here: 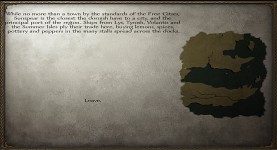 However, some ports might also allow you to hire disgruntled deserters looking to get the hell out of King's Landing before all that wildfire explodes or simply just wanting to take hire as sellswords. 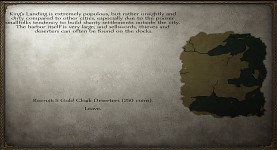 What you see there is also a tiny preview of some of the new "artwork" in 2.0. I've basically strived to make everything uniform, and every single piece of background art has been replaced.

Another big thing for 2.0 is the updated textures and meshes. A feature that's been long sought after is a low-res version of the mod, and yes, 2.0 will be released as two different versions, completely identical except for the texture resolution. This should allow those of you with an older machine to still run the modification.

However, for those who really enjoy eye-candy and the like, I've added hundreds of new props and replaced almost all the old low-quality ones. This is part of the ongoing effort to make the game look as pretty as possible, while also preparing for Bannerlord. The new meshes and textures where bought with a part of the donations I've received during this last year, and will enhance both the graphics and the scenes. 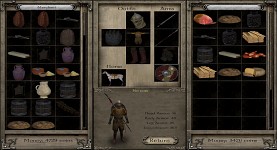 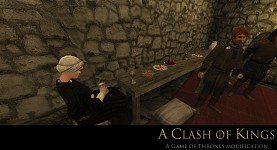 If you want to support the creation of this modification, and help us prepare for Bannerlord, then click the button below.

The changelog there is updated regularly with whatever features/fixes/tweaks/bugs I've crossed off the list.

Ho..ly..****. This is going to be awesome. I'm pretty sure you guys will be getting mod of the year.

Also glad you guys frequently keep us updated, unlike L'Aigle...heh...

Looks great. Really waiting for this low-res version of the mod :P

Honestly, i check every day to see if the mod has been updated. Can't wait for 2.0

I voted for this as mod of the year, He deserves a win after all the work and effort he has put into this, this could be a stand alone expansion and i do believe all of us would pay 15 bucks for it, cozur u should pitch the devs on that idea.

I was thinking why he hasn't or HBO hasn't ;), it's such a great mix of genres and this mod is incredibly well done.

can you release it this month or do you need more time,

cant wait for it to be released

Cozur, do you plan to add some limited river travel on some of the bigger rivers?
Cruising down the rhoyne or the mander would be amazing.

Yes would be totally amazing!