Latest mod version: 1.1.2 - Please use and download this version

ZRift is a mod aiming to attempt to at least partially recreate Chasm: The Rift inside GZDoom engine, as improved, re-imagined version. This is not intended to be 100% faithful port. Co-Creator of this mod, Pandut is working on a faithful version. (TBD)

Originally posted by DavidN on 5 July 2019 at 22:19
Source article can be found on Zdoom.org Spotlight page

“Chasm: The Rift” is an oddly tautological name for a game. It’s a bit like if our favourite seminal first-person shooter had been called “Doom: The Doom”. Released during the last gasp of the DOS game era in 1997, it was a first-person shooter by the Ukranian development company Action Forms that saw the player warping through time periods in an attempt to stop an invasion by the alien Timestrikers.

Technologically, the game sat in a weird place as a stepchild between the Wolfenstein 3D and Quake engines. Its custom-built 3D engine supported weather effects, appropriately wobbly water, could move three-dimensional walls and doors around, avoided sprites in favour of rendering everything in those polygon things that were all the rage in the mid-90s, and yet the levels themselves stayed doggedly and uninterestingly flat throughout. It was like what Doom might have been in a different reality, if Carmack and company had gone with blazing their trail of 3D technology in a slightly different order. Fortunately, Pandut and HAL9000 arrived in to fuse the timelines back together in mid-2018, and reunified the gameplay of Chasm with the engine of GZDoom.

And it all works very impressively - in the past I haven’t really got on with mods that use 3D models heavily within a Doom environment, but the amount of attention to detail in this WAD makes them feel like they fit perfectly because the entire experience is like playing a completely different game. From the great-looking new title screen and menu onwards, every detail of the game has been reworked to give it an authentic Chasm feel (apart from the dodgy mouselook support, fortunately) - everything in the game has had its appearance and sound meticulously recreated. The replacement of the environmental sounds also contribute greatly to making things have a different atmosphere - the familiar space-age noises of the Doom doors and platforms are replaced by the gritty clanks and rumbles of Chasm.

The models for items and enemies are translated directly from the ones in Chasm, dragged painstakingly through a modelling toolchain with reams of MODELDEF files defining the enemies’ movement and animation accurately from the original game. However, ZRift doesn’t content itself with being just a straight clone - many of the enemies from Chasm only had melee attacks, which the wad authors understandably decided wouldn’t work very well when dropped into the more vertical-heavy levels designed for Doom. So they built on top of what was already there, creating new animations for attacks like the Viking enemies hurling their shields at you or the shambling mummies that can now cough deadly mist in your direction. All of these, plus the new weapon the Plasma Thrower, fit so well into the game that a newcomer wouldn’t notice they were additions at all. 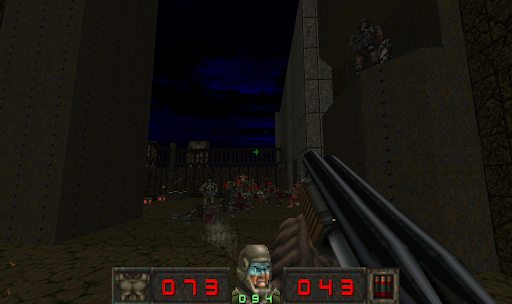 The other issue the authors had to get around was that Chasm has a far larger library of enemies than Doom - twenty-four of them according to the game’s wiki! To get them all into this conversion, straight replacements of monsters wouldn’t be enough. So they came up with a way for the mod to perform some clever tricks with Decorate and ZScript to make sure all of them got some screen time. For some classes of similar Chasm enemies, it’s enough to replace Doom monsters with a spawner that will randomly replace them with one of the various rough equivalents - a Hell Knight, for example, could randomly be replaced with either a Lion or an Orc. But for others, a bit of ZScript is used to substitute the entire population of imps or pinkies on a map with a single chosen species from Chasm, effectively giving the map a random theme for its enemies each time it’s loaded and making sure the game doesn’t throw its entire menagerie at you at the same time.

Rather than copy the weapons directly over, the authors have recreated them all to give them an overhaul with a slightly more Doom-flavoured twist visually, complete with the gloves that we’re all used to seeing hovering in front of our eyes. They’ve managed to give a fantastic punch to them, with a lot of weight behind the staples the double-barrelled shotgun and the Vulcan chaingun in particular - but it’s the way that even the much more unconventional Chasm guns have been translated that really catches my attention. One of the most fun is the sort of razor-sharp deadly frisbees - you can collect a stack of these from fallen jester zombie lizards, throw them around wildly, watch them ping off walls and embed themselves into enemies and you can even pick them up to be thrown again afterwards. Comfortingly, the frisbees pass harmlessly through the originating player, unlike the comparable Ripper from Unreal Tournament where I invariably managed to slice my own head clean off within ten seconds of laying my hands on it. 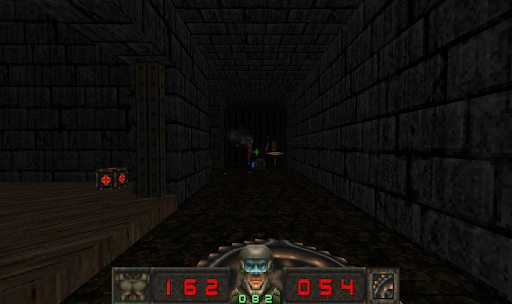 With all this in mind, it’s a bit of a shame that ZRift doesn’t provide any actual maps that are made for this new weapon and monster set - the new content could honestly form the basis for a complete TC of its own. Several suggestions for mapsets are provided in the release topic, though, and I elected to play through it with Erik Alm’s Scythe2 because of the note that it was laid out similarly to the original Chasm with several changing level themes. I hadn’t played through this WAD before, and having ZRift on top of it felt completely natural. Health is both lost and gained a lot more quickly in ZRift compared to the original Doom - health packs give you a greater boost but attacks from even the weakest enemies can sometimes be devastating, keeping you constantly on your toes.

If I have one gripe with the content of the mod it’s a small issue with the HUD - which, as you’d expect from a project of this quality, has been completely overhauled to resemble the Chasm status bar when it’s visible. In fullscreen mode, though, it switches to a nice hybrid between the two games - Doomguy’s twitchy face is stuffed into the helmet from the Chasm status bar and is flanked by a few counters. My complaint is that the arrangement of the counters relegates the crucial health display to a small font in the middle of the screen, with much more prominence given to armour and ammunition - it can be difficult to remember which counter you’re meant to be looking at when judging a retreat from a horde of time-travelling viking zombies. 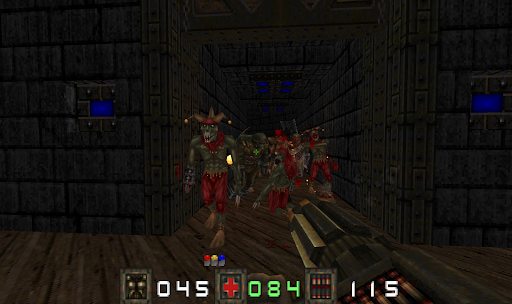 That aside, this really is a great example of using ZDoom’s capabilities - especially its support for 3D models - to create a game that feels very different from any of the standard Doom WADs. At the time of writing, it’s planned to be made officially available as “ZRift Legacy”, with the aim of splitting it into two different packs in the future - one called Classic with the aim of being as vanilla Chasm-themed as possible, and the other called Beyond which will continue to build more on top of the base game.

Can't the original Chasm weapon sounds be activated somehow? The new ones are too freaking loud.

Love this mod. Could you make it possible to turn off Chasm music in a future update? Or make it a separate add-on like the 1.0a version. I like Chasm music, but it's sad that can't able to listen to custom level music.

Thanks for the feedback.
We will try to improve on this issue.

I'm currently playing through the final episode. Will the levels be reimagined as in larger and more expansive with cool architecture to look at?

There will be 2 type of levels
1. Slightly tweaked vanilla levels (they are mostly done)
2. Overhauled/Remastered levels (Planned after vanilla levels release)

Overhauled/Remastered as in larger and more expansive with cool architecture like I asked?

Yes, But first we need to finish the Vanilla levels and map assets. You can check the sneak preview of some of remastered assets here:


There is still a lot of work to do. This is just a preview of the assets quality we are aiming for.