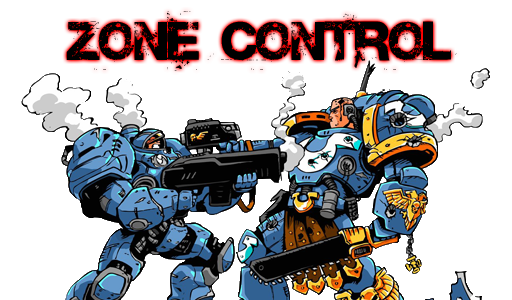 If you ever played Starcraft or Warcraft III, you have probably played Starcraft Zone Control. The purpose is quite simple, each player begins with a bunker, which repeatedly spawns marines (1 marine every 2 sec), who can be controlled and sent to your enemies. But, the main attractive thing is in the upgrades you can purchase for your troops, and above all, in which order you buy them ! You can build more bunker and take more control over the map, to create even more marines and eradicate your enemies. The original map looked like a chessboard (see here)So, for the Dow2 version, I think I’ll use the same gameplay, but with some modifications. For example, you can build your bunkers where you want, not on a chessboard, you can play by teams, FFA… For the future releases, we could add special events, random alliance, orbital bombardment…

/marine, losing some give 1

/marine
_ destroying a bunker give 50

_ construction of a bunker for 100

_ troops invulnerability for 5 sec for 100

IV-Miscellaneous (for later) :
_ choice of the marine’s armor at the beginning (Shuma’s models etc...)_ choice of game mod_ original maps (king of the hill, labyrinth…)
_ heroes

Here is a first screenshot, where you can see the basic bunker, the five first upgrades (health, damage, energy, shield, range and regeneration (not shown here)), the marine's production list (1 every 2 sec), and the ability to build another bunker : 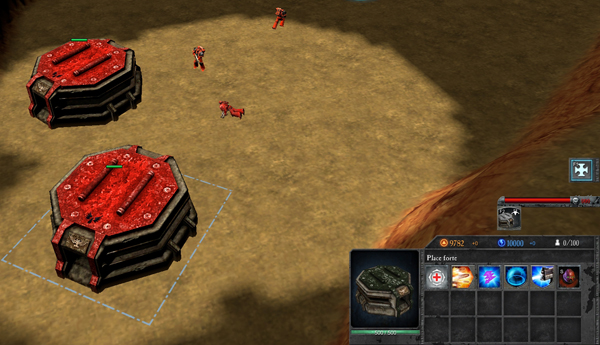 Besides, I managed to make the rally point common to all bunkers, but I need to find how force the move to attack-move... Anyway, I think this mod can be soon released, at least for the basic release...

EDIT : I think I'll soon need alpha testers, because the AI is so stupid it can't even produce marines or upgrades... And if some mapper like this mod, I won't refuse any help ! I've thought about several maps :
* Financial Crisis : you only have a fixed amount of money, so you can't upgrade everything, and you marines don't give money when they die... Be a strategist !
* David vs. Goliath : one player is Goliath, with more income, more money at the begining and more bunkers, the others are Davids, with basic marines and bunkers... Difficult to balance, but can be interesting to play.
* King of the Hill : very simple, to win you have to hold a central point for a while, this need to be as well an offender as a defender !
* Trench survival : a coop map, players must defend the line at all cost, against infinite troops... Work together !
* Dying Planet : basic fight, but the whole planet is collapsing, with rokks falls, earthquakes... Epic battle !
* Space Hulk : basic fight, but you can activate several doors and prepare some traps for your ennemies... Beware !

Thanks for voting and helping Zone Control Mod on it's quest to become the 2021 Mod of the Year. You are now in with a chance to score some free games from our #modlove collection. Help this mod secure more votes by embedding the widget (or link) we have included below on your favorite sites.

Here is the first release !

It contains the main upgrades, and a good playable map, Dying Planet (with random rokks falls).
Note that this is an alpha version, so it's not really balanced, all the figures are made with instinct, and are not exactly the same as those wrote in the summary (no red ressource for example...)
You should try it with friends, because the AI is too stupid to create troops and play correctly...

I remember you the purpose of this gamemod :
You begin with a single bunker, which can produce marines (50 max) for free and research a lot of upgrades, which are paid with requisition, earned by killing marines... You can also build more bunkers, and cast some abilities (temporary invincibility...), and to win, you have to annihilate your ennemies.
So all the gameplay is in your buildorder : will you first improve the health, the damage, the cooldown... ?

This is a very first release, which can be played against the AI (which is not interesting) and most probably against other players (I couldn't try it...

did you drop this?

Actually, that was my intention, but it is very difficult to do ! I think I can make it with a lot of work, with the dreadnought berserk ability, and while your marines would be uncontrollable, you could make terminators, dreadnought, or maybe one hero, which would be controllable... But I didn't implemented this in the first release, it was too long and complicated to do, because it implies to have player abilities to give orders to your troops (I thought about some kind of map ping ability, but here too, it's complicated...).

this looks good dude, i have one suggestion though, you dont have to use it: you could make the marines attack the enemy uncontrollably, so they spawn and charge straight away. then you have to rely on upgrades an maybe some special infantry?