We'd like to finally share more improvements to the game's balance that you all have been asking for, and some that we felt was necessary!

It's been a while since our last beta update which was focused on melee weapon improvements, balancing, and other tweaks. We've heard a lot of great feedback from all of you and we are finally ready to share more improvements to the game's balance that you all have been asking for, and some that we felt was necessary! We've got a lot to talk about regarding today's changes, therefore stick with us until the end of this announcement and be sure to share your thoughts in the comment section down below! Keep in mind that some of these features are still work-in-progress, and everything is still subject to change before release.

After every map change, the first round will be a warm-up round which works in the same way as the "test mode". Players will be able to walk freely around the map between 30-60 seconds while everyone waits for the rest of the players to connect. This can be adjusted via CVAR by the server administrators to meet their players' preference. 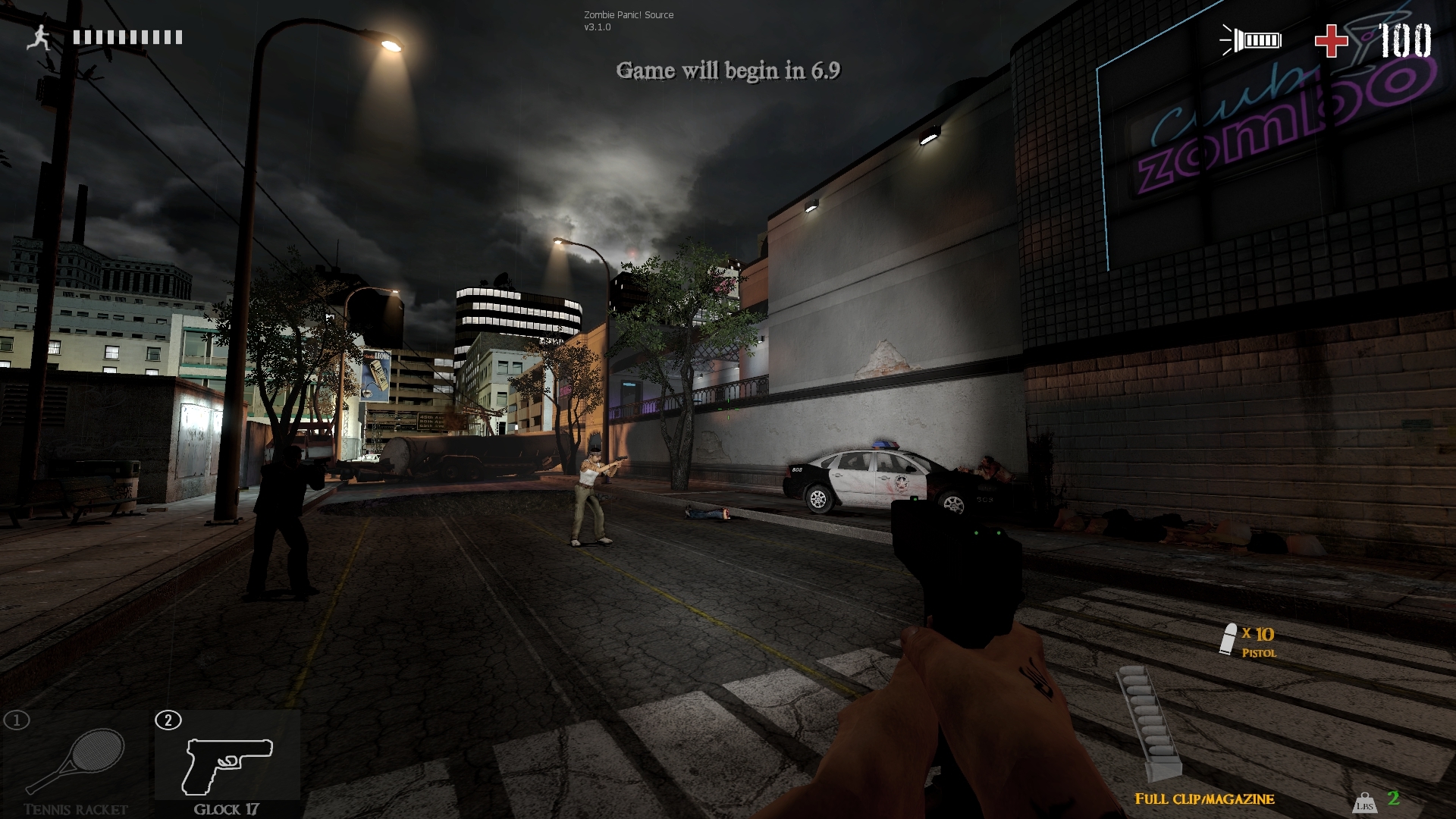 We hope this will help address the issue of the first round being heavily in favor of the Zombie team due to players taking a little longer to connect and joining the round late.

We've been working on designing an improved score system that rewards players for most of the actions that they can perform. Gaining score is still primarily focused around killing or doing damage; that's because it is the most important action to helping you win on either team. However, now other actions such as healing a Survivor teammate or completing certain objectives will give you more points than you'll get from a kill. This will encourage players to help their teammates more or complete objectives instead of camping for kills in objective maps. Our intention is to encourage players to perform these actions more often by rewarding more points for completing those actions.

One necessary change with this new system was that the amount of points rewarded needed to be inflated to allow us to implement more diverse rewards, instead of everything rewarding between 1-10 points. The point values will be much higher than you're used to, but this does not diminish their value. Every action that rewards points will be balanced depending on things like their importance, difficulty, and frequency at which they can be performed. We will not be discussing the exact values we have planned at the moment, because these will be adjusted before release. Although, we will say that it would be possible to get thousands of points within one round with the new design.

Certain actions such as placing barricade boards and sharing weapons or ammo have been excluded from rewarding points. Rewarding these types of actions would result in things like Survivors using barricades boards on a wall where it's useless, or constantly sharing items back and forth unnecessarily, all in order to farm the most points. We feel that it was necessary to restrict those actions from rewarding points in order not to encourage that type of behavior.

Here are some of the actions that will reward players with points; 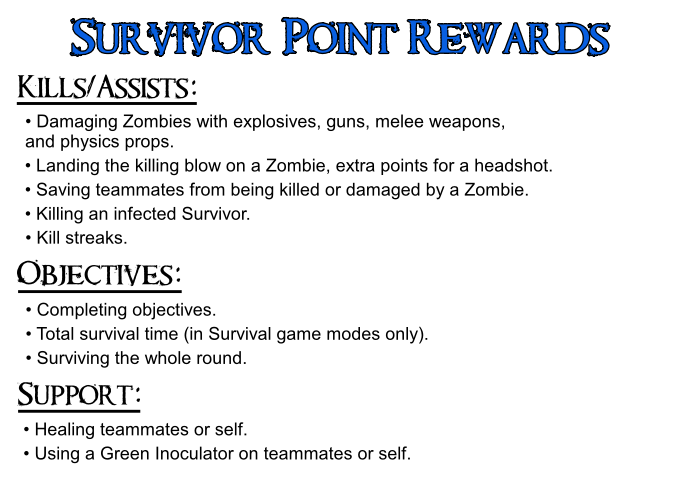 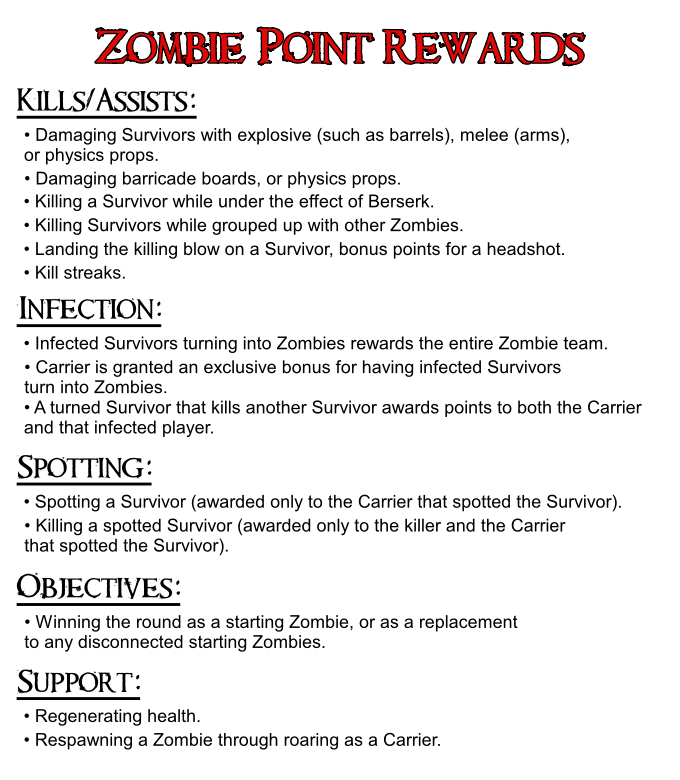 Currently we are in the process of implementing the new design, then we will move into testing and balancing. It's important to remember that this is still a work-in-progress, and it will be adjusted as we test the new system to see how it functions. With all of that in mind, we appreciate any feedback you have regarding this new system!

We were aware that it has been a little difficult to play as a Survivor in situations where your arsenal wasn't very useful against a horde of Zombies. We did minor adjustments to their damage hoping to fix this small issue. We had lots of fun during our internal playtesting in the past weeks and we hope you all feel the same with these changes!

This update also includes small tweaks to all melee weapons' attack range, making them act according to their model measurement. For example: a hammer will have a small range compared to a golf club or a machete. With minor changes such as these, we hope to maintain fair and balanced gameplay.

Survivors could become extremely slow after depleting their stamina when carrying the default spawn loadout (a pistol, 10 pistol ammo, and a melee weapon). So slow that it would give you no chance to run away and survive.

Therefore we've decided to make some adjustments to Survivor fatigue, so that they don't become extremely slow when they're not carrying much. The intention is to make it so that a Survivor can run away from Zombies to stay alive for a while longer, but when they run out of stamina they will eventually be caught.

These adjustments are still subject to change after more testing, but basically, how it currently functions is that you'll run about 5 velocity slower than a normal Zombie when you've depleted all of your stamina and you're carrying the default spawn loadout. Once you are low on stamina, the Zombie will eventually catch back up to you if you can't panic or defend yourself in some way. This will give Survivors a chance to run away and hide, or find something to defend themselves with. But in the end they will be eaten if they cannot find a way to save themselves.

Have you ever found yourself completely defenseless when having no weapons, perhaps a Zombie blocking the doorway? While unarmed, Survivors can now brawl with Zombies using their fists. However, fists deal an extremely low amount of damage and is only intended for last resort purposes.

Survivors also now have new shove animations when pushing physics props. This will be helpful in indicating to Survivors if they're actually moving something.

These changes were made because Zombies could be hard to see in very dark areas when they were coming within a dangerous distance of a Survivor, which made dark areas unfair for Survivors. Now Zombies should be easily seen when within a pistols' effective range.

Besides fixing some bugs we found with the inventory, we've decreased the inventory sorting cooldown by 0.25 seconds to make interactions faster and less tedious.

How Survivors obtain barricade planks from a pile of barricades has also had minor changes. Rather than picking up the entire stack of barricades, Survivors will be able to take a single plank at a time.

We're also considering adjusting the weight of items to more properly balance them in compliment to the fatigue adjustments. But this has not been completed yet, so we cannot speak about the specifics of this change. 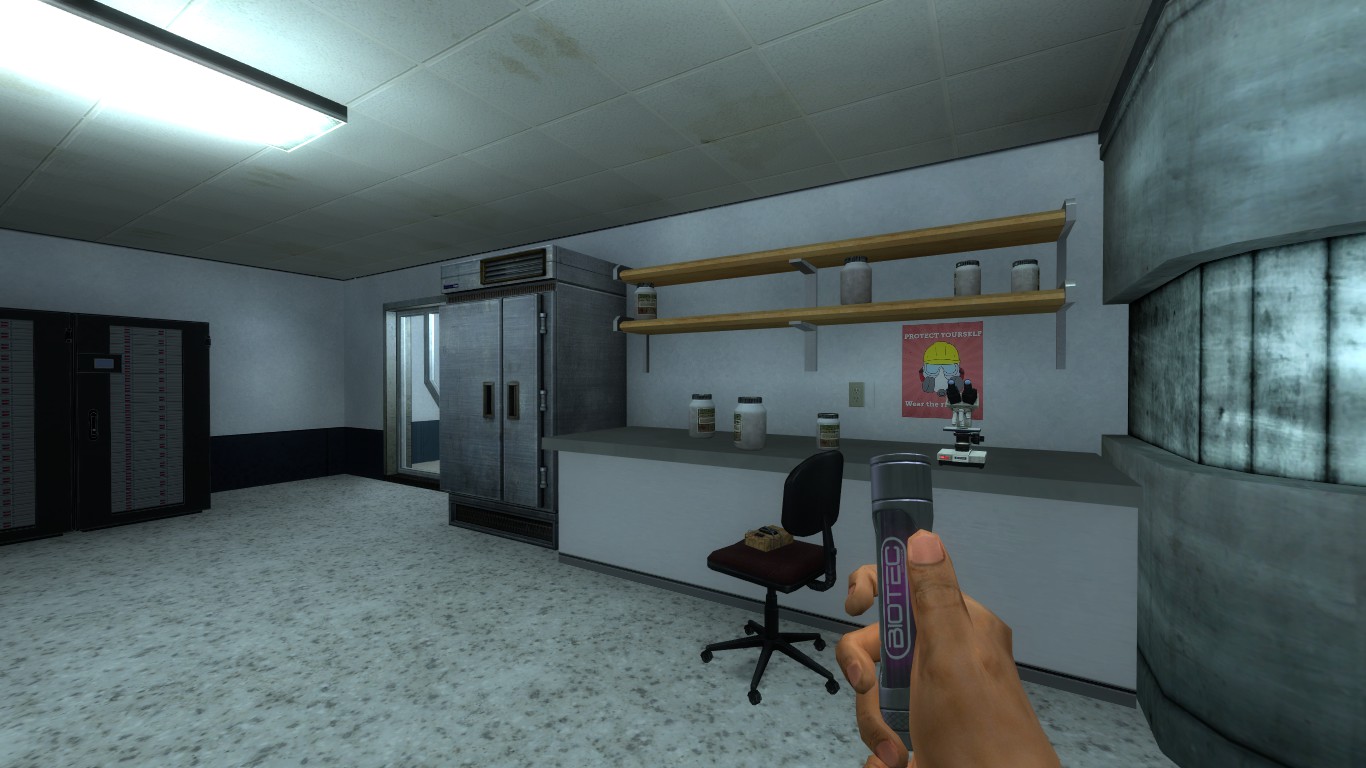 The Biotec anti-virus has been given a new model;

The effect of the Green Inoculator has been changed so that it heals over time for a small amount, temporarily increases resistance to infection, and will temporarily pause infection state and delay turning into a Zombie.

The Panic effect was removed from the Green Inoculator because we felt that it wasn't very useful except in very specific situations. We think that such a mechanic would be better suited for a different item we're considering adding in the future, with some adjustments to the effect.

We've made a very minor change to Zombie damage where some body areas would do slightly less damage than others, preventing Zombies from killing unarmored Survivors in the usual four swipes. It should work as intended now.

The rate at which feed-o-meter regenerates has been increased so that it takes about 40 seconds to regenerate the whole bar. This change was made because Zombies could not be as useful to the team in the time it took them to regenerate their feed-o-meter back. Now they will be able to use their abilities more often, which should make playing Zombie more enjoyable.

We've made jumping a bit more penalizing to Zombies who spam it continuously. Each jump will increase your fatigue (reduce your velocity) by 10, stacking up to a maximum of 80, with the minimum velocity you can be reduced to being 80. When you stop jumping you will gradually, but quickly, regain your speed. This is to discourage Zombies from jumping too much, and to encourage them to use their lunge more often.

We realized we overlooked an important factor in random infection replacing starting Zombies: the fact that it would only replace one single starting Zombie. It's now fixed so that multiple Survivors can be randomly infected to meet the required number of starting Zombies depending on the current player count. This will maintain proper balance when at larger player counts.

Cinema is undergoing some major changes to improve balance and design. We've got some previews for you, but remember that these are still work-in-progress.

We're still unsure of when we will release the next beta patch, but it is getting closer and closer. The plan is to get the new scoring system implemented, perform some internal testing, and address any remaining major balance issues, then beta patch 3 should be ready to be released. However, things don't always go as we anticipate.

Issues regarding level design will take us a longer time to finish, and therefore not all level related issues will be addressed in the next patch. We will make these level changes over a longer period - after a process of testing, designing, and repeating until things are right.

After the release of beta patch 3, we'll be focusing on preparing v3.1 for public release. The major reprogramming has been finished, and most of what is holding v3.1 back from release is testing and balancing. Although, it's important to remember that there's the possibility that other major issues could pop up that could delay release longer. We have no estimated or planned release date for v3.1 yet, but we will say that it's just about ready.

Your feedback is important!

As always, we appreciate all feedback you have for us! Thanks to the community's input, the 3.1 beta has been shaped into a positive direction, heading towards an enjoyable, balanced environment. We will also be scheduling weekly playtime events to garner interest in 3.1 and to provide an opportunity to try the latest build. We look forward to playing with you!

I'm pretty impressed. I haven't touched zps is closer to 10 years but if be willing to pick it up again and join in on the fun.