Follow Sarah Kerrigan on her new journey as she and her brood wreck havoc on the Warcraft III timeline. All Zerg from StarCraft: Brood War are available. Their stats have been adjusted in order to play nice against the War3 races, but their functionality remains intact.

How to Player Multiplayer Games

You can play as Zerg in any standard melee maps online with your friends, or against the computer.

Just set your race to Night Elf, and your handicap to 90%.

And you're ready to command the swarm! 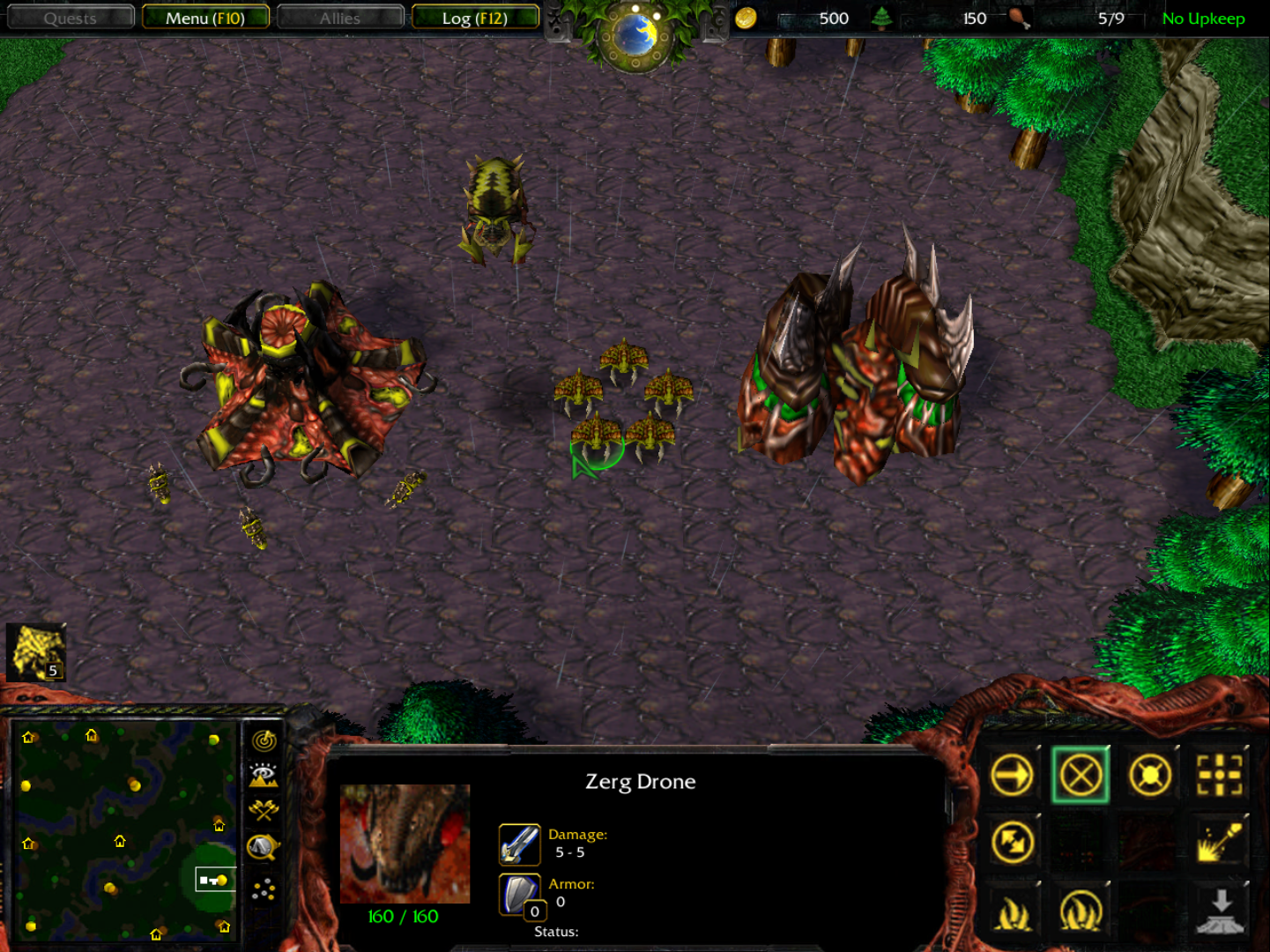 This will work on any map that spawns standard melee starting units. So there's no need to to create extra maps, the ones that come with War3 will work out of the box!

Of course, you can only play with people that are using the same version of this mod.

Note that computer players are not currently able to play as Zerg.

Also, maps that run unusual triggers at the start may prevent creep (and therefor Larvae) from spawning properly. If this happens, modify it or pick a more normal map.

Eurobattle.net is probably the easiest way to play online. It supports version 1.28 of War3.

This project began by combining the efforts two ill-fated StarCraft-themed projects in an effort to fully realize the Zerg in Warcraft III.

Warcraft vs Starcraft was used a base for core Zerg functionality, such as Creep, and how units are produced via Larva, as well as for its UI textures.

Assets were then imported from Project Revolution, because I prefer Brood War over StarCraft II. They weren't 100% complete, and I had to add sounds to them, but they look the part well enough.

Afterwards I went to work on getting all Zerg units and their abilities from StarCraft: Brood War faithfully represented in War3.

Many great assets from the War3 community were also used. For a full list of credits, check out the Hive Workshop thread.

This update brings the last chapter of the Zerg Campaign.

A whole year ago, the first public alpha of this project was released on Hive Workshop. It's come a very long way, since then, from a borderline-unplayable mess to something that I can say I'm quite proud of. 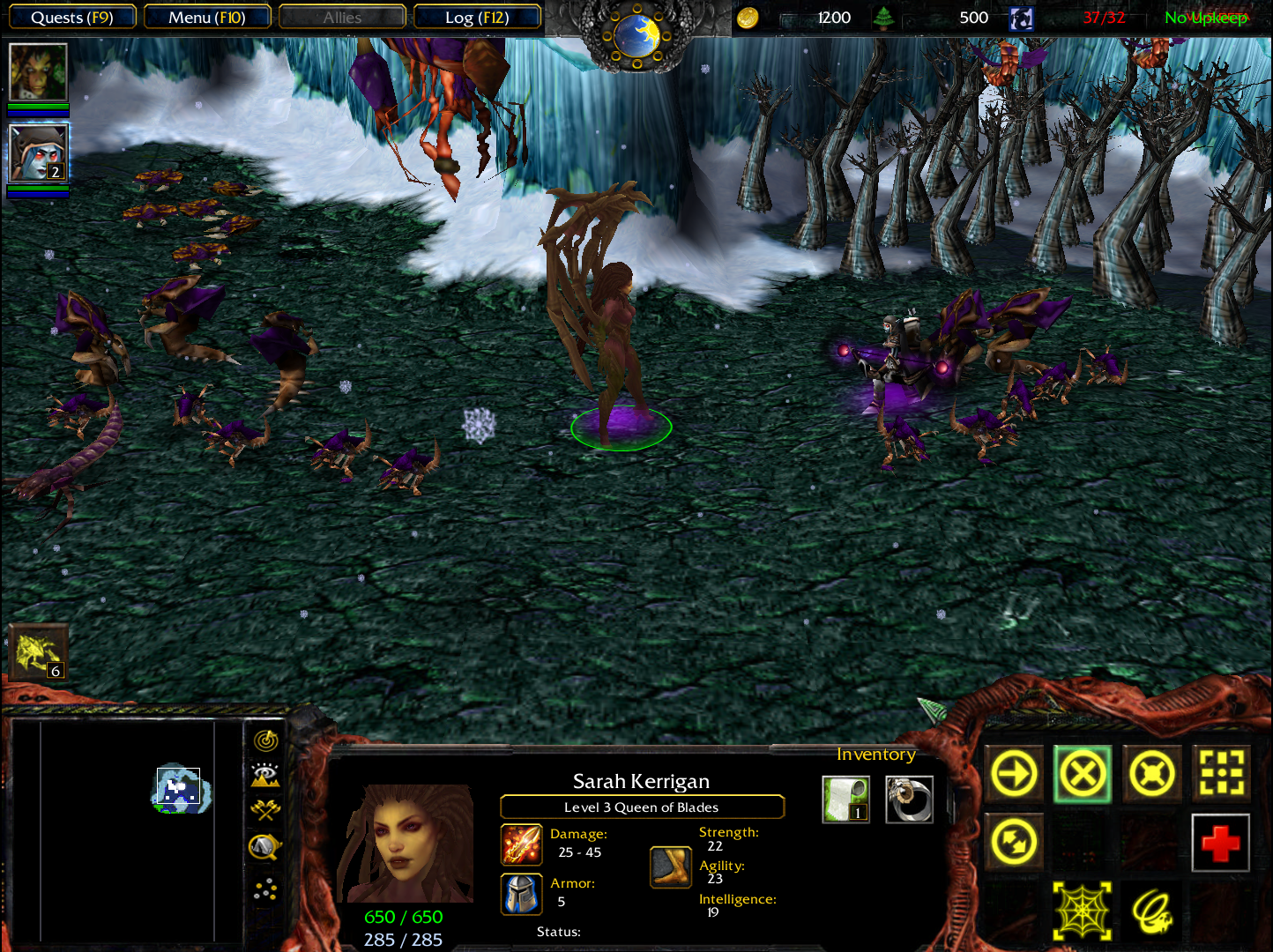 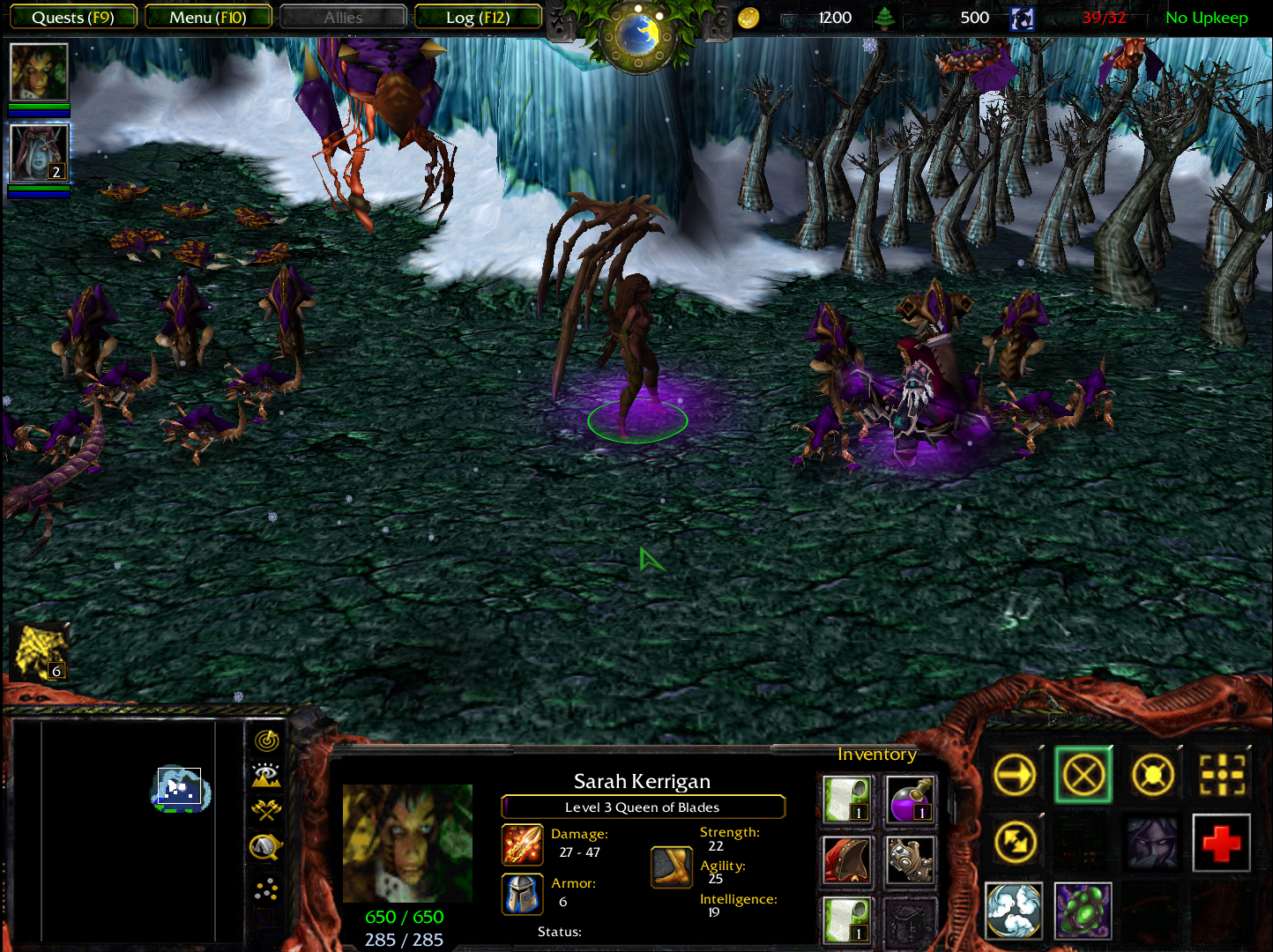 It's been a fun journey. I learned a lot more about War3 modding than I had initially planned to, but it was worth it to make something I always wanted to see.

There will likely be further minor patches whenever I have time to address issues as they're reported. And don't forget this mod now also supports custom games to extend the lifespan of this historic crossover.

You can now play as the Zerg on melee maps. Take the invasion online over Eurobattle.net! Also added support for Custom Hotkeys and the World Editor!

Everything under the hood has been revamped in the latest update to the Zerg Campaign!

Chapter 6 is now available. Journey to Draenor and face the might of the Burning Legion in the latest update to the Zerg Campaign!

Chapter 5 is now available. The Zerg continue their relentless assault on the Warcraft universe in the latest update to the Zerg Campaign!

A big update that improves most campaign levels and addresses many issues. Thanks again to everyone for playing!

Chapter Seven is now available. Play the thrilling conclusion to the Zerg Campaign!

Multiplayer is now available. Take the invasion online over Eurobattle.net!

All core functionality has been re-written in JASS and stored directly in the mod. This allows for more optimized code, as well as making future updates...

Chapter 5 is now available. The Alliance, the Horde, and the Night Elves have united their forces to take on the Zerg. Has Kerrigan finally met her match?...

Hello. It will be work in DotA in this mod? In the morning I getted Desynchronization in ingamero bot

The mod currently is only designed to work with the included custom campaign 'ZergCampaign.w3n'.

Before playing other maps or campaigns, you should turn off the mod by renaming War3Mod.mpq to something else.

Just bumped the planned '1.0' release to next year. There is one more chapter planned, and I didn't want to rush it. Didn't realize it would 'bump' the mod lol.

There will be an update early next month. It will unfortunately not include Chapter 7, but will otherwise be significant. Stay tuned!

Awesome work if this wasn't still TBD I'd have rated it 10 already. Keep it up!

Does this work with custom games too?

New answer as of today: YES

I want to see how this is going Jajajaja
"My Life For the Swarm" Baby!

But,something i want to know,you have any thoughts of doing with terran and protoss? :D