The vanilla game featured a tech system which was somewhat unique for each faction and was appropriate for the timeline the original game was set in. But guess what, for our mod, it was not appropriate, not even in the slightest. Our setting is just too different, so we ditched it.

First of all, an apology is due: We are fully aware that a lot of people expected this series to continue a lot earlier and with "The Mod Explained - Part 2: Project: Planet Death III". That is sadly not happening, we don't have the assets ready to feature the full showcase: We are depending on external sources for certain particles and are currently heavily bottlenecked on the rigging front. In addition we are writing a new back-end for the mod (again) which should take some strain away from the game and make it more error proof than it currently is.

We decided to continue the Mod Explained Series, and skip the Planet Death III article for now, so you guys receive your long overdue update, and we no longer feel bad for not publishing one.

Out With the Old, In With the New! 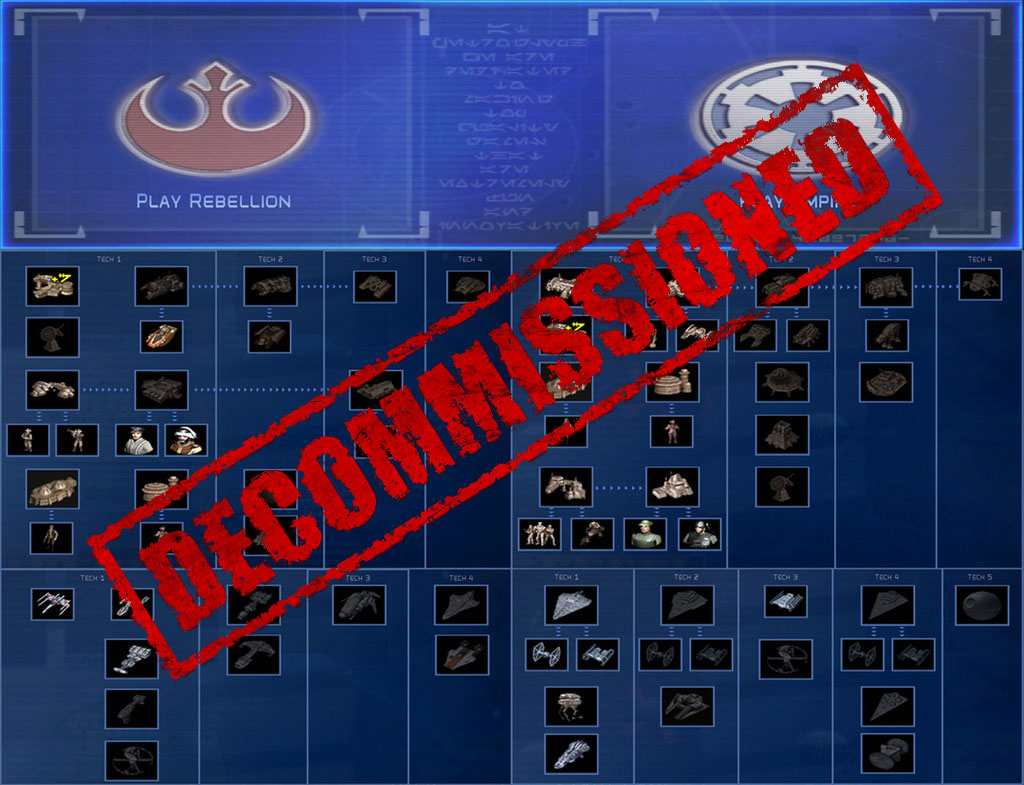 The vanilla game featured a tech system which was somewhat unique for each faction and was appropriate for the timeline the original game was set in. But guess what, for our mod, it was not appropriate, not even in the slightest. Our setting is just too different. The Vong War spans five years, but there was not much technological development to speak of, most people were quite busy with trying to survive. So we ditched it. There is no tech system in the game any more, no more "build tech facility => pay a lot of money and wait a certain amount of time => magically get new stuff". It's gone, all of it.

Though there was one part which grabbed our attention, the vanilla game has five tech levels, and the Vong War spans five years ... and eureka, there it is:
Instead of using the tech levels as tech levels we now use them to measure how far the player has advanced the story with each tech level representing one year of the war. Some might now say: "Hey that's what Thrawn's Revenge is doing!" as it does seem like the same idea on the paper. The TR team replaced tech levels with eras, we replaced tech levels with years or story chapters and so far that sounds pretty similar. But as always, the devil's in the details. TR advances eras via the fate of the Empire's leaders, we have an advancement system for each faction, which due to the nature of the system can only be advanced by the human player, never the AI.

Before we start, for clarification purposes, we've compiled a small list of terms and their meaning, so nobody should get confused (because it can get quite confusing): 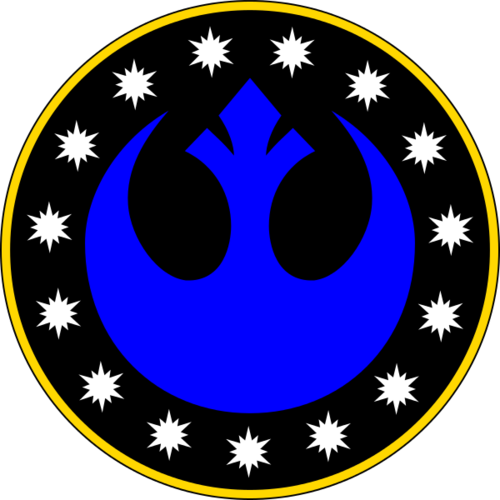 It's not surprising that this faction was both the easiest and the hardest to do. On the one hand we have a lot of story content for the NR/GA thanks to the books, at the same time they didn't really develop new technologies throughout the story arch, so this faction solely relies on story missions to advance through the chapters. This does not mean that not playing story missions locks out content (apart from some heroes and/or hero variants and special weapons which are directly involved with a certain story event), but instead should encourage the player to play those story missions.

Each year has a number of story missions associated with it, which, once all are completed, advance the story chapter to the next year, resulting in new story missions being unlocked. Completing a story mission does have some advantages, as it can reward the player with new heroes, or unlock new research options.

As far as tech upgrades go, the NR/GA doesn't have too many dedicated research projects as they mostly tried to survive the war with the Vong. Still the player will have the option to research certain technologies, provided the prerequisites have been met. Those can either be story events, being allied with a certain faction or owning a certain planet. 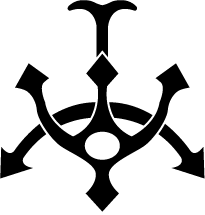 The Hutt Empire proved far more difficult to figure out as their storyline pretty much ended a few years into the war, when they were attacked by the Yuuzhan Vong after betraying them. To make it a little more fun for the player (who likes being wiped out because of story reasons in a game?) we came up with the initial idea to make the Hutts a late-game faction. Relatively hard to keep alive until they are able to build up a powerful fleet. And the one thing you need to build such a fleet is a shipyard.

Apart from staying alive, the Hutts will have to do two things: The first priority is keeping their home sector at all cost, because that's the place where their shipyard is being built in secrecy. And the second priority is to get their slimy fingers on the technology needed to build such a shipyard: From bribing over stealing all the way to military action, the Hutts will have several priority missions each galactic year to acquire the technology needed to build their shipyards, which coincidently is the final task to advance to the last year of the war. 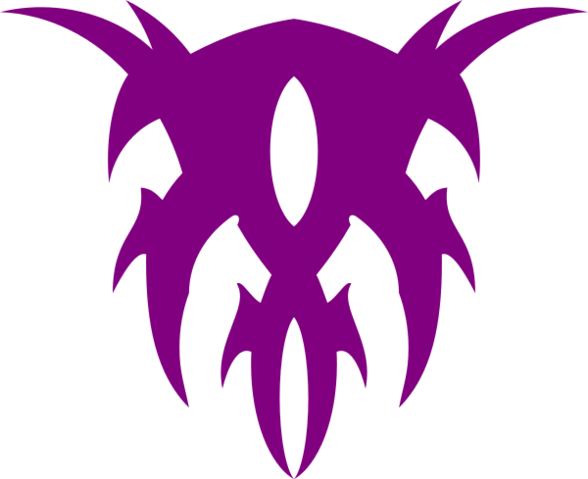 The Vong invaded a galaxy foreign to them, no clue what awaited them and what they would face in battle. Luckily they have a whole caste devoted to making the dreams of Yun-Yuuzhan come true - The Shapers.
There is no such thing as invention, there is no such thing as research, all knowledge that was, is, or will be has already been created by Yun-Yuuzhan and the protocols to make the knowledge come true have been written down in Cortexes of Eight by Yun-Harla's handmaiden Yun-Ne'Shel.

Invading a galaxy is not a course of action which can be dealt with lightly, not even by a race which lives for the war with a society built around pain. That galaxy will throw everything it has against them, a total war. To adopt, the Shapers of the Yuuzhan Vong will have to venture deeper into the Cortexes than ever before, to find the ultimate weapon to claim their new home.

As the Vong, the player will have to research protocols of the Cortexes to unveil the secrets of Yun-Yuuzhan, and to finally unveil the biggest secrets within the 8th Cortex, guarded even from the most knowledgeable Master Shapers. But this also means that the player will have to protect the few research hubs of the Yuuzhan Vong, and more importantly keep the few Master Shapers alive. Not only the enemy is a threat to them, their own curiosity can get them killed too.
Remember, there is no such thing as new knowledge, no such thing as invention or imagination. Claiming otherwise is heresy and punishable by death.

We'll be back with another part of the series soon (or soon-ish), but as some of those future articles depend on assets which still have to be finished and polished, we don't yet know which one will be next.

hmmmm .... yummie ... that will be AWESOME! well as soon as this mod is released - goodbye social life, hello galaxis-wide cleansing of heretics

The Mod Explained imperial remnant next?

I'm not quite getting the question, so ...

Well, to what extent they are usable/playable, role in the campaign? What units are they limited to? Available in skirmish? I remember previously that the YVAW team said they would not be playable as a faction.
Quite frankly I'm only interested in the empire =D, so I wanna know if i can use the beautiful star destroyers you've teased, and weather they'll be others aside from the victory.

Well, you've answered the question yourself: The Imperial Remnant is not a playable faction.
Additional information which is not noteworthy enough for a news article: It's one of the minor factions in the mod and their unit roster is not yet final. But as we're not making units just for fun the chances are good that you'll see some Imperial designs.

Been a long while, since that last happened:
[Insert Burntstrobe's catchphrase here]

The new republic/galactic alliance actually did quite a bit of tech development, mostly counters to various advantages Bong tech initially had over them. Like stutter fire for star fighters, the Yammosk jammer, and so forth.

Those were techniques they figured out as they go, no new research projects or major tech advancements like in the base game. Not enough to build a whole mechanic around. That's what this sentence was getting at.

since we are on tech, will, for the NR/GA, the main starships(new class series) be built anywhere? or only in certain locations? and will major shipyards(such as Mon Calamari, Imperial, Corellian, Hapan[minor] and Sullustan) be built on their homeworld, their sector, or just the galaxy when aligned/occupied. mostly, I want to know the scale of the tech tree

also,unrelated but kinda relavent. you said you won't end up doing Swarm war for the release. can you, maybe a few months or years after you finish this realise, come back and do another release doing even more detail in what you have and add the swarm war conflict?

Seen as there will be a dedicated article covering the shipyard system, I won't address the first part in detail, but as far as buildable units go, it's the same answer as always: There is no final ship list and we won't talk about it until there is.

The first priority is the release of the mod in version 1.0.0 We won't talk (and don't even think) about our plans after that until the initial release. But when we say we won't do something, it's probably best to not hold your breath for it still happening.

One word of advice though: This game is more that ten years old. There are (severe) limits to what it can do and what it can handle.

someday, we need to make a new game, for this stuff to work on