Wasteland Mod is an another try to remake all the missing location from Gothic 1 inside the Gothic 2 version of the Valley of Mines. The modification doesn't offer any sort of plot or quests other than the main one provided by the original copy of the game. It only adds new locations while trying to maintain the vanilla feeling of the Gothic 2 Valley of Mines.

What's so different about the Wasteland Mod?

Other modifications, like G2 Returning or Unnamed, give new plot. There are people though, like me, who prefer playing the original game, but don't like how Piranha Bytes deleted many old locations from the Valley of Mines. This modification restores them while the main plot stays intact.
Also other modifications often fail in making the world feel coherent. For example Unnamed gives a vast, green forest behind the palisade, while the rest of the world is dark and depressing. In Wasteland Mod the forest is as dark as the rest of the valley.

What locations are included in this modification?

- Free Mine Camp and terrains around it
- Orc Town
- The entrance to the Old Mine
- Troll's Canyon
- Quentin's Camp
- The area above the Collapsed Mine
- The inside of the Sunken Xardas' Tower
- The whole area behind the Great Orc Palisade, including the Monastery, the Fog Tower, Psionics Camp and the entrance to the Orc Cemetery.
- Areas around New Camp(Water Mages chambers, inn)
- Orc Graveyard
- Free Mine

Who exactly this mod is made for?

For players and modders, of course. Players may want to see the old valley full once again, but not necessarily with new quests(which would feel out of place without dialogue sounds). The modders can feel free to use this mods resources to base their own modifications on.

What's the exact status of the mod?

This modification is finished.

This modification has been in production from 2008 to 2014. It's my first and probably last mod for Gothic.

As you can see, even though this site has been established just several hours ago, the second version of the mod is already available for you to download in three different languages. 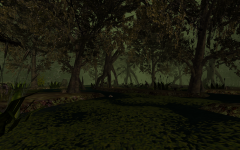 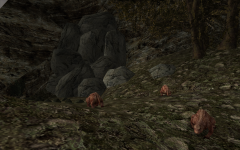 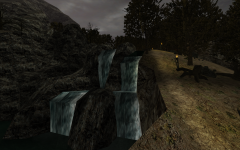 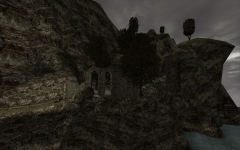 That's because the first version of Wasteland Mod, which was an open-beta, was released in February. After that I've been working on a patch for it, which eventually evolved into the second version.

The first version added such new places as:
- Free Mine Camp and terrains around it
- Orc Town
- The entrance to the Old Mine
- Troll's Canyon
- Quentin's Camp
- The area above the Collapsed Mine
- The inside of the Sunken Xardas' Tower
- The whole area behind the Great Orc Palisade, including the Monastery, the Fog Tower, Psionics Camp and the entrance to the Orc Cemetery.

But it lacked many locations which could have been added in the first version without breaking LORE, so I decided to include them and name the new, patched version as "Wasteland Mod 2" instead.

Also the second version fixed many issues found in Wasteland Mod Open-beta. They are fixed now.
The full list of most important changes can be seen below:
- Added Goblins' cave between Old Camp and PSI Camp
- Added chambers of Water Mages in New Camp
- Added Inn in New Camp
- Added cave near New Camp
- Added Free Mine
- Added Orc Graveyard
- Updated textures in some new locations
- Added pickable items in some new locations*
- Fixed chests and containers
- Fixed gate in the Monastery
- Fixed Winches/Wheels
- Fixed collisions of old and new vobs
- Added and updated monsters in new locations
- Added a borderline on sea water so you can't get across and fall into the abyss
- Fixed Polish scripts
- Fixed HUMANS.MDS. Now interactive objects such as low beds, fireplaces can work fine**
- Added waynet in Old Camp Prison
- Added new map texture for Valley of Mines
* Pickable items are only to make new locations feel more complete. They are similar to other items found in the Valley of Mines
** Interactive fireplaces are known to be broken in Gothic 2. They are fixed now, but some may not need to use TORCH to lit them. Those will be especially visible in NewWorld.zen and AddonWorld.zen, which were not modified by this mod. Thankfully it's only cosmetic and Gothic 1 suffered from the very same problem.

The second version of this mod was released yesterday, 23 June 2014.

We check out the some of latest modDB and indieDB headlines and prior weeks Monday Night Indie stream.

This tutorial will help you successfully install the modification.

Full resources used to make this modification. You can use them to make changes to this mod or to base your own modification around it. Just remember...

Full, German version of the modification. Please use mediafire mirror links(on main page) to download if this link doesn't work.

Full, English version of the modification. Please use mediafire mirror links(on main page) to download if this link doesn't work.

Full, Polish version of the modification. Please use mediafire mirror links(on main page) to download if this link doesn't work.

Is this compatible with l’Hiver English edition?

The mod replaces NewWorld and OldWorld zens and modifies Scripts a bit so I don't think so.

Hi,
what about old towers on the cliffs?
They're still here?

Do you mean the fog tower? If so then yes, it's included. If you mean the watchtowers around the old camp then as far as I remember they were included already in the vanilla version of the game.

this is weird! finally I managed to run your mod, and found new areas (All right - been only in old mine (which collapsed in G1), swamp camp, old castle, goblin cave, orc grave yard) and it doesn't look like in your pictures! in swamp camp - no orcs, ship port, etc. also no trees in the area behind the fence just bare ground.. would you be able to advise on that? maybe I installed the wrong file? (version 2)

same was for me afaik, couldn't get this sorted. was installed on the fresh Gothic game.

Just to say I have added an installation tutorial to this page. Maybe it will help.

It sounds like something is overriting my mod. You sure you don't have any other mods installed which change world and story? Gothic cannot run more than one such mod. Unofficial patches can also produce this problem.

did anyone try to install this mod?

I have a few questions - what did i do wrong? I believe I followed instructions (put mod files in the correct folders) but no results - mod features didn't appear in the new game. I started the new game using Gothic starter as advised.

BTW - can this mod be used with the old save games?

I am looking forward to hearing from you.

Make sure you don't have other mods or unofficial patches installed at the same time, because they can overrite the game files. The best way to make it work is:
1. Install Gothic 2+NoTR
2. Install playerkit
3. And then install Wasteland Mod 2
Additional mods can break my modification if they edit world or script files.

The Golden Gate Gothic II - The Night of the Raven

Inwazja PL Gothic II - The Night of the Raven