In the 40th millennium, on the planet Tallarn, the forces of chaos have suddenly appeared with a large force which is growing every day. However Tallarn is home to thousands of colonists, as well as imperial forces that would fall into the hands of chaos and heresy without intervention.
You play a newly into the imperial fists inducted marine, and have been stationed on the Talldarn training facility. Right after you have finished your training, the war starts raging.
All that's stands between the planets population and this unknown power is you.
Will you serve the emperor?...

You must form your destiny.

Q: When will this total conversion be out?
A: Whenever it is ready. A total conversion is a huge modification, and takes a very long time to get finished. Just track the mod, and we will post updates from time to time.

Q: How can I join the team?
A: Visit our forum, register, and look at this thread.

Q: Can I help even if I can't model, texture, work with the G.E.C.K. etc.?
A: Yes, we need lots of reference images, especially of space marines, and chaos space marines. You can make pictures of almost everything that has to do with warhammer, but as previously mentioned, space marines, and chaos space marines are wanted mainly. Scenery is fine too, just take a picture of the top, bottom if possible, left, right, front and back. It is important that you take pictures from all these view points as our 3D artists will have to create anything that they cannot see purely by imagination. Send your images to manuel@emotions.at (DarkMessiah) or return_of_plague@hotmail.com (Revengous) with a short description.

Q: I have a suggestion! Where does it go?
A: That goes into our forum right into this thread.

Q: I have a question that isn't on the F.A.Q. what do I do?
A: There are a couple things you can do, if you think it is important enough to be put on the F.A.Q. then send a personal message to one of the admins right here on the ModDB, otherwise post it right here or, the best thing to do, post it in our forum.

Q: Hey! theres this file avaliable over at FO3 nexus, the URL is...
A: As we have told you dozens of times, we are making all of our models by ourselves, we do not need help from someone else, so please do not give us links, your comment will just be deleted

Q:Hey! when will we see an update?
A: As a dedicated team we would rather spend time working on the mod rather than presenting pictures about the mod, so for everyone wondering, we are not dormant but activly working in private. We would also like to remind everyone that we have this page here, which we put our quality content, and we also have our own personal pages, where some of us post WIP's from time to time, so feel free to check them out.

Q:Want to see exclusive updates?
A: You can! check out our Shattered Lineage development group! all WIPs are uploaded there!
Moddb.com
check it out! and watch it for future updates =D

Dear Modding community, we know our updates have been few and far between when it comes to this site, but we wanted to assure you know that we have never stopped working on this project. We are continuing to expand Shattered Lineage's assets and scope, in order to create a truly authentic and immersive Warhammer experience. We have made a host of new models, and we hope that these illustrate that we are not merely settling for mediocrity, but are striving to make something that will be both enjoyable and canon. We have been focusing heavily on laying a foundation of quality models and concepts that will allow us to build an environment that both feels and looks like a Warhammer game.

Media
Our 3d modellers have been very busy since last time. So here's some new content!

Dreadnought
DarkMessiah has worked hard on the dreadnought, its almost ready for animating and texturing! We are very excited about it and look forward to seeing it in-game. The following few screens show the render of the devastating multi-melta, the heavy duty gun that is capable of burning through anything, including those foul chaos tanks! 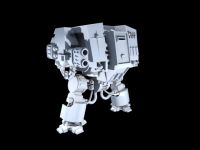 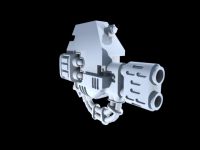 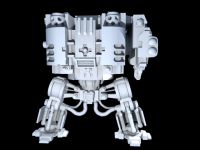 Extirpation has gone into overdrive, chewing out models constantly, to a very high standard.

The Thunderbolt is one of the two main fighter patterns used by the Imperial Navy. While not as fast or agile as the lighter Lightning fighter, the Thunderbolt is more heavily armed and armoured. As such, it is more commonly used as an air superiority fighter, while the Lightning is usually relegated to a reconnaissance role. 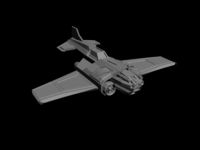 Imperial Tanks are a necessity for the imperial divisons on Tallarn, Providing defence from the desert storms and heretics a-like. Here a screen of the mighty Leman Russ 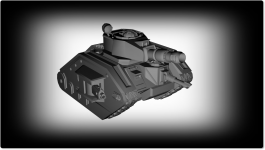 Basilisk
The Basilisk is the main line artillery piece of Imperial Guard regiments throughout the Imperium. It is armed with an Earth shaker Cannon. It can be mounted on Chimera bodies or be fixed, such as shown below. The Imperium and the chaos followers use this mighty piece of artillery, to devastating results. 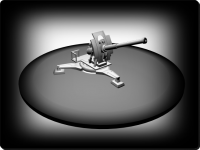 Art
Our recently acquired artist “radioblur”, has been working hard making sure that our produced models are proportionately correct to their Warhammer counterparts. He has also taken on the task of drawing concept art for the mod, in order for us to have a collective vision of how both our characters and the landscapes should look. His first piece for us is amazing and we look forward to more concept art. 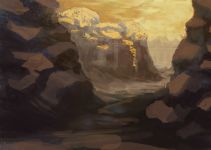 Programming
Synaptic and Revengous have been working for us in the technical department, with some code already produced to alternate weapon types and the beginning of psychic powers, along with a custom motion blur effect. More this will be seen in coming weeks, as the mod moves closer to a beta release.

We have a lot more content to show, including animations, textures and more models. If you have any questions feel free to drop by our forums and we will be happy to answer them.

The Shattered Lineage Updates Archive is always availible to be called upon, so feast your eyes upon the new (and mostly old) updates.

so im guessing this is dead then?

this mod is so dead its not funny :'( let dead mods rest in peace

Is dead this mod?

Can't wait for this to be done, but as all true crafts of amazing genius, it takes time. So I will wait, and pray to the Emperor that things go well for the Devs.

Which music you will use in mod?

Are you guys still at it?

Unsure, were running into walls, both with engine, and with concept. Its all up in the air, and we could either be switching engines, or revising or premise.