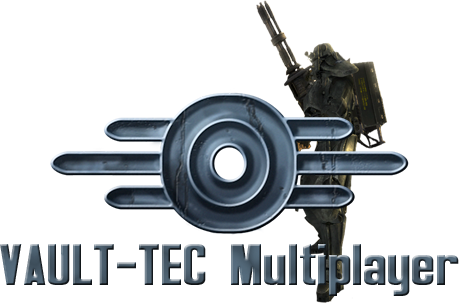 Vault-Tec Multiplayer Mod ("VaultMP") is a multiplayer mod for the PC versions of Bethesda's award-winning role-playing games Fallout 3. It's currently in development, but is going to support the following:

The main goal is to enable players to roam the open worlds of the wastelands and experience all the exciting features of the games online.

What vaultmp is - and what it isn't

Mod is actually not the best fitting keyword in my opinion. VaultMP is supposed to be much more like a framework. It aims for extensibility and scalability. The goal is to provide the tools necessary to create engaging online environments in the Fallout games. It does not impose any limits on what you can do with it (i.e. maximum player count), neither does it has any bias towards any kind of multiplayer game.VaultMP is not a co-op mod, a MMO, or anything else of the like. The community is free (and encouraged) to take VaultMP and develop server-side game modes, composing the actual rules of gameplay. Therefore VaultMP exposes a rich scripting interface, with a C API at its core, as well as native support for C++11 and PAWN scripts.

Scripting is one of the most important features of Vault-Tec Multiplayer Mod. It grants access to in-game Objects and allows to manipulate them. With the help of scripts, it is possible to customize the game experience and even create whole new gamemodes. Scripts are executed server-side by the dedicated server of vaultmp. Users who code scripts are known as scripters. They mainly use the scripting functions and scripting callbacks (see VaultMP interface) provided by the mod to write a script. A script can be written inC++ or in the PAWN language. See the section Installing a script in the dedicated server setup guide on how to load such a script.

Scripts can be written in C++. It allows for maximum flexibility and an extremely large set of possibilities. An example script comes with the vaultmp package including project files for Code::Blocks IDE. C++ scripts need to be compiled as dynamic-link library (shared object for Unix) files. The entry point of a C++ script is exec.

Scripts can be written in PAWN. With regard to the VaultMP interface, PAWN scripts can be as powerful as C++ ones. An example script comes with the vaultmp package. PAWN scripts need to be compiled with pawncc.exe (comes with vaultmp) and the -C64 command line option appended. The entry point of a PAWN script is main.

Vault-Tec Multiplayer Mod is a rather huge project and I would be grateful if it had some more developers. Work on vaultmp can be exciting and very diverse. It deals with the game engine (low-level), networking code, scripting and various design patterns. Most parts aren't easy to understand so you are required to have some well established C++ knowledge. However, I'm happy to answer any question regarding the source code!
If you are interested, write me a mail (recycler@vaultmp.com). The source code is available here:Github.com

Q: Theres no servers, whats going on?
A: VaultMP is intended as a frame work for scripters to host custom servers. Our goal isnt to host servers, but to give you the tools to host your own.

Q: It keeps crashing, what should I do?
A: Gary 2 is a very early alpha release being developed almost single handedly by Recycler. This level of instability is to be expected. Report all bugs on the official forums.

Q: Will you support mods?
A: Yes down the road mods will be fully supported. You should be aware that any mods that contain custom geck scripts will need those scripts converted to C\C++ or PAWN to work with VaultMP. Currently, any mods activated in your load order, will be deactivated when you launch VaultMP.

Q: I dont see any Npcs, where is everyone? What about Quests?
A: Npc's and quests are not currently synced, so they have been removed as to not give the impression that they are synced. Both Npc's and quests will eventually be added once there synced.

Q: What about items?
A: All items within containers have been removed from said containers. Any item that was originally placed in the gameworld outside a container will still be there. Lastly, the console is available to use once ingame, allowing you use item codes to give yourself armor/weapons/ammo/stimpacks if you wish. The console will eventually be removed as we move from alpha to beta.


Disclaimer: VaultMP PR run this page with the permission of the mods author, Recycler. If you have any questions related to the multiplayer which cannot be found in the FAQ, please head over to the official forums. VaultMP is in early alpha stage. You need a decent level of computer knowledge to set it up a server at the moment. It is not released for production, just for testing by experienced users.


This is an intermediate release with a lot of new features and fixes. It still lacks server-side damage calculation / hit detection, which is planned for gary 3.

Please update your version. Previous releases will no longer be able to use the master server.

Note: the Windows version of the server comes with pre-compiled foundational scripts. On Linux, you have to compile them yourself. Ask in the forums or checkout the makefile in the repository for help on this.

This is a bugfix release ("gary 2.8") which resolves the following issues: Desync of alert / sneaking state "Radiation suit equipment bug" vaultgui no...

Future vaultmp releases will no longer support Fallout: New Vegas. I decided to streamline my work on vaultmp. Maintaining compatibility with both games...

This is a bugfix release ("gary 2.7") which resolves the following issues: Client crash related to firing of weapons Overall improvements and bugfixes...

Soo, whats goin on with this mod is it happening or not kinda got to this stage in 2013 n hasnt gone anywhere it cant be seriously taking this long?

I hope this gets finished, it would be great if I could play Fallout 3 with my friends...

Ah man is it dead???? and does anyone know if it is split screen?

It is but some folks on the fallout 3 nexus are trying to get in touch with the creator to bring the mod back here is the link
Nexusmods.com

I hope he continue this for Fallout 4.