It's a class-based mod, based on the original Quake I Fortress. "Class based" means that the players can choose between different kind of players. Each kind has certain unique skills, but also has setbacks to keep things in balance.

An example is the "Heavy Gunner". He has a big Mini-Gun, and is extremely strong. You would say he is the best class around, but he is very slow, and is hard to maneuver. He is strong, but also very slow, which makes him less of an advantage.

The Unreal Fortress mod stars 9 different classes, all with different skills and different tasks. Each class also includes specific weapons directed towards the profession of that class.

UnF also includes three new types of game play. These add a large amount of variety to the game since the goals for Unreal Fortress are dictated by the game type that is chosen. The gametypes are the following: 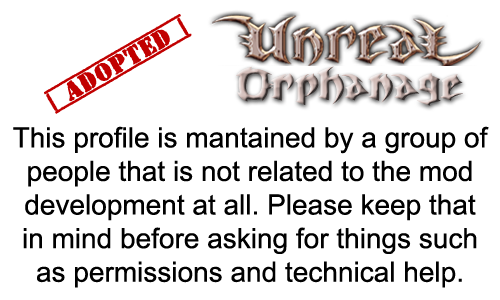 As taken from the Unreal Fortress official website: The closure of game.net (formally barrysworld) means that there are now no online servers and no ftp...

Full installation for Linux based computers of the mod Unreal Fortress

This is the trailer archive of Unreal Fortress, is contains a video in a DIVX format

20 new maps produced by the community and approved by the Unreal Fortress team! In adition, includes many other things, such as wallpapers and icons...

Hi. i playd this game for hours, this mod was way more fun than UT, this was realy a teamplay game. It was sad to see people disapppear and server going off. UNFE came out but with no succes.
I wonder is this game still would run in win10...
If any server come online again feel free to warn me... :)

Interesting, will have to check it out

The arsonist was always the absolute worst class.

nope.
The arsonist objective is not to kill but to incite chaos in the enemy team with the fire based weapons so that the lighter classes can go through the enemy defenses.

this mod is one of the best class based mods ive played...my only complaint is graphics....the characters look like they were attempted to be realistic but fell short...and the simple fact that every character is male...perhaps in another release you could create a few female characters? other than that the weapon balance system and everything works out perfectly :3 9/10

How do you change your class in the game

you need to setup a menu key or a special ability menu key..they should be configurable in the preferences menu..

Quote:
I wish there was a 2k4 verson of this mod

There is a UT2k4 version coming:
www.unrealfortressevo.com

Sorry, I forgot to update this profile, it was still linking to the old UNF site.

Just check the last newspost and give it a try ;)