"The last thing I remember was our train being stopped in the woods. OVERWATCH told me I was needed for questioning, so they locked me in one of those cold pods and stuck me on the next train to NOVA PROSPEKT. I can still see my WIFE watching me drift away.

Now, here I am... Only things are not how I expected them to be. How long have I been unconscious? A few days? A WEEK? Something has gone HORRIBLY WRONG..."


UNION is a short single-player map pack for HALF-LIFE 2: EPISODE TWO set in the aftermath of Freeman's blow at Nova Prospekt. ANTLIONS have broken in and run amok, the Combine forces lay decimated, but an unlikely alliance is forged between a lone surviving PRISONER and an escaped VORTIGAUNT. If they are to break free they will have to rely on one another for help.

This is the first part of a possible mini-series and focuses on combat, exploration and AI teamwork. Enemies are primarily antlions and zombies, though future installments would feature Combine forces. Future chapters are not confirmed, and this part does have its own full story arc.

I'm getting close to something I've wanted to do since Union's initial release over a year ago, and that is to create an updated version with some new additions and changes. This project (affectionately called ReUnion) will feature full custom voice acting courtesy of Chris and Anne Fox to allow our Vortigaunt companion to breathe new life into the story, as well as numerous graphical upgrades and changes to gameplay, taking on board the valuable feedback I have received from players. I aim to have all this conveniantly packaged as a fully-fledged mod (rather than individual maps) which enables a few other nifty little features. 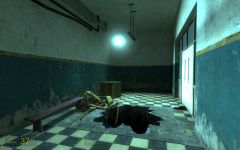 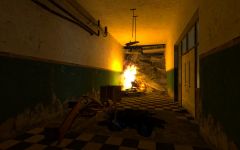 The changes to this early corridor imply that Nova Prospekt is larger than the accessible areas, and that it is falling into significant disrepair. These little touches will combine to create a richer experience for the player and reveal more backstory.

If you were curious about the background of Union's protagonist, or where he might be headed after it ends, be sure to check out ReUnion when it's finished. There's no set release date yet, but watch this space for any updates.

Videos are now available on ModDB showing Union in its entirety.

First part of Union post-mortem is available at my blog.

Union is available now online, and later this month in PC Action magazine.

One new screenshot released to whet your appetites for the nearing release of Union.

Broken. Zombine doesn't blow the door the door after the first arena battle. Seems to be missing things like the Vort charging my suit (why do I have an HEV suit why am I Freeman?) and there seem to be missing items like grubs. Too hard with MMod.

Am using the Standalone 1.2 with MMod.

Really enjoyed this. Not long enough to be boring but not short enough to be a waste of time. Thanks for making it.

Good Mod, well done maps especially.
My only big problem is when you have the antlion wave. See, I play on hard mode and its not even that the antlions are harder to kill. Its that its incredibly difficult to protect the vort. He doesn't try very hard to save himself. He goes for antlions near to you rather than closer to him. Meaning he takes tons of dmg then dies. Also, its difficult because you will waste a lot of time and ammo going for an antlion he has in an animation. And from what I can tell you cannot shoot through him, wasting more time.

Other than that, it really is a very good mod.

Even on Easy it's impossible

Is this still being worked on? His blog hasn't been updated for months.

Thanks for the interest. I'm currently working at Bright Light studios (EA) so I have hardly any time to work on personal projects. ReUnion has taken a beat seat. I'm not ruling out finishing it, but I'm making no promises either.

i heard that Bright Light studios was disbanded by EA so where are you?