Uber Arena is a mod that takes the standard gameplay of Quake 3 and attempts to build upon and revitalize it with new gameplay mechanics and items. It has NO loadouts, NO abilities, NO champions, NO item timers, NO mechanics that use random number generators, and NO on-spawn inequality. All mechanics were designed around Quake's core principles such as on-spawn equality, item control, positioning, and movement, with the intention of enhancing these critical gameplay elements and introducing more skill without undermining the foundations of the game itself.

- Added an alternate upgrade for the Arc Lightning Gun for duel mode only. It multiplies the LG's knockback 25 times, allowing for pinning enemies against walls.

- Added Light Armor (gives 25 armor points). The entity name used is identical to the one used by the CPMA mod, which means any maps that use CPMA's light armor will work with Uber Arena as well.

- Conservation now allows players to use weapons that have run out of ammo. In addition, the ammo and weapon pouch counters turn green while Conservation is active.

- All sounds converted from stereo to mono, for compatability with standard Quake 3.

- All 2D icons and trampoline surfaces are now unaffected by r_picmip.

- Entire codebase moved to the ioquake3 codebase. Does not affect compatability with standard Quake 3. 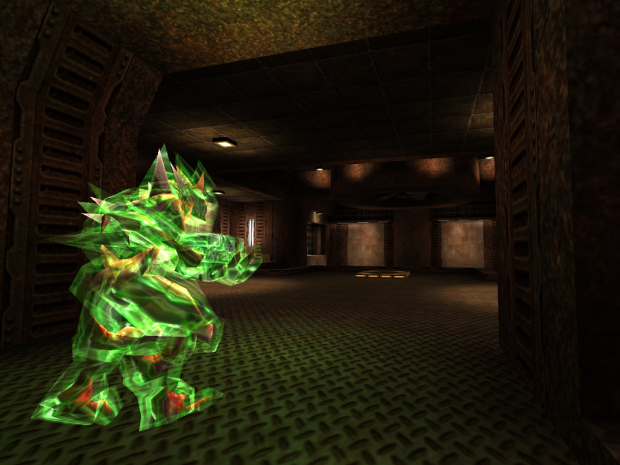 - possibility to drop the weapon
- possibility to disable the uberweapon
- weapon counter to know how much weapons i need for uberweapon
= like 3 points over the weapon symbol or something else
- new icon for "super weapon crate" - maybe too colorful?
- maybe create a tutorial map (q3ua0)?
- you can collect more than 3 of the same weapon - why?

Hello there ZerTerO - Thanks so much for your response! Glad to hear that you like it and that you have suggestions to help it improve in the future - I love hearing people's thoughts!

I definitely have some of these ideas already on the agenda, such as the weapon counter for keeping track of uberweapons - it's almost word-for-word what I had in mind, so it's really awesome to hear you had the same thought!

The super ammo crate intentionally uses multiple colors to indicate the fact that it's a universal ammo crate that gives ammo for all weapons, and since different weapons have different assigned colors, I liked the symbolism / visual language that the different colors convey. That being said, I'm certainly open to some changes, like reducing the number of colors (maybe just two or three dominant colors). I might also think about changing the skin on the super ammo crate model itself, since now that I look at it again it looks like someone vomited a rainbow on it haha. Maybe a white skin (like TA'S chaingun ammo box) while the icon itself still has multiple colors.

For being able to pick up more than 3 of the same weapon, there might still be value in picking up weapons just to deny them from other players. Preventing someone else from getting closer to an uberweapon by taking it before they can would be a possible reason to do so.

A tutorial map is not something I had considered but sounds like a very interesting project, and would be a great, intuitive way to introduce people to the mechanics of the mod. Rooms for testing out uberweapon functionality, or power-up demonstrations, like a room where the player gets the Scavenger and has to use it to grab an item on the other side of an unreachable chasm. Definitely a lot of potential here and would be a fun project to undertake, so I'm really happy you brought this to my attention!

If you are interested, I have also set up a dedicated test server for playing Uber Arena online, which can be connected to at 47.219.38.45. Would definitely love to see how the mod plays out with human opponents!

Once again thanks so much for your feedback; comments like this both help improve the mod and get conversations rolling, especially in regards to arena shooters in general and experimenting with different ideas to help innovate the genre while adhering to the principles (like on-spawn equality / item control) that make arena FPS games exhilarating and challenging.

If I may chime in. For the super ammo crate color, retain the multiple colored icon, but have the box itself subtly change from one whole color to another.

For the whole weapon counter thing. My gripe is that it's really hard to do weapon denial when you have your own general weapon count to think about. I think what Zertero thought is(and he may correct me on this if I'm wrong), It'd be a good idea to try out if weapon count on Uberweapon-ed guns is ignored. For example, if I already collected three rocketlaunchers, then any other rocketlaunchers picked up would not be counted on the baggage.

As for my general impressions so far, I really like it. My most favorite uberweapon is the shotgun. Also like the scavenger powerup. I hope this continues.

Color cycling on the super ammo crate would look very interesting! Gonna have to do some shader experimentation soon...

Now that you put it that way, I agree with the notion that copies of weapons beyond the third shouldn't count towards your weapon limits. It's not something I've thought about, but absolutely makes sense, so it will be on the agenda for a future update.

Glad to hear you like the mod so far, and thanks so much for your review from earlier! The Scavenger power-up is also my favorite; sweeping up items with weapon fire is a lot of fun and makes for great surprises, especially if you're firing a rocket from afar at an item all the way across the map, with nearby players wondering "what just happened?" when the item suddenly disappears. I also really enjoy the explosive shotgun for just how satisfyingly devastating it is.