This is just my humble tuning pack, to make the game more enjoyable to play. It's mostly personal preferences, various little inspirations from Red Orchestra and Men of War series. Another try of trying to catch the thin perfect line between realism and balance.

While the damage model is more "realistic" than vanilla game,This is not a hardcore realism mod, far from it. Fun in gameplay and immersion is more important to me.

Get the Win Condition Pack for this mod for full effect. No seriously, get it. Essential, Quientessential, a must. Some features are only enabled through this.Including but not limited to:
-Camera Zoom
-Game modes
-Economy tweaks
-Game modes
-AI tweaks
-Ability rosters (future)
Here, TTPWCP.

Only Soviets, USF and Ostheer/Wehrmacht are done by now. I have special plans for OKW, once infantry combat of eastern front is set in stone, I'll make sure to add them too. Contrary to vanilla, playing as OKW will be harder than playing as USF. But that's just future.

There are surely stuff that I forgot to say. New units, defense emplacements etc. go without saying.

As you can see, infantry only focus will last for a while. Regarding tanks, you can expect a unique system, which won't be all about who has the bigger gun or larger armour.

You can provide your feedback both here and on Steam. See the Steam discussions too!

If you'd like to help, I can use some testers & icon makers. The mod is riddled with balance issues which I can't test all alone, and I can't make icons out of some technical issues. 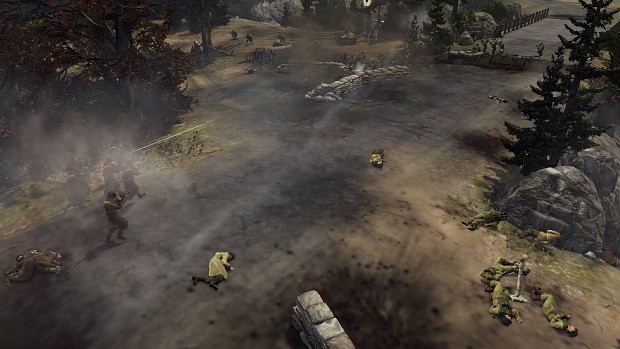 So, what are the news? Well, a lot of stuff has been added ver since the tank combat update, both while trying to "normalize" the fragile balance which was ruined with tanks, and adding new content, because new is almost always good, right?

Well, was a long list. Stay tuned for updates!

After 17 days of the first release, today I'm releasing the first update with playable tank combat!

Just posting a news piece for the sake of posting, celebrating the authorisation!

To anyone wanting to download this mod, but lack the Steam version to dl it through the Workshop, use this link here.
Steamworkshopdownloader.com
Just copy and paste the Workshop link and it will give you a DL link.

How do i install it?

Infantry only is something that needs to be in every game where it's appropriate, glad you added this mode. I don't currently own CoH 2 (This makes me seriously consider buying it) but in the first, I loved playing with a very infantry-centric force but my opponents (Especially the AI) would just overwhelm with tanks and other armour just as it starts getting good. Would you consider adding different "tech levels" so to speak, where the first is infantry, second is infantry + MGs, Mortars, third is that plus soft-skin vehicles, Fourth is the same plus light armour and field guns, and so on?

It wouldn't be top priority right now, but nothing is out of bounds in consideration. Of course I'd love to add such a variety of game modes.

Also given the normal pace of the mod, standard annihilation isn't very tank-centric either; you can only build infantry and perfectly play, you wouldn't be overwhelmed if you play strategically, at least against AI. Though factions vary, infantry-centric gameplay is very suitable for USF where enough number of Bazookas can take out any given tank, and least suitable for USSR where main infantry AT weaponry is less-than formidable Zis-3 guns and tiny ranged AT-nades.

Thanks for the compliments BTW!

If you figure out an inventive way to circumvent the tuning setup for upkeep without simply cranking the population per unit down, please let me know. I think it's probably in upgrades for a unit but I haven't tested it as of yet.

Also a list of your new tank criticals and what they do would be nice to see. :)

I didn't quite get what you mean in the first statement... And I though my English was good, but most certainly yours surpass mine!

The new criticals are mostly basic, a crew death for each crew member are the new ones, while the rest of 11 total are unused vanilla criticals, either not modified or modified slightly: Drivetrain broken, Turretrail broken, Engine destroyed, main gun etc. I only added them to the list, where they weren't.

Current release, only T34 and PzIV have criticals implemented, a few hours later today most tanks are getting them, it is