About
The Way is a small Half Life 2 mod created in May 2007 by Group 4 on DADIU, the Danish National Academy of Digital, Interactive Entertainment. The group consisted of students from different universities and art schools in Denmark.

The game production was meant as a way to train the group in teamwork and as a chance for the students to use their game creation skills. It is not a complete game and should be seen as a released prototype. This mod will not be updated any further.

The Way is an action arcade experience that we hope you will enjoy trying out!


The story
You are The Bard. Honouring the tradition of your people, you have come to the ruins of old Kc'tall to face The World-Eater. Eons ago, in The Time of Legends, your people worshipped The World-Eater as Qu'tall, God of conquest. In his name you subjugated an entire continent, countless cultures and vast lands. But left with nothing more to conquer, Qu'tall went mad, turned inwards and swallowed whole his own people. Your tribe was the sole survivor of the cataclysm. The Bards and Storytellers of the culture, you were sheltered by your patron God, Itotia, God of Arts. It is in her honour that your people, once in each generation, send a Bard to face the World-Eater.
You wield The Instrument. You have mastered its sacred songs. Songs of power and beauty. So powerful they can shatter stone, so beautiful they can lull even Gods to sleep.
You have come to the Temple City of The World-Eater. He is once again awakening to sate his eternal hunger. With the instrument you brave the temple city, avoiding the dangers created by the awakening of the World-Eater. Because the old god will use the whole temple city to try and stop you. Statues will come to life and the very floor beneath your feet will try and throw you into your death.
Should you fail to defeat him he will rise and devour the world. It's a heavy burden you carry, but there is no return. Countless Bards have walked this way before you. It is The Way of your people. And it will lend you strength.

Game controls
Xbox 360 controller:
Rotate the right thumbstick clockwise to set your instrument in motion. Press and hold the right shoulder button and aim with your arm. Release the shoulder button to fire. Press F1 in the game for more details.

Keyboard and mouse:
Rotate your mouse clockwise to set your instrument in motion. Press and hold the left mouse button and aim with the arm. Release the mouse button to fire.

The Way is a "one month only" production that we have done through the month of May. You play as a bard on a quest to defeat an evil god rising from below. your only defence is your musical instrument that can create powerful waves of sound.

This mod can be considered a prototype because it was meant as a gameplay test for the instrument that the bard uses to destroy four pillars in the level. You can rotate your mouse to use the instrument but an Xbox 360 controller is a bit better, but also harder. Press F1 ingame for full instructions. 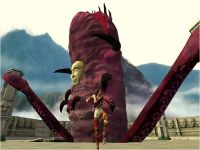 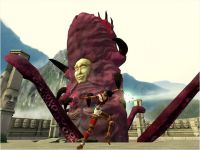 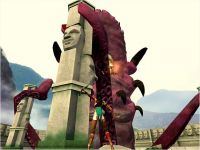 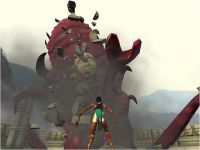 The work on the mod has ended, so it can be considered finished, but it is not without bugs. If you get caught in a pillar you may need to restart the level by pressing 'p'. A few animations can be jumpy at times too.

We hope you enjoy our mod! Find it here.

Full mod installer for The Way. You can play using either an Xbox 360 controller or keyboard/mouse. Rotate mouse or right thumb stick clockwise to swing...

I really liked this mod... What are the team members from this up to now?

a 0 out of 10. But you might like it.. It was a bad idea to have too many cooks here, spoiled the stew on this one...that goose is cooked!

Don't use retarded metaphors to describe a mod -- it helps no one.

Needs a prequel mod for a background story, and it needs a better combat system.

Its so obvious that you took inspiration from Cambodian culture.
=O

Im Cambodian so I would know that the face is actually Vishnu =o.

=o. Unless its different in the story.

awesome pink thing.. anyway, i prefer mod with a lot of blood and gore :P

WOW really nice work with the engine thats for sure!

Why so much hate against this mod? Only an idiot would look at it in the wrong way, it's great development guys, keep it up.

Single Player
Tags
Embed Buttons
Link to The Way by selecting a button and using the embed code provided more...

The Battles of the Clone Wars Star Wars Battlefront II