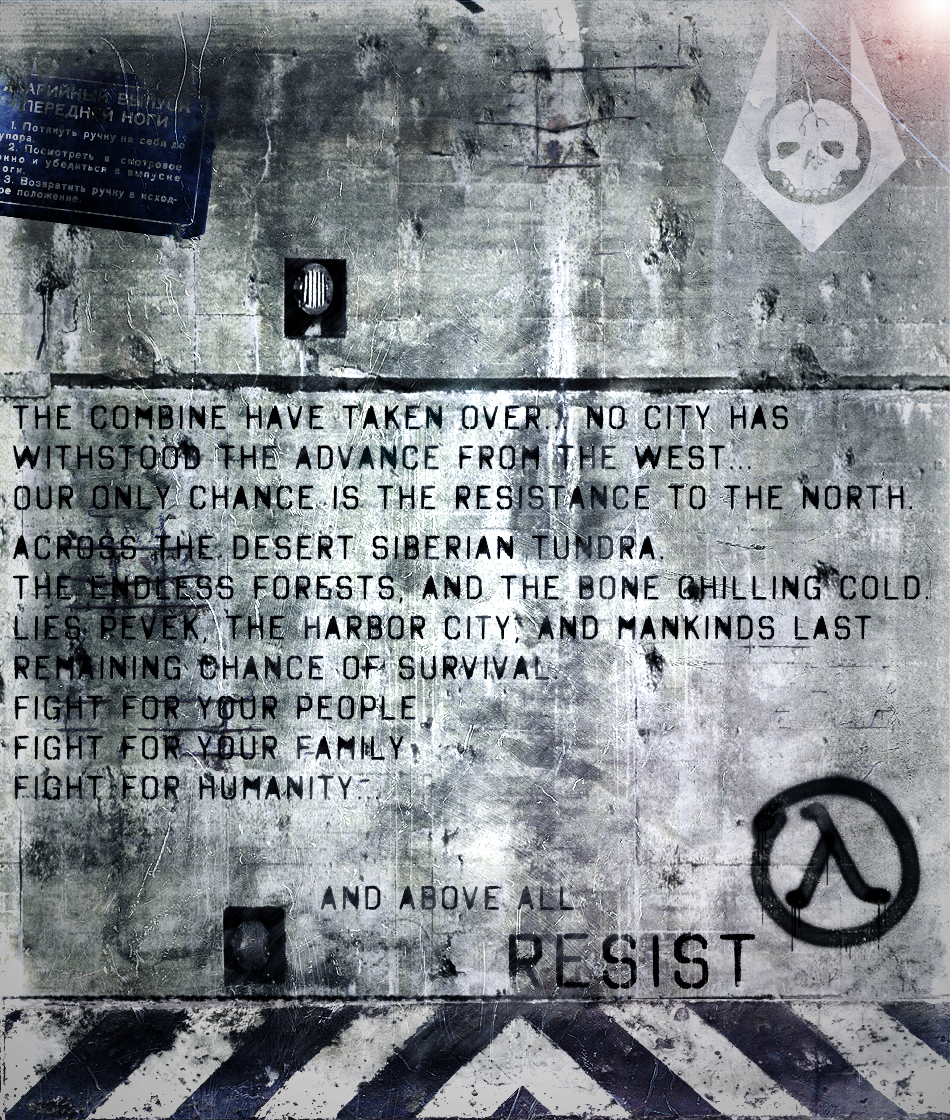 The Northern Resistance by TNR Dev Team is licensed under a Creative Commons Attribution-NonCommercial-NoDerivs 3.0 Unported License.
Based on a work at www.moddb.com.

Taste of what is in store (Story excerpt)

Here is a small taste of the very beginning of the story. what follows is a rough draft of the story "The Northern Resistance" Currently i am up to chapter 5, this is only the preface, and the first maybe 1/3 of chapter one. id like to get at least 10 chapters. but im finding it very easy to get off topic when writing. i have to proof read so much to make sure that im following my story line, as well as half life's story line. the story fits right into the universe, but keep in mind it is my more gruesome version. I didn't want to sugar coat it. so please leave some feed back


PREFACE
Ten years ago the apocalypse took place. It wasn't a meteor, it wasn’t famine or plague. It wasn’t how anyone would have predicted, not Nostradamus, nor the book of revelation. No, the end of mankind was brought about by a single man. When the portal storms began to hit in city 17, and the evacuation process began my family and I left our home in St. Petersburg to live with relatives far away, across the vast expanse of the russian wilderness and the siberian waste scattered with abandoned gulag camps, in the small dying city of Okhotsk. Surrounded on one side by water, and on the other by the frozen forests of the siberian waste the city stood far enough away that the combine advance took several months before actually reaching its borders. The small resistance force that prepared to fight was no match for the combine cruiser’s arsenal. Fully outfitted with an invasion force large enough to take over vast areas of planets, the combine cruisers were meant for one thing, war. The cruiser sat above the city for a few days before they invasion actually began, many people started to flee into the wastes and others into the water, others stayed behind hoping to be left alive similar to the occupied city 17. On the third day of the combine cruisers presence a voice came out from the ship, it instructed us not to resist, and to submit peacefully to the combine to avoid human loss. We surrendered and were invaded on the dawn of the fourth day. striders and combine swept the street evacuating homes, searching for freedom fighters, and anything they deemed to be illegal, ransacking and rapeing the quite town. Many people were killed even though they did not resist, and by the fifth day the city was completely occupied. They began building their structures and by the weeks end we were living in a clone of city 17, complete with a structure that linked to the cruiser similar to the citadel. It has been ten years since the 7 hour war, ten years of occupation, and oppression.


CHAPTER ONE
The gentle hum of the shield wall gave me chills as i walked past it. I was in line for food rations, and the day was growing old. I could see the parking lot to the gas station which caused my mind to flood with memories of times past. A combine APC rushed by with its alarm blaring causing the metro police to begin to push the food line along hurriedly. Confused i was pushed into a large man in front of me. His name was Viktor, this beast of a man came straight out of the harsh wastes to our east, He worked in the diamond mines and stood at least 6’ 7”. All of his years of hauling rubble and other heavy equipment had made him abnormally strong.He turned round to look at me, as if i had shoved him purposely, and with one motion i was back four feet, laying on a pile of people who were misfortunate enough to have been behind me when Viktor struck. The metro police chuckled as the show went on, for viktor was known for his hot headedness. he came and lifted me off the ground, and with a thick russian accent said “Do you not see well yobanya suka!?” somewhat dazed still I replied “no, but after looking at your face i wish i didn't zhopa.” he threw me to the ground, I rolled a bit then stopped. I jumped to my feet and readied myself to fight, Viktor approached with the intent to maim, but as soon as he drew his fist the metro police stunned him. He went down like a falling tree. I looked at the metro police with momentary appreciation, but was met with my own stun stick to the head. When i awoke i was in front of my home, being carried inside by two men. The door swung open and my wife ran out and embraced me. crying she said “I was afraid they were going to take you to the prison camps!” I coughed and said “they just gave me a good beating, nothing abnormal, everything is fine.” She replied saying “If you ever do this to me again i will leave you!” I wanted to explain what had happened but it was pointless, this was the third time i had been arrested for disturbing the peace as the metro police called it, and i'm sure there would be more. I expected to hear from the block administrator, he would conduct a behavioral assessment, luckily i had a good relationship with him, and have never had any problems with getting the all clear from his reviews.It was now dark, my wife was cleaning up the few dishes we still had from dinner, which consisted of dehydrated beef, and some form of paste that tasted like beans but who could really know. Our rooms intercom chimed in with the monotone overwatch message, “Individual, you are scheduled for behavioral assessment, administrative officials are en route to begin processing, please remain in your home with all members in plain sight, use of brute force authorized.” our door beeped as it unlocked, i was expecting to see the administrator that i knew, but to my surprise the man who had constantly given me passes was gone… “Against the wall citizens!” exclaimed the man, he wore a long black overcoat, tightly wrapped around him. he stood merely five foot tall, and was pale like the moon. This man clearly came from much higher up

I Navysealguy3 AKA Charles Sprague, will be working on finishing the written story, so that i can release it as an e-book or whatever you would like to...

Please do not vote for us, we haven't earned any form of award, nor have we had any steady progress.

This is the media release you have been waiting for, for 3 months.please enjoy and forgive us. we touch on the work we have been doing and our future...

Hello everyone, it has been a while. Here is the media release for June. We have a podcast along with a lot of other goodies. ENJOY

Yea, source isnt a viable engine for the kind of game I wanted, nor did I have the skills to complete any of what i wanted to do. Honestly there was a time when i had a small alpha build, and a team of like 8 or 9 people but its long lost haha. The idea lives on though, one day it may happen.

You still working on this?

the only part im working on currently is the story. once i finish my pc build, i'll start working again. plus source 2 is coming our way i may wait till its out

nice looking mod hope to see it done, it could be unique :)

yea one day it will be but not till i finish the story. i hope to gain some notoriety with how good it is

How's the development going? Is the S-LAR animated yet? You haventh posted since November...

THE SLAR HAS PARTIAL ANIMATIONS, NONE WERE READY TO REVEAL. I NO LONGER HAVE A TEAM TOGETHER THOUGH, IM WORKING ON WRITING THE STORY RN THOUGH! GLAD YOU ARE STILL INTERESTED SORRY WE DIED, BUT KNOW THAT ILL NEVER GIVE UP ON THIS IDEA

Hey if this never gets released do you think you can release all that you've made so far?
I very much like the look of that Combine Rifle.

if you are developing a mod, i can let you use the model if i can find it

Have you managed to find the model yet?
Also has it been animated and textured?

i forgot about this, umm i should have it at home ill ask my modeler if he still has it\

Ok I hope it's not deleted or anything.