I've recently cut down on this section of the mod page, to lessen the amount of unnecessary information. The 'Map Progress' counters were removed as a redundancy, and the 'News' section has been replaced by the new Dev Logs. Now only permanent information is shown here.

In Lament, you take the role of Michael Anderson, a researcher and archaeologist living in England, 1845. In the wake of a disastrous expedition, your childhood friend and fellow archaeologist, Johnathan Crawford, has grown distant and sullen. Research is slowly crawling to a standstill, and doubts are creeping into the darker parts of your mind. Plagued by nightmares of an unspeakable monster stalking the halls of an unfamiliar place, you contemplate throwing the years of fruitless searching away. Anything for some peace of mind... right?

"Lament" is my first custom story for Amnesia: The Dark Descent. It has served as a fantastic learning experience for me, and I fully intend to make it the best it can possibly be.

I'm trying to make the story as understandable as possible while keeping the required note-reading to a minimum. Notes are still there, of course, but they serve to add depth to world the player explores, not to explain the core story.
There's quite a wealth of new stuff included as well. New physics entities and particle systems, as well as modified enemies, critters, and materials. All of these are used to bring the world of Lament to life, and bring it to greater heights than was previously possible.

As a final note, this page will not be updated regularly, mostly because the world is cruel to high school students, but I do try to keep everyone updated on the mod's progress in my Dev Logs.

To start today's Dev Log, I'm happy to announce that it's currently Summer Break (and has been for the past three weeks), which means I have more time to procrastinate! I mean more time to work diligently! 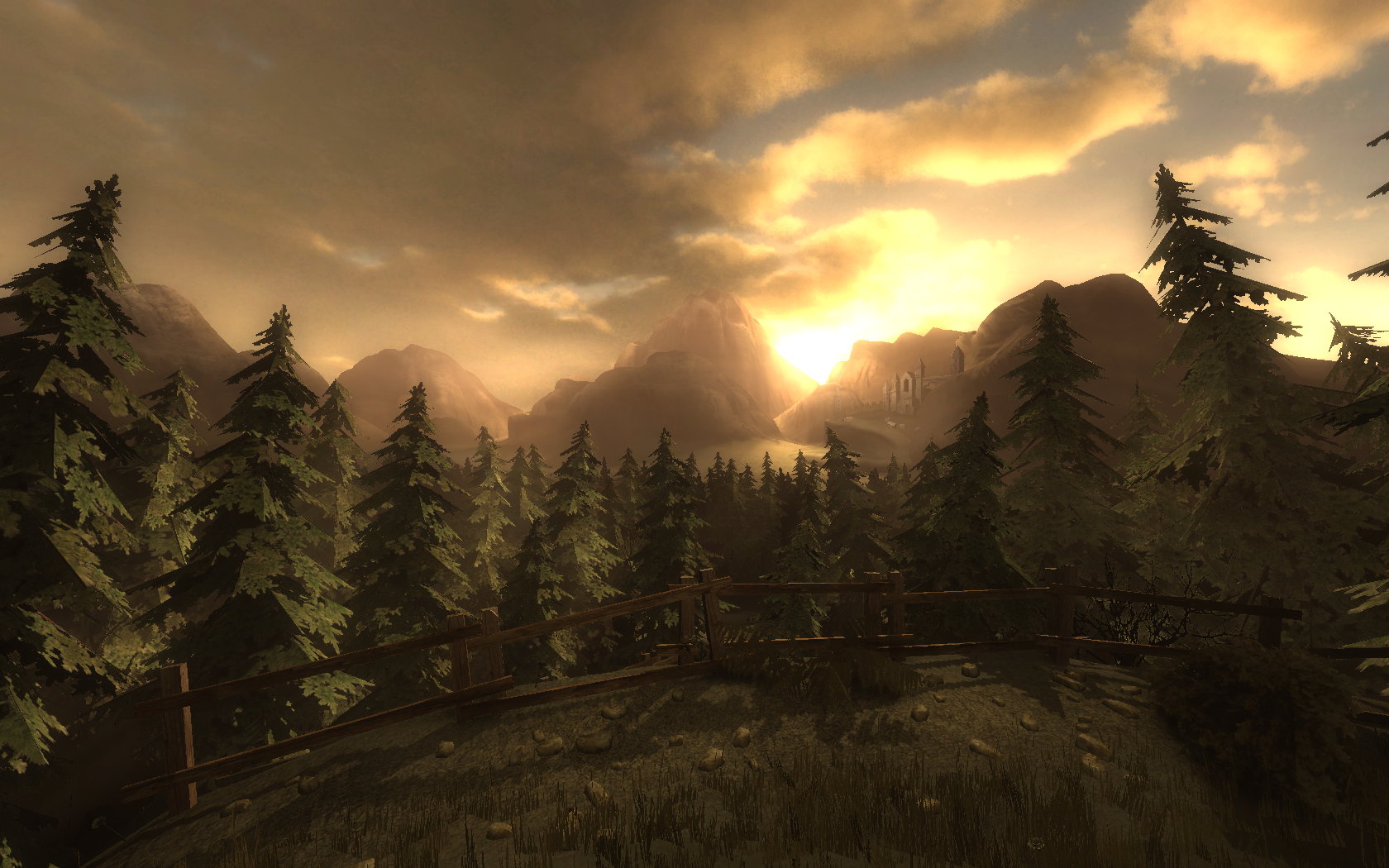 No gifs this time, but I do have some nice screenshots.

That level, in all it's majesty, is probably the largest thing that's ever been made in HPL2. I'm not saying that to toot my own horn (most of it's just decorative, anyway), I'm just saying there's no reason anyone would have wanted to build something so big that the game can't even render it by default.

Therein lies my dilemma. I want to include this level in the mod. Of course I do, I've spent days upon days on it alone. But doing so would require every single person who downloads it to manually change the game's settings to allow it to render at a further distance (the default limit is 400 meters, I've changed mine to 1200). Fortunately, changing this value doesn't have any effect on the game aside from letting it render farther out, but most people would be understandably hesitant to dig into the game's files and change a setting like that. 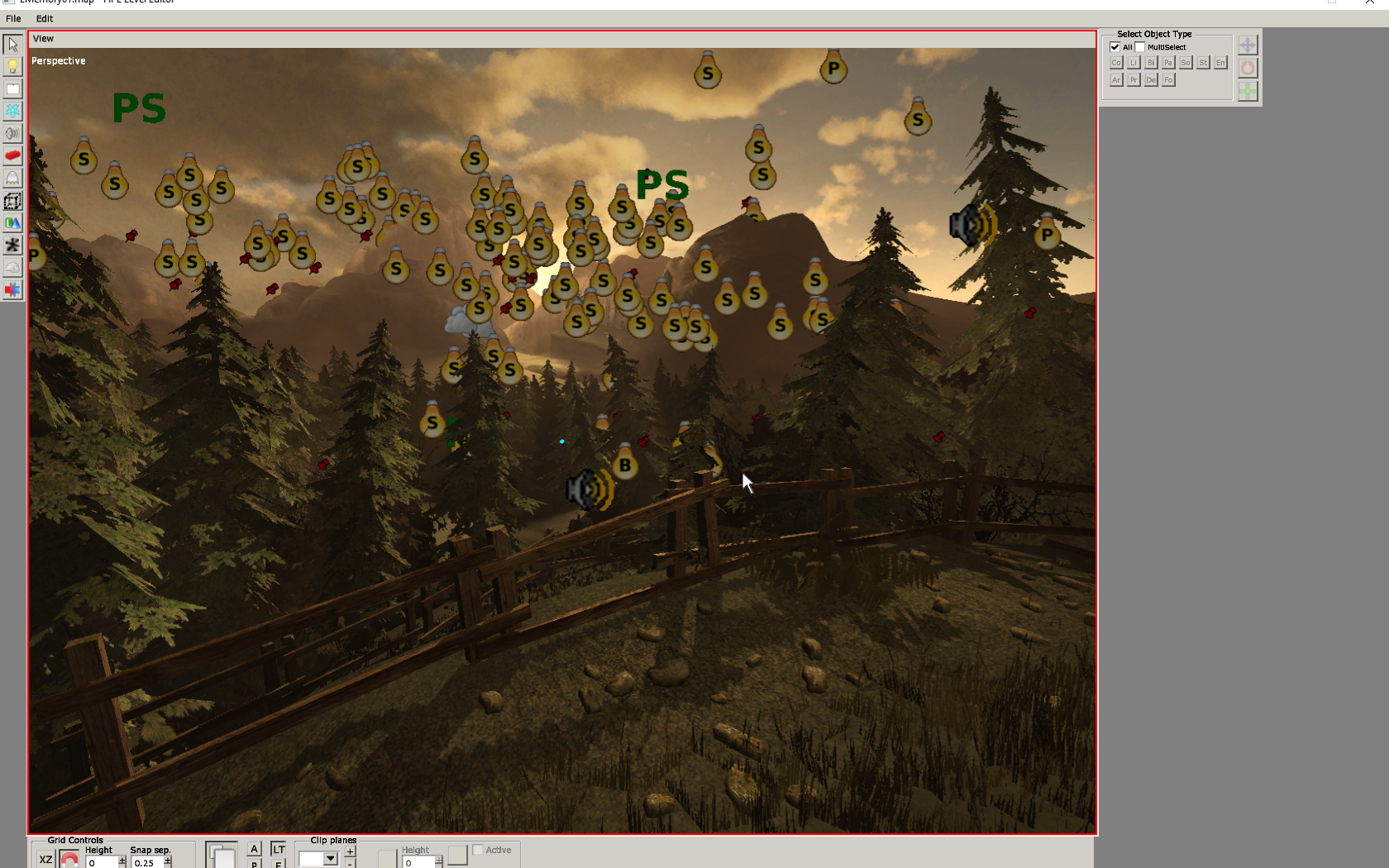 I have seen the true face of Hell. It is twelve dozen spotlights.

The other interesting thing about this level, aside from it's scale, is the way I've had to light it. Since lights start bugging out at radii above a value of 100, I've had to use gobo'd lights to fake the shape of the sunlight coming through the mountains. An interesting experience, to be certain, but an enjoyable one at that. A bit like making a painting. 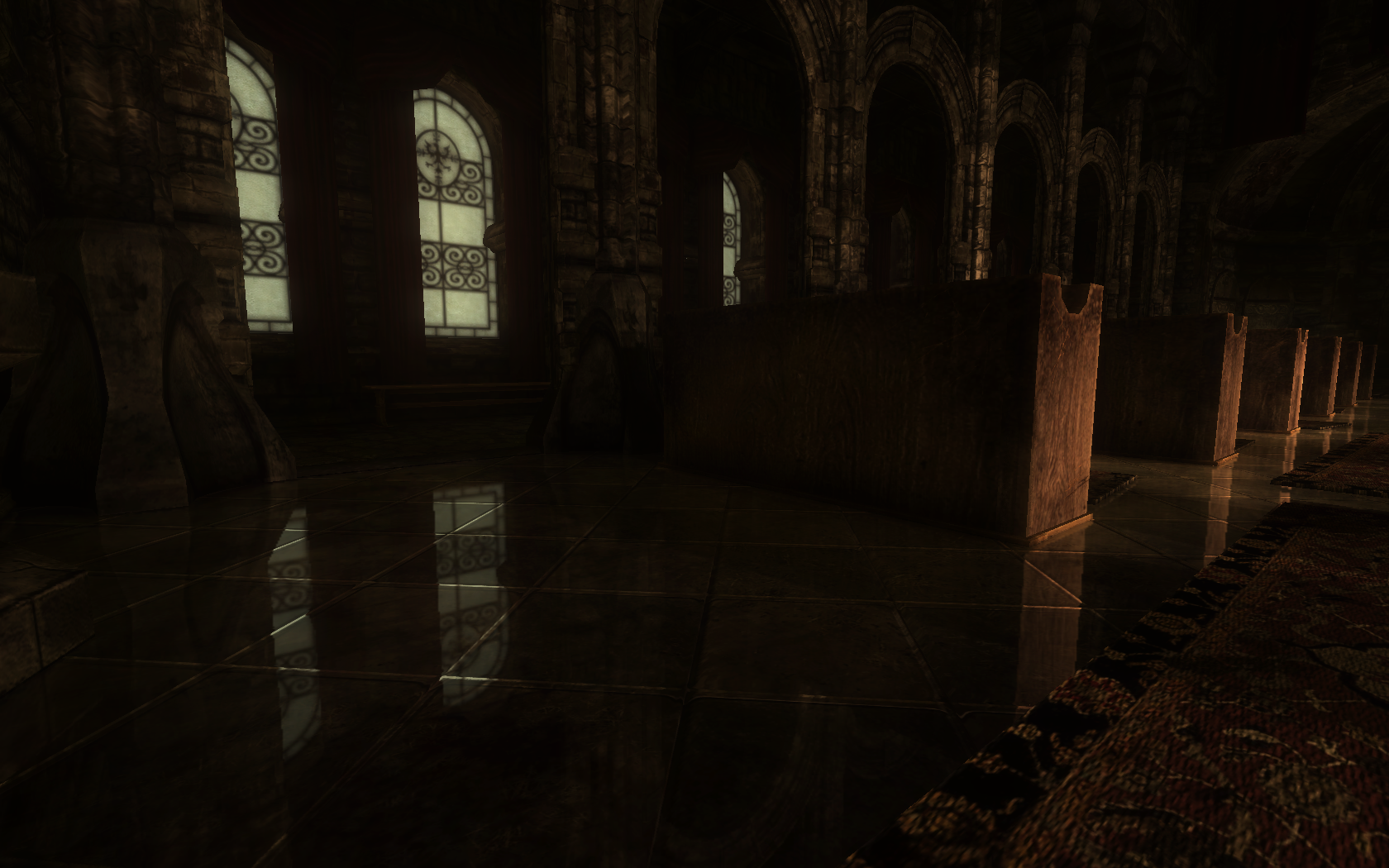 Can you believe this tile predates floor wax? I can't.

This bit is actually about something I figured out a long time ago, but never showed, and have never seen done anywhere else, so I'm showing it now. Reflective surfaces!

World reflection is pretty expensive rendering-wise, so it was important to get the materials to look normal whether the player had the effect turned on or off in their video settings. Fortunately, I ran into very few snags, and the system works very well. Basically, the game thinks it's rendering water, which is the only material that can have dynamic reflections. All I've done is fiddled with the settings so it looks natural, and then layered it on top of another textured plane.

Sadly, it's applications are still limited. Without being able to soften the reflection, it isn't possible to accurately simulate any materials outside of those that reflect light very sharply, like the polished floor in the screenshot above. That means wooden floors are out of the question, as well as most rough wet surfaces and metals. Still, it adds a lot to the scenes it can be applied to, and I'm glad it works as well as it does.

The last thing I want to mention is my current post-release plan for Lament. Mainly, that the short prequel and sequel I had planned (as mentioned a while ago in an article) will no longer be made. This is mostly because of the decline in Amnesia's modding community, but also because I haven't really thought of anything interesting that would make those custom stories worthwhile projects. This probably isn't much of a surprise to those who actually remember when I first made that announcement, but I felt it necessary to mention. Trilogies are overrated, anyway.

I do, however, have other projects to move on to from here. When I'll announce those, I don't know, but rest assured they will come.

That's all for today's Dev Log, I hope you enjoyed reading it, because I spent way too long writing it. Until next time.

I need more sleep, and all I got was these neat particle systems.

We got lighting! We got colors! We got... er, less trees!

Entities, What With the Physics and Such

Physics are cool, but school is not. *drops mic* *hastily picks it back up to check if it's broken*

Gonna be out of state for a month, will still work on my laptop, but it'll be slower than usual.

Ah, pray tell me, that this is not abandoned! For beautiful lighting, vast landscapes, tell me that this work of art would be finished? To experience what wonderfully terrifying encounters may there be in this mod, surely it wouldn't remain but a dream? O, the screenshots tell such a story, of mastery of this old and outdated engine, of pushing the HPL2 Level Editor to its furthest limits! Tell me, that I would see this finished within my lifetime...

When will this come out? It looks great!

How is the mod going? Looks so cool!

Is the mod still in development? Or is this just another of those long pauses you seem to take every so often?

hi,I'm very worried about this mod.He is a perfect.I would like to ask a couple of questions. Is it being developed? And if so, when the approximate date of release of the demo version?

Hey! How is the development going? :) Very excited for this mod!

It's still going, thank you for asking! I'm generally busy with other things but I find time to work on it when I can. Hopefully I can show some cool stuff in the near future.

Both of you guys are crazy, you and Reminiscity. Honestly, sometimes i forget about all of this being the result of years of experience and hellish labor, and just cry about how bad i am in terms of everything in comparison.

When Life No Longer Exists Amnesia: The Dark Descent