The Eagle and the Cross

THE WAR-TORN AMERICA IN 2024
"As their ancestors did in 1861, the Southerners rebelled against the federal government and seceded when they felt that America betrayed her Constitution in the second deacde of 21st century approving many controversial laws which were (according to them) unconstitutional: they limited the freedom of expression and gave much more power to the police forces, to the military and to the corporations itself. Also, almost two centuries of constant war and "world policing" wearied the people (expecially the southernerers) as they felt more and more restless and discouraged by the US government. Eventually, during the riots of 2017, Viriginia declared independence and soon after, every old southern state joined her in the reformed CSA. They lived in peace with their northern brothers for four years, also while the US were still fighting skirmishes around the world, not a single confederate soldier left the home soil thanks to a new isolationist politics approved by the Confederate government and well recieved by the other states. 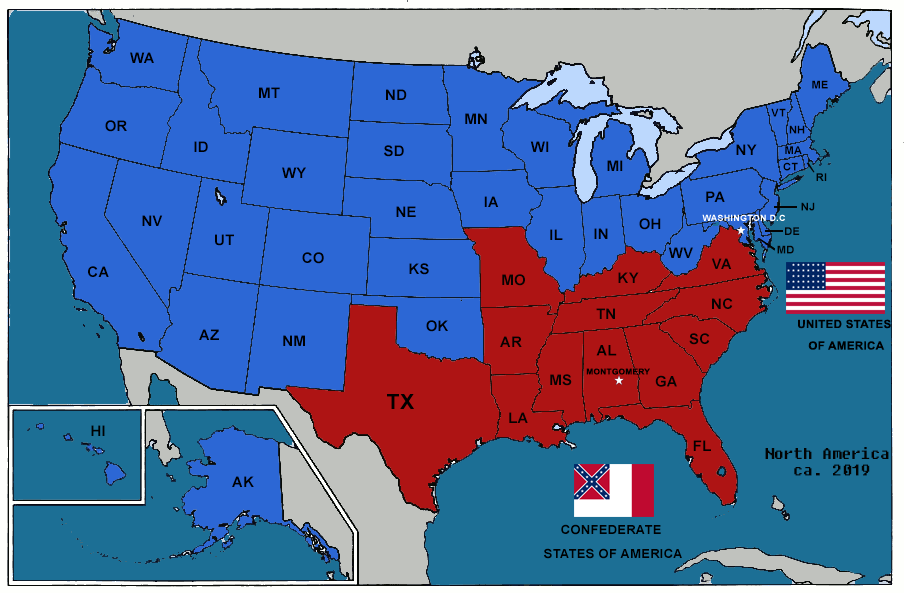 Then in 2020, an ultra-nationalist group of insurrectionists called "Childs of the Eagles" (whose fanatical view of a "New Way to Freedom" was backed by the military-industrial complex) overthrew all local governments in the Union with only a few states opposed a fiery and lasting resistence but eventually lost, resulting in refugees and military (many with their own assets) fleeing in the CSA or Canada.
- 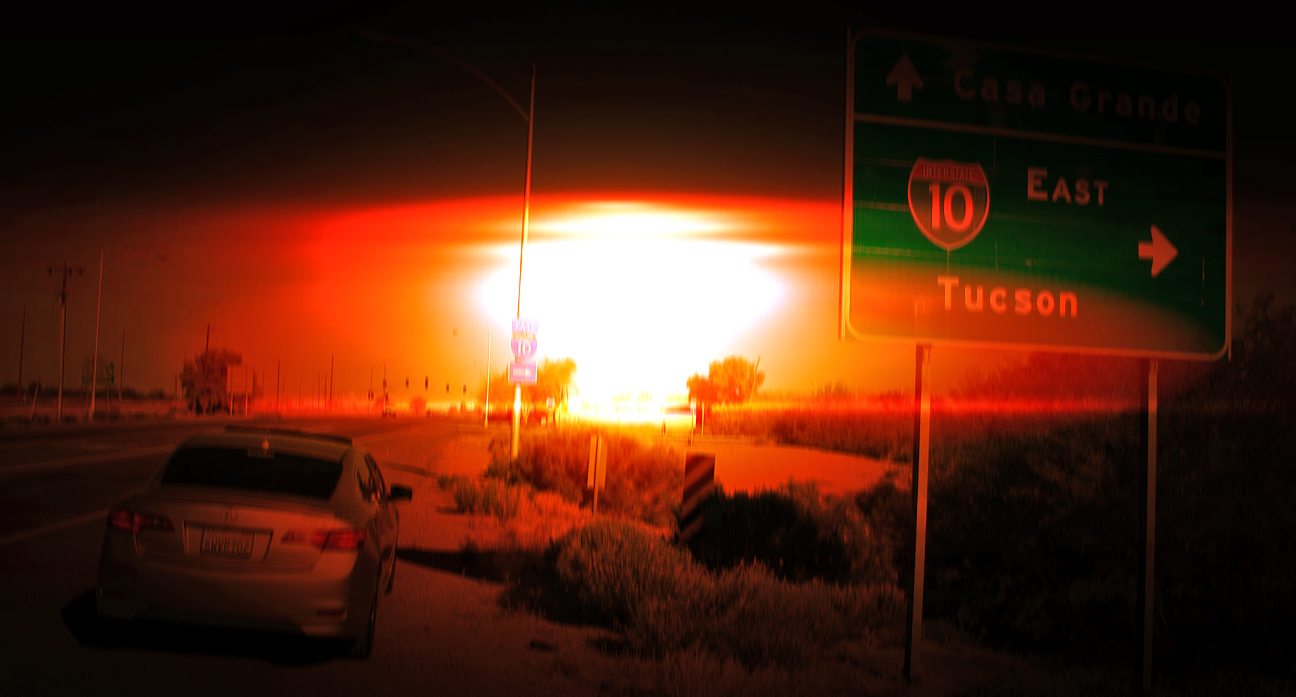 (Live footage of the nuclear bombing of Tucson the 13th November 2020. The Childs of the Eagles used nuclear weapons to stop the waves of refugees and diserters which were fleeing to Texas.)
-
Seeing this as high treason, the USA attacked the CSA starting the Second American Civil War in 25th March 2021. The year is now 2024 and three years have passed since the beginning of the war. Canada closed its borders and declared neutrality, the state of New York has been turned into an occupation zone by UN's peacekeepers while in its headquarter the members of the Security Council employ diplomacy doing their best to avoid a total war between the major powers whom had many economical interests in the now shattered union, although it didn't prevented to many foreigners to volunteer and join the war on both sides. The main theater of war is now along the south-western border of the USA where the CSA is making her way to California to cut out the main supply lines of the US Armed Forces. Now, on the blood of their ancestors and on the blood of their sons, their fight for the very right to exist as a sovereign nation goes on." 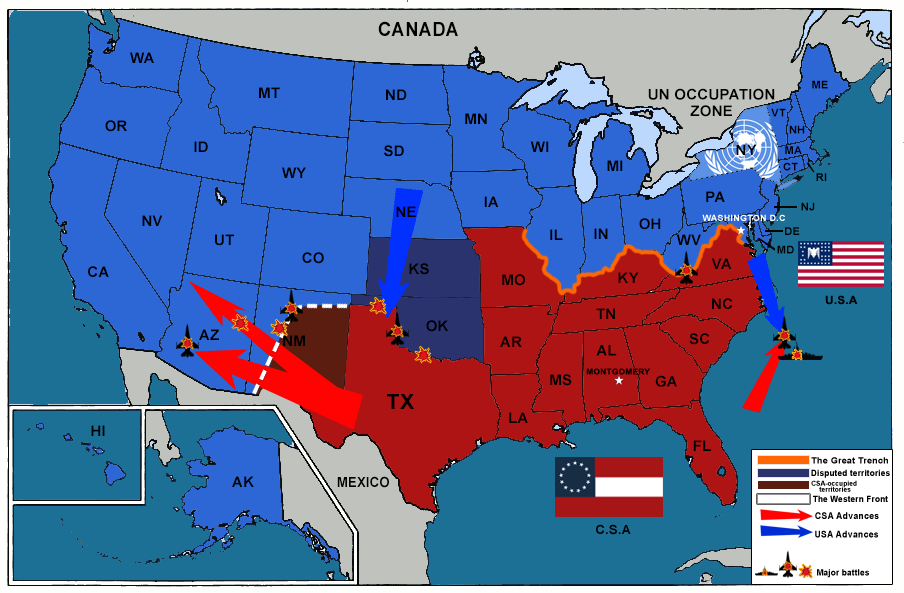 (everything in this mod was made exclusively by me, except future external contributions)
RSS Articles

Nothing is quiet anymore on the Western Front!

I know it's been a quite long time (heck, three months!) since last update, but many things happened which forced me to leave the mod team, putting this mod into a lenghty hiatus and leaving my faithful fellow RaptorGod working on it all alone. Fortunately, I managed to make short work of most of the personal problems I have (and had) so I'm officially back to work on this mod, for the moment not full-time unfortunately, and we'll once again try to give you and immersive and deep experience. Also, many question will be finally answered.

Who are the secretive men who started all of this and why?
Will the C.S. Army ever make her way up to the West Coast or they will be stuck in a tug-of-war along New Mexico-Arizona border?
How the UNPF will manage the ever increasing harrasements by the LSS (read "Paper Money")? And will they finally launch an offensive to crush both belligerents? 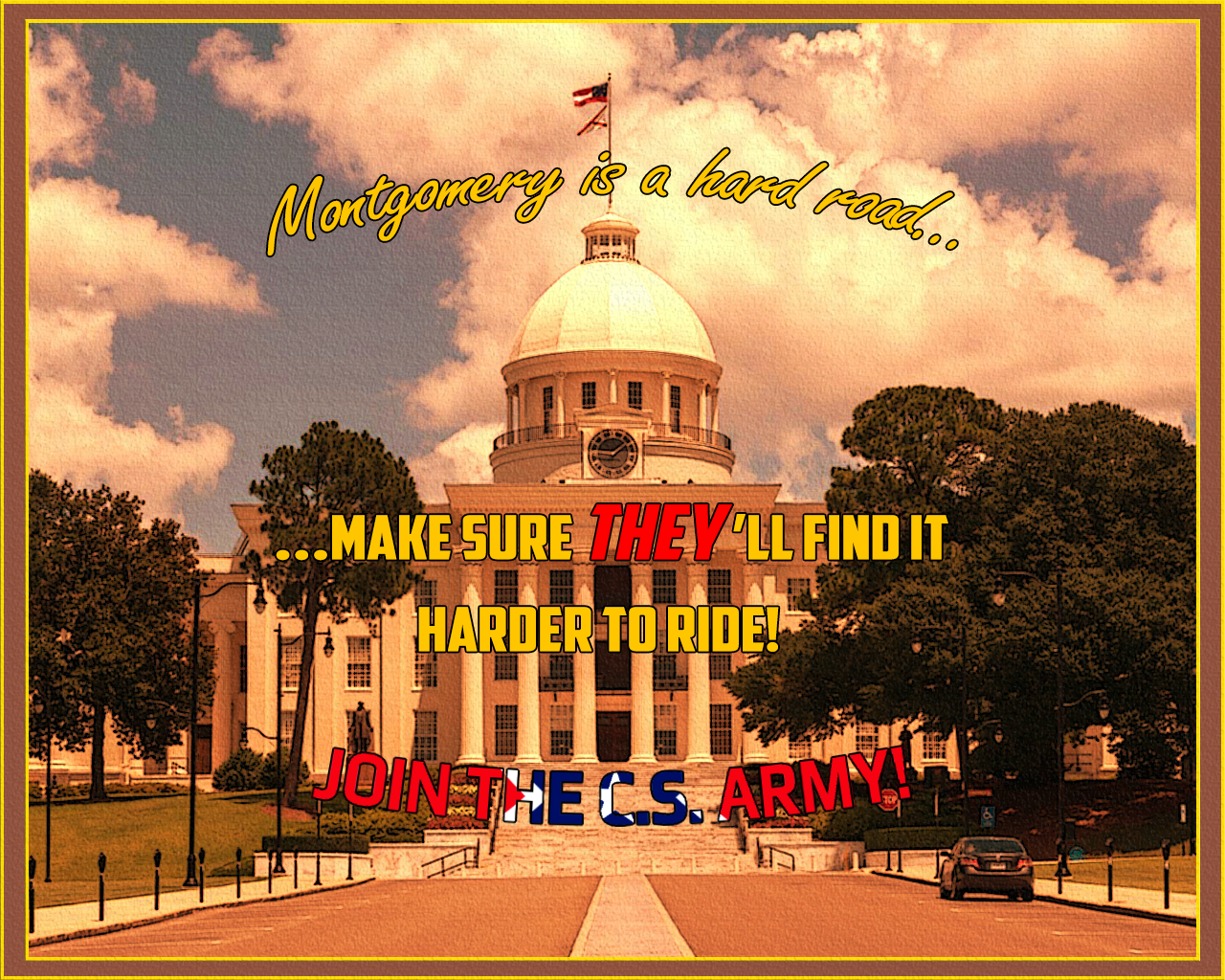 Be sure to PM me or RaptorGod if you're interested!

Hello again and welcome back! This time, we're presenting you two brand new factions: the techy ZTS (main sponsorship of the UNPF) and the LSS, a PMC...

Hello there, and sorry for the lack of updates but it was a very busy week. Now, we're (yes, "WE") ready to kick this mod into overdrive.

Hello, pilots! Last time we examined the CSAAF but now it's time to take a look at the two main factions. So, here they are.

A small description of the Confederate States Army Air Forces.

The Eagle and the Cross - F/A-22E Kestrel Pack

A pack that introduces the Southern Raptor, a real game changer.

The Eagle and the Cross - ZTS and LSS skin pack

A skin pack featuring the infamous LSS' Raptors squadron and the nimble and advanced UNPF's (ZTS) EF-2000 II and MiG-33SS.

The Eagle and the Cross - mini pack

The Eagle and the Cross - Main skin pack

"The tools of war may be changed, but the war never changes..."

Is this mod still alive?

And are any other superpowers involved in this conflict?

Unfortunately, the development of this mod died together with Vector Thrust. Also, we didn't get the help we needed when we started recruiting.

But still, if TS would ever come back with some new stuff for VT, then I'll gladly resume the development alongside my RaptorGod pal, but until that... sorry, in no way I'll ever waste my time for a lost cause :(

To anyone wondering when the next Article Update is coming out; don't worry, it's coming very soon. ;)

Remember: feel free to contribute to this mod! If you need the CSAAF roundel, well they're released with a Creativecommons.org licence. That means that you may redistribute and edit the contents of this upload for your own projects provided that you credit me and do not use it for commercial purposes ;)

If something like this comes to pass I'd count on quiet a few marine and army divisions siding with the people. The national guard, depends on the state. The navy and air force, probably not, the navy aught to be left alone and the air force wouldn't want to take any side as they love their toys. Can't blame them, they're so shiny.

An interesting point of view. Still, sooner or later, they would have to make a choice.

Inspiration for the CA was taken from shattered union? Looks like the same description.

"Shattered Union" is actually one of my favourite games ever.

It makes more sense that they'd use F/A-18 Super Hornet, F-15, or F-16 variants (or even F-35s) as those have been in production in some form or another for a while and there are loads of spare parts and air-frames out there.

We already planned to use the Hornets. We're just waiting TS to make them.

The Eagle and the Cross Mod Team

Single Player
Tags
Embed Buttons
Link to The Eagle and the Cross by selecting a button and using the embed code provided more...