Mod Information:
This mod seeks to provide a historically accurate experience for the player set in 311 A.D.

- Roman faction rosters have been completely overhauled with all new models, textures and units.
- Added many new auxiliary units for Rome across the world.
- Added new units for Sasanian Empire and Germanic factions.

Choose between 7 major factions, all historically based: 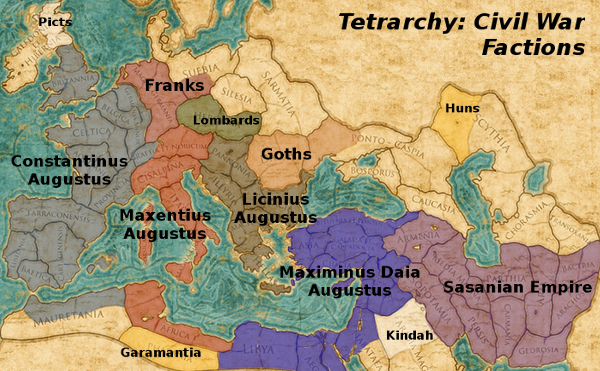 Flavius Constantinus Augustus (Constantine) - You have recently arose to the rank of Augustus by proclamation of your soldiers. When your father and former Augustus Constantintius Chlorus died suddenly in 306 A.D., you were the next logical choice to become Caesar under the replacement Western Augustus Severus. However, the Alamannic king Chrocus and your legions declared you Augustus without the approval of the senior Emperor, Galerius. After accepting the lesser title of Caesar from Galerius, you have recently rose to become one of four Augusti during this turbulent time following the death of Emperor Galerius in 311 A.D.

Marcus Maxentius Augustus (Maxentius) - You are a brazen usurper of the Augustus title, or so most of your contemporary Emperors see you. When Constantinus was proclaimed Augustus by his own troops in Britain during the summer of 306 A.D., you saw the path to power. The son of former Augustus Maximian, you were declared Emperor by the people of Rome when the other Emperors attempted to impose a tax on the ancient city. You have weathered the attacks of the now dead Severus Augustus' and Galerius Augustus' legions against your legitimacy to rise to power.

Gaius Licinius Augustus (Licinius) - You grew up the childhood friend of the recently deceased senior Emperor, Galerius. He tried to hold the Empire together in the manner of Diocletian, but his reign was fraught with conflict. Upon his death in 311 A.D., you took over his place and reached an agreement with Maximinius Daia to share the regions of the East. Although you are nominally the senior Emperor, your hold over the Empire is extremely precarious as tensions are rising between all four Emperors.

Gaius Maximinus Daia Augustus (Maximinus Daia) - You are a relative newcomer to the Imperial ranks, but your experience as a soldier makes you more than qualified to lead. Campaigns against the Sasanian Empire have proven your worth and Emperor Galerius adopted you in 305 A.D. Upon his death in 311 A.D., you divided the Eastern Empire with Licinius Augustus. While you may seem to be peaceful, you have plans for maneuvering into ultimate power.

Sasanian Empire - After the fall of the Arsacid (Parthian) Empire, Ardashir I founded the Sasanian Empire in its place. Although the empire started in traditionally eastern territories, it eventually expanded to challenge the Roman empire for control of the Eastern Mediterranean. During the Sasanian Empire's ascendancy, Persian culture reached new heights and flourished as the major power between India and the West.

The Franks - The Franks were a loose confederation of Germanic peoples who populated the area surrounding the Rhine river. Some tribes would regularly raid Roman territory, while others chose to join the Roman legions as soldiers. As their raids became more and more invasive, the Franks turned into a very real threat to Roman stability in the west.

The Goths - The Goths as a people were believed to originate from Scandinavia, although they ventured far into other territories. By the third century A.D., the Goths had crossed the lower Danube and begun to ravage various territories all the way to the Black Sea. Eventually, two of the Gothic branches, the Visigoths and Ostrogoths, would become major threats to Rome and lead to the fall of the Western Roman Empire.

The winners have been announced for Total War's first mod awards.
Congratulations to the winners & nominees, here's a taste of what you will be receiving.

Each trophy contains a genuine historic coin from the ages and cultures featured in the game.

Nominees and winners will also have a custom badge to display on their modDB profile, your profiles will be updated with these shortly.

It's been our pleasure to be involved in this historic event, lets hope more studios join in celebrating changing the game!

The full awards presentation can be seen here.

This version is compatible with patch 16.1 and the new DLC release.

This is the fully updated version of the mod for Patch 15 beta.

This is Tetrarchy: Civil Wars for Rome 2, updated to Rome 2 patch 9.1.

This is the full mod release, updated for the latest patches and with new content.

This mod would work great with Empire Divided as a base!

Hey, I'm really excited to play this mod, but I've been having an issue with the battles.

The game loads up perfectly, and so does the campaign map, yet whenever I load up into a battle, it CTDs.

I have Divide Et Impera saves, but I deactivated the mod (of course), so I'm not sure that'd actually conflict with the game.

Hey, is there a chance you will add the Slavs? Would be amazing to play as them in Rome II.

The timeframe of the mod is a little early for them, as they start making an impact around after 400 AD. It would still be awesome and era appropriate to have Slavs somewhere behind caucasus mountains, only to appear and migrate later on!

slavs were originally in south-western poland and east germany...
not anywhere near the caucasus mountains

That is simply untrue. Slavs migrated westwards to the areas that you speak of later on and settled there in several migratory waves, first of which begun as they were fleeing the huns not too far away from this era.

You may rethink your idea of "originally" as the origins of slavs have been and continue to be a matter of debate. It is generally accepted that they appeared beyond the caucasus mountains.

Hello, I have created the Arabian and Canaanite rosters for the TW: Age of Bronze modification on TWCenter.

If this mod is still active I am willing to make distinct Lakhmid, Kindah, and Ghassanid rosters for you.

I'm from Iraq myself I know a lot about pre-islamic Arab history and Near Eastern military in general I can offer you extensive research, illustrations and an entire roster complete with unit names translated into Arabic if you wish, I can even provide you with the unit names in the distinct Arabic dialects of each region the faction would be present in such as Ramah (Spearmen) for Kindah and Ramih for Ghassan.

I am able to do full DB editing work for these units.