Tanks and Rogues is a serverside modification for Quake III Arena with heavy focus on teamplay. The core idea of Tanks and Rogues is that everything is a team effort. To kill an enemy tank, first your rogue has to disable the enemy's shield, then before it regenerate, your tank must hit the enemy tank with conventional weapons to actually kill him. This creates a new kind of teamplay, a tight teamplay seldom seen in FPS games, a teamplay that requires you to focus as much on your teammates as on your enemies. For extra spice, Tanks and Rogues includes cool features as the Power Taunt and the Team Grenade. The former is an awesome explosion activated by capturing a Power Taunt item and then using the Quake III Arena 'gesture'-feature simultaneously with and in proximity to your teammates. The Team Grenade is a very powerful grenade that will only detonate if hit by a rogue's weapon. It is perfect for clearing out a room of campers but again requires delicate teamplay.

A new version of Tanks and Rogues has been released so that anyone can run their own servers of it. This new version brings new features, tweaks and bug fixes from the last one. 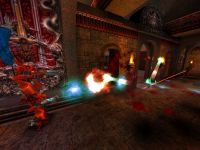 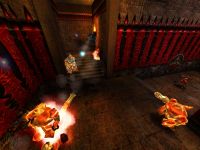 Tanks and Rogues is an novel form of intense teamplay where no task can be completed alone. The mod is implemented completely serverside so there is no download required to play it, just join a server with your regular Quake III Arena client. There's also awesome explosions triggered by team efforts.

In the new version there are no longer spawn waves. We felt the mechanic was too random and that wait times could become very long and frustrating. Now you will always be able to respawn a set time after your death. For tanks, this is 6 seconds, for rogues it's 3 seconds. The longer down time for tanks is to further reward teams for killing enemy tanks. 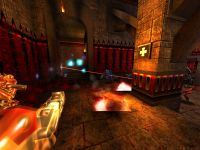 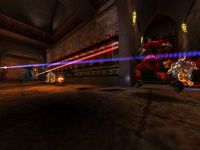 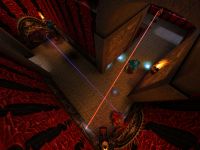 The other major change is that tanks no longer spawn at full killing power. They still have the Plasma Gun and infinite ammo for it but they no longer spawn with any rockets or Team Grenades. These more powerful ammunitions you have to get from your friend rogues, just like rogues have to go to their friend tanks to regenerate health. When you as a tank stand close to a friend rogue she will regenerate your rockets, 1 per second. You will hear a nice ammo click every time you get a rocket so that you know when you're in ammo range. Team Grenades are supplied in the same manner but with just 1 grenade each 15 seconds and a different more alarm-like sound accompanying it. You don't have to stay in range for the full 15 seconds. Even if you have been away from your rogue a long time, as long as 15 seconds have passed since your spawn or your last Team Grenade resupply you will get a new one as soon as you get in range.

Many strange bugs about the Power Taunt have been fixed and lot's of stuff have been tweaked. This is the best Tanks and Rogues yet and just like the versions before it, it is really really good.

To run your own server or to play locally against bots: download Tanks and Rogues 1.3.12.21 now.
To play it online, bring a couple of friends and join the official server at lockecole.ath.cx:27960
If your friends are a lazy bunch that won't try out new things with you, you can play with us and all the other TnR fans on Sundays 1900 GMT at the official server. I hope to see you there! 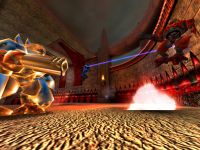 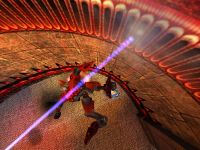 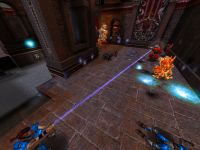 A new version has been released and the official server will be running a new configuration this week.

One week after the first release, here's the second one. It makes it easier to Power Taunt and fixes a bunch of small bugs.

Want to play Tanks and Rogues but can never find 3 friends to play with? Don't worry, on Sunday, we will all play together!

Official public servers are running, videos are available for watching and files are ready for you if you want to run your own server.

Here's new feedback features, a tweak of the score system and more.

New major changes to the gameplay, lot's of tweaks and important bugs fixed.

A the end of a recent thread me and Hyzenthly found a bug that could make it impossible for you to start the game. If g_doWarmup was set to 0 in your...

The Power Taunt cue has been updated and many bugs have been squashed. Download to play against bots or run your own server.

This is the second release of Tanks and Rogues. Aside from fixed bugs it contains a new help text to help players time the Power Taunt.

This is the first public release of Tanks and Rogues, a Quake III Arena serverside modification. It should work for all platforms on which you can run...

My server is down. That means the forums will be offline and my TnR-server will be offline. You can still download the files from here and run your own though, so it shouldn't matter.

Does this mod have Bot support?

Yes, xDliverancex. Some effort have been put into the bots understanding the game. They work fairly well but is of course no replacement for real human competition.

Oh, sorry. I didn't see that Lazy had already replied. :)

Yes it does. The bots are updated to understand the basic game mechanics in TnR.

Here's an easy way to find Tanks and Rogues servers of any version.
[url]http://www.game-monitor.com/search.php?vars=gamename=TnR*&game=quake3[/url]

Multiplayer
Tags
Embed Buttons
Link to Tanks and Rogues by selecting a button and using the embed code provided more...