Got some nice Christmas presents? We might be a bit late but we've another one for you. ;)

But first we would like to thank YOU for your ongoing support! Thanks to all of you we made it into the Top 100 of all Mods on ModDB once again. :)

We all love the Asgard so we toyed around with ideas for new ships for them a lot in the past. But as you know we want to stay as close to the series as possible and there was not really a need for more Asgard ships as they are part of the Tau'ri faction. So we didn't created more ships. 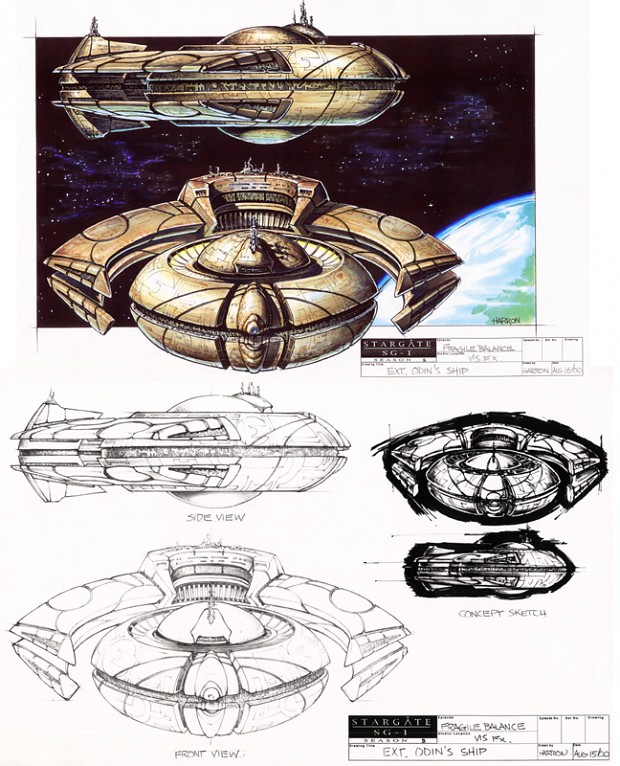 An official artwork of a new Asgard ship that was planned to appear in SG-1 Season 7 to introduce a new Asgard character named Odin. This was rejected by the producers, so we never catch sight of this ship in the series.

Alpha Omega Protocol modelled this ship and offered it to us, but without texture. As we focused to release the space skirmish part at this point of time we didn't want to spend resources on it.
However...our 2D artists love the Asgard too! To get his head free from the work on the GCs and ground Imperial created the texture for this vessel.

Watch the video to see it in action for the first time:

This ship named Sleipnir was once the flagship of Odin the Chairman of the High Council of the Asgard. It is almost twice as large as the O'Neill class. The Sleipnir was the prototype of a new class of battleships. It was built in the final stages of the Replicator War and should then be used against the Ori. To fulfil this purpose, the ship has a new vector shield system, advanced sensors,3 Asgard beam weapons, 4 medium and 2 heavy ion cannons. Also the hull is coated with a special Trinium-Carbon-Compound. Due to malfunctions, the ship had to be abandoned shortly before the exodus and therefore never went into mass production. Finally the Tau'ri explored it abandoned, drifting in the void between the Milky Way and Ida Galaxy. Using the knowledge of the Asgard they could reactivate and almost completely repair the ship. Although the Sleipnir only runs at 80% of its maximum power, this gigantic ship is a flying fortress.

Please note: The creation of the ship doesn't mean that we will build the Asgard up to another playable faction. However it will be a nice addition to our project and it will have its first fly on a special map with the Sleipnir as its main goal.
Both will be released early next year.

I am suddenly reminded of this: Youtu.be

But yeah this is awesome guys. Can't wait to play around with it :D

I like that! :D
Hopefully you can do that soon. ;)

does that mean the campaign will be done early 2015 or just the new ship and the map? Out of curiosity is the new ship close to the size of the the ZPM powered Hive ship? By the way great job on the entire mod so far!

The new ship and it's map will be released early 2015. The GCs and the Ground part need more time to complete.
The ZPM hive is bigger but Odins ship is larger than any other Asgard vessel.

A few years ago i came upon a ton of concept arts for Star Gate, all original(it's not fan art) i've been keeping it all these years for no reason. There is art for weapons, ships, sets, props, characters and many more...so if you guys want, i can put it into a rar file and upload to mediafile or somewhere, maybe it could be of help to the mod...

Was there any Tau'ri or Wraith concept ships?

Sounds quite interesting. Please go ahead, I'd love to look through those.

That was meant for the Stargate team but ohh well, if you are interested, here you go :P

It was a bit too troublesome to upload onto ModDB so i chose Mediafire :P

Oh, thank you Sanguinius.
These concepts are interesting.

We collected many artworks over the years but it would be great to check if there is something new in your collection. :)

Anyone have any ideas?