StarCry is a single player mod started in 2007 for the game Crysis with numerous references of science fiction well-known of the players. Explore new worlds and fight the threat of our planet!

Things you need to know about the mod

- It is not based on the stargate franchise, even if some models have a similar design (the main character is a SG fan). Maybe it is a prequel to Crysis 1, a dream, or you are connected to the alien's matrix ? You will see ! 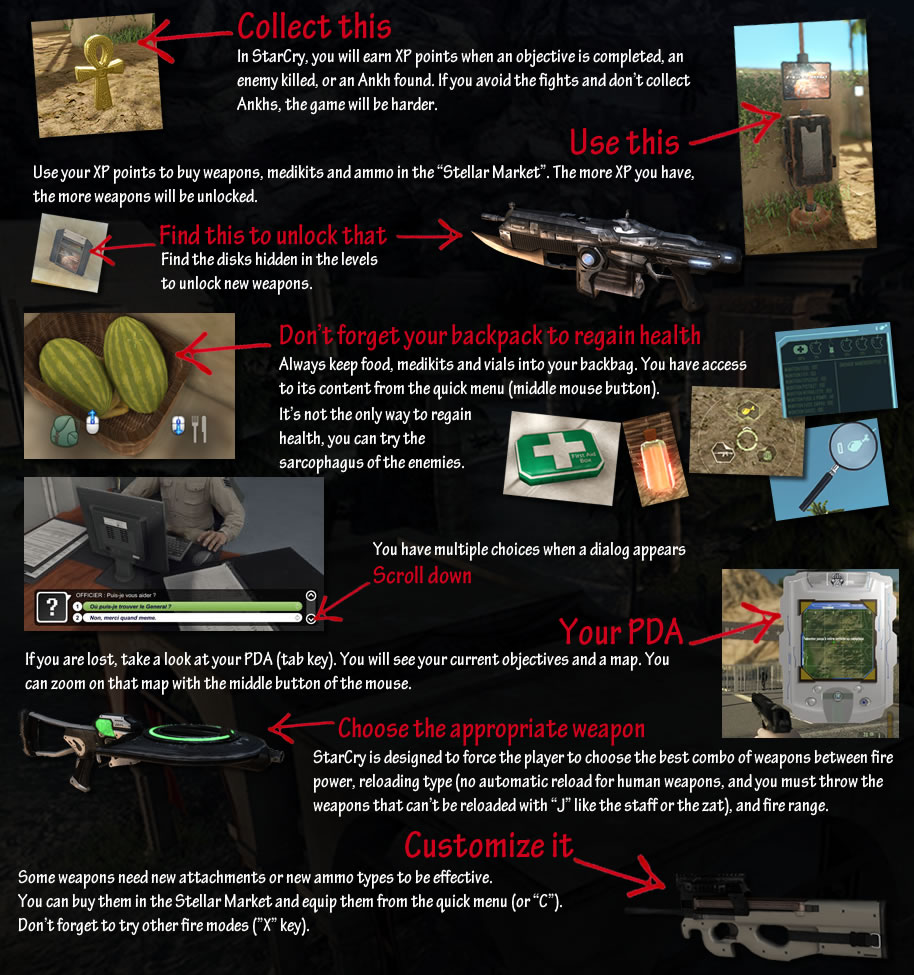 - The vehicles are not easy to drive, because this is an alien technology or an heavily armoured tank. No first person view for the human Centaur : there are many reasons !
- Don't let the enemies regrouping themselves. Kill them one by one. Headshots and Feetshots are effective.
- It's not an open world, you can't lose yourself. If you're going away from the action, you will be killed by snipers, eaten by crocodiles, frozen, dehydrated ...
- The mod is made to be played many times ! You can't unlock everything the first time. There is a few secondary objectives, and you can save peoples that have been killed the first time you played StarCry.
- No voices, only subtitles. If you are a talented voice actor from the usa, contact us.
- You will have a lot of bugs (visual & scripts) if you cannot run the mod in high or very high detail settings with more than 30fps (use our benchmark tool). Less than 30fps = risk of blocked scripts and physic problems. Same problem if your framerate is limited by capture softwares like FRAPS or with a command line. We noticed that the controls of vehicules are affected by framerate too. It's an issue from crysis.

You must have crysis : STEAM version, or BOX version with 1.21 patch. ORIGIN version is not always patched ! 64bit support of the mod is beta (use the default 32bit launcher if you can).

How to install the mod (french version)

Release of StarCry, a sci-fi mod for Crysis !

After more than four years of development, we are proud to announce the official release of StarCry !

More than 1000 new objects, 2000 textures, 20 weapons and 1000 lines of dialog were added to the base game to offer a brand new adventure. We estimate around 8 hours of gameplay for a first playthrough. The mod contains many references to famous science-fiction universes (movies, TV shows, video games -famous or canceled-...) alongside original creations, while still having a coherent storyline.

We have prepared instructions (install instructions and default controls) both in English and in French in the archive.

We hope you will enjoy playing StarCry. Have fun !

Hey guys, it's been awhile. If you played this mod 4 years ago and liked it or bought Crysis recently and are looking for an original mod, StarCry is...

We'd like to update everyone about the progress of the mod since the beta phase that began earlier this year.

The registrations for the closed solo beta of StarCry are open. Fill this form and maybe you will be selected to help us during the finalization stage.

Here's a quick recap of screenshots we've published individually in the past weeks.

StarCry is a single player mod started in 2007 for the game Crysis with numerous references of science fiction well-known of the players. Explore new...

Is there a completed walk through or longplay of this mod anywhere? Thanks!

Hello, SirMick! I still play your mod and have a lof of fun, it's really such a great work! I want to ask You, maybe You can share your fg nodes or some Flash works with other modders? Your file "StarCry Source files for modders v1" is truly helpful! I know, now just a few people work with CE2, but You can help us to improve our knowledge and make other mods more interesting. Thank You a lot!
Best wishes, Dima

Is this thread still alive in 2019? I'm playing the mod and loving it,very nicely done, I can tell a lot of work went into it, it's a real shame the was no voice acting, I try to keep up with the subtitles but they go by so fast, is there any way to slow them down? Any if you see this you I would be happy to lend my talented American voice to the game maybe even help find others who would be willing to volunteer their voices, please let me know.
Thanks

hey man i'm using a xbox 360 controller and the right analog stick stops working once i get into the cheyenne mountain complex, how do i fix this ?

Controllers are not supported. You need a keyboard and a mouse to play this mod.

Awesome mod brother,like many ive been waiting for a Stargate mod to actually work properly.Im still at the early stages and give it a 9/10 for fun and content.A small con-I keep feeling im hanging out for some NPC company,maybe a future update might be done with some voice acting.I would put my hand up for a try out for that.Just a thought.

I never found anybody without a strange accent to work on the voice acting (~1000 lines of text) and help to make the dialogs more natural, like native US speakers. But, nintendo/rare games don't have voice acting and it's ok most of the time... SG inspiraton is only a little part.
Don't forget the walkthrough videos if you're stuck.

Okay..so.. i've the steam version crysis game..i followed the steps.. but..not..working..black screen, and appcrash when i start the mod..i tryed the dx9 mod, but nothing..
SirMick! what do you think? can you help me for the problem? (sorry for the wrong english languange :( )

so.. i fixed the crash problem, open the game..the background is black.. ..when i create the new game begin the default crysis game....

Bad install of the mod, conflict with other mods or not launched directly from steam. Check that video : Youtube.com

Special thanks to Mick & Dark_Wolf for this amazing work. This is in fact the most incredible modification of the game Crysis. The true potential of the Engine is revealed when we see how these two great developers have a very close attention to detail. Finally, we enjoy a spectacular Sci-Fi gameplay caught between action and adventure.
All the best, T.C