Spook Town is an upcoming L4D2 campaign that will let you fight through several highly detailed blocks of urban zombie infestation, with a few special easter eggs included.

Spook Town will span across three maps in total. All three are being crafted only by me, so this is mostly a solo project. The first map is playable from start to finish, has been playtested/improved dozens of times, and is about 95% complete. The second map is coming along very well and is also playable. The third (finale) map is still in its planning stages.

Something isn't right about Spook Town

Progress:
Spook Town is coming along pretty smoothly. The first map is basically done, save some final polishing and scripting. I want to make Spook Town fairly challenging, and so far it seems to be. This map is a dick to everyone!

The second map is under heavy development. I hope to make it playable from start to finish within 1-2 months. For now, I'll just keep working on it daily and see if I can give my playtesters a map that they haven't already run through 100 times. Here's an early screenshot of the second map for now: 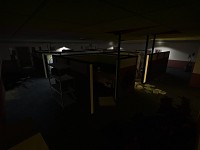 Strange Sightings:
Zombies and tanks aside, something feels a little off about Spook Town. I swear I've been catching glimpses of things out of the corner of my eyes while playing this campaign. If you ever see something that's out of place or doesn't appear right during your stay in Spook Town, it's probably best to ignore it. If that's not working, it would be wise to just leave that area! 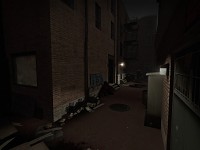 Modeler/Skinner Request:
A few custom models here and there are not necessary to get Spook Town released, but the alternative is me having to cheat and carefully craft out a few specific objects with lame ass brushes. I'd rather focus on the mapping side right now instead of getting bogged down with learning how to model for source, so if anyone out there is a bad enough dude to lend some aid it would help tremendously. Hell, I'll even be your friend!

Thanks for looking at my big silly videogame thing! Post some comments and let me know what you think. Until then, later broski!

Nice screens but it somehow misses a bit colour it all looks almost the same.. So grey. Perhaps add a slight fog or maybe some fires or something similiar in the same calour a fire has not sure.

There are a few fires in the map. Before color correction the map did have more color but felt too unfocused because of all the different hues everywhere.