This is a (skirmish) mod created with the intention to bring the feeling of the Lord of the Rings & Hobbit movies into the old RTS game Battle for Middle Earth II, and add "realism" through new models and severe re-balancing of the entire game! Our forum can be found here. Beta 4.5 was released in Nov 2007. New version, "Director's Cut" is under development...

/Nazgûl of The 3rd Age Forums

When the Necromancer orders Azog back to Dol Guldur, Bolg resumes the hunt for the Company of Thorin Oakenshield. Azog and Bolg lead the armies of hell across the lands of the north and into battle against the free peoples of Middle-earth. Bolg’s sculpt was created by Nazgûl, and has been seen before in the concept art of The Battle for Middle-earth III (view an earlier news article about BfME III). Bolg is the last of the heroes of The Misty Mountain faction of the Special Extended Edition, Director’s Cut. Our first article of 2016 will detail his involvement in the story and in the game. 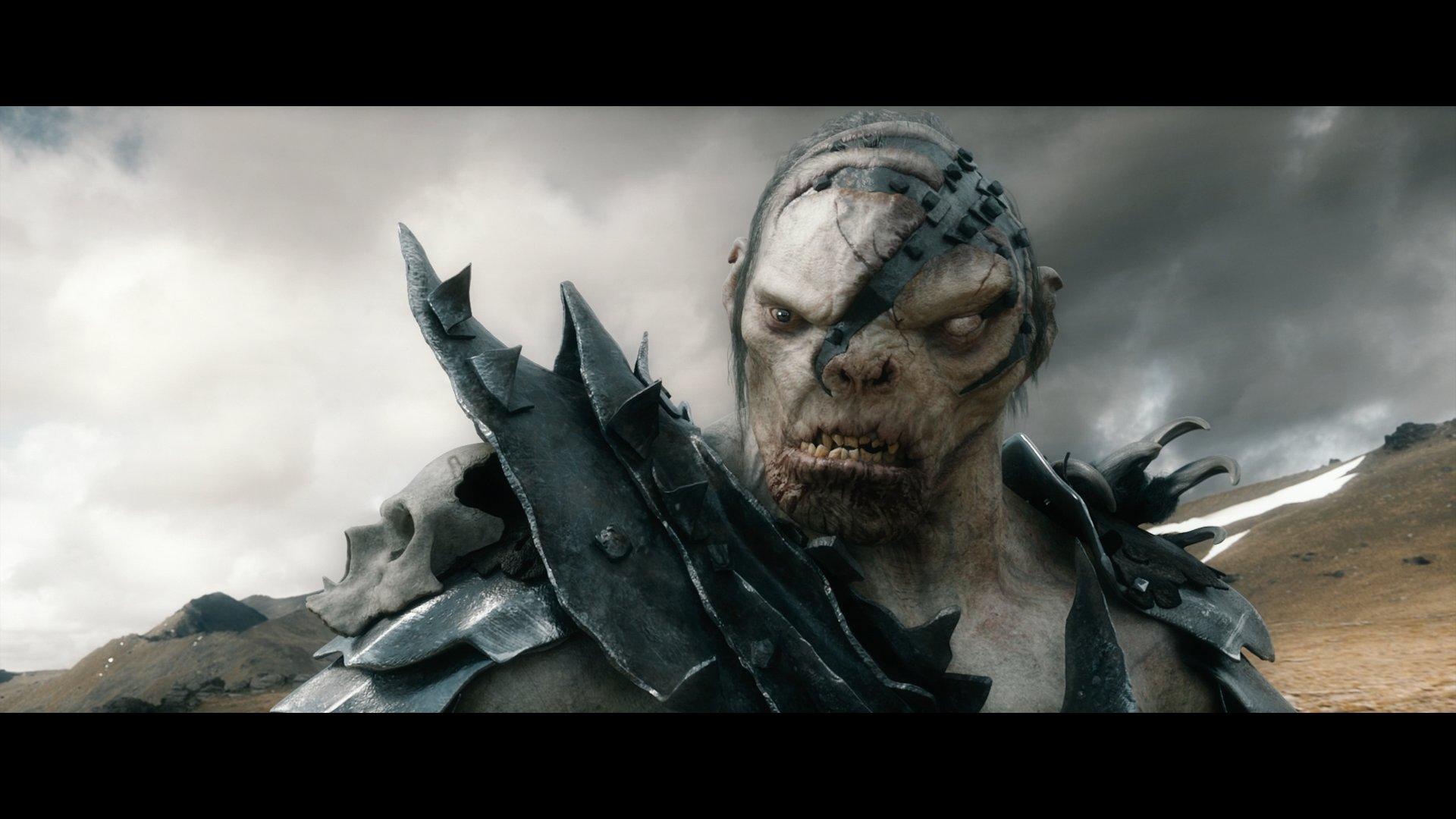 Bolg was the Castellan of Mount Gundabad and son of Azog (read more about Azog). Slain by Legolas in The Battle of The Five Armies*, Bolg returns to the battle in S.E.E. Director's Cut to destroy his hated foes, the Dwarves and Elves of Middle-earth.

Strong of body and of will, Bolg can switch between Morgul bow and his menacing, self-forged mace. He can summon his ash coloured Warg to lead the mounted Hunter Orcs over the vast terrains of Rhovanion. As a hero, and due to the basic balance changes in S.E.E. Director’s Cut, he is unable to take down an entire army by himself; however strong he may be as a hero. Rather, and much like the lesser heroes, he inspires the wild armies beneath him to fight harder, increasing attack and defence. He is a natural leader, second only to Azog’s command, with strong powers and buffs that will change the course of the battle against the free peoples of Middle Earth.

The Misty Mountain heroes are listed as:

If you have your own suggestions for the Misty Mountain faction of The Special Extended Edition, Director’s Cut, please post them in our forums at T3A, Revora. Alternatively, you can comment your suggestions here. 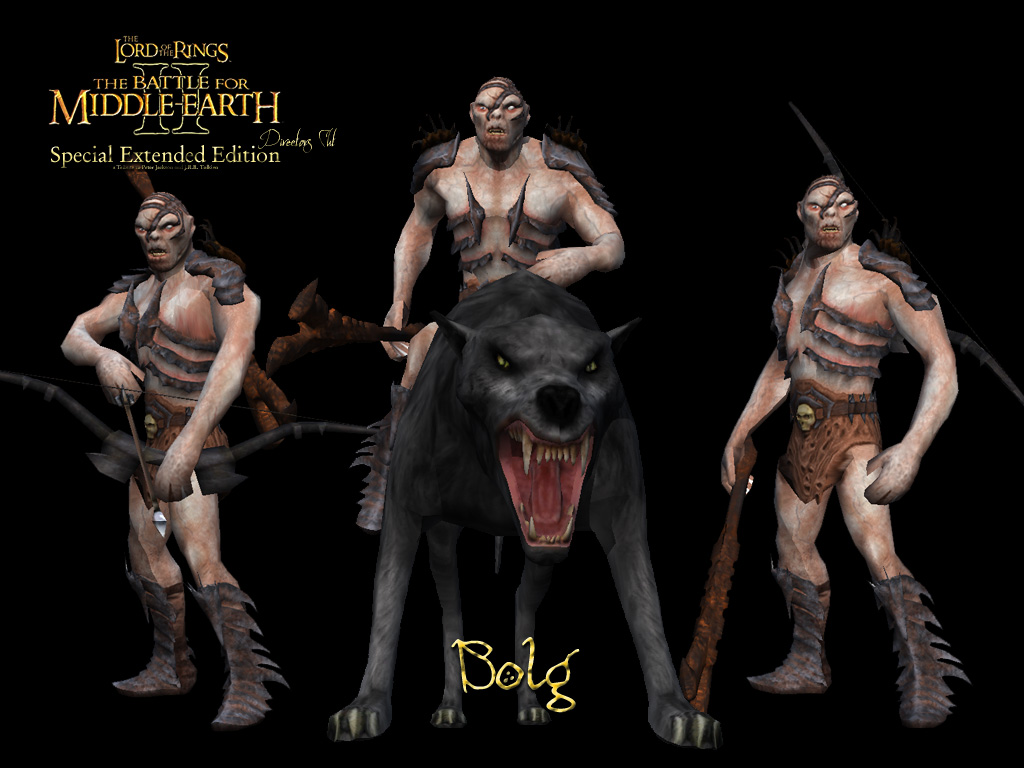 He carries out Azog’s will, and Bolg too wants the blood of Durin’s line destroyed. However, seeking to become more than just the spawn of his father, Bolg's ritualistic self-mutilation involved torturous metal plates, embedded into his body. Under his armour, deep, infected wounds scar his lacerated pale skin. Muscle and metal are one.

As part of the second hunt for Thorin, Bolg tracked the dwarves to the hidden wood-elf kingdom. The Hunter Orcs were unable to breach the great bridge and door of the Woodland Realm. Knowing partially of the wood-elf’s dealings with Lake Town, Bolg sent his hunters to find a second entrance, one in which the guard was less. The reward was swift in arriving; the Hunter Orcs found the Dwarven barrel-riders trapped within the water gate. A Morgul laced arrow hit Kili, of the royal family and cousin to Thorin, and slowly poisoned his body, later to incapacitate him. At this moment, the prince and captain of the guard of the Woodland Realm arrived and attempted to rescue the Dwarves from their immediate capture by the Hunter Orcs.

Bolg’s forces suffered great losses from the two elves, but continued to track their quarry. On their northern Wargs and under the cover of night, the Hunters rode into Lake Town. The stealth siege of Bard’s house went awry with the second, timely arrival of the elvish prince and she-elf captain.

Berated and humiliated by Azog, in front of the forces of Dol Guldur, Bolg is given a new mission and is sent to Gundabad.

The battle is going well for Azog. Evil times have brought about loses to his enemies before he joins the fray. As Bolg, the commander of reinforcements from Gundabad arrive at Raven Hill, the Battle of the Five Armies takes another turn in favour of the forces of hell. The reinforcements consist of Gundabad Orcs, giant bats, High Pass goblin mercenaries and Bolg’s own, personal bodyguard of elites.

From there however, the armies of good won the battle in spite of mounting odds and the loss of the King of Erebor and his two cousins. Not until later in the War of the Ring, would the northern tribes of goblins and orcs of the Misty Mountains and Dol Guldur, rise again to besiege the Elves and Dwarves. 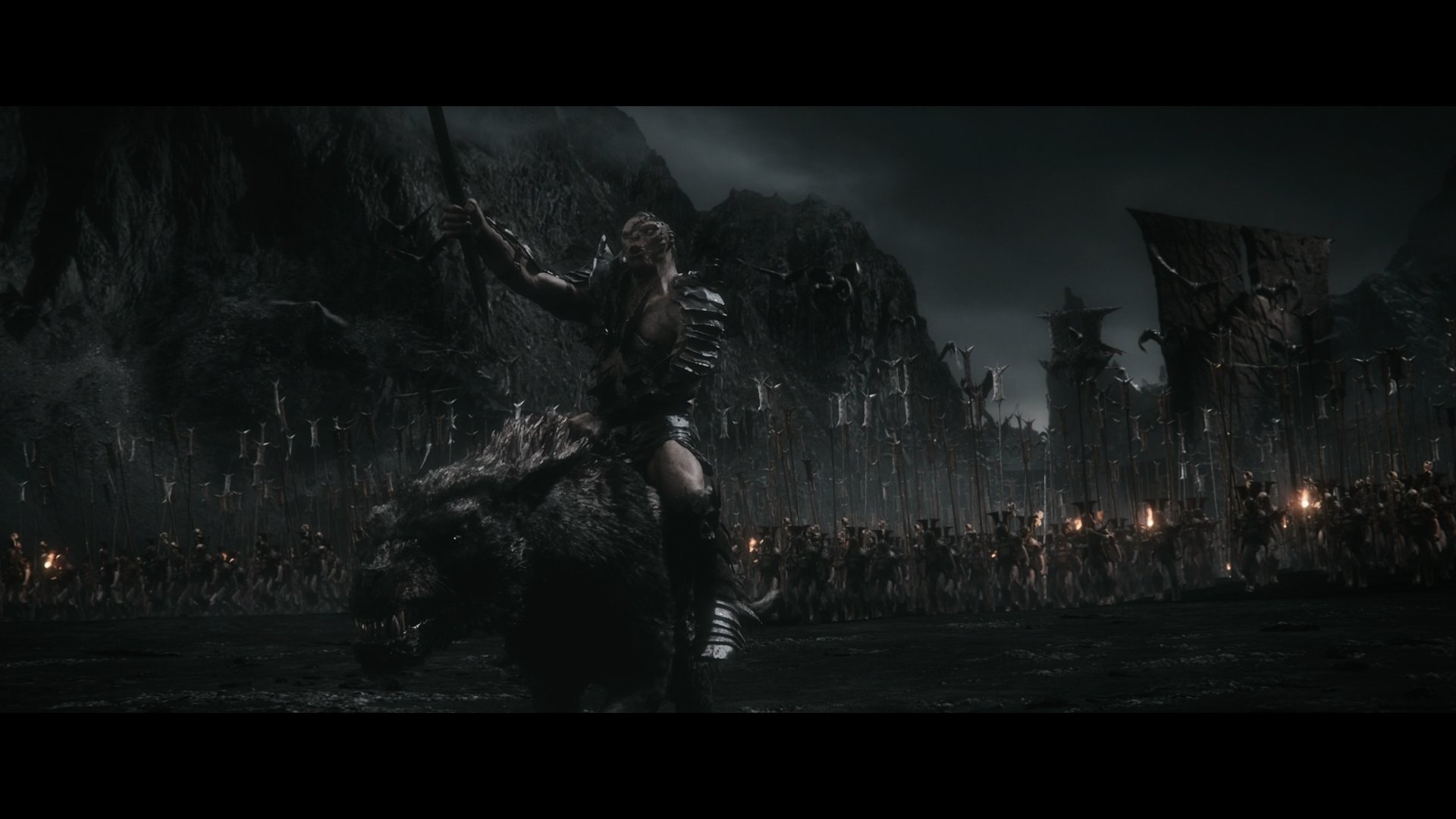 Castellan is an archaic word; it means captain of a castle or fortress. In the case of Bolg, he rules over Mount Gundabad in place of Azog. Bolg's duties while at Gundabad would include keeping a garrison at his fortress and reporting to his father on the progress in their preparations for a final war against the free peoples of Middle-earth. Ultimately, Azog orders Bolg to reinforce The Battle of the Fives Armies with the armies kept at Mount Gundabad, this is the fifth army to join the fray*.

The Castellan of Dol Guldur is another son of Azog, seen briefly in The Battle of Azanulbizar, defeated yet surviving; and he plays a part of Gandalf's capture at Dol Guldur. The giant orc was tasked to harvest the ring of power from Gandalf, however, before completing this task, he was annihilated by Galadriel.

*According to the film's interpretation of The Battle of the Five Armies, the five being: Dwarves from the Iron Hills, Mirkwood Elves, Refugees of Lake Town, Azog's army of Dol Guldur and Bolg's army of Mount Gundabad. In J.R.R. Tolkien's The Hobbit, the five armies are Dwarves, Men, Elves, Goblins and Wargs. Bolg of Mount Gundabad leads the goblin armies of the Misty Mountains, and an alliance with the Wargs of the Misty Mountains, who are under their own leadership. Traditionally, air forces are not counted as armies, so the Great Eagles and the bats from Mount Gundabad are not included in the count.

Learn more about Bolg in J.R.R. Tolkien's The Hobbit in The Thains Book. Thainsbook.net 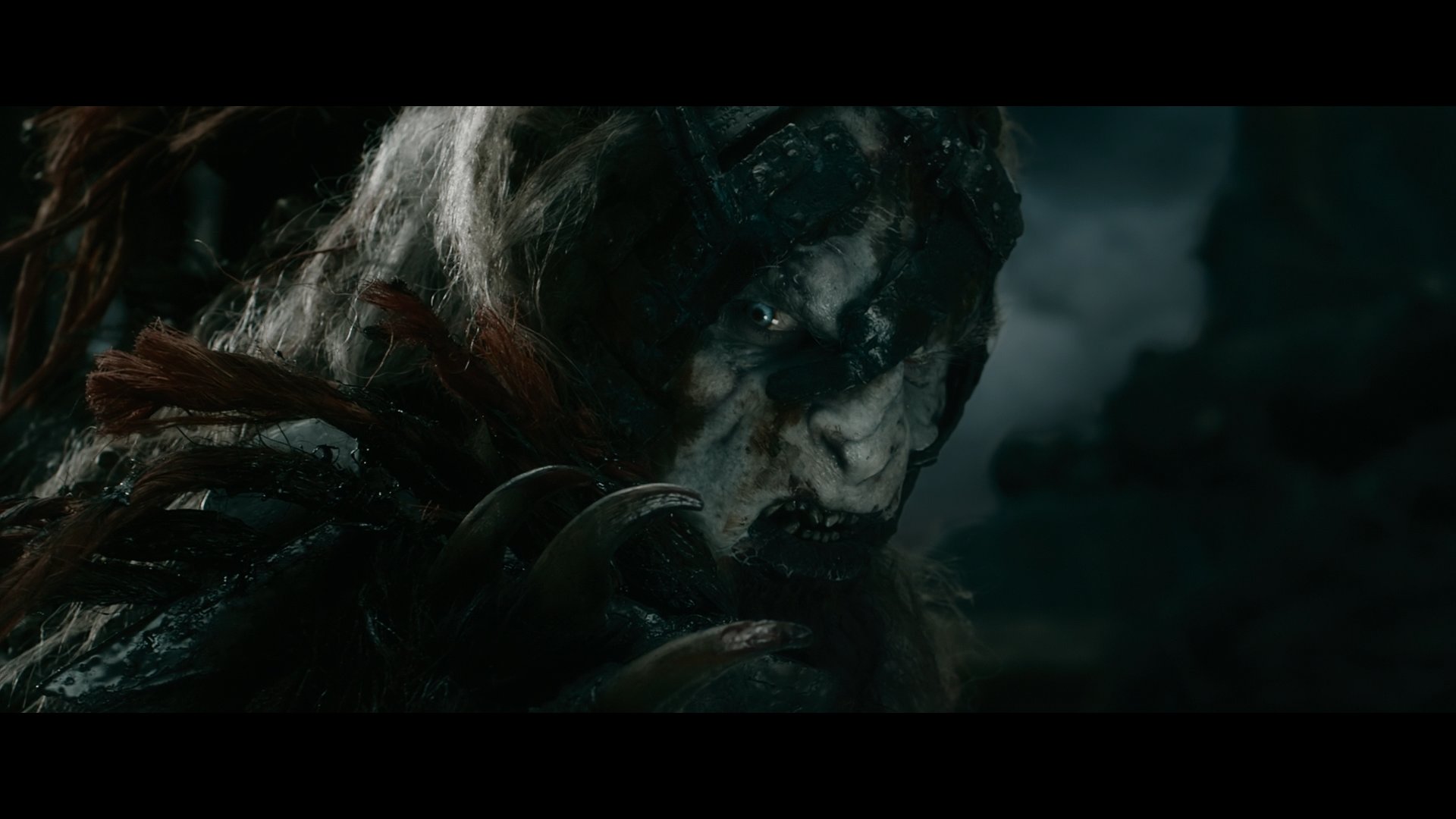 Thank you for reading. As always, find our most up to date information and media at The Third Age, Revora Forums. Forums.revora.net

Today we'll give you a preview of the long-anticipated sequel to our original campaign. Warning: this article will not contain real spoilers, but if you...

Age of the Ring Version 6.0

We have released Age of the Ring Version 6.0, featuring our new Woodland Realm faction, Erebor 2.0, our A.I. Overhaul, and much more.

Check out the Special Extended Edition Trailer for The Battle for Middle-earth II.

Why the Greatest Kingdom in Middle-earth is Unmappable

In this post, I will describe the technical difficulties involving the creation of an Erebor map for the Special Extended Edition, Director’s Cut.

3 player multiplayer map set in Rhûn for The Age of the Ring.

G'day fans of The Special Extended Edition. This demo was originally uploaded at The Third Age, Revora Forums in 2007. And to celebrate the revival of...

so hows the lotr bfme2 see Director's Cut mod coming along hope it comes out soon?

Hey Matt and Nazie
I downloaded the mod. yazneg fimbul bolg no:(

Because that version from 2007.

Please give your MoTY vote this year for The Age of the Ring.
Moddb.com

does it include the barad dur map?

Question, you showed these off but they ar enot in the game.
So I would like to know what's going on with it?

Love the mod. But why do all of the units take so long to recruit?

Today's update is for The Age of the Ring! Two mappers from Director's Cut (NJM and I) and one coder from the original S.E.E. (he working on the AI) are part of the AotR development team. So be sure to follow AotR since it's an active mod and if you want a spiritual successor to S.E.E. then this is it. =)

Who needs a version of the game for mód to work?

Use this guide and update to version 1.06. Check the troubleshooting section of the guide for how to play without a disk. Forums.revora.net