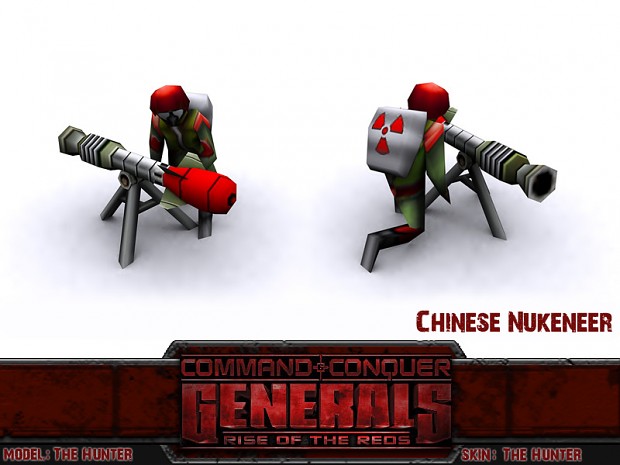 i was thinking they have been playing metal gear solid 3!

Nice. I sense another General bio is coming our way? :)

The new gen bio is already up in the forums.

Awesome name! Looks great, should be useful. Love the mention of our good old crazy nuke gen in the lore.

Can they garrison buildings or bunkers?

I think y'all are making the chinese too loose with nuke weapons.

I know I'm gonna get thumbs down for this.

Not really. Ultimately it's going to be unique to a general. Plus the nuke general in vanilla ZH and ShW were way more loose with nukes. Then in ROTR you need to spend a general's point to deploy nukes.

When I first read the name "Nukeneer" in the updates, I decided that it will be engineer with nuclear case!

"Hey buddy, I'm a nukeneer, and I solve problems."

This day is to be remembered

Yeah, but arc or straigh ahead trajectory? Or both? Can it get garrisoned In bunkers?

They can but they wont shoot out of them. This meaning they can get into any transport but may not fire from fireports and such. That would be nuts.

As far as its trajectory; your typical parabolic trajectory will do =)

In 2014, a seemingly innocuous train crashed a few kilometres outside Mudanjiang in the North-East of China. Moments later, the residents of the city outskirts were shaken awake by a bright flash and the sound of a massive explosion. The military was quickly dispatched to lock down the surrounding area and recover the wreckage whilst official Chinese news agencies merely reported of a conventional gas explosion. However, leaked internal reports later revealed the disturbing truth to the world: The train was actually carrying an entire arsenal of experimental sub-kiloton nuclear shells, designed for short-range tactical delivery by means of a heavy infantry mortar. Shockingly, the weapons were only equipped with the most basic safety mechanisms, one of which had now failed catastrophically. Colonel Tsing Shi Tao, the lead designer of the new weapon, quickly realised that this disaster could cost him his entire career. In a surprising move, the man who would later become a hotly debated figure for his liberal use of atomic bombs against GLA holdouts in Central Asia donned a protective suit and organised the entire recovery of the remaining shells himself from within the blast zone, averting what could have easily become one of the most devastating nuclear disasters in history. The development of the new warhead was put on halt, as it was deemed too unsafe even by its creator. Several years later, the young General Hu Tan Mau gave the project another chance and has recently adopted a revised version with improved safety features for use by his mortar operators, who jokingly refer to themselves as "The Nukeneers" for their drastic approach to practical problems on the battlefield.