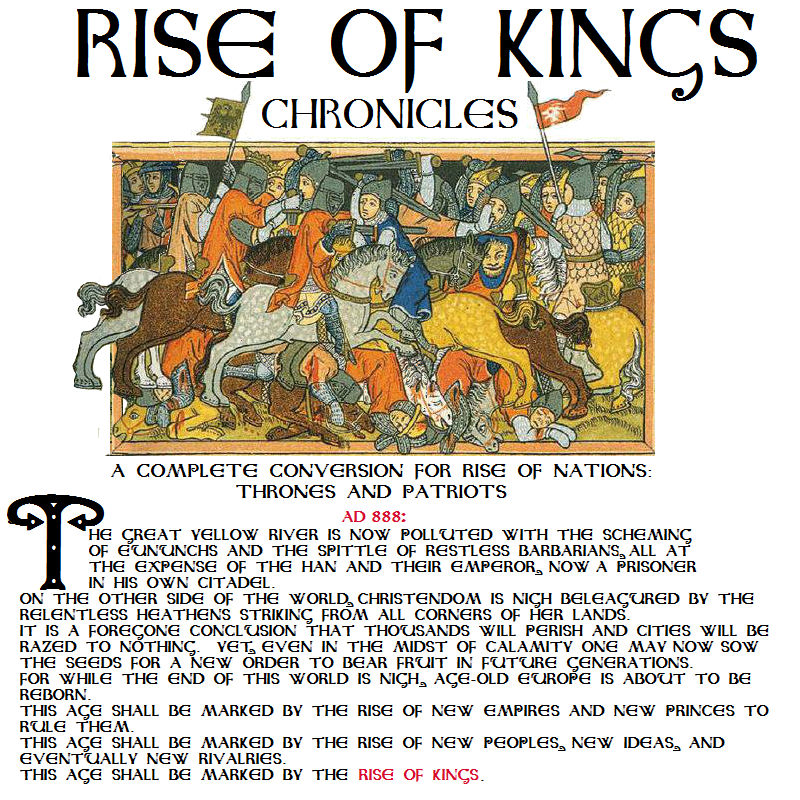 Thanks for voting and helping Rise of Kings on it's quest to become the 2021 Mod of the Year. You are now in with a chance to score some free games from our #modlove collection. Help this mod secure more votes by embedding the widget (or link) we have included below on your favorite sites.

Rise Of Nations The End Of Days Rise of Kings could well be one of the longest-running mods on Moddb, and has proven its worth thus far, but to be honest, we always felt that it would never be finished.

One of the problems with adding mercenaries to Rise of Kings was that due to how Rise of Nations is constructed, it's not easy having mercenaries shared over various different factions. In fact, some would say that the mercenaries of Rise of Kings are its main selling point. Moreover, it also felt ahistorical that as factions progressed socially and militarily, they would still be stuck using units which were woefully underpowered.

With this regard, we have started to introduce the concept of Obsolescence. Obsolescence is when European mercenary units cease to be as powerful as they ought to be because they are facing newer and more dangerous armies, and will have to be re-armed and integrated as the centralisation of civic and military administration takes hold.
With this regard, we formulated the following rules:

About five units to be affected by Centralisation have been identified:

The upshot of obsolensce by Centralisation is that if you still have any survivng mercenaries, they will receive the new training and provide you a one-shot group of modern infantry for use. This is useful especially for Venice, since Venice requires infantry to support its mercenary Stradiot cavalry.

Previously there was an issue with custom units where they would suffer from a darkening bug whenever they were made to turn about. We finally figured out what this issue was, and would be fixing it shortly.

At the same time, experiments with Age of Darkness have also yielded up secrets regarding how warships operate and how they are to function. We will also be fixing the animations for warships, which is something that many of you have frequently complained about previously.

Rise of Kings was always created with CtW in mind. To this end, it was decided to have two different CtWs, the Rise of Chivalry scenario that covers the period between the Treaty of Verdun and the First Crusade, and the Renovatio Europam campaign, that covers world history after the Black Death.
Rise of Chivalry is currently still in WIP as we are studying the feasibility of scripted events.
For more updates, visit Rise of Kings Wiki and check the "Campaigns" tab at the top of the page.

We are proud to announce that version 1.2 of Rise of Kings has been released! All 24 factions have been completed and most features have now been implemented...

List of new nations and who they replace, list of new buildings, wonders and some other features.

Patch for Rise of Kings, the medieval total conversion mod that brings many new features to Rise of Nations: Thrones and Patriots. Credits, installation...

Older version of the mod, download Rise of Kings 1.1!

We finally have a Patreon page:

Hope to see the updated ones soon and I hope there's for us playing the Extended Edition RON.

I have good news.
This mod has been undergoing some updating, and is being prepared for re-introduction back to Gold.

Great!!! Looking forward to it.

A new poll for users and players of Rise of Kings has been posted to faceBook:
Facebook.com

After careful consideration, Rise of Kings is now available as a Workshop download from Steamcommunity.com

Be careful though as there are still quite a lot of issues especially with icons as well as unit spawns not working as they should.

Finally got a Steam ed working. Its working site shall be
Moddb.com

Started checking out Steam. Unfortunately, it's as mentioned by one of the people here, directly using the mod folder as in Gold version will result in deformed icons.
The only thing we can do right now is to continue compiling everything first before exporting to Steam.

Rise Of Nations The End Of Days Rise of Nations: Thrones and Patriots