It was supposed to be easy for the Soviet Union leaders. By entering the Time Machine and eliminating Albert Einstein, they expected to just gain the upper hand over the Allied forces. It worked, but there were also consequences.

Their actions have spawned the threat coming from the East, the Empire of the Rising Sun. Or so they've thought.... As the three greatest powers fight the greatest World War in history, a new power emerges from the South. Forged from the abuses of fanatical Allied anti-communism that caused the most difficult period in their region, they come not from land, nor air, nor seas. They come from space. The Forth, the secret brazilian army, emerges from the moon and starts it's path towards the same goal all other factions vie for: Complete global domination.

Yet, this is little compared to what could be stored in the other side of the world, as this invasion could start another new enemy as well, made of rusty steel, cogs, smoke... and asian hats. There will come a time when Singapore and it's Liberation Militia will have to arise and gain the freedom they so deserved from the oppressive Empire-controlled Republic through force. Like ants emerging from the ground, great numbers of this lowest technological, but determined army will come from nowhere and challenge the great highly technologically advanced powers everywhere.

World War III was ugly. And it's gonna get worse.

This is the premise for Red Alert 3: Southern Rising. FIVE factions, each with insidious and deadly equipment, strategy and technology make the ultimate face-off in FIVE different campaigns, each with it's own start and course, all with the usual recipe for humor, treason, drama... and hot girls.

And that's not all we have in mind. New terrain tileset are being planned to introduce you right into the Forth's main yard, Nova Luna, or the foreign lands of Singapore, as well as we'll be adding three more AI's to complement the aggressive AVGN and SLIM manners of war and improve the current ones for a more challenging gameplay experience.

Check out the Mod Story for more details.


Forth and SLIM units, protocols and superweapons are available for public
sight. Check the features for more details.

A secret army, created in the backstages of the war at the Moon by the Brazilian military dictatorship through the use of borrowed resources from the Allies, who abused the entire South American continent in the past for it's continued anti-communism campaign. Forming an unlikely army of insane nerds and controlled by a few high-minded criminals, the Forth, while not being as strong as it's opponents, are the most versatile faction thanks to their adaptability to space. Using advanced saucer-shaped spacecraft, anti-gravity technology and lethal-at-any-range infantry, the Forth win through determination and early use of opportunity.

The Forth possess powerful air strength that can outmatch the Allies, excellent mobility, good protocols and strong infantry firepower. Their navy capacity is too limited and rely too much in numbers, like their vehicles. Build style is somewhat too inconvinient and slow as their tech rising method. Expensive advanced units.

Being caught during the very invasion of the Forth over the entire globe, one of the few other minor global countries that managed to resist the initial waves was Singapore, thanks to it's advanced stealth methods, methods that even overcome that the brazilian secret army possess. Despite the bravery and courage of this country's military, the militia created in response and intended in retaking it's country is clearly the one with the lowest technology, dating from the first Allied world war with the Soviet Union.

The SLIM, like Generals' GLA, is the lowest tech-army ever imagined, but not caught off-guarded. Possessing vehicle strength in numbers and a stable helicopter power is key to victory against the enemy, as vehicles are cheap and helicopters are very versatile. However, it has serious problems concerning very limited air power, weak strength, low power rendering, no attack animals and ridiculously weak naval strength. Ingenuous thinkering with machinery allowed them to construct some viable robotic equipment from this low technology, however.

The weapons are in place, the board is set. This is not a chess game. It's war. Enter it. WIN IT!!!


We are searching for concept artists, modelers/animators, skinners and map makers. If you wanna join us send a PM for Medici or Gen.Kenobi with this:

Full Name:
Nick Name:
Skill(what you want to do):
Country(for timezones purpose):
Picture of your work(you do not have to have one):

Foruns up and news!

People started complaining about our death. That never happened or will happen. Unlike many mods out there, we have a small team, that is involved, in the end of semester, with a lot of school activities. Now with the winter comming (at least here in Brazil) we have vacations. And we'll restart working as soon as possible.

Well, today i'll show for you a low-polyed version of Medici's RA-3 Sniper Automatic (AVGN Trooper) modeled by myself. 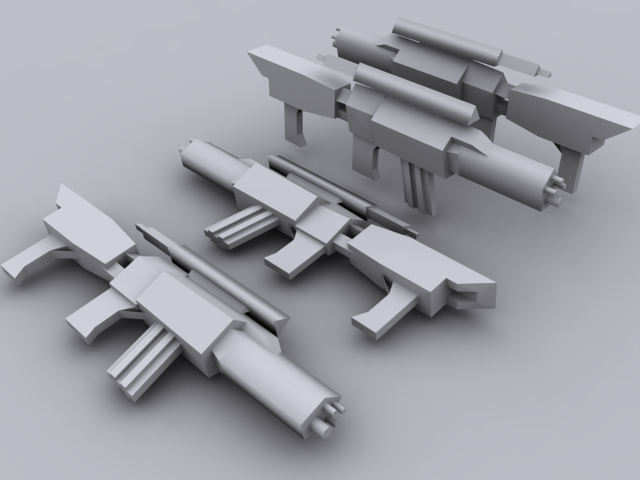 Well how you can see here, the model lacks some details, but that's not the purpose. This will be an infantry weapon, so it'll look really small on the battlefield, so with a good texture, the details will be up to RA3 standards.

I don't think ii can need to remember for you that we keep looking for:

That's all for today, thanks for your time and please visit us on the forums.

The Weekly Guess Games announced! 1st round is on.

Every week we're decided to let people have a guess on what they'll see next in our gallery. Each week I'll post a simple but un-revealing clue of what'll...

In order to keep functioning we need more people around here. Can someone help us please???

We got more things here than you asked for: Check it out!!!

F.A.Q 2 and concern about models

For the second part of the F.A.Q or the explanation about models i've been making, or both, please consult this.

I still have hope for this mod to come into existence, another 2 mods I have been watching out for are the Tech shuffle and Corona mods. If the Corona mod is successful enough I have plans for a sequel that would involve south america and the middle east if you still want this mod to come to life? Eclipse will continue this mod's legacy if it has truly died.

That and the unfinished Shock Therapy mod's improvements, Generals evolution for Civilians and Civilian Buildings, Tech buildings, Maps, the weather and animation graphics, and the revolution mod for certain upgrades would be excellent for helping your development for that project. But I don't know if the other mod developers are willing to share that easily without some kind of compensation or credit*?

*You'll most likely credit them but still some people can be picky with that.

This is being updated every year,be patient.

No. Particullary inactive, since the leader disappeared.