Tech Trees updated to version: 2.0. For global changes and all news you can read in PDF documentation and on 'News' image in images tab.

Tech Trees updated to version: 2.0.
For global changes and all news you can read in PDF documentation and on 'News' image in images tab. 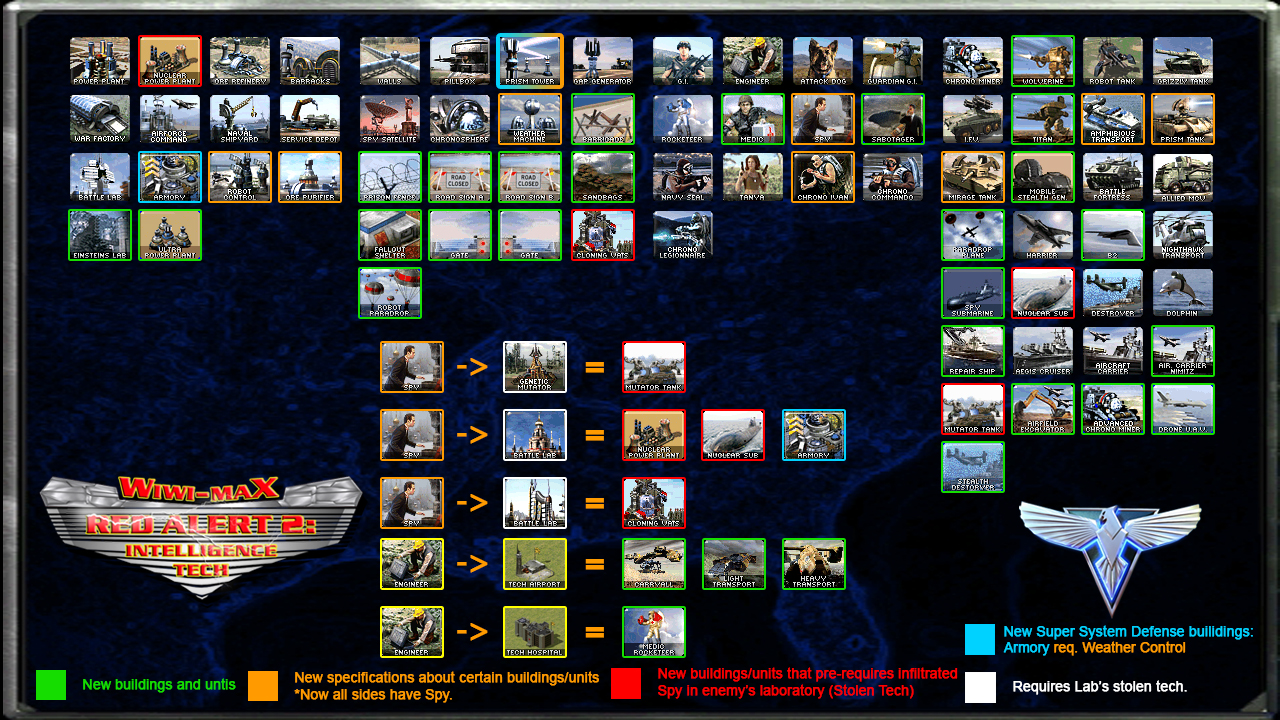 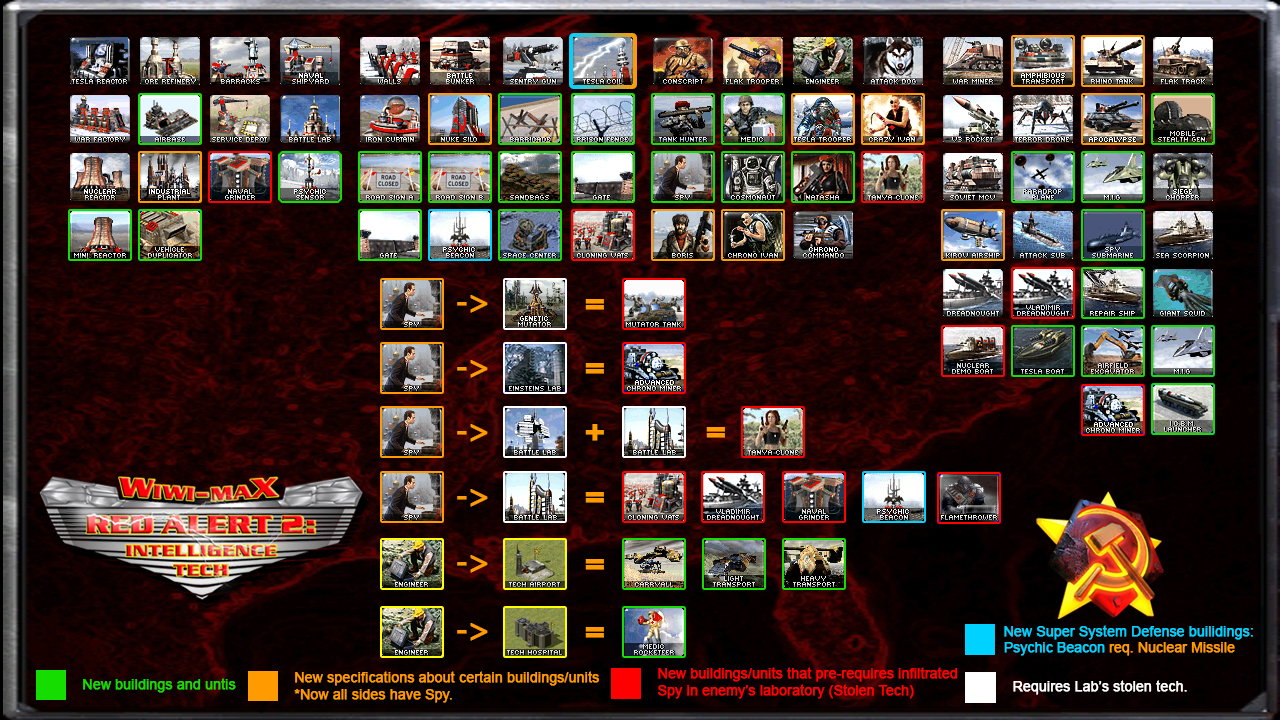 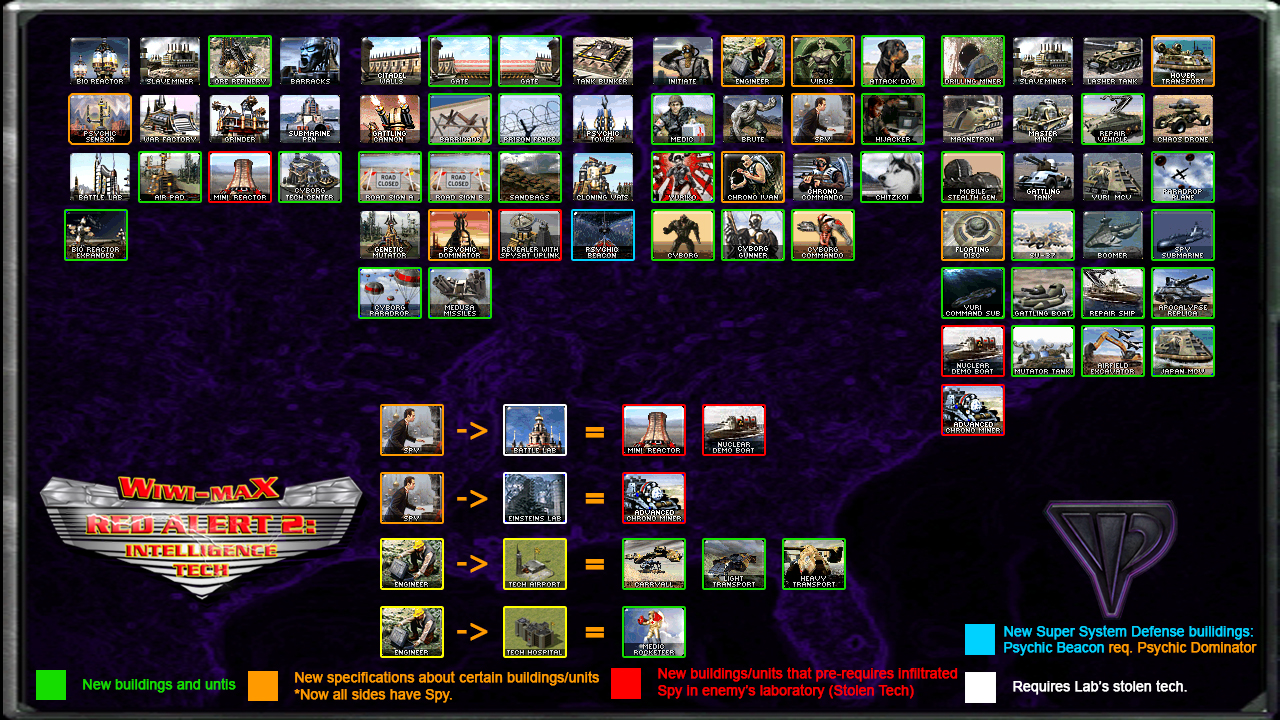 author,I find some display mistake:
In skirmish's country list show china as cuban,iran as libiya,tukey as iraqi,north korea as yuri and its loading picture is himiko in ra3 ,which means japan.

I also find a few things that I feel strange:
1.there is no ammunition volume as harrier plane on the cargoplane's model.I find it that if I use it attack first time when it is produced just then,it attack twice,then it neither go back to the airbase nor land on the ground,it just spin in the sky!Then I use the guard hotkey "S" to make it stay on the ground,and wait for a long time.Then it can attack 6 times and spin again.

2.The same plane's passengers, I mean the paradrop,the AI's paradrop is valid,but mine is only a iron!just click the paradrop iron and nothing happened then it just start to cool down again!Invalid self-contained paradrop,and aslo additional paradrop of the tech airport.

3.sometimes(exactly often):if a engineer in the enemy's side is controlled by me,he can't get into the china's duplicator sometimes.'

3.china:I can find the old soviet Psychic Beacon before,but when I start another skirmish,it disappeared form the list!

5.in allied ,a unit costs 1750 in the vehicle list,I forget its name,its building process can't be cancelled and it stop when the procession is nearly half.

6.the L.M. launcher's missle in north korean can be attacked by units that only attack to ground,when it just crash into the ground!If it's the designning purpose,I hope it may can't be finished by ground-to-ground units ,suck as the prism tower!

I'm outside ,my memory is not good enough,so I can't tell the object's full name,but I don't mean no respect.Hope your reply!

After finding the "clean" Yuri,the total just installtation,and try the combination of that "clean" Yuri and the equal "clean" Ra2,I don't see the enstein lab and the same level.the same use building in other camps again,neither the old soviet Psychic Beacon and some others,what I think should have been appearring then.
Totally sorry for what I "discovered" a few hours ago,but I still wonder,why I see things that are mentioned in the previous reply but disappeared in the totally clean installtation? I didn't install mods,and I delete *.ini and *.sav.Strange.

Well,the mod make the defense tower could attack either ground or air,but its POWER is too strong as a result(I mistake the attack range of the defense tower before).TESLA solder can pick off the air?sniper can attack to air?That's very instresting and creative!I find a lot fun in this mod,a mod that really exciting!

1. Cargo plane is not meant to be used for attacking at all, if you put infantries into it and sent the plane somewhere, you should use CTRL+click to "shoot" the passengers out with parachuts at that location.
This is the limitation of the game, same issue can be found when using caryall to "shoot" a vehicle via parachut on some location.

2. Problem is at your side, you've problem with working of the mod.
Probably "clean" status of the game.

3. Thank you for bug reporting, will be fixed.

3. (You have write 3. two times :) ) Soviet Psychic Beacon can disapear from the list in case if you lose some pre-req building as:
Nuclear Missile Silo, Soviet Battle Lab, or Soviet Construction Yard.
You must have all 3 structures from above how you can be able to see and build Old Soviet Psychic Beacon

5. Yes, that is any last ordered plane for build, because you have cargoplane "parked" on one airfield pad, if you send somewhere the plane, the progress will continue.

6. Prism can shoot anti-air (AA) so the missile of ICBM can be destroyed in the air by anyone who can shoot AA.

P.S. I'm glad that you enjoy the mod.