A random system exists now with the ability to spawn a mostly unique exploration experience.
Games of the era that have inspired me - Temple_of_Apshai , Gateway_to_Apshai , play Apshai trilogy , NetHack , Rogue , Sword_of_Fargoal

often operated in one of two ways. 1. use an algorithm to carve a random map out of an area, 2. pre-rendered maps stored on media

To date, most games in the Doom / Quake genre only use method 2.
I am aware of OBLIGE and SLIGE for doom

I got lead along the path to Quake-Hack by the map specs for the Chaos Mod.
When I wrote the descriptions I was inspired by RPG maps I had made previously.
Making maps like that with an editor is time consuming, and you can only make a map so large.

So I decided to see if a Quake map could be made with method 1 - an algorithm.

There is one major issue - Quake maps _must_ be precompiled. Mostly for lighting, but also bsp, and for sealed maps vis. What makes them solid.
It might be possible to bundle a map bsp compiler into the engine and do this on the fly. Thats more code than I want to bite off.

So, my plan was pre-compiled map "chunks" which I call "hacks".
A special QC function - "func_maphack" loads these chunks.

The algorithm is controlled by cfg scripts which store the relevant loading data in cvar strings.

The engine and QC are done and the system is working!
Right now I'm improving the "dungeon" experience - this plays like a typical Quake map.
The other possibility is "outside". This is something a Quake engine has never done. I believe this is possible and can be a new way to play Quake. However, this method has more "hill" to climb. 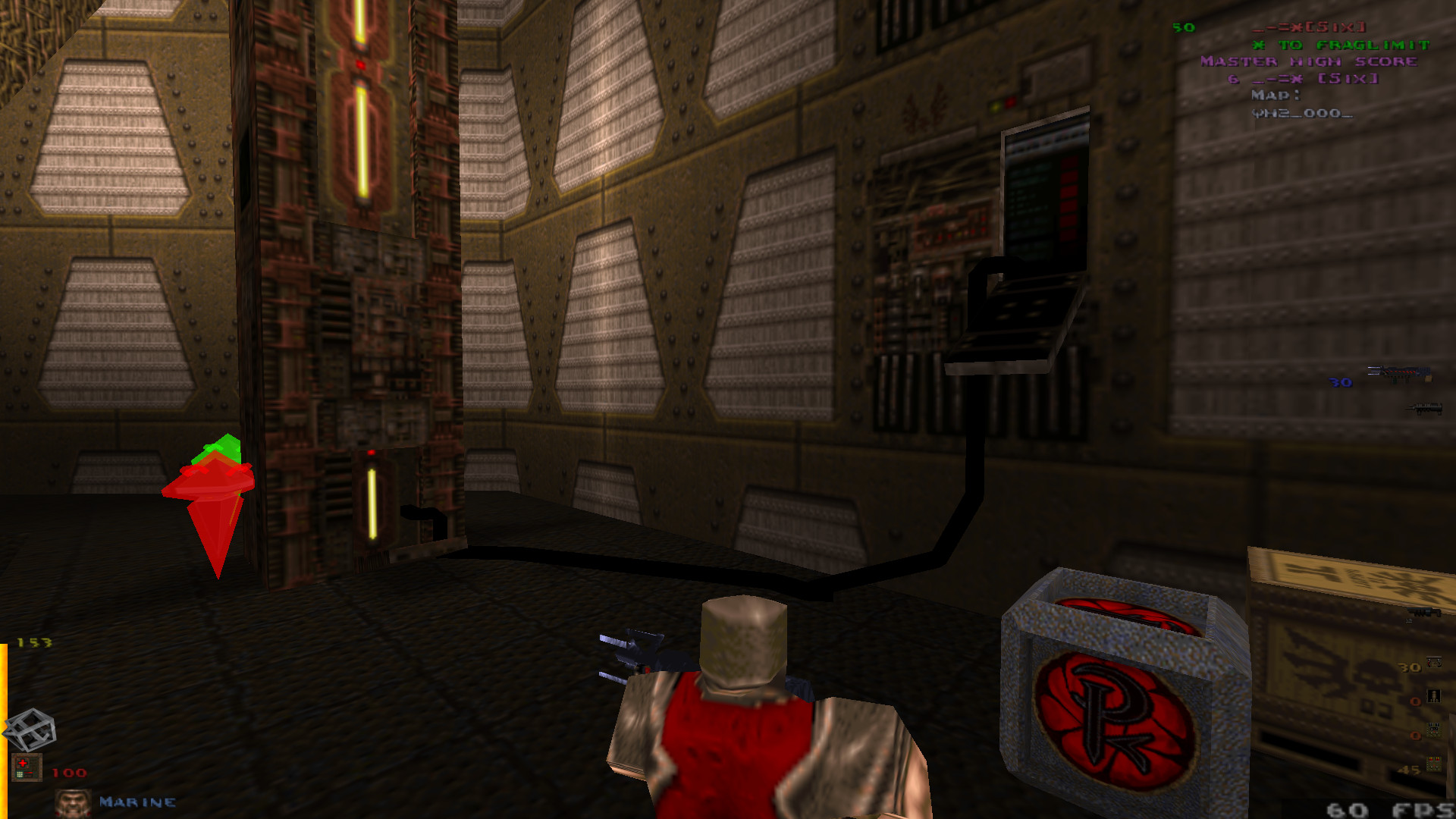 There are a few indoor issues to deal with. More exist with the outside map system.
When I say "mostly unique", as it works now there are not many chunks and it quickly becomes repetitive. I am seeking ways to keep play of repeated chunks fresh.

There are also various design decisions to be made.
This new system will change the Quake play style a good bit.
I am on the fence about having an endless "arcade" style dungeon vs. some kind of complete-able goal. 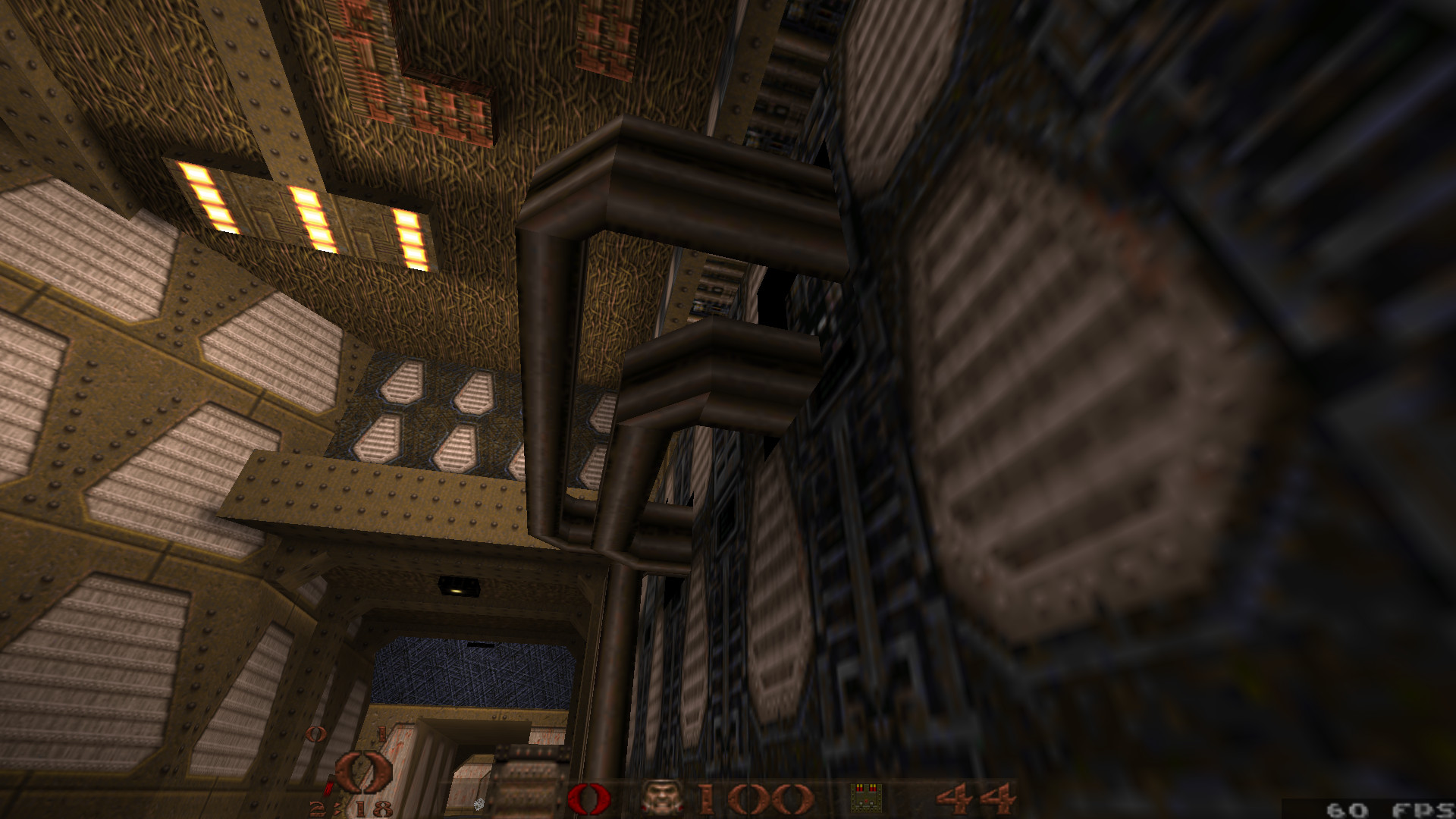 Stay frosty my friends, and Quake on!

Well penned article by James Long details much about the quest for better Quake C!

Quake <-- Nethack. Plays just like quake - without any wimpy breaks. Suck it up Marine!

What does this mod even do? And, what engine is required to run it?

in the last year I played this:
Store.steampowered.com

I have some new ideas !
an "in dungeon" play style based on that games operation

Love this mod! I was on the fence about trying to do a throwback shooter with randomized maps that basically aped Quake, but there's no point reinventing the wheel when stuff like this is possible. Ping me if you'd like some help making map chunks.

Following your qc tutorials for some time now. Thank you for your work. It helped me more than once.

You are most kind!

This warms me and provides much in the way of motivation.

I have a couple small bits to put on the forums.
When I find myself doing a lot of mapping, inspired qc tuts are not often there. Once I get back to code, I'll have a few more.

I have played the beta build. It's buggy and unpolished but It's an awesome concept ! I was afraid if it was cancelled but glad to hear that you are keep working on it. It can possibly be the best roguelike FPS that would blow any other roguelike shooters on steam.

I found that the map is consequently generated as the player moves, I think an endlessly going quake rather than beating the pre-generated map would be a nice and fresh concept. But You have to find a way to delete the previous chunks, The level and number of the enemies are keep incresing that it eventually gets laggy.

Yes, the beta was built on the early outdoors terrain system where chunks all have to be the same size. With that I did not want to delete areas as I wanted persistence for terrain. That setup was not a good match for the interior rooms...

I have a new "inside" dynamic corridor system now that makes a map much more quake dungeon style. There is a delete system. I am still working out a seamless way for deletes to integrate into a whole map. Another thing I want to add is some kind of boss room. Q1 had limited bosses, however.

One idea I had was the early rooms are mostly Q1 style. The further you go, the more new-ish stuff you encounter.
I'm working on the "base" theme right now.
Once I get enough built up to make a decent map I'll expand to the castle & blue wizard maps.
And a "buy stuff guy". I am drawn to add one of those.

I am back at this as well

Decided to adapt maphack to do something similar with quake
Depending on the fun factor, I may release a playable demo of this new mode

Recently I had another look at playing sounds in quake engines and modern ports. Most ports go straight back to the original source.

From what I saw sounds are allocated by play on a per entity basis.
They dont seem to be released or recycled in any way...

So, play enough sounds with enough entites and run out somewhere.

I'll look at sounds...eventually. Got some bigger fish to fry with map loading and frame rates.

What likely needs to happen is sound resources being released for freed ents engine side and by qc call. Maybe they are released and I just missed it. But if this runs long enough, silence...falls. lol.