Any voluntary donation will be more than welcome :) 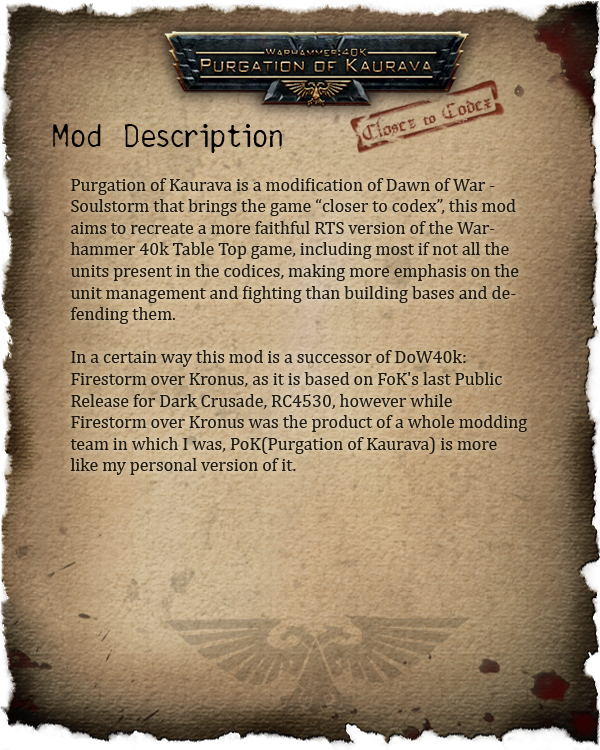 This is a solo project and only has one developer, although it has numerous contribution from other artists and all the content generated here its/will be free to be used by other in DOW1 mods without requiring permission with the only condition of giving proper credit.

If your game crashes a lot when playing big maps with lots of players then you will want to take a look here: Increase RAM usage Tutorial

Before unpacking, make backups of AI, Atrrib, and Scar folders just in case.

I wont be giving "tech support" about how to install this...if you're not sure how to do it, then dont bother with it and wait for the definitive PoK 1.54 which will come with an installer.

PoK Alpha 1.5 is out! It was supposed to be released both as a patch for Alpha 1 and a standalone version, however due to some technical difficulties...

Finally Grey Knight Terminators are being done :), this means that next alpha release will have a playable Daemonhunter Army, with most of its options...

This the 1st release of this mod, its an alpha and there a lot of stuff unfinished, also bear in mind this is an offspring of FoK 3.6 thus the similarities...

A Short List with the most top features of the Mod

Purgation of Kaurava Alpha 1.5.3 Code in Luas This can be useful for other modders who might want to make deep checks in the PoK code

A more stable version of the previous 1.5 but with many bugfixes such as Chaos Zealous trait Greater Daemons, SM captain armour upgrade, full support...

Purgation of Kaurava Alpha 1.5 (v0.0.1.5) For more details check the news section PoK 1.5 article. Special Thanks to Bloodtitan who took the time to upload...

Go here for this mod's successor (sort of)
Moddb.com

is this mod also dead

I'm so surprised this mod haven't got a community rating.

Help: how do orks increase numbers and population cap

Whenever I start a game in skirmish I do not get any req income.
I have so far tried using this with all races and most of the game modes and I cannot seem to get it to work, Any ideas on this?

When i started the game. The Camera angle was very up right and all units/everything was narrow. pls help.

Nvm i fixed it.

Update? Where? Nothing new was posted. :|

For some reason it showed up as having been updated on the list of mods. =(

Indeed.. ModDB has a tendency to say there is an update, then I look, well, no project update so its a ruse. :(