Hello everyone, I present to you a new Project for HOI4 that Occur in the Future, or Rather in 2120... 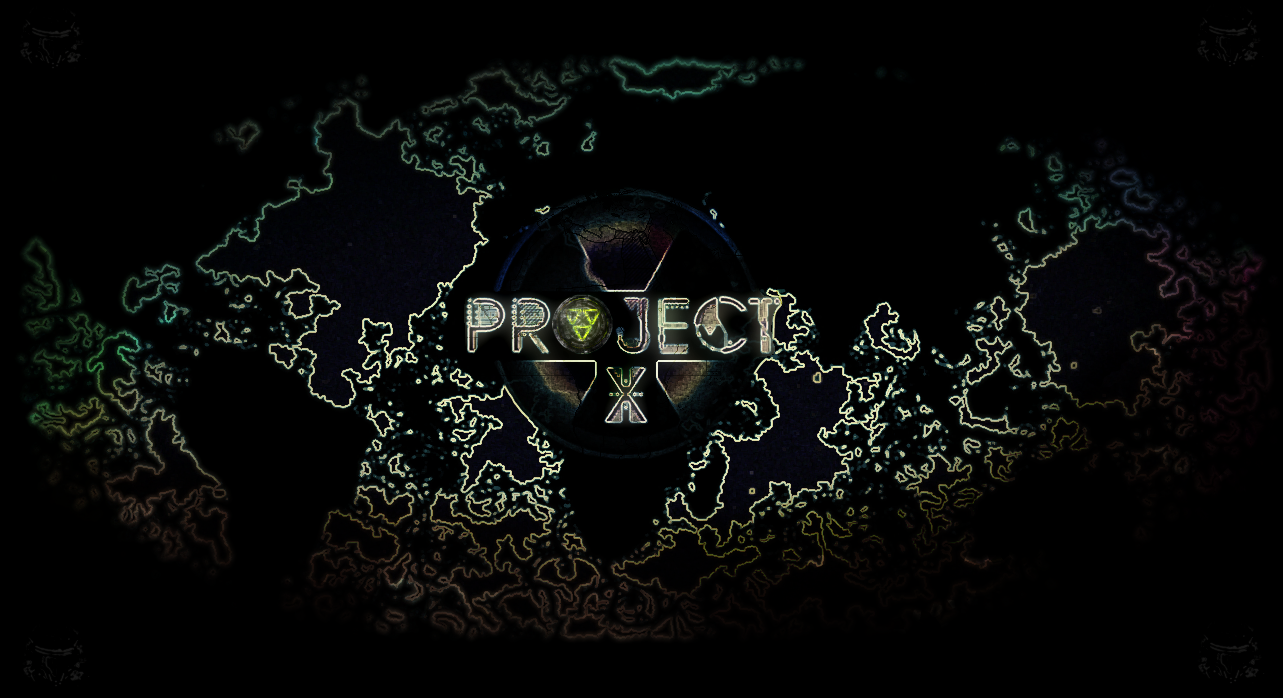 Imagine a world, a world where the cold war never occurred after the Second World War, a world where politics has branched off from what we know today? What if the Soviet Union and America began to cooperate after the Second World War? With a new Political party dominating American domestic Policy there never was hatred towards communism as there was in our world, but that hatred which didn't come now shall arrive a hundred years from now! The world was struck by a depression greater than ever, with prices plummeting across the board, oil running dry and technocrats dominating behind the scenes, the world was plunged in an all-out cold war! Short-lived but devastating the world will never be like it was before, with the rise in power of the European Commonwealth and the PRC hungering for more power the superpowers of old are being challenged, what awaits us in the future? Will it be all out nuclear war? Another cold-war? Or a revolution by technocrats on a scale never seen before? We are not to tell that story, that story is for you to tell, the year is 2120, a world full of possibilities awaits...

(Technical notes: Introducing totally new systems for rioting and geo-political leaning, new tech trees and branches, brand new states and provinces, new buildings and Skins while also new focus trees and events! We are here to revamp and create the best futuristic mod for HOI4, a challenge we shall face and a challenge we shall see till the end). 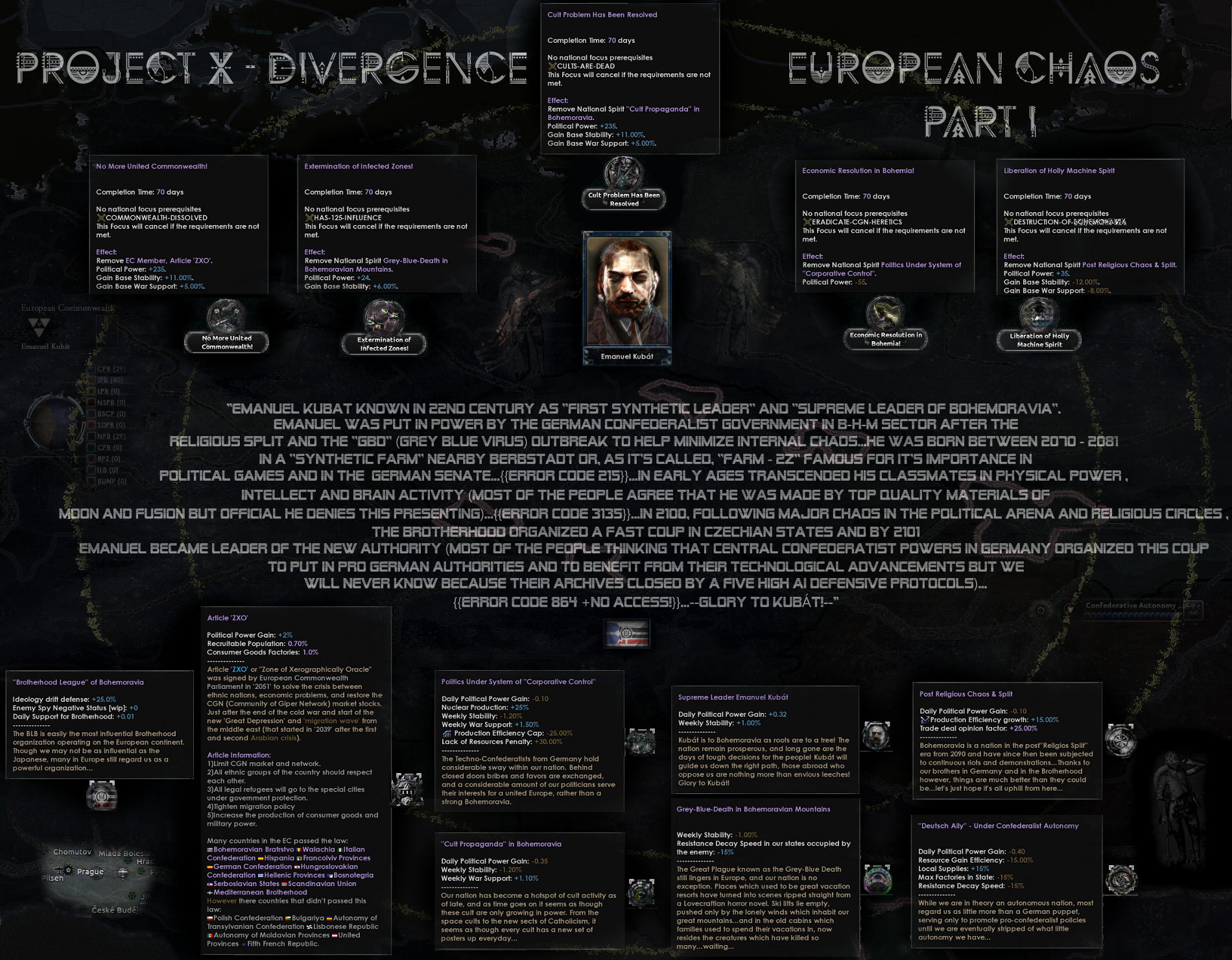 The Team is looking for new members and helping hands. Feel free to apply for a developer on our Application/ Discord.

Thanks to our Devs that helped with this trailer: Stalker#2457 - Creator of this Trailer, Compass#9703 - Providing a great resource pack, Blakil#4860 for providing voice record and event scripts. Visit us on Discord: Discord.gg

Join our team to see more of our content, be part of most ambitious project and help our creator with development!: Forms.gle

Instability across the Atlantic federation, threatening to tear what little unity remains to shreds. Though the Confederalist regime has stood firm in North America for 70 years, the government has become indecisive about a number of crucial matters. From the religious radicals, the rise of AI, and countless other issues still sitting on congress's back burner. Ever since the loss of Hawaii due to the AI revolution in 2075, the Japanese Brotherhood have become increasingly threatening to our sphere, among these Brotherhood technocrats, one individual in particular has been causing a substantial amounts of issues on the West coast. ALAZAR, though info on the man himself is scarce, over the years our special; services have confirmed his affiliation with the Brotherhood and has evidence linking him to a multitude of terror attaks on both military and civillian targets across the West Coast.
From Europe, The Grey Blue virus has crossed the ocean and since then has been sinking its claws across our whole federation. Cities in the north have been reduced to ghost towns, and graveyards are becoming larger every day as 100s are killed to prevent the spread of the virus...their caskets of course carry only ashes.

At home, Regional autonomy zones continue to deviate from federal law, raising their own armies, and in some cases even declining orders sent from Boston. The most troubling of these zones are those in the Great Lakes Region, the Pacific Coast, and those of the Brotherhood, located in old Washington DC, just on the footsteps of the Federation's Capital. Of course, these are only the autonomy zones close to home. If one looks beyond the Rio Grande, the chaos becomes even more palpable. Orators are calling to the people to take up arms against us, calling for our garrisons to leave what is supposed to be their own land. The industrial workers protest our native corporations. Even the Rainforests in the Caribbean have gone from luxury resorts to guerilla hideouts. Let us hope nothing drastic will happen before we get the chance to decide on a resolution....
In Boston, the heart of the federation, riots on an unprecednted scale fill the streets, the national guard keeping what little order it can while waiting for the eventual order from congress to fully CRACK DOWN on the rioters.

Even on the Congress floor, money is changing hands, and politicians have gone from representatives of the people to representatives of the rich. That does not mean there are not thse still loyal to us however. So long as we eliminate bad seeds before they are given time to sprout, and nurture those who want the same things we do, we can ensure we will not have to stoop so low as corruption to ensure our will is done.
Perhaps the most troubling of all these however, are reports from the Midwest - a region home to some of our most advanced synthetic farms and research facilities - detailing a growing cult of religious fanatics, with roots in the religious split which occurred decades ago. We can not simply move these facilities, and so we must remain weary and ensure this cult does not reach a point where it can threaten our own national security...

The time for decicive action is now, some rules will have to be bent, some people will have to be shot, but so long as the Federation holds, it will all be worth it...right?

Introducing totally new systems for rioting and geo-political leaning, new tech trees and branches, brand new states and provinces, new buildings and Skins while also new focus trees and events! We are here to revamp and create the best futuristic mod for HOI4, a challenge we shall face and a challenge we shall see till the end.

Lore diary , the origin & original story about a creation of pxd universe...

Hello subjects, today i am publishing an new dev diary about germany, enjoy!

when does this mod come out???

End of this year my friend)

Hello, I am from Argentina, I have been following this project for a couple of years and the truth is that I see it better and more advanced every time. I wish you the best of luck.

We Arabs hope to talk about their advantages inside the game, please

In the project it's a big story and a lot of new stuff happened.

Do the Arabs, and Egypt in particular, have a major role in the in-game updates?

Of course! there was a lot of changes since 1950